The city also reported 114 patients admitted to the hospital, which remains under the city set threshold of 200.

The city’s infection rate on a seven-day average is 3.33%, he tweeted Friday.

The mayor urged residents to wear a mask, get tested and "help us push back this second wave.”

The NFL’s Denver Broncos confirmed in a statement Friday that a player and two staffers have tested positive for Covid-19.

The team has canceled practice and closed its facility and will continue preparations for Sunday’s game virtually.

In the statement, the team indicated it is working closely with medical experts and the league office and “will take all steps necessary to ensure the well-being of the players, coaches and staff.”

The 4-6 Broncos are scheduled to host the 8-2 New Orleans Saints on Sunday.

Hospitalizations due to Covid-19 in El Paso, Texas, are decreasing, according to health officials, with the lowest number of patients hospitalized since October.

The El Paso City and County Health Department reports that 907 patients are currently hospitalized due to the virus, down from a peak of 1,148 on Nov. 11. It's also the lowest number of hospitalizations since Oct. 28, when 908 patients were in hospitals due to Covid-19

There is just one confirmed death reported on Friday, bringing the total number of deaths to 919. The El Paso dashboard shows that 529 deaths are currently under investigation.

El Paso is reporting 678 new cases on Friday, bringing the total to 84,683. The dashboard shows that 37,058 of those cases are currently active.

Note: These numbers were released by the El Paso City/County public health agency and may not line up exactly in real time with CNN’s database drawn from Johns Hopkins University and the Covid Tracking Project.

Thanksgiving is typically a light travel day, but Thursday’s number is 65% lower than last year.

At least 1,591,158 people were screened by TSA last Thanksgiving.

The US Centers for Disease Control and Prevention recommended last week that Americans should not travel for Thanksgiving, and posted updated guidelines for safely celebrating the holiday.

North Korean hackers are suspected to have carried out a cyberattack against British coronavirus vaccine developer AstraZeneca in recent weeks, Reuters revealed Friday citing two unnamed sources with knowledge of the matter.

According to Reuters, North Korean hackers posed as recruiters on networking site LinkedIn and WhatsApp in order to approach AstraZeneca staff — including those working on coronavirus research — with fake job offers.

The suspected hackers then sent documents – some using Russian email addresses – purporting to be job descriptions that were in fact laced with malicious code designed to give the hackers access to the victim’s computers, Reuters reported.

According to Reuters’ sources, the hackers are not thought to have been successful.

While AstraZeneca has declined to comment on the matter, the University of Oxford — which is working in conjunction with the drugmaker to develop a coronavirus vaccine — told CNN in a statement that the university is working closely with the UK National Cyber Security Centre (NCSC) to ensure its protection.

“Oxford University is working closely with the National Cyber Security Centre to ensure our COVID-19 research has the best possible cyber security and protection,” a university spokesperson told CNN.

The NCSC has not directly commented on the matter, but told CNN on Friday that it is “committed to protecting our most critical assets, the health sector, and crucial vaccine research and development against threats.”

CNN has reached out to the Democratic People's Republic of Korea’s mission to the United Nations in Geneva for an official comment, however has yet to receive a response.

In a telephone conversation with CNN, a member of staff at the mission said the Reuters report is “fake news,” alleging that the information has been “fabricated.”

The reporting comes after a South Korean lawmaker said the country had also thwarted North Korean attempts to hack its own pharmaceutical companies working on coronavirus vaccines.

Speaking on Friday, lawmaker Ha Tae-Keung did not say when the hacking occurred or which drug companies were targeted, but confirmed North Korea has made attempts to hack South Korean pharmaceutical companies that are developing local vaccines for the coronavirus.

Black Friday got a pandemic-induced makeover this year, with many major retailers starting their sales earlier than ever and ending them later.

Companies are hoping to avoid the crush of customers that crowd stores on the Friday after Thanksgiving by giving them more buying, pickup and delivery options.

This year, the Black Friday deals that are usually reserved for in-store shopping will appear online during the month. Nearly 51% of shoppers feel anxious about shopping in-store during the holidays and 64% of their budget is expected to be spent online, according to a new shopping survey from Deloitte.

And those who are brave (or crazy) enough to hit the stores on Black Friday will notice enhanced safety protocols and capacity controls.

Here's how major US retailers changed their Black Friday plans this year:

Read more here about the measures retailers are implementing.

George H. Carley, age 82, the former Chief Justice of the Supreme Court of Georgia, died late Thursday night from Covid-19, according to a statement from Chief Justice Harold D. Melton.

Carley passed away on Thanksgiving day around 11 p.m. at Emory Decatur Hospital, according to the statement.

"Justice Carley was appointed to the Supreme Court of Georgia in 1993 by then-Gov. Zell Miller. In May 2012, he was sworn in as the 29th Chief Justice, serving as leader of Georgia’s judicial system until Dec. 31, 2012, when his term in office came to an end," the statement said.

Besides his family, Carley loved two things: the Georgia Bulldogs and the Court, the statement said.

“We are devastated by the loss of Justice Carley, a beloved friend and colleague to so many of us,” Chief Justice Melton said. “Our thoughts and prayers are with his wife, Sandy, his son, George H. Carley, Jr., and his two grandsons,” said Melton.

The UN's migration agency, the International Organization for Migration (IOM), has called on governments not to forget migrants as they start to plan coronavirus vaccination programs.

Dr. Jaime Calderon, a senior regional health adviser for the IOM, told a meeting of the South-Eastern Europe Health Network that migrants should be factored into public health and vaccination plans.

“Vaccines are among our most critical and cost-effective tools to prevent outbreaks and keep communities safe and healthy,” he said, according to an IOM news release Friday.

“For everyone to thrive, countries must intensify efforts to ensure that no one is left behind and all migrants — no matter their legal status — have access to the life-saving benefits of vaccines.”

The South-Eastern Europe Health Network links countries including Albania, Bosnia and Herzegovina, Bulgaria, Montenegro, the Republic of Moldova, Romania, Serbia and North Macedonia, each of which is a source country and increasingly a transit country for migrants, the IOM says.

"Some 30,000 migrants passed irregularly through the region this year, about the same as previous years, despite pandemic restrictions," the news release said.

“This is bad news for the tens of thousands of migrants in the region,” said Calderon. “All too often, migrants encounter obstacles in accessing health services — due to language and cultural barriers, fees they cannot afford, and lack of inclusive health policies.”

It is the morning after the Thanksgiving holiday in the United States, and the coronavirus pandemic continues to surge across the country and is showing no signs of slowing down.

If you're just reading in now, here are some of the latest Covid-19 trends and headlines in the US:

Here's a look at where cases are rising compared to the previous week, according to Johns Hopkins University data: 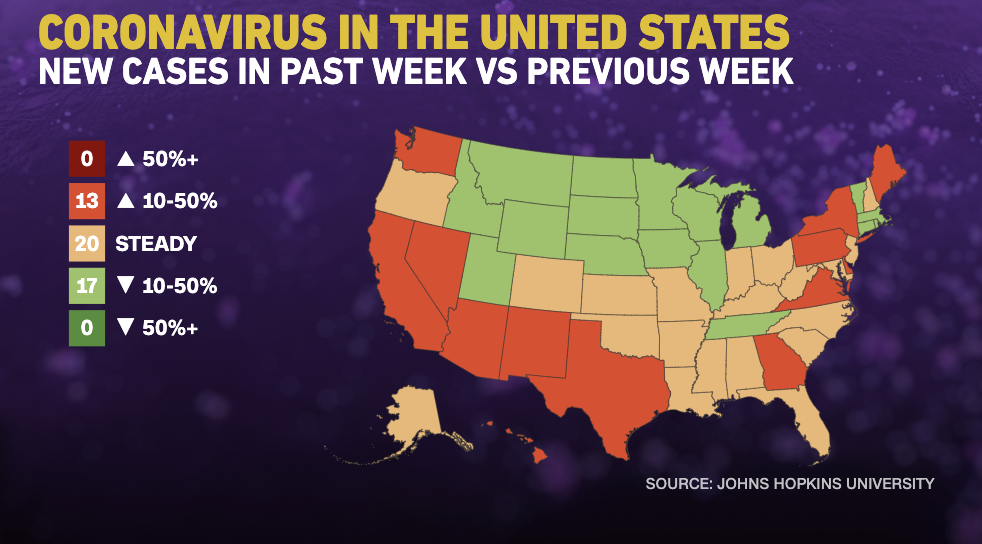