Georgia Gov. Brian Kemp extended the state’s health emergency and Covid-19 restrictions for another 15 days, according to a release from his office.

Part of the executive orders signed today include changes that allow nurses and pharmacists to administer the pending Covid-19 vaccine, including in a drive-thru setting, and permits any nurse or pharmacist to observe patients for the requisite 15-minute window after receiving the vaccine.

The latest extension runs through Dec. 15, the release said.

Asked about his expectations regarding how many Americans will be vaccinated against Covid-19 by June, Lt. Gen. Paul Ostrowski, director of supply, production and distribution for Operation Warp Speed, said, “A hundred percent of Americans that want the vaccine will have had the vaccine by that point in time.”

“We will have over 300 million doses available to the American public well before then,” Ostrowski told MSNBC’s Yasmin Vossoughian on MSNBC Monday afternoon.

About the vaccines: Pharmaceutical company Moderna intends to apply Monday to the US Food and Drug Administration for authorization of its Covid-19 vaccine.

Moderna will become the second company to apply to the FDA for emergency use authorization for a coronavirus vaccine. Pfizer applied on Nov. 20 with data showing similarly high efficacy.

The FDA is scheduled to meet with its Vaccines and Related Biological Products Advisory Committee on Dec. 10 to review Pfizer's application and on Dec. 17 to review Moderna's application.

Senate Majority Leader Mitch McConnell urged Congress to pass another round of coronavirus relief before the end of the year and accused his Democratic colleagues of stonewalling and playing a losing game of politics with the desperately needed aid.

In his first floor speech after the Thanksgiving recess, the Kentucky Republican said that while passing legislation to fund the government beyond the December 11 deadline, authorizing defense spending and confirming federal judges remain priorities for the Republican-led chamber, "there's no reason, none, why we should not deliver another major pandemic relief package to help the American people through what seems poised to be the last chapters of this battle."

In light of positive vaccine development news, McConnell expressed optimism that "victory over this pandemic is not far off," but adding "a huge amount of work remains before us."

He said Congress will need to continue to ensure that the federal government has the funds needed to distribute vaccines nationwide, and he noted that some part of the CARES Act have "run dry" since March, with others due to expire in the coming weeks.

"We Republicans have spent months trying to renew important help and provide even more," McConnell said, citing the Senate Republican package that was blocked by Democrats earlier in the fall.

McConnell accused House Speaker Nancy Pelosi and Senate Minority Leader Chuck Schumer of playing politics with Covid-19 relief and engaging in "all or nothing obstruction." But he said this backfired when Democrats lost several House seats in the November election.

"Now it's abundantly clear to everyone that the Speaker will not be getting to fundamentally transform American society in a socialist direction in exchange for more bipartisan relief. The hostage taking was never going to work," McConnell said.

McConnell noted that some Democrats have been anxious to pass further relief and framed his party's own proposal as an ideal template for further relief that could pass on a bipartisan basis.

McConnell also cited Obama administration economic advisor Austan Goolsbee, who told CNN's Manu Raju on Sunday that congressional Democrats should accept a “half loaf” for now if they can’t get Republicans to go along with a bigger package because the stimulus is needed badly and Democrats could pass the other half early next year.

"Let's hope our colleagues at the top of the Democratic Party can finally hear their own members and stop blocking the common sense, multi-hundred billion dollar measures that Republicans have been ready to deliver for months," he said.

The Oklahoma City Thunder announced Monday that the team will begin the 2020-21 NBA season without fans in attendance at home games due to rising Covid-19 numbers in Oklahoma.

The news comes after the Thunder announced earlier this month that “a limited number of fans and guests” would be allowed to attend games and other events at Chesapeake Energy Arena.

“For months, we have worked in close collaboration with Chesapeake Energy Arena, the City of Oklahoma City, local health officials, and the NBA to put into place thorough health and safety measures to allow for reduced seating capacity,” the Thunder said in a statement. “However, as we review ongoing and concerning trends in COVID-19 cases and hospitalizations in Oklahoma, we want to exercise an abundance of caution to help control the spread of the virus in our community. Therefore, the Thunder has made the decision to begin the season without fans in the arena.”

The team said it will continue to monitor the situation to determine when fans may be able to begin attending Thunder home games.

The Thunder’s announcement follows a similar decision from the Charlotte Hornets, who announced earlier on Monday that they would begin the NBA season without fans in attendance for homes games.

Nearly 1 in 4 people hospitalized in Wisconsin due to Covid-19 are in intensive care units (ICU), the state's health department said on Monday.

The Wisconsin Department of Health Services reported that 16% of the state's staffed hospital beds are currently available, as over 1,800 patients are in the hospital due to the virus.

Note: These numbers were released by the state's public health agency and may not line up exactly in real time with CNN’s database drawn from Johns Hopkins University and the Covid Tracking Project.

There have been at least 13,457,294 cases of coronavirus in the US, and at least 267,438 people have died, according to data from Johns Hopkins University.

Here's a look at how United States' figures compare to other countries: 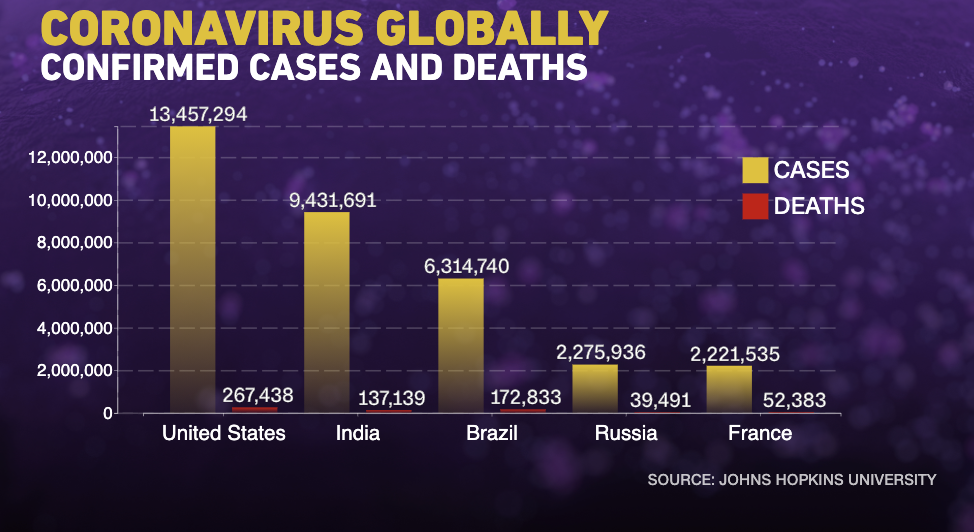 The number of people hospitalized for Covid-19 topped 5,000 in Ohio for the first time Monday. The state's Department of Health says there are 5,060 coronavirus patients in the hospital, with 1,180 in intensive care.

Ohio officials say 71% of all hospital beds are occupied, and 76% of intensive care unit beds. The state has averaged nearly 8,000 new cases per day over the past three weeks. The seven-day rolling average for Covid-19 tests coming back positive is 14.5%, nearly three times the figure recommended by the World Health Organization for reopening the economy.

Even Monday’s alarming numbers may not be telling the full story. The state says thousands of reports are still pending review due to “unprecedented volume.”

Note: These numbers were released by the Ohio Department of Health and may not line up exactly in real time with CNN’s database drawn from Johns Hopkins University and the Covid Tracking Project.

Florida Gov. Ron DeSantis doubled down on not issuing a statewide mask mandate in the Sunshine State Monday during a press conference.

When a reporter asked DeSantis if he had reconsidered a statewide mask mandate, the governor got testy with the reporter and answered with a series of his own questions.

“How has that worked in states that have done it? Has that stopped an outbreak in Minnesota, Illinois, Michigan? What about New Jersey? What about all these states where you have explosion in cases?” DeSantis said. “I’m opposed to mandates, period. I don’t think they work.”

As Covid-19 cases in Florida are inching closer to the one million mark, DeSantis touted that the increase in cases in other states are “way, way more.” DeSantis said that shutting down has not worked to stop the spread of the virus in other places.

The New England Patriots were fined $350,000 by the NFL for violations of the league’s Covid-19 protocols in early October. A league source confirmed the fine to CNN Sports.

The fine comes after the NFL determined that the Patriots violated the league’s policy that all team personnel must wear masks while at team facilities.

After the team’s quarterback Cam Newton tested positive for Covid-19 on October 2, the NFL postponed the Patriots’ game against the Kansas City Chiefs from October 4 to October 5.