Dr. Henry Walke, the US Centers for Disease Control and Prevention's Covid-19 incident manager, said that as Americans continue through the holiday season, they should avoid travel and stay home.

“We’re happy we’re coming out with this guidance now before the holiday season to provide additional consideration for the American public and health care providers, public health administrators to think through in terms of preventing infection,” Walke said Wednesday.

“Our hope is before Thanksgiving, and now before the upcoming holiday season that people hear a message about avoiding travel, staying at home, and protecting themselves, especially now,” he continued.

The reason for the recommendation to avoid travel is that cases are rising and hospitalizations and deaths are both increasing, Walke said.

“We need to try to bend the curve, stop this exponential increase and so we’re really asking the American public to prevent these infections and avoid travel and wash their hands, wear a mask and maintain distance,” Walke said.

Another 712,000 Americans filed for unemployment benefits last week on a seasonally adjusted basis, according to the Labor Department, as the job market recovery continues to slow. That was a bit lower in the previous week, which was revised higher.

Meanwhile, 288,701 workers filed for benefits under the Pandemic Unemployment Assistance program, which provides aid for workers like the self-employed and contractors. This number is not adjusted for seasonality.

Thursday's report comes just days after the US Government Accountability Office said that the Labor Department hadn't provided an accurate estimate of the number of Americans claiming benefits. States' backlogs are overloaded with the historically high number of applications, which is contributing to this issue.

On top of that, millions of people may not be receiving the full unemployment payments they are owed, GAO said.

Economists and lawmakers have relied on jobless claims data throughout the pandemic because its weekly release schedule is the closest to real-time economic data.

'This should be a flashing red light': Romans on unemployment

Global equitable access to Covid-19 vaccines would generate estimated economic benefits of at least $153 billion in 2020-21 and $466 billion by 2025 in 10 major economies, a report by the Eurasia Group has found.

The ACT Accelerator, led by the World Health Organization, in partnership with other international health organizations, is a global collaboration which supports the development and equitable distribution of the tests, treatments and vaccines.

The study determined that the ACT Accelerator program is “the only ‘end-to-end’ complete global solution -- across tests, treatments, and vaccines -- for tackling the pandemic.”

It examined the expected negative effects of sustained coronavirus outbreaks in low- and lower-middle-income countries (LLMICs), based on the downside and baseline scenarios of the IMF’s  October 2020 World Economic Outlook forecasts.

Leaving such countries without access to Covid-19 vaccines will cause “significant economic damage” and put “decades of economic progress at risk -- for both LLMIC and advanced economies alike," it found.

“Rapid, widespread, and equitable vaccination, tests, and treatments will save countless lives in LLMICs, allowing policymakers’ focus to return to the core development goals of raising living standards, empowering women, and marginalized communities, and strengthening institutions,” it said.

The Eurasia Group report was commissioned by the Bill and Melinda Gates Foundation, a partner in the ACT Accelerator program alongside WHO, European Commission and France.

To date, the 10 countries featured in the report have contributed $2.4 billion to the ACT Accelerator, with the UK committing just over $ 1 billion, and Germany, Canada, Japan and France committing $618 million, $290 million, $229 million and $147 million respectively. The program needs $38 billion in funding, of which $28.2 billion is still currently outstanding.

Prince Harry has said the Covid-19 pandemic is like a punishment from nature.

"Somebody said to me at the beginning of the pandemic, it's almost as though Mother Nature has sent us to our rooms for bad behavior, to really take a moment and think about what we've done," Prince Harry said during an interview released Tuesday on video-on-demand platform WaterBear.

It's been a universally tough year for everybody," he said.

"It certainly reminded me, as it has probably reminded all of us, how interconnected we all are, not just as people but through nature. We take so much from her and we rarely give a lot back," he said talking to WaterBear’s CEO Ellen Windemuth and Head of Strategy Sam Sutaria on behalf of NGO African Parks -- of which Prince Harry has been president since December 2017.

When asked how storytelling could help to drive action, he said: "Every single raindrop that falls from the sky relieves the parched ground. What if every single one of us was a raindrop and if every single one of us cared, which we do, because we have to care because at the end of the day, nature is our life source, but we’ve got to be clever and find a way to be able to uplift and inspire in that education and awareness."

To gather or not to gather has been the question at the forefront of the minds of today's religious leaders and their church members.

During the 1918 influenza pandemic that ultimately killed 50 million to 100 million people, different answers to that same question resulted in either collective well-being or widespread, devastating loss.

The US Supreme Court recently decided 5-4 to grant religious organizations in New York state relief from restrictions on the number of people attending religious services. In light of this development, looking back a century can offer guidance for religious institutions deciding to stay shuttered or reopen.

In 1918, many churches around the world closed their doors to save lives. Without financial support, some churches eventually closed permanently, while others survived with dropped-off donations and serving as hospitals instead of sanctuaries. For some families, the home became the altar.

Those who refused to adapt to the pandemic reaped the consequences. 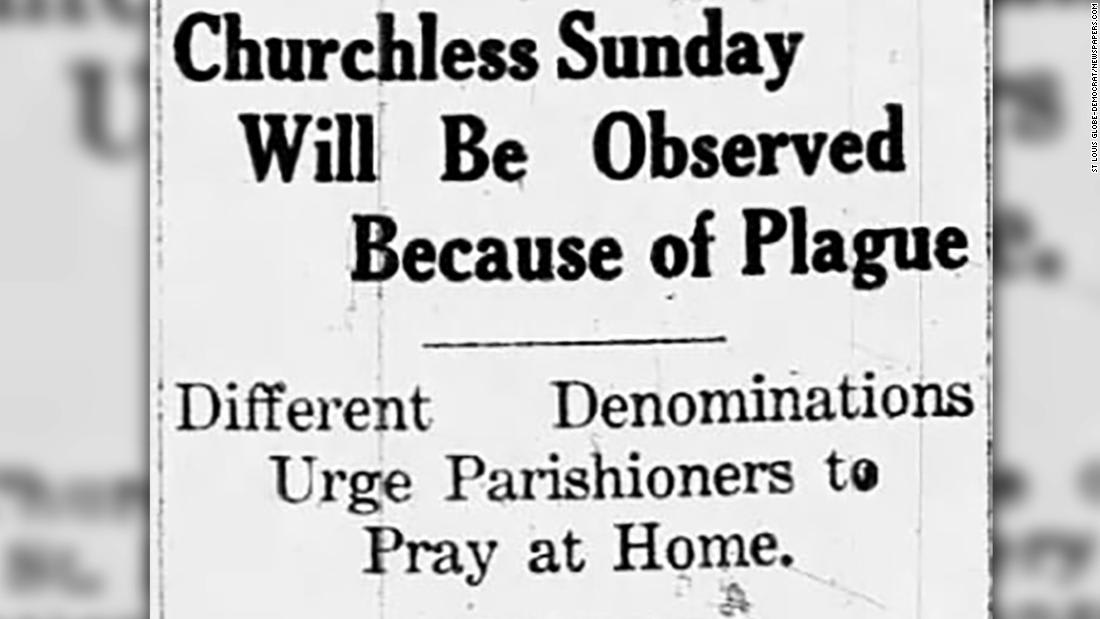 For churchgoers during the Covid-19 pandemic, a deadly lesson from the 1918 flu

An ensemble forecast published Thursday by the US Centers for Disease Control and Prevention (CDC) now projects there will be 303,000 to 329,000 coronavirus deaths in the United States by December 26.

Unlike some individual models, the CDC’s ensemble forecast only offers projections a few weeks into the future. The previous ensemble forecast, published November 25, projected up to 321,000 coronavirus deaths by December 19.

At least 273,847 people have already died from Covid-19 in the United States, according to data compiled by Johns Hopkins University.

“Moscow has set up a full technological and organizational chain for the vaccination [process],” Sergey Sobyanin said in a blog post. "Specialized storage facilities have been selected, refrigerators and containers for vaccine delivery have been prepared.”

Priority will go to the most at-risk groups such as teachers, health professionals and city workers, who can sign up online from Friday. The centers will then be used to vaccinate other groups depending on the amount of supplied doses, Sobyanin said.

The announcement comes a day after Russian President Vladimir Putin ordered his government to start large-scale vaccinations against the coronavirus from next week.

Russia registered its Sputnik V coronavirus vaccine in August ahead of large-scale Phase 3 trials which are currently underway. In November it said an early analysis of data from its the vaccine suggested it is 92% effective. However, some scientists are urging caution, noting that the data is far from conclusive.

Russian Health Minister Mikhail Murashko said Wednesday that to date more than 100,000 Russian citizens have had a Sputnik V shot, but did not specify who has been vaccinated.

Lothar Wieler said despite Germany's ''success in the last few weeks to stabilize infection numbers," cases in the country "remain too high."

We have reached a plateau but infection numbers are not decreasing just yet," he added.

Wieler went on to say that Germany's ''death toll is rising from week to week'' and ''in some regions, hospitals are on the brink."

Particularly worrying is the spread of coronavirus infections in care homes where, according to Wieler, many elderly patients over 80 are at risk. ''We must protect the elderly," he said, pointing to statistics that show ''every fifth person with Covid-19 in care homes is at risk of dying.''

The head of RKI's surveillance unit, Ute Rexroth, warned that the virus is circulating at particularly high levels between the age group of 15 to 29, and is being spread to the elderly generation. "The incident rate must be brought down," he said.

Germany's Chancellor Angela Merkel on Wednesday said that ''the goal continues to be to get the incidence numbers below 50 cases per 100,000 inhabitants for seven days."

"We have a very high daily number of fatalities and this shows us once again just how big a responsibility we have to get the incidence rate below 50 again," Merkel said.

The country has been battling a third wave of Covid-19 infections since the beginning of October with daily record-breaking increases reported across the nation.

Iran is the worst-hit country in its region in both case and death numbers. On Thursday, 358 deaths were also reported bringing the total to 49,348 deaths.

Living under tough economic US sanctions, the country has avoided a complete lockdown but opted to impose tougher restrictions on government institutions and non-essential businesses.

Iran’s Minister of Health Saeed Namaki said on Wednesday that the country has put in a pre-purchase vaccine order with the World Health Organization through the COVAX program, which they intend to receive as soon as global distribution starts.

"We have pre-purchased 16.8 million coronavirus vaccines from the World Health Organization's COVAX and we have joint production with other countries,” Namaki said according to state-news agency IRNA.