California reported at least 220 Covid-19 related deaths Thursday, the highest number since the beginning of the pandemic, according to data from the state’s Department of Public Health.

The previous high was 219, set at the end of July. This brings California’s total number of deaths attributed to the virus to 20,463.

ICU capacity statewide has dropped to just under 10% availability.

By Thursday night, approximately 90% of California residents, some 36 million people, will live in areas under stay-at-home orders. About 75% of those live in three of the state’s five regions where ICU capacity has dipped below 15%, triggering a state order. The rest live in Bay Area counties that have proactively implemented health orders of their own.

Note: These numbers were released by the California Department of Public Health and may not line up exactly in real-time with CNN’s database drawn from Johns Hopkins University and the Covid Tracking Project.

Pfizer officials told the US Food and Drug Administration’s vaccine advisers Thursday they saw no serious allergic reactions among volunteers who tested the company’s coronavirus vaccine.

“Amongst the 44,000 subjects, we saw no serious allergic reactions to the vaccine,” Dr. William Gruber, senior vice president of vaccine clinical research and development at Pfizer, told the FDA’s Vaccines and Related Biological Products Advisory Committee.

“Within the clinical trial we've actually not seen evidence to suggest a signal related to allergic reaction to the vaccine,” he added.

“Obviously we're conscious of the report that's occurred with use in the UK,” Gruber said, but declined to comment on it.

Two health workers who received the vaccine during the first day of rollout on Tuesday in Britain suffered allergic reactions, the National Health Service in England said.

Pfizer excluded from its clinical trial anyone with a history of allergies such as a severe adverse reaction associated with a vaccine and/or severe allergic reaction “to any component of the study intervention(s).”

Senate Majority Leader Mitch McConnell’s aides told top staff in both parties Wednesday that the GOP leader doesn’t see a path to an agreement over the two main sticking points: Liability protections for businesses and aid for states and cities, sources in both parties said.

The bipartisan group of lawmakers has tried to broker a deal on those issues but has been stymied for days. McConnell does not believe any such deal on those provisions could get enough support to pass the Senate.

McConnell has publicly advocated to drop those two provisions and pass what they can agree on, an idea both Speaker of the House Nancy Pelosi and Senate Minority Leader Chuck Schumer have rejected.

About 15.5 million health workers in the United States have direct patient contact and about 2 million people live in nursing homes and assisted living facilities – groups that should be first in line for a coronavirus vaccine – according to a new analysis released Thursday.

The US Centers for Disease Control and Prevention has said frontline healthcare workers and residents of long-term care facilities such as nursing homes should be first in line for any coronavirus vaccine.

“These 17.6 million adults, about 7% of U.S. adults, would qualify for priority vaccinations as the first doses of vaccines are distributed to states this month, based on the CDC recommendation,” the nonprofit organization, which studies health care issues, said in a statement.

The CDC has estimated there are 21 million health care workers who would qualify in a first round of vaccine distribution, and another 3 million residents of long term care facilities.

The Kaiser analysts said they checked for the number of workers who have direct patient contact. They also checked state by state and said several states were likely to suffer a shortfall of vaccines.

“The analysis shows the share of each state’s adult population who are health care workers with direct patient contact or nursing facility residents, ranging from 4% in Washington, DC, to 10% in North Dakota,” Kaiser said. “California has the largest number of adults in these groups, more than 1.7 million, followed by Texas (1.3 million) and New York (1.2 million). Due to data limitations, our state-level estimates do not include people who live in assisted living facilities or in other residential settings."

Pfizer was looking for the safest vaccine it could when sorting through various candidates for a coronavirus vaccine, the senior vice president and head of vaccine research and development at Pfizer said Thursday.

“Given the enormity of our mission, clinical data were important to us in deciding on the right candidate for a Covid-19 vaccine,” Pfizer’s Kathrin Jansen told the FDA’s Vaccines and Related Biological Products Advisory Committee.

“We evaluated not just one, but four different candidates in Phase 1 to be able to make real time scientific decisions to select the best candidate,” Jansen added.

Jansen said when it comes to mRNA vaccines, “we have a deep scientific understanding of how such vaccines work.”

She said that mRNA vaccines “can be developed and scaled up quickly,” offering “a clear advantage,” over other types of vaccines.

Vice President Mike Pence delivered remarks at an Operation Warp Speed event in South Carolina and acknowledged that while US Food and Drug Administration authorization of a vaccine appears imminent, the US is still facing a “challenging time.”

“While we gather here today to talk about Operation Warp Speed and what we believe will be the imminent approval of the first coronavirus vaccine for the American people in a matter of days — we recognize we’re going through a challenging time as we see cases rising in virtually every state in the country,” Pence said Thursday, before adding that America has “never been better prepared” to combat coronavirus.

Pence's comments come as President Trump has spent the past 45 hours silent on the pandemic. On Wednesday, the US had its most deadly day of the pandemic.

“I want the people of this state to know that America has never been better prepared to combat the coronavirus than we are today," Pence said.

Pence also spoke about the vaccine and said it was important for Americans to understand that the administration “cut no corners in the development of these vaccines.”

“We’re just a few short days away from what I believe will be the beginning of the end of the coronavirus pandemic in America,” Pence said.

Ellen DeGeneres announced on Twitter Thursday that she has tested positive for Covid-19.

DeGeneres said she was feeling "fine right now," adding that she would see everyone again after the holidays.

She has been broadcasting her syndicated talk show, which is produced by Warner Bros. Television, with Covid-19 protocols in place since September.

CNN has reached out to Warner Bros. Television, which like CNN is part of WarnerMedia, for comment.

There have been at least 15,413,913 cases of coronavirus in the US and at least 289,970 people have died, according to Johns Hopkins University's tally of cases.

Here's a look at how deaths and cases in the US compare to other countries: 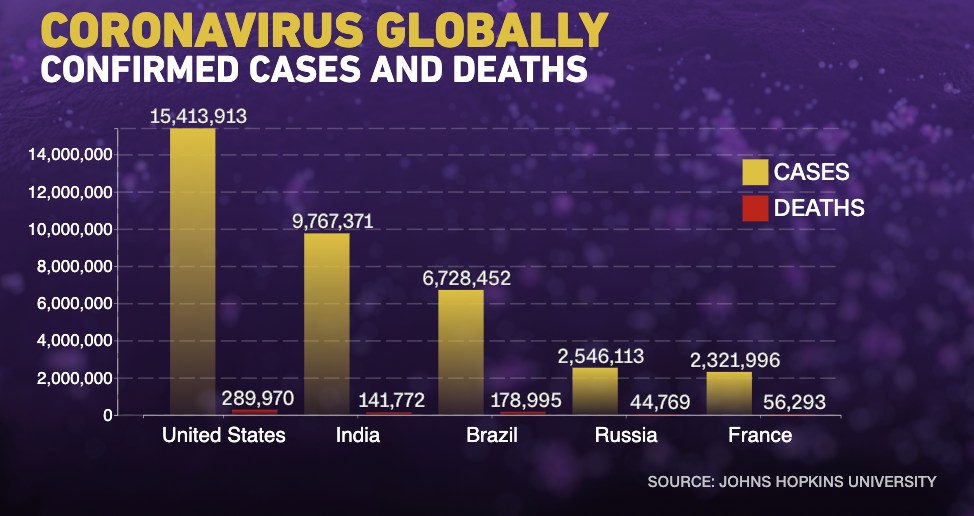 Volunteers who received a placebo in Covid-19 vaccine trials are free to withdraw from those studies in order to receive the vaccine once one is authorized and made available in the United States, said Dr. Steven Goodman, associate dean of clinical and translational research at Stanford University of School of Medicine.

This could affect how vaccine trials proceed, he noted.

“Placebo-controlled trials may continue to be possible in areas or populations for whom vaccines are not available, but that is complicated for other reasons," Goodman told the FDA's Vaccines and Related Biological Products Advisory Committee during a meeting on Thursday, referring to people who aren’t yet prioritized to receive the vaccine.

The committee is meeting to discuss a possible emergency use authorization for Pfizer's Covid-19 vaccine candidate. A vote on a recommendation to the FDA is expected later today.

The vote doesn't mean the vaccine is authorized immediately. The decision comes from the FDA, which typically follows the advisory committee's recommendation.