He continued: "It’s going to be a phased process. We have to bring in testing, so that we’re testing as we're doing this reopening, so that we can gauge whether or not we're increasing the virus spread. We have to start with really what's an expansion of essential services.”

Cuomo said coronavirus cases over the past five days or so seem to have plateaued in the state.

“We changed the trajectory of the virus by our actions. And that's the real important lesson to me,” he added.

“I want to get out of the house, trust me. Everybody does. But if you move too quickly and not smartly, you will see the numbers go right back up again and you'll have to do another lockdown,” he said, adding that “the federal government has to be realistic about this. You can't just wish it and then it is so.”

There’ll be no decision until Thursday on whether to extend the UK’s coronavirus restrictions, the Prime Minister’s official spokesperson said.

He said the government’s Scientific Advisory Group for Emergencies (SAGE) will discuss social distancing rules at its meeting today, which the government will then consider.

The spokesperson said Prime Minister Boris Johnson will continue to rest at the countryside retreat, Chequers, as he recovers from coronavirus. There isn’t any timeframe yet on when he will return to Downing Street.

“I don’t think it’s helpful to speculate. The PM will take advice from his medical team on when to return to work,” the spokesperson said.

One of Johnson’s senior advisors, Dominic Cummings, has returned to work after previously being in self-isolation due to coronavirus-type symptoms, the spokesman said.

An international aviation group now expects worldwide losses due to the coronavirus to top $314 billion, higher than earlier estimates.

The estimate from the International Air Transport Association says travel worldwide has plummeted by 80%, much deeper than its earlier predictions.

It said the industry is “virtually grounded outside [the] U.S.”  US government stimulus measures require airlines to continue a minimal level of domestic service.

The good news for the industry, according to IATA Economist Brian Pearce, is that “There’s a large amount of pent up demand” when travel restrictions are lifted.

New York Gov. Andrew Cuomo said he wouldn’t follow a possible order from Trump to ease coronavirus restrictions in the state if it put public health at risk.

“If he ordered me to reopen in a way that would endanger the public health of the people of my state, I wouldn't do it,” Gov. Cuomo said. “That would be the worst possible thing he could do at this moment would be to act dictatorial and to act in a partisan, divisive way.”

“We don't have King Trump. We have President Trump … So the President should not even think of going there. That would be divisive and political, and it would be totally contrary to everything we have been trying to do by working in a cooperative fashion,” he told CNN’s Alisyn Camerota.

Cuomo said that Trump’s remarks are a reversal of his previous positions on leaving stay-at-home orders up to individual states and letting them find equipment for hospitals.

“This is a 180 … So it makes no sense. It’s schizophrenic,” Cuomo said. “The first position, he stepped back and said it’s up to the states. This is stepping forward and trying to step over the states, which is frankly I think more partisan, more divisive and more dangerous.”

Cuomo reiterated his call to keep politics out of the coronavirus pandemic.

“I know this is a political year. I know it is a hyper-partisan environment. I know it is red versus blue. Not anymore. Not when it comes to this. This is red, white and blue. I have 10,000 deaths in my state," Cuomo said. "This virus didn't kill Democrats or Republicans. It killed Americans.”

States on the country's East and West coasts are forming their own regional pacts to work together on how to reopen from the stay-at-home orders each has issued. Connecticut is one of seven states in the East coast working group.

“The governors are getting together, taking the lead. We were early in taking care of the social distancing, and we're going to take care of getting our economy open again, but in a thoughtful and safe way,” Lamont told CNN’s John Berman. “This is no time to take our eye off the ball. That would be dangerous.”

Lamont did commend officials from Vice President Pence’s coronavirus task force for being responsive to the state’s need for equipment.

“Don't let the verbal hand grenades from the President distract from a lot of other good work that's going on,” he said.

Lamont said he is seeing a rising number of cases in the northern part of his state, and he’s told residents that he won’t make a decision on reading restrictions until at least May 20.

“I think it's going to take at least another month to be careful and doing the testing before we can get more aggressive … I still have an infection that's growing in most of the state. This is no time to relax,” he said.

The European Commission is set to propose an action plan for a co-ordinated coronavirus lockdown exit across Europe.

Its proposed plan -- seen by CNN -- says measures to slow the spread of the virus have "come at a dramatic cost for our economy and society, and cannot last indefinitely."

The Commission is expected to send its plan to the EU's member states later on Tuesday and to present it on Wednesday.

The plan says there are two main criteria to assess whether the time has come to begin to relax the restrictions: Has the spread of the disease has significantly decreased for a sustained period? And do health care systems have enough capacity to cope if case numbers were to rise again?

The plan calls for an exit strategy based on science, coordinated between member states with "respect and solidarity."

It says a successful exit strategy would also be dependent on measures being met, including an expanded coronavirus testing capacity to measure contagion and the population's immunity, along with a "harmonized" and "robust" system for contact tracing.

It notes that the exit should be gradual, starting at local levels. Gatherings of people should also be permitted gradually and economic activity should be "phased in."

"Once the exit phase is successfully entered, the next phase would be the recovery, in which the economy needs to pick up pace and get back on a growth path," the four-page document concludes.

"What we have been working on over the past weeks is a roadmap with recommendations, to ensure that when they start to move out of these restrictive measures, they do so in a manner which is effective," Mamer said.

He added that this includes, in particular, "taking into account obviously the situation in other EU countries and … in particular in neighbor countries.”

Mamer said the Commission would be making recommendations as to "what we believe are the main criteria which member states should use when they are taking these decisions."

“We are not going to going to be saying to any specific member state: ‘This is now the right point in time for you to start taking measures to ease the restrictions you have in place’. This is really a decision for member states," Mamer said.

“What we are going to be recommending is a series of criteria and conditions that we think should apply when assessing and ultimately deciding whether it makes sense to start to ease the measures.”

There are at least 4,769 positive cases across the entire Department of Defense.

The meat supply is at risk. Farm workers are in fear. It's hard to get groceries.

Health professionals -- doctors, nurses and everyone down the line -- are the rightful and obvious heroes of the pandemic, but if this dark episode has taught us anything about the way we live today, it could be that our society rests on the backs of a lot of people who cannot simply stay home and chill while the coronavirus blows through.

Food workers are frontline workers too: You probably saw the headline recently that one of the largest hog processing plants in the country had ceased production for the foreseeable future. The reason? Employees at the plant, a Smithfield operation, account for about half of the coronavirus cases in South Dakota.

Similar closures have hit plants in Pennsylvania and Iowa and the CEO of Smithfield said the country's meat supply is at risk. 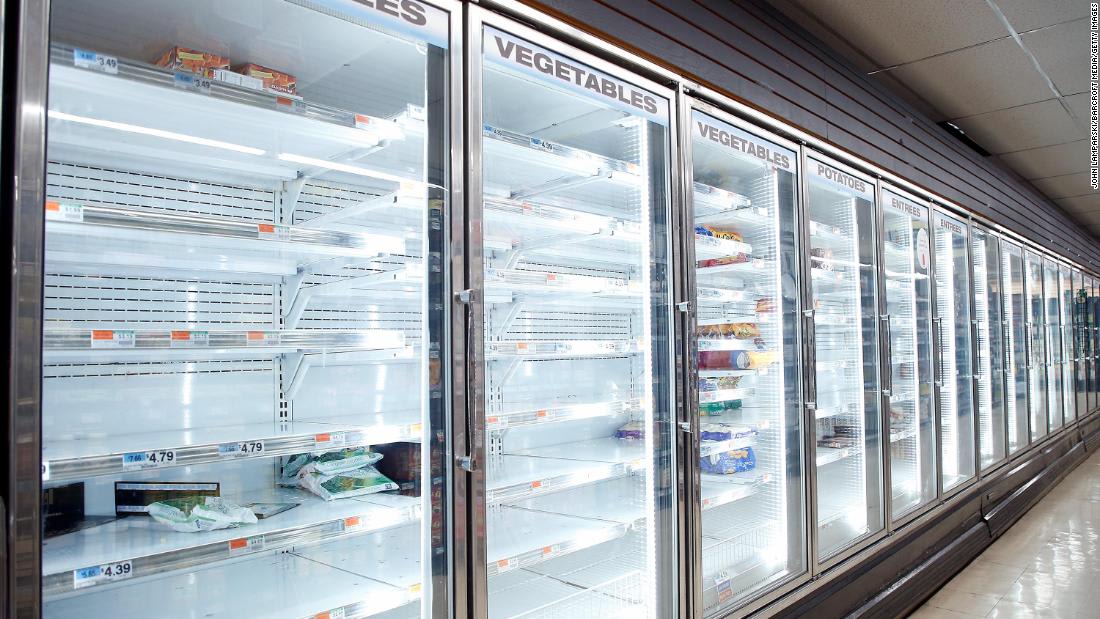 It's time to talk more seriously about the food supply

Iran has reported 98 new coronavirus-related deaths over the past 24 hours – the first time in nearly a month that the country has seen a two-digit increase in new deaths, health ministry spokesman Kianush Jahanpoor said on state TV on Tuesday.

“We hope it is the beginning of a diminishing trend, but as a proverbial saying in Farsi [says], one flower may not bring spring," Jahanpoor said, adding that: “We must observe social distancing and stay at home as far as possible."

Jahanpoor announced 1,574 new cases of coronavirus across the country on Tuesday, bringing the total to 74,877. The 98 new deaths he announced bring Iran's death toll from coronavirus to 4,683.