After the Florida Department of Health didn’t issue a Covid-19 report in recognition of the New Year holiday yesterday, today an additional 31,518 Covid-19 cases were reported in the state, according to data from the department.

There were also 220 new coronavirus related deaths reported on Saturday, bringing the total number of deaths in the state to 22,210, according to the state's health department.

According to the Florida Agency for Health Care Administration, there are currently 6,701 people hospitalized with Covid-19 in the state.

Note: These numbers were released by Florida’s public health agency and may not line up exactly in real-time with CNN’s database drawn from Johns Hopkins University and the Covid Tracking Project.

We’re not out from under the coronavirus pandemic yet, but a Roaring ’20s-type rebound is on the horizon, according to sociologist, physician and Yale professor Nicholas Christakis.

“Plagues are not new to our species; they're just new to us,” he said.

By the beginning of 2022, we will reach herd immunity and a majority of the population will be vaccinated, he predicts, but “it's still going to take some time to recover from the social and psychological and economic shock,” he said.

So by the end of 2023, Christakis said the world will enter the post-pandemic period, and “all of these…experiences that are now being constrained by the germ will reverse.”

“If history is a guide, what's going to happen is all of us that have been cooped up — have been saving our money, have become more religious…more risk-averse — all of those trends will unwind and people will relentlessly seek out social opportunities in nightclubs and bars and political rallies and sporting events and musical concerts and so on. There might be…some sexual licentiousness, people with a lot of pent-up desire…[and] more liberal spending, for example,” he added.

The California Public Health Department issued a request for blood donations Saturday as the state struggles through a "surge in Covid-19 cases."

"Blood centers have an urgent need for all blood types right now with the surge in Covid-19 cases," the department tweeted Saturday.

Some context: The state hit a grim milestone Friday as it reported 585 Covid-19 related deaths, the highest on record.

Additional health care staffing, including National Guard members and health care providers from the US Army and Air Force, have been mobilized to provide assistance to overrun hospitals.

Note: These numbers were released by the California Department of Public Health and may not line up exactly in real-time with CNN’s database drawn from Johns Hopkins University and the Covid Tracking Project.

India will resume limited flights with the United Kingdom after suspending them for two weeks amid concerns over the new variant of coronavirus, India's Minister of Civil Aviation Hardeep Singh Puri said Saturday.

Flights to the UK will resume starting Jan. 6, Puri said in a tweet, while flights from the UK to India will start back up on Jan. 8.

All passengers coming from the UK must present a negative PCR test conducted within 72 hours before boarding, India's Ministry of Health and Family Welfare said in a statement Saturday.

It will be mandatory for passengers flying from the UK to take another Covid-19 test on arrival at Indian airports, it said.

The governor of Tokyo and three neighboring prefectures on Saturday urged Japan's central government to declare a state of emergency amid a surge in new coronavirus cases.

Tokyo's Gov. Yuriko Koike and the governors of Saitama, Chiba and Kanagawa prefectures made the request during a meeting with Yasutoshi Nishimura, who is Japan's Economy Minister in charge of the government's coronavirus response.

At a news conference after the meeting, Nishimura said that the government will consider the request the governors made after consulting with health experts.

He added that he shares the view that the situation in the metropolitan area is "severe" and the "issuance of a state of emergency is in sight."

Governors warn of infection surge: The four governors called the recent surge a "crisis situation" that could have a major impact on the health care system.

They argued measures need to be strengthened immediately and further cooperation with the national government is necessary under a special anti-coronavirus law.

Tokyo reported 814 new Covid-19 cases on Saturday after it reaching an all-time high of 1,337 cases on Thursday -- exceeding 1,000 for the first time.

Mixing Covid-19 vaccines is not recommended, Public Health England’s Head of Immunisations Dr. Mary Ramsay said Saturday, after government guidance was updated this week to say the interchangeability of Covid-19 vaccines was a "reasonable" option.

“We do not recommend mixing the Covid-19 vaccines – if your first dose is the Pfizer vaccine you should not be given the AstraZeneca vaccine for your second dose and vice versa,” Ramsay said in a statement.

“There may be extremely rare occasions where the same vaccine is not available, or where it is not known what vaccine the patient received. Every effort should be made to give them the same vaccine, but where this is not possible it is better to give a second dose of another vaccine than not at all,” she added.

Ramsay clarified the UK’s position on vaccine mixing after an update to the government’s vaccine playbook on Dec. 31.

What did the updated guidance say? Thursday's guidance said if the same vaccine is not available, or if the first product received is unknown, “it is reasonable to offer one dose of the locally available product to complete the schedule."

“This option is preferred if the individual is likely to be at immediate high risk or is considered unlikely to attend again,” it added.

Which vaccines are the UK using? The UK authorized emergency use of the Pfizer/BioNTech vaccine on December 2 and the Oxford University/AstraZeneca vaccine on Dec. 30.

The guidance recommends both vaccines to be administered in two doses, a minimum of 21 days apart for Pfizer/BioNTech and 28 days apart for AstraZeneca, with longer term protection provided by the second inoculation.

UK guidelines contradict US approach: The updated UK guidance contradicts guidelines in the United States for the two vaccines it has authorized, Pfizer/BioNTech and Moderna. The Centers for Disease Control and Prevention has noted that the authorized Covid-19 vaccines “are not interchangeable with each other or with other Covid-19 vaccine products,” and that “the safety and efficacy of a mixed-product series have not been evaluated. Both doses of the series should be completed with the same product.”

The CDC adds, however, that “if two doses of different mRNA COVID-19 vaccine products are inadvertently administered, no additional doses of either product are recommended at this time.”

Five people have been arrested and more than 1,000 fines have been issued after an illegal New Year's rave in the French countryside ended on Saturday, local authorities said.

More than 2,500 partygoers attended the illegal party in the region of Brittany in France, despite the government's strict coronavirus restrictions and a national night-time curfew.

About 1,600 fines were issued as of Saturday following the rave, which started on Thursday, French Interior Minister Gerald Darmanin said via his official Twitter profile.

Trucks, sound systems and generators have been seized and Gendarmes officers "are continuing their investigation and checks so that this illegal event is harshly sanctioned," Darmanin added.

Of the 1,200 fines, 800 are related to coronavirus restrictions, Emmanuel Berthier, prefect of Ille-et-Vilaine, said.

Up to 20 vehicles including trucks which may be carrying sound equipment managed to escape the police block, Sauvegrain added.

"There is a judicial investigation which will allow us to identify the main perpetrators and to arrest them," Sauvegrain added.

Local police said they had tried to shut down the rave, but "faced violent hostility," with a police vehicle set on fire, other vehicles damaged, and soldiers sprayed with bottles and stones, causing minor injuries.

"No new violence" occurred since Thursday, a Gendarmerie Nationale spokesperson told CNN on Saturday, adding that partygoers were "leaving the premises voluntarily."

Local authorities said the number of partygoers was "estimated at 2,500, coming from different French departments and from abroad."

Native Americans are losing their elders to Covid-19. As death tolls continue to climb, tribes are struggling to protect some of their last remaining knowledge and language keepers.

"Every time one of those elders leaves this world, it's like a whole library, a whole beautiful chapter of our history, of our ceremonies -- all that knowledge, gone," Clayson Benally, a member of Navajo Nation, said.

It's not written, it's not dictated, you're not going to find it on the internet."

Self-isolating in their Flagstaff, Arizona, homes, Clayson and his sister Jeneda Benally have been working to pass on the knowledge of their elder father, Jones Benally, during the pandemic.

Native Americans are particularly susceptible to the coronavirus because they suffer from disproportionate rates of asthma, heart disease, hypertension and diabetes.

The Navajo Nation is the largest tribe in the US, with over 300,000 members, and had reported 22,776 confirmed Covid-19 cases and 783 deaths as of Thursday. The tribe has been on lockdown since November 16 and will continue to stay at home until January 10, according to a recent announcement from the Navajo Department of Health. The new measures also include 57-hour weekend lockdowns. 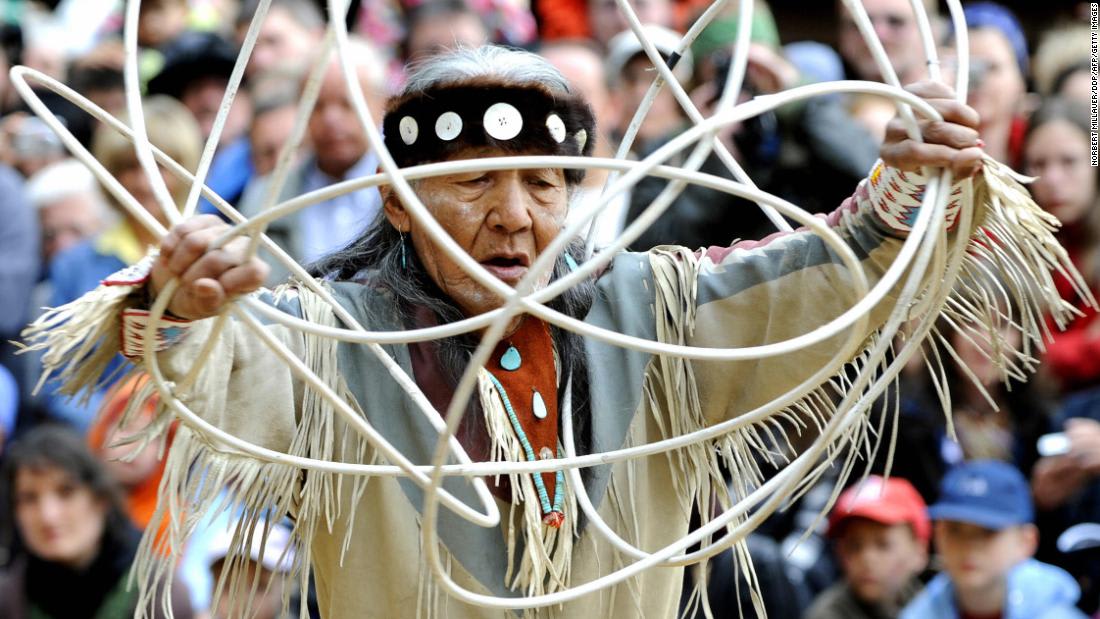 Twenty-five types of businesses will temporarily close in Thailand's capital, Bangkok, from Saturday in a bid to contain a new wave of local Covid-19 infections, according to a statement from the Government's Public Relations Department.

Bangkok's Governor Aswin Khwanmuang signed an order on Friday to close the businesses because of their "risk of spreading the disease."

The businesses include pubs and bars, amusement and water parks, children's playgrounds, fitness centers, massage parlors, and "all buildings at schools, tutorial schools, and educational institutions."

Restaurants, shopping centers, cinemas, and beauty salons are among the businesses allowed to stay open, but are required to follow strict Covid-19 prevention measures.

Anyone caught breaking the rules will be subject to a jail term of up to one year, or a fine of up to 100,000 baht (US$3,333), or both, according to the government statement.

Thailand reported 216 new cases of Covid-19 on Saturday, taking the country's total to 7,379, according to the country's Department of Disease Control; 1,545 of those total cases occurred in Bangkok province.