The United States has reported at least 20,427,780 coronavirus cases, including at least 350,186 deaths, according to Johns Hopkins University's tally.

Note: Daily totals may be affected by the New Year's Day holiday; CNN is aware of at least one state that did not report Covid-19 data on Friday but included additional cases on Saturday.

Juliana Morawski has realized that she most likely couldn't go back to working in an emergency room, even if she wanted to. As a retired emergency nurse of 30 years, that realization is hard for someone who just wants to lend a helping hand on the front lines.

But even though she isn't in the ER, Morawski, 69, is working at an Illinois clinic, answering phones and administering Covid-19 vaccines, and she told CNN she takes comfort in knowing that "anything is better than nothing."

She said due to her age and some minor health problems, she thinks ER managers would consider her a high risk.

I still, honestly, feel guilty that I'm not able to help (in the ER) because they (nurses) are so burned out," she said.

"They're definitely getting hammered and hammered, daily."

Morawski got a first dose of the Covid-19 vaccine last week and said she's looking forward to the second dose next month.

Call to action: In March, New York Governor Andrew Cuomo, along with officials from around the world, put out calls for qualified healthcare workers to dig out their scrubs and return to their craft to help fight on the front lines of the coronavirus pandemic.

Evelyn Ochoa-Celano, 63, answered that call despite having retired from nursing, three months prior. Unfortunately a few months later, she died of coronavirus herself.

Ochoa-Celano retired from a city hospital in the Bronx, New York, her son, John Tabaniag told CNN, but was picking up part-time shifts at a nursing home on Long Island to stay busy.

After Cuomo's letter came out, Ochoa-Celano called her son to say she was transitioning back to full-time work at the nursing home.

As much as Tabaniag was proud of his mom for wanting to fight on the front lines, he was worried about her health. Having lost his stepfather and younger brother, he feared losing his mother, too.

At a recent Saturday protest outside London's Stratford train station -- comprised of bindi-wearing hippies, conspiracy theorists in balaclavas, and middle-aged men in waterproof jackets -- a protester with the grassroots, anti-lockdown group StandUpX yelled into a megaphone.

"The vaccine is there to make you infertile... that vaccine is just going to make them able to control you," they shouted.

Listening to the dangerously false spiel was 24-year-old Rebekah, who we are only identifying by her first name. A survivor of domestic abuse, Rebekah said she was living in a Manchester safe house when the first UK-wide lockdown began in March. "If I was still living at home [with her abuser] in lockdown, I probably would have died," she told CNN.

But Rebekah's concerns about the crushing social and economic effects of pandemic restrictions took a conspiratorial turn after she read an Instagram post that she said made her question "information shared by the media." She researched the matter online, churning up information that, while not supported by facts, nonetheless backed up her growing suspicions.

Conspiracy theories spread: Many conspiracy theories have found legs during the pandemic, and one of the first ones that Rebekah found was the widely debunked claim that Microsoft co-founder Bill Gates was profiting from coronavirus vaccines.

There's no evidence Gates or his foundation will profit from the Covid-19 vaccines, according to PolitiFact, a nonpartisan fact-checking operation.

In 2021, experts fear this alternative, fact-free universe will fuel hesitancy in taking the vaccine, a vital weapon in the fight against the virus.

"To beat Covid-19, we also need to defeat the parallel pandemic of mistrust that has consistently hindered our collective response to this disease," Francesco Rocca, president of the International Federation of Red Cross and Red Crescent Societies, warned in a virtual briefing to the UN Correspondents Association on November 30.

The drills come as India moved to formally approve two Covid-19 vaccines for emergency use, one made by AstraZeneca and Oxford University and the other developed locally.

India has reported the second highest number of coronavirus infections, trailing only the United States.

The first phase of India's vaccination plan covers almost as many people as the entire US population.

The drill was conducted at 286 sites across India, and was aimed at familiarizing officers on all levels with the operational guidelines, Doordarshan said.

Some 114,100 workers have been trained on tasks such as verifying personal data, conducting cold chain and logistics management, and uploading information using government software, it added.

The Indian government has been planning a massive vaccination drive amid the Covid-19 pandemic. In the first phase, authorities are aiming to vaccinate 300 million people, including health care workers, police, soldiers, and vulnerable groups, such as citizens above the age of 50 and those with serious comorbidities. 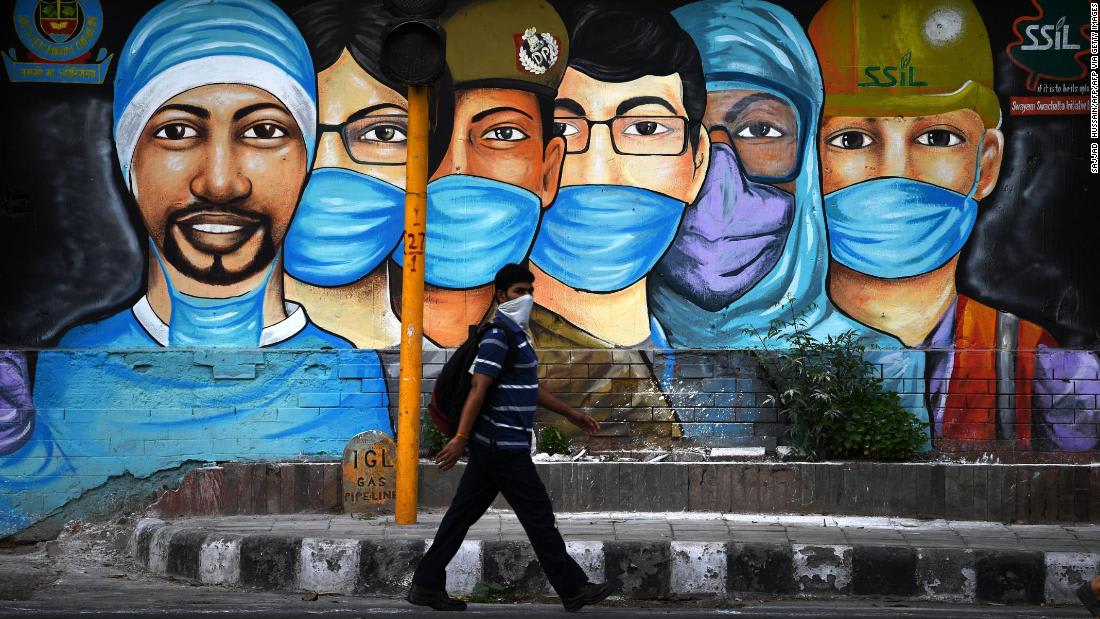 Hospital ICUs are at 93% capacity, with 61% of beds being used by Covid-19 patients and 32% by non-Covid patients. Additionally, 57% of ventilators across the state are in use, according to the Health Department’s data dashboard.

At least 80,000 vaccines have already been administered to health care workers and residents and staff of long-term care facilities, according to the state’s Health Department.

A Covid-19 vaccine appointment at a Canton, South Dakota hospital turned into a marriage proposal for one healthcare couple.

Robbie Vargas-Cortes, 31, a paramedic and EMS supervisor, was scheduled to get his vaccination on December 23, and knew his boyfriend of five years was one of the vaccine administrators at Sanford Canton-Inwood Medical Center.

"I wanted for it to be a surprise," Vargas-Cortes told CNN.

Eric Vanderlee, a registered nurse, told CNN he had no idea the proposal was coming. When Vargas-Cortes rolled up his sleeve and there was already tape on his arm, he thought his boyfriend was jokingly indicating where the vaccine should go, "like a bulls eye or something."

But Vargas-Cortes had taped a ring to his arm.

"It just kind of dawned on me and I was like, 'absolutely, of course, yes.' It was just an amazing moment after I figured it out," Vanderlee said.

Vanderlee then had to administer the vaccine to his new fiancé.

And within 10 minutes, Vargas-Cortes, vaccinated and engaged, was out the door responding to an ambulance call.

"Congratulations, Eric and Robby!" Sanford Health said in a Facebook post along with video of the proposal.

Vargas-Cortes said he had the ring for three years, and was waiting for the right moment to pop the question. "We're nearing the end of the pandemic. The vaccine is kind of like a new chapter," he said. 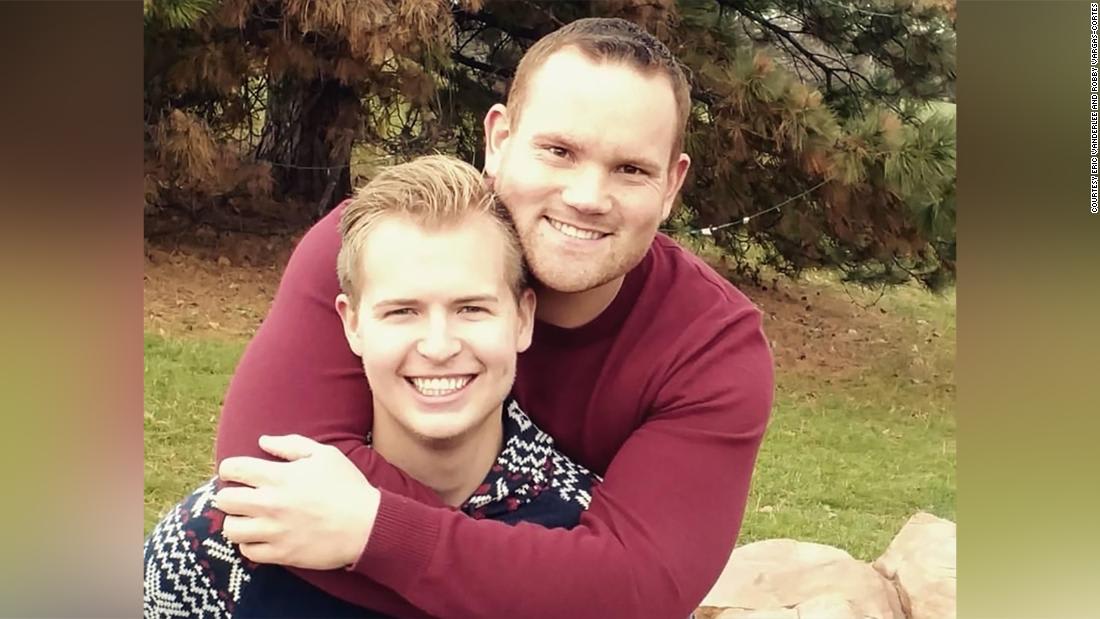 The current surge in Covid-19 cases in California is driven in part by economic disparities, Dr. Jorge Rodriguez, a Cuban-born internal medicine specialist and CNN medical analyst, said on Saturday.

“The huge inequity in both healthcare and living and bias is coming to roost. There are people that are having to work multiple jobs and then you see other people that are more privileged having parties and going to visit Puerto Vallarta. It’s so diverse,” Rodriguez said.
“But also, I wouldn’t be surprised if a few weeks from now, we find out this much more contagious variant of the virus is also here,” added Rodriguez, who is in private practice in Los Angeles.

Rodriguez said he is concerned about the emergence of a new, potentially more infectious Covid-19 variant that could further strain the healthcare system.

More than four million vaccine doses have been administered in the United States, according to the US Centers for Disease Control and Prevention.

Distributed doses and administered doses include both the Pfizer and Moderna Covid-19 vaccines.