At least 3,775 Covid-19 deaths were reported in the United States on Tuesday, according to data from Johns Hopkins University -- the highest number of fatalities recorded in a single day since the pandemic began.

California health officials have ordered that non-essential surgeries be delayed in regions where ICU bed capacity is 10% or less.

The move was made in order to ease the burden on California hospitals, which are treating a record number of Covid-19 patients, according to the California Department of Public Health (CDPH). It is effective immediately and will last for three weeks.

CDPH said the order will help “reduce pressure on strained hospital systems and redistribute the responsibility of medical care across the state so patients can continue to receive lifesaving care.”

“California is experiencing an unprecedented and exponential surge in COVID-19 cases, and staffing and other resources are becoming strained,” State Public Health Officer Tomás Aragón said in the public health order.

“Large proportions of California hospitals have reached significant strain on their ability to provide adequate medical care to their communities.”

Surgeries for patients who have serious and urgent medical conditions will continue, officials said.

California is the epicenter of the current surge of Covid-19 cases in the United States. On Tuesday, the state reported 31,440 new cases and another 368 people died from the virus, pushing the statewide death toll to more than 27,000.

Only New York and Texas have reported a higher number of virus-related fatalities.

Officials in President Donald Trump's administration have been promising to speed up vaccine distribution. They have admitted they have fallen far short of promises to have vaccinated 20 million people by the end of 2020.

“On behalf of Operation Warp Speed, I am proud to report that today, 3,087,100 vaccines were distributed to the American people,” Acting Secretary of Defense Christopher Miller said in a statement.
“Today’s great work brings the total number of doses distributed to 19,141,175 over the last 21 days since the first vaccine doses showed up at administration sites.”

Earlier Tuesday, the Centers for Disease Control and Prevention reported 17 million vaccine doses had been distributed and more than 4.8 million people had been given their first doses of vaccine.

North Korea kicked off a rare political event that's supposed to happen every five years or so with about 5,000 people -- including leader Kim Jong Un -- gathered indoors without masks and seated close together on Tuesday.

While it's impossible to verify if face coverings were worn at any point in time, none of the images released by North Korea's state-run KCNA news Wednesday of the Workers Party Congress show people wearing masks indoors.

From a propaganda standpoint, the images make sense: North Korea claims to not have recorded a single case of Covid-19, so holding a high-level meeting without masks is a way to reinforce that narrative.

But almost no one believes North Korea has been spared from a pandemic that has infected more than 86 million people and killed nearly 2 million. In fact, Kim's regime recognizes the danger of the virus and has gone to incredible lengths to stop its spread.

Almost all travel into the country ceased shortly after the virus emerged a year ago, and internal travel is also heavily restricted. North Korean state media regularly carries articles reminding its people on the importance of its emergency anti-epidemic campaign. And the regime reportedly had two people executed for not following Covid-19 guidelines, including a customs official who did not follow virus prevention rules while importing goods from China.

Experts believe Pyongyang is enacting a vigilant response because it knows its dilapidated healthcare infrastructure likely cannot contain a major outbreak of Covid-19.

That makes the photographs from the meeting Tuesday all the more puzzling. Perhaps North Korea believes the safeguards it put in place were good enough to allow attendees not to wear masks to the meeting. This is a unique event that North Korea does not want to postpone -- it's just the eighth Party Congress in North Korea's history and the second of Kim's tenure. The last one held before Kim took power was in 1980.

But holding it is a risk. If just one of the 5,000 people who traveled from across the country to attend the meeting had Covid-19 and was infectious, it means Kim may have just kicked off an incredibly important political meeting with a super-spreader event.

Countries around the Asia-Pacific region have closed borders and imposed strict quarantine requirements, essentially sealing themselves off from the world.

But in many jurisdictions there's a key exception to those rules: flight crews.

For months, flight crews in a number of places -- including Taiwan and Australia -- have been able to avoid the tough quarantine rules imposed on other international travelers. But rule breaches by airline staff in both places in December have prompted questions about whether exemptions for aviation workers are creating an unnecessary risk to the public.

Taiwan has now tightened its quarantine rules for flight crews, something two Australian states did in December.

But it's a tricky predicament. While health experts say that treating flight crews differently is a loophole in an otherwise tough border approach, aviation industry officials say exemptions are needed to keep the industry operating -- and avoid jeopardizing flight crews' mental health.

What happened in Taiwan? When Taiwan reported its first locally-transmitted case in more than 250 days on December 22, authorities quickly pin-pointed a foreign pilot as the source of infection.

Authorities said a New Zealand pilot in his 60s infected a woman in her 30s after completing the required three days of quarantine required for pilots, Taiwan state media CNA reported. That pilot has now been fined by Taiwanese authorities for not disclosing his complete contact history and fired by his company.

What happened in Australia? A series of incidents in December prompted questions over quarantine exemptions for flight crews. A Sydney van driver who had transported international flight crews tested positive at the start of December.

Later that month, New South Wales Police fined 13 international air crew members 1,000 Australian dollars ($760) each for going to a number of Sydney venues when they should have been quarantining. And just before Christmas, a Qantas crew member tested positive after flying into Darwin from Paris and then boarding a domestic flight. 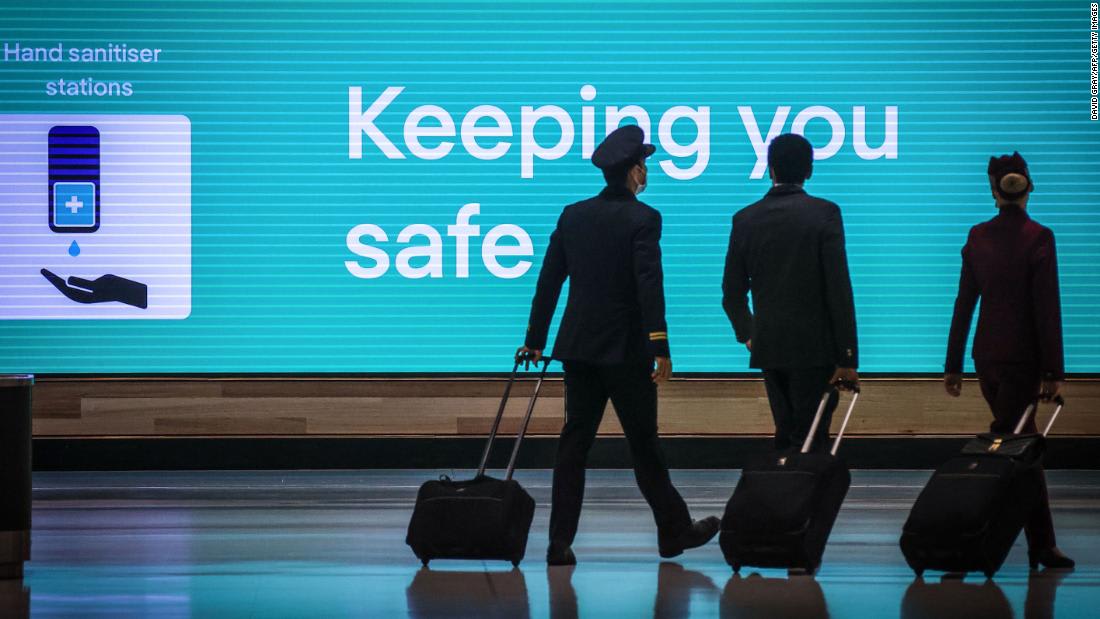 In Australia and Taiwan's fight against Covid, flight crews are proving to be their Achilles heel

The World Health Organization said that China has blocked the arrival of a team investigating the origins of the coronavirus pandemic, in a rare rebuke from the UN agency.

WHO Director-General Tedros Adhanom Ghebreyesus said two scientists on the United Nations team had already left their home countries for Wuhan when they were told that Chinese officials had not approved the necessary permissions to enter the country.

The arrangements had been jointly agreed with China in advance.

"I am very disappointed with this news," Tedros told a news conference in Geneva on Tuesday. "I have been in contact with senior Chinese officials and I have once again made clear that the mission is a priority for WHO and the international team."

Tedros said WHO was "eager to get the mission underway as soon as possible" and that he had been given assurances that Beijing was speeding up the internal procedure for "the earliest possible deployment."

Dr. Michael Ryan, executive director of WHO's health emergencies program said there was an issue with visas and one team member had already returned home. The other was waiting in transit in a third country.

WHO officials have long been negotiating with Beijing to allow a team of global scientists access to key sites to investigate the origin of the virus -- first detected in Wuhan in December 2019 -- and its likely jump from an unidentified host species to humans.

Ryan said the team hoped it was "just a logistical and bureaucratic issue" that can be resolved in "good faith in the coming hours and recommence the deployment of the team as soon as possible." 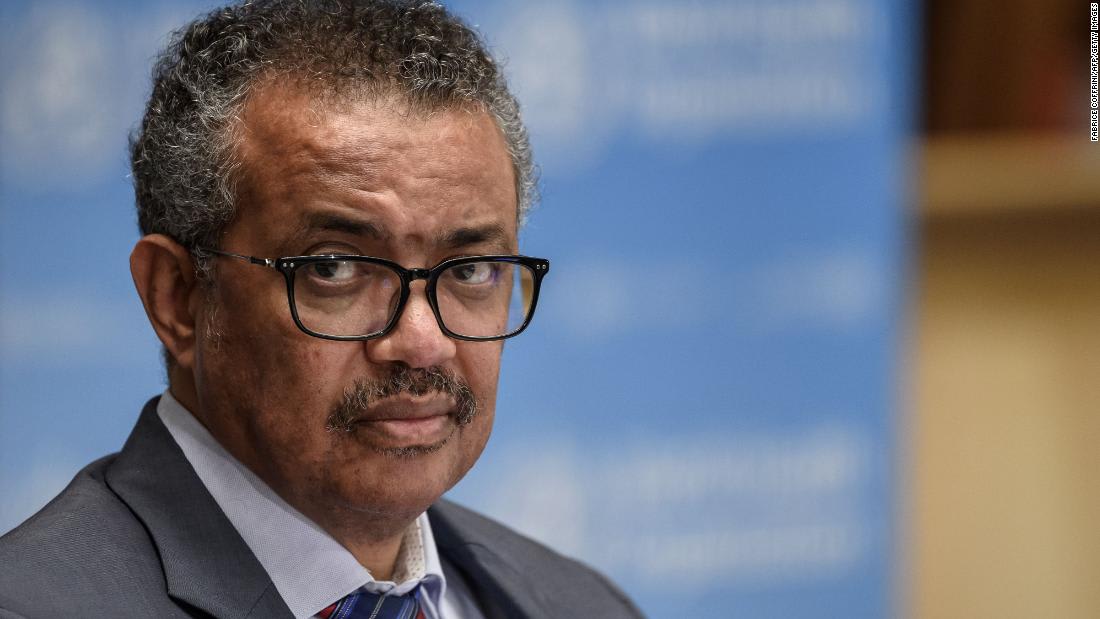 The United States reported 131,195 current Covid-19 hospitalizations on Tuesday, setting a new record high since the pandemic began, according to the Covid Tracking Project (CTP).

This is the 35th consecutive day that the US has remained above 100,000 current hospitalizations.

According to CTP data, the highest hospitalization numbers were recorded on the following days:

The pace of Covid-19 vaccine administration in the United States continues to slow, according to data from the US Centers for Disease Control and Prevention.

Only five states have administered at least half of the Covid-19 vaccine doses that have been distributed to them, according to the CDC data: