One person is dying from Covid-19 in Los Angeles every eight minutes, according to a new tweet from the county.

Over 11,000 Los Angeles County residents have died of Covid-19 since the beginning of the pandemic. More than 5,000 of those deaths have occurred in the past two months, data from the LA County Department of Public Health shows.

“People who were otherwise leading healthy, productive lives are now passing away because of a chance encounter with the COVID-19 virus," LA County Health Director Barbara Ferrer said Wednesday, adding that the county is seeing more than 200 deaths each day.

Cases have increased 941% since November 1 and so far, the rate of new cases in January is double what it was in December, according to Ferrer. In the past two months, the positivity rate in LA County has jumped from 3.8% to 21.8%.

Hospitalizations are 10 times higher than they were on November 1, and Health Services Director Christina Ghaly warns that yet another surge is expected within the next two weeks. More than 8,000 people are currently hospitalized, with 20% in intensive care units and 19% on ventilators.

Los Angeles County hospitals are still operating in contingency care, but given the overwhelming demand, could venture into crisis care mode. Should that occur, patients could be transferred to other areas and all hospitals will be required to halt elective surgeries.

Patients in intensive care units in the United Kingdom could soon receive drugs typically used to treat rheumatoid arthritis after clinical trials found they can help save lives and reduce time in hospital by 10 days, the Department of Health said Thursday.

Results from the government-funded clinical trial — published online on Thursday, but not yet peer-reviewed — showed the drugs, Tocilizumab and Sarilumab, reduced the relative risk of death by 24%, when either were administered to patients within 24 hours of entering intensive care, the Department of Health said in a press release. They also reduced time in hospital by an average of seven to 10 days.

"This is a significant step forward for increasing survival of patients in intensive care with Covid-19. The data shows that tocilizumab, and likely sarilumab, speed up and improve the odds of recovery in intensive care, which is crucial for helping to relieve pressure on intensive care and hospitals and saving lives,” England’s Deputy Chief Medical Officer Jonathan Van-Tam said.

The government will update its guidance on Friday to encourage the use of these drugs for Covid-19 patients in intensive care. The drugs are typically available in UK hospitals.

During the trial, the drugs were administered in addition to a corticosteroid, such as dexamethasone, which is already provided in the standard of care, the press release said.

Patients receiving the current standard of care alone experienced a mortality rate of 35.8%. This was reduced to 27.3% using tocilizumab or sarilumab, a 24% relative reduction in risk of mortality.

The US Covid-19 vaccine rollout needs a couple of weeks to catch up, and if that doesn’t happen, it’s time to make changes, Dr. Anthony Fauci, director of the National Institute of Allergy and Infectious Diseases said on Thursday.

Speaking on NPR’s Morning Edition on Thursday. Fauci noted that it’s early in the distribution process. and hiccups were always expected.

That’s not an excuse, we can’t make excuses,” he added. “But I think that’s something to be expected.”

The other unfortunate thing, he said, was that the rollout began during the holiday season, “and that’s the reason why things start slow,” he added.

“I think it would be fair to just observe what happens in the next couple of weeks,” he said. “If we don’t catch up on what the original goal was, then we really need to make some changes about what we’re doing.

“We just need to give a little bit (of) slack – not a lot – but enough to say, well, we’re past the holiday season, now let’s really turn the afterburners on.”

The US has the highest number of Covid-19 cases worldwide, with a total of 21.3 million cases reported, according to data from Johns Hopkins University.

The World Health Organization (WHO) has called on European countries to intensify coronavirus measures as the region deals with a new variant that was first detected in the UK.

WHO Europe director Hans Kluge said Thursday that further measures were needed to "flatten the steep vertical line" of rising cases in some countries.

While the variant appears to spread more easily than others, there's no evidence that it's any more deadly or causes more severe disease.

Health officials have also downplayed the possibility that coronavirus vaccines won't work against the variant.

But in the UK, health workers are struggling with a steep rise in cases and deaths. The country recorded a total of 1,041 further deaths on Wednesday, as well as 62,322 new cases.

"This is an alarming situation, which means that for a short period of time we need to do more than we have done and to intensify the public health and social measures to be certain we can flatten the steep vertical line in some countries," Kluge said. 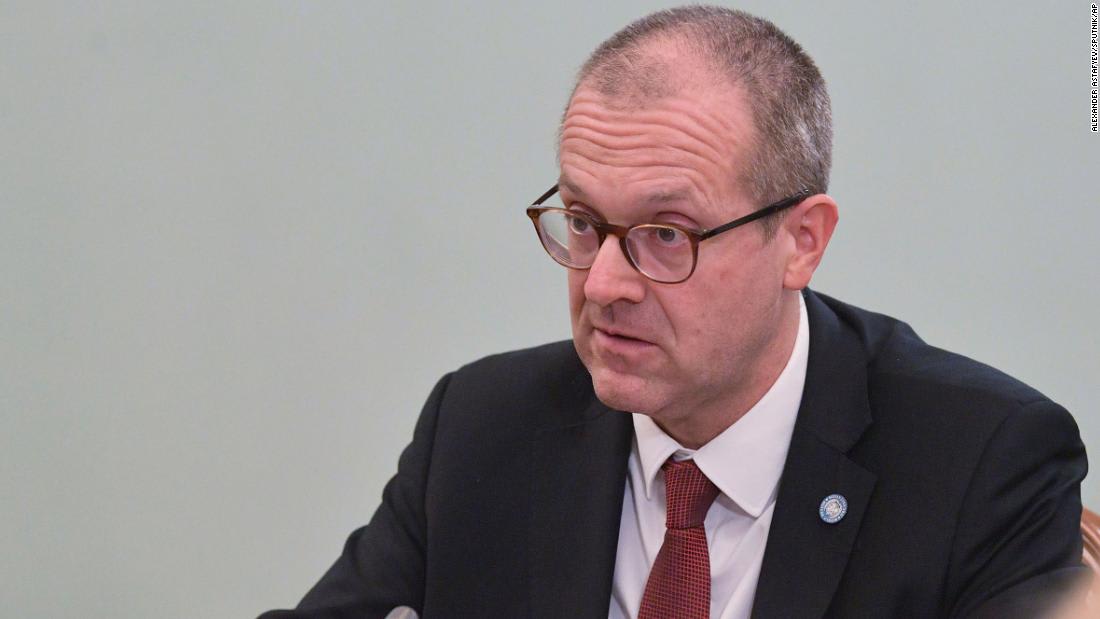 London “may run out of [hospital] beds” in the “next few days” due to the surge in Covid-19 cases in the capital, London Mayor Sadiq Khan said on Thursday.

Khan, when asked by LBC Radio if Covid-19 was “out of control” in London, said: “Yes. This virus is out of control."
He added: "The NHS is on the cusp of being overwhelmed. There has been no time during this pandemic where I’ve been more concerned than I am today.”
Khan implored Londoners to “stay home” and said National Health Service (NHS) workers “are stretched, they are overworked, many of them are suffering trauma that may take years to recover from.”

The UK is currently grappling with a devastating wave of the pandemic. On Wednesday, it recorded its highest daily increase in coronavirus-related deaths since April, with a total of 1,041 fatalities registered. The country is currently under lockdown, with restrictions imposed across all four nations.

According to data from the Greater London Authority, 14,892 people tested positive in the capital on Wednesday, compared to 62,322 that same day for the entire United Kingdom.

The English city of Birmingham will run out of Pfizer/BioNTech vaccine doses on Friday with "no clarity on when further supplies will arrive," local officials warned on Thursday in a letter sent to UK Health Secretary Matt Hancock.

The letter, signed by the leader of Birmingham City Council Ian Ward and local members of parliament Liam Byrne and Andrew Mitchell, also points out that Birmingham "has not yet been supplied with any AstraZeneca [vaccine] stock."

"In addition, it remains unclear who is responsible for overseeing the vaccination programme in Birmingham and whom we should hold to account for progress and delivery," the letter reads.

The letter comes after NHS England began rolling out the Oxford/AstraZeneca vaccine in primary care centers on Thursday.

The UK approved the Pfizer/BioNTech vaccine on December 2 and the Oxford/AstraZeneca jab on December 30.

NHS England said this week that hundreds of new vaccination sites are opening at hospitals and in the community, "on top of the 700 which were already open and vaccinating."

But Britain finds itself in a race to vaccinate people as a new variant circulates among residents and cases surge to record winter highs.

On Wednesday the UK recorded its highest daily increase in coronavirus-related deaths since 21 April, with a total of 1,041 further deaths registered.

Health officials also reported a further 62,322 cases, bringing the total number of UK infections confirmed since the pandemic began to 2,836,801.

India will roll out a nationwide vaccination trial across 33 states and union territories on Friday.

“We are at the final stages of embarking on vaccine distribution," Union Minister of Health Harsh Vardhan said on Thursday, adding that two vaccines "are at the stage where they can be made available to the public.”

Feedback from an earlier "mock" exercise across four states in December will be used in the trial rollout, Vardhan said.

India plans to vaccinate 20 million health care and frontline workers in Phase One of the roll out and 270 million people over 50 and people with comorbidities in Phase Two.

The country has the second-highest toll of coronavirus cases in the world, with more than 10.3 million cases recorded, according to data from Johns Hopkins University.

“We have a rich experience of conducting elections and universal immunization [programs] ... so we have to take the experience from both these strategies,” said Dr. Manohar Agnani, a health ministry officer monitoring vaccine distribution.

India's Health Ministry has trained 330,000 people to take part in administering the vaccine.

“I want to give confidence to the entire team here that we have adequate cold storage facilities available ... and sufficient quantity of syringes ... which have already been provided to states and UTs (union territories) for the first phase of the drive,” Agnani said.

For the trial, the central government has asked states to carry out sessions at district hospitals or other government health facilities and private hospitals. States will also carry out urban and rural outreach to test all aspects of distribution.

China has banned 11 million people from leaving the city of Shijiazhuang, the capital of Hebei province in the country's north. The ban came into effect Thursday.

Over 100 new cases were reported Wednesday in the province, which neighbors China's capital Beijing.

​At a press conference Thursday, Meng Xianghong, deputy mayor of Shijiazhuang, announced a ban on outbound travel for all people and vehicles in the city, except for emergencies.

Gaocheng district in Shijiazhuang had been declared a high-risk area on Wednesday.

As of noon on Thursday, samples had been collected from a total of 6,109,685 people for mass testing in the city.

Shijiazhuang reported 50 confirmed cases and 67 asymptomatic cases on Wednesday, according to a Thursday update.

Mkhize said the first million doses will arrive this month, with the remainder delivered in February.

Vaccination priority in the first round of inoculations will be given to the nation's more than 1 million health care workers, in both the public and private sector.

The Serum Institute is under contract to produce the Oxford/AstraZeneca vaccine. The deal comes after considerable public pressure in South Africa for the government to speed up its vaccine rollout plan as the country suffers through a dramatic second wave of infection driven, in part, by a more infectious variant of the virus.

One Wednesday, South Africa reported a record of more than 20,000 new confirmed cases. It continues to be the hardest-hit country on the continent, with more than 30,000 Covid-19 deaths.

“We urge the public to be patient with us as we continue to engage manufacturers. Our commitment remains to save and protect the lives of our people. We will not neglect our responsibility to protect lives and also fight this pandemic,” Mkhize said in a statement Thursday.

South Africa will rely on the preexisting regulatory approval given to the vaccine by other countries, according to Mkhize. The Oxford/AstraZeneca vaccine was approved by the UK drug regulator on December 30.

The South African government has also signed up to the COVAX vaccine facility, which aims to provide global access to effective Covid-19 vaccines.

COVAX is expected to begin its first distribution in the second quarter of this year.