US stocks rose slightly Friday, hitting new all-time highs after the government reported that 140,000 jobs were lost in December.

The grim news is a sign of weakness for the economy but investors are hoping it will put more pressure on Washington for a bigger stimulus package as Joe Biden’s inauguration draws nearer and with Democrats set to control the House and Senate.

Shares of Tesla continued to surge too. Elon Musk’s electric car company is now worth more than $800 billion.

See the latest from CNN Business:

The mayor of London, Sadiq Khan, has declared a “major incident” in the English capital “due to the rapid spread of the coronavirus (...) and the increase of Covid-19 cases in hospitals, which has left the NHS at risk of being overwhelmed,” according to a statement published on the Mayor’s office website on Friday.

The decision comes “as the number of Covid-19 cases in London has exceeded 1,000 per 100,000, putting immense pressure on an already stretched NHS,” the statement said.

“The situation in London is now critical with the spread of the virus out of control. The number of cases in London has increased rapidly with more than a third more patients being treated in our hospitals now compared to the peak of the pandemic last April,” Khan said.

According to his office, “the impact is also being felt right across the emergency services with hundreds of firefighters from London Fire Brigade once again assisting London Ambulance Service by volunteering to drive ambulances as the ambulance services faces one of the busiest times in its history.”

The London Ambulance Service is now taking up to 8,000 emergency calls a day now, compared to 5,500 on a typical busy day, the statement said.

In the UK, the declaration of a major incident enables local authorities to seek further support from the national government to address the situation.

London Mayor Sadiq Khan declared a "'major incident' due to the rapid spread of the coronavirus across the capital and the increase of Covid-19 cases in hospitals, which has left the NHS at risk of being overwhelmed," his office wrote in a press release.

He took the decision as the number of Covid-19 cases in London exceeded "1,000 per 100,000" putting increased pressure on the National Health Service (NHS), which saw patient numbers rise by 27% between December 30 and January 6.

“We are declaring a major incident because the threat this virus poses to our city is at crisis point. If we do not take immediate action now, our NHS could be overwhelmed and more people will die," Khan said in a statement.

Meanwhile, Moderna became the third Covid-19 vaccine to be authorized by UK regulators. The government has agreed to purchase an additional 10 million doses on top of its previous order of 7 million, the UK Department of Health announced Friday.

However, it comes as the UK recorded 1,162 Covid-19 related deaths on Thursday, the highest toll since the first peak in April.

Germany's coronavirus-related daily death toll has reached an all-time high, of 1,188 deaths in the past day. The previous record was 1,129, recorded on December 30 last year.

This means from BioNTech/Pfizer and Moderna alone, Germany has the potential to receive at least 140 million vaccine doses this year.

Spanish Health Minister Salvador Illa warned Friday that the country will have some tough weeks ahead as Covid-19 cases continues to rise.

On Thursday, the country topped two million cumulative Covid-19 cases, with numbers doubling in just the last 11 weeks, according to a running CNN tally pinned on data released by its Ministry of Health.

Long called an outlier for not implementing a full-scale coronavirus lockdown like its European neighbors, Sweden moved in a more conventional direction on Friday, when its parliament voted in favor of an act that would allowed stricter restrictions.

This will include banning public gatherings, if necessary, and it effectively gives the government the legal right to impose a “lockdown” of whatever degree.

The European Union continues its drive to secure vaccines for its member states. On Friday, European Commission President Ursula von der Leyen announced that the EU will extend its contract with Pfizer/BioNTech for “up to an additional 300 million vaccines” in 2021 -- doubling the amount of doses from that vaccine.

Meanwhile, the European Medicines Agency (EMA) expects AstraZeneca to submit a “conditional marketing application” for its Covid-19 vaccine “next week,” the regulatory body said in a statement on Twitter on Friday. 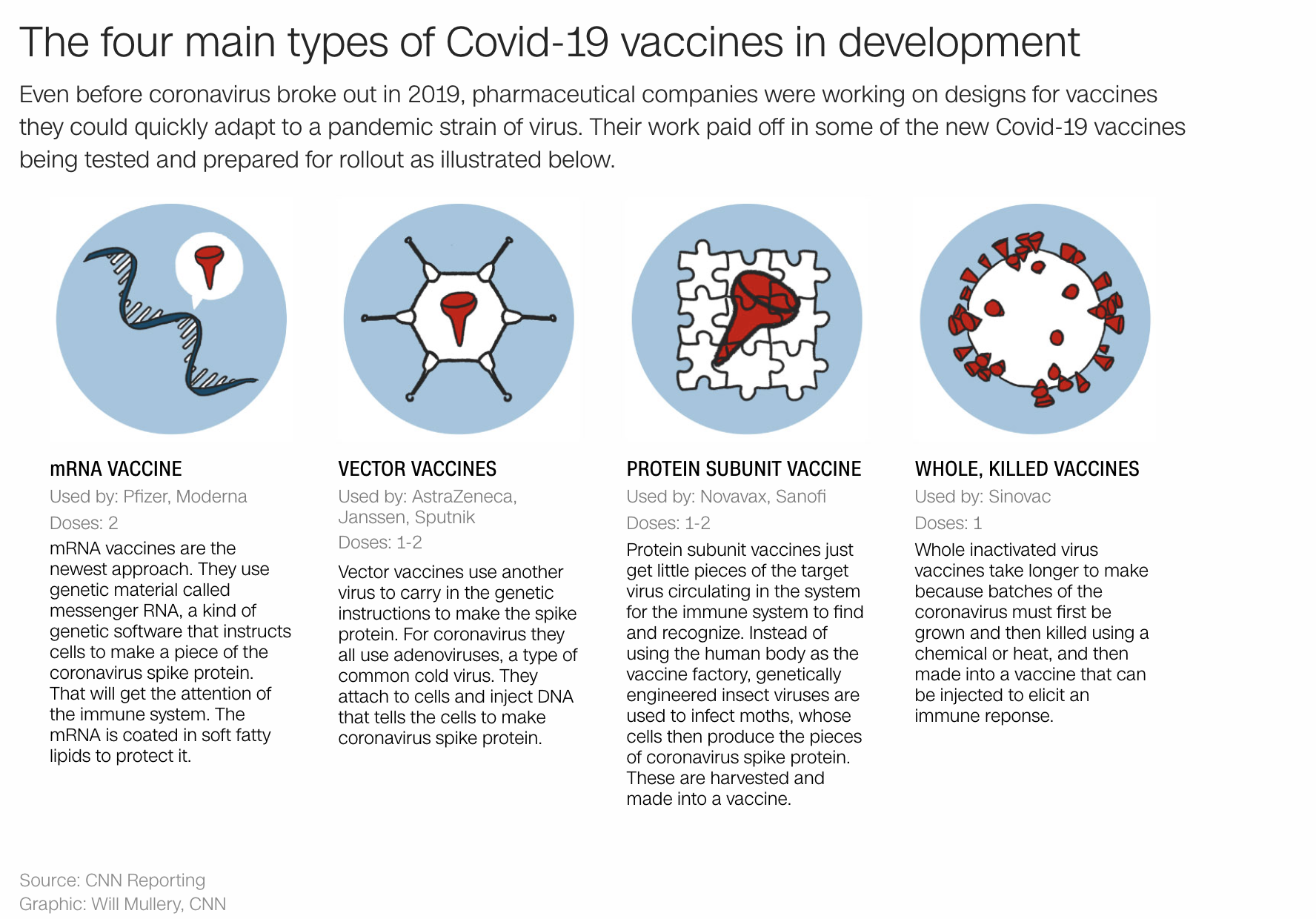 The European Medicines Agency (EMA) expects AstraZeneca to submit a “conditional marketing application” for its Covid-19 vaccine “next week,” the agency said in a statement on Twitter on Friday.

It added it could issue a “possible conclusion” at the end of January, “depending on data and evaluation progress.”

Should the EMA greenlight the use of that vaccine as it did with Pfizer/BioNTech and Moderna, the European Commission would then need to grant a decision on the conditional marketing authorization for the Oxford/AstraZeneca vaccine, allowing vaccination programmes to be rolled out across the EU.

The agency is in charge of the evaluation and supervision of medicinal products in the European Union.

Vaccine makers Pfizer and BioNTech said on Friday they were "encouraged" by a new study offering early evidence that their Covid-19 vaccine might be effective against the two new coronavirus variants first identified in South Africa and the United Kingdom.

The study was conducted by researchers at Pfizer and the University of Texas Medical Branch (UTMB).

"Pfizer, BioNTech, and UTMB are encouraged by these early, in vitro study findings," according to a news release from BioNTech on Friday.

Further data are needed to monitor the Pfizer-BioNTech COVID-19 vaccine’s effectiveness in preventing COVID-19 caused by new virus variants. If the virus mutates such that an update to the vaccine is required to continue to confer protection against COVID-19, we believe that the flexibility of BioNTech’s proprietary mRNA vaccine platform is well suited to enable an adjustment to the vaccine."

Read more about the study here.

There is “enough supply” to vaccinate priority groups in the UK by the deadline of February 15, British Prime Minister Boris Johnson said in a press conference on Thursday.

Detailing the vaccination campaign program, Johnson said: “The limits will not be on our distributional power but on the supply of vaccines.” However, he added he had “no doubt” that the UK has enough supply to vaccinate the four priority groups by the February deadline.

Priority groups: He said these four groups include older care home residents and staff, everyone 70 or older, all frontline NHS workers and all “clinically extremely vulnerable.”

Johnson said in England there will be over 1,000 sites led by family doctors (known as general practitioners in the UK) providing vaccines, 223 hospital sites, seven giant vaccination centers and a first wave of 200 community pharmacies “by the end of next week.”

He said that these sites should be together be able to deliver hundreds of thousands of vaccines per day by January 15, adding that the plan was for everyone to have a vaccination available within a radius of ten miles.

The country was “throwing everything at it, around the clock,” Johnson insisted.

“Let this be clear: this is a national challenge on a scale like nothing we’ve seen before and it will require an unprecedented national effort,” he warned.

Moderna's Covid-19 vaccine has been authorized by the UK medicines regulator “following months of rigorous clinical trials involving tens of thousands of people and an extensive analysis of the vaccine’s safety, quality and effectiveness,” the country's Department of Health said in a press release on Friday.

The UK government has agreed to purchase an additional 10 million doses of the Moderna vaccine on top of its previous order of 7 million, taking the total to 17 million, the release said. Supplies will begin to be delivered to the UK from this spring once Moderna expands its production capability, it added.

“This is further great news and another weapon in our arsenal to tame this awful disease,” Health Secretary Matt Hancock said.

We have already vaccinated nearly 1.5 million people across the UK and Moderna’s vaccine will allow us to accelerate our vaccination programme even further once doses become available from the spring."

On Wednesday, the European Commission also authorized the use of the Moderna coronavirus vaccine across the European Union’s 27 member nations, hours after the European Medicines Agency recommended it do so.

Sweden’s parliament has voted in favor of a temporary act that will allow further disease control measures to counteract the spread of Covid-19, according to a statement on the parliament (Riksdag) website on Friday.

Sweden has long been an outlier when it comes to coronavirus measures, declining to impose the full-scale lockdowns favored by its European counterparts. The country has seen a higher death rate per capita than its Scandinavian neighbors, with a total of 9,262 deaths recorded in Sweden according to data from Johns Hopkins University.

The Covid-19 Act will apply from January 10 until the end of September and provides the government with the framework to "introduce special restrictions for both certain activities and places."

The statement said the restrictions may apply to places where the public congregate including shopping centers and malls, public transport and domestic air travel and places where private gatherings are held.

"If necessary, it will be possible to prohibit public gatherings of a certain size at places to which the public have access and close premises that serve food and drink," the statement added.

Spanish Health Minister Salvador Illa has warned that the country will face some tough weeks as the number of Covid-19 cases continues to rise.

“We are going to have some tough weeks ahead again, with an increase in the number of cases and hospitalizations,” Illa said during a press conference on Friday. “It is very important that we reduce mobility and reduce contacts to the maximum and strictly follow the measures that regional health authorities dictate.”

“If we do this, we’ll be able to stabilize the increase in cases,” Illa also said.

Turning to the vaccination campaign, the health minister revealed that 140,000 people had already been vaccinated in Spain, but said he wanted to improve and speed up vaccinations across the country.

"Our objective is to have more people vaccinated than infected in Spain, as soon as possible, and to reach a high threshold of 70% of Spaniards vaccinated by the summer,” Illa said.

Spain has seen 2,024,904 Covid-19 infections and 51,675 related deaths since the pandemic began, according to Johns Hopkins University data.