A new study provides early evidence that a Covid-19 vaccine might be effective against two new coronavirus variants first identified in South Africa and the United Kingdom, despite a concerning mutation.

The two viruses share a mutation known as N501Y that scientists worry could allow the virus to evade the immune protection generated by a vaccine.

The researchers made a version of the virus in the lab that carries the mutation. They tested it against blood taken from 20 people who had received two doses of the Pfizer vaccine as part of a clinical trial. In research posted online Thursday, they said they found “no reduction in neutralization activity” against the mutated virus.

The N501Y mutation appears to help the virus attach to human cells, which may partly explain why these new strains appear to be more transmissible. But it is just one of many mutations in both strains that scientists have worried could make the virus less susceptible to vaccines or treatments.

The study -- conducted by researchers at Pfizer and the University of Texas Medical Branch -- does not test the full array of these mutations. It also has not been peer-reviewed.

In a statement last month, Pfizer said it had performed similar tests on “multiple mutant strains. To date, we have found consistent coverage of all the strains tested.”

It will be important to continue “monitoring of the significance of changes for vaccine coverage,” the researchers wrote.
That’s because of “the possibility that a future mutation … might necessitate a vaccine strain change.” Both Pfizer’s and Moderna’s vaccines use genetic technology that would allow the vaccines to be quickly adapted to account for mutations, they noted.

At least 274,703 Covid-19 cases and a record 4,085 deaths tied to the virus were reported in the United States on Thursday, according to Johns Hopkins University's tally of cases.

Thursday marked the first time that Covid-19 deaths in the US topped 4,000 in a single day.

There have been at least 21,579,567 cases of coronavirus confirmed in the US, according to the university. At least 365,317 people have died.

Vaccine rollout: At least 21,419,800 Covid-19 vaccine doses have been distributed in the US and at least 5,919,418 shots administered, according to the US Centers for Disease Control and Prevention.

China has locked down a city of 11 million people in its northern province of Hebei, in an effort to contain the country's worst coronavirus flare-up in months.

Residents of Shijiazhuang, a provincial capital close to Beijing, have been barred from leaving the city, as major highways were blocked, train and bus stations closed and flights canceled.

The lockdown comes as a total of 117 Covid-19 infections -- including 67 asymptomatic cases -- were detected in Shijiazhuang on Wednesday. On Thursday, the city identified another 66 positive cases, according to the Hebei provincial health commission.

Since January 2, a total of 304 positive cases have been reported in Hebei -- most of which were in Shijiazhuang, official figures show. The city is located just 180 miles southwest of Beijing -- about three hours' drive away, or an hour on the high-speed rail.

At a news conference Thursday, municipal officials announced a ban on outbound travel for all residents and vehicles from Shijiazhuang, except for emergencies.

Within the city, gatherings are banned, all schools have been suspended, and residential communities and villages are also closed off.

Upcoming holiday: The restrictions are some of the strictest imposed in China since the country largely contained the spread of the coronavirus in March. They are reminiscent of the draconian lockdown during the initial outbreak in the central city of Wuhan, a city of similarly sized population where the coronavirus was first detected in December 2019.

The outbreak in Shijiazhuang comes just weeks before the Lunar New Year holiday, the most important annual festival in China which typically sees hundreds of thousands of people traveling home to reunite with family. 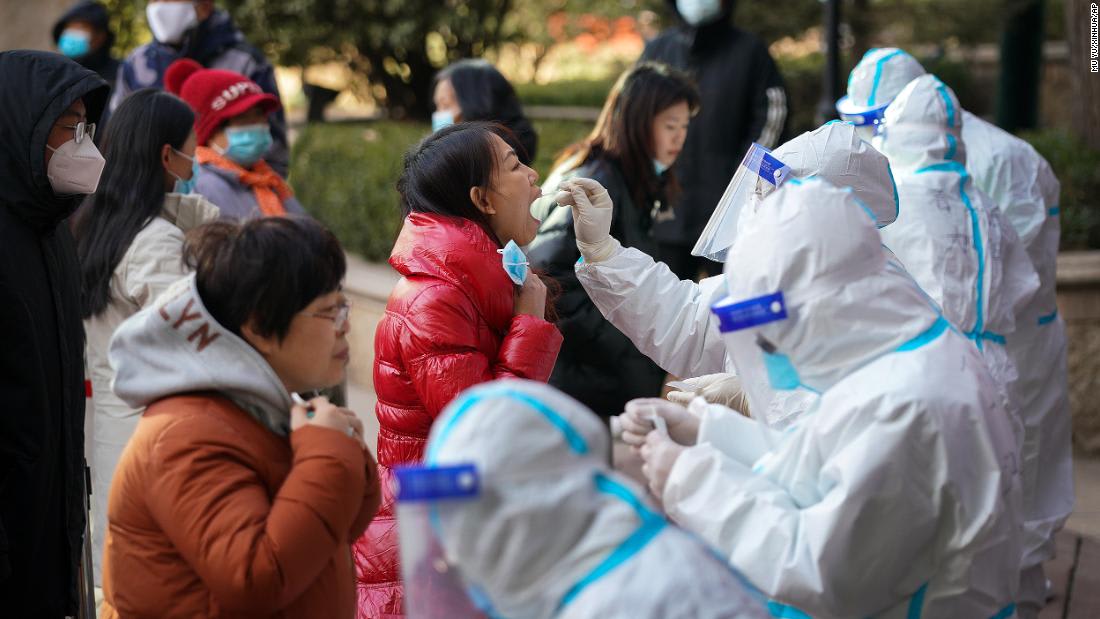 The victim was a 34-year-old man with pre-existing medical conditions. He tested positive for the virus on December 21 and died in a hospital in the capital, Thimphu, on Thursday.

The tiny South Asian country, with a population of around 750,000 people, registered its first coronavirus case on March 5 last year. Bhutan has reported 767 infections throughout the pandemic, according to data from Johns Hopkins University.

California surpassed 28,000 deaths from Covid-19 and has now recorded than 2.5 million cases of the disease.

The rate of spread indicates that the pandemic shows no sign of letting up, with the two-week positivity rate now reaching 12.9% -- the highest level recorded since widespread testing began.

Note: These numbers were released by the California Department of Public Health and may not line up exactly in real time with CNN’s database drawn from Johns Hopkins University and the Covid Tracking Project.

Each year, tourists descend on chilly Harbin, in the northeastern Chinese province of Heilongjiang, to view sculptures created from ice.

This year, the sculptures are up -- but many activities associated with Harbin's annual Snow and Ice Festival have been canceled.

According to the tourism center of Harbin Ice-Snow World, “all activities have been canceled due to restrictions on mass gathering.” Ice sculptures are still available and visitors can still buy tickets to get into the park.

“All visitors need to strengthen precautions, present their health codes when entering the park, get their temperature measured, wear masks at all times, and keep a (safe) distance from others in the park," a statement on December 29 said.

In China, everyone has a digital QR code that is color-coded depending on their health status. The code is part of the country's coronavirus controls, and needs to be presented in several situations, including taking the subway and entering cafes.

A staff member who answered CNN's calls was reluctant to say more to a foreign media outlet.

What's the situation in China? The country has had its coronavirus outbreak largely under control for months now.

But in recent days, the northern Chinese province of Hebei reported more than 300 new Covid-19 cases, prompting the provincial capital Shijiazhuang to stop travel out of the city from Thursday.

People in Brisbane rushed to stores to buy supplies as Australia's third most populous city prepares to enter a three-day lockdown.

Greater Brisbane -- home to more than 2.2 million people -- will begin a three-day lockdown from Friday night, local time, after a cleaner from a quarantine hotel tested positive for the UK coronavirus variant. The cleaner was unknowingly infectious for days before testing positive.

After the government's announcement on Friday morning, frantic shoppers rushed to the city's supermarkets -- despite authorities announcing that essential shopping would still be allowed under lockdown.

In one shopping mall, a store manager announced over the intercom that the queues were longer than those in March -- the last time the city went into lockdown.

"These lines are huge," he said. "We didn't get any warning about this ... we've now stopped people entering the store."

Within an hour of that announcement, hundreds of people could be seen lining up outside the supermarket. Security guards laid traffic cones to organize the queues, only allowing a few shoppers into the store at a time.

Annastacia Palaszczuk, the premier of Queensland state where Brisbane is located, said groceries and essentials such as medicine would still be available under lockdown.

"There is no need to rush out and panic buy," she said in a tweet. "Make sure you wear a mask and observe social distancing."

People with shellfish allergies should not necessarily skip the Covid-19 vaccine, according to the director of the US Food and Drug Administration’s Center for Biologics Evaluation and Research.

“Shellfish allergies are not a reason not to get vaccinated,” Dr. Peter Marks said Thursday during an event hosted by BlackDoctor.org, an online health resource for African Americans.

Marks advised people to let their providers know that they have a history of allergic reactions before getting vaccinated.

“All the providers that are giving the vaccine right now are prepared to deal with allergic reactions, and you should tell them, so that they might take a little bit more precaution,” he said.

He said a provider may monitor someone with a shellfish allergy for 30 minutes instead of the typical 15 after administering the vaccine.

“Right now, the only things that would prevent you from getting vaccinated is if you had a known allergy to one of the things that are in the vaccines or if you had ... a bad allergic reaction to the first shot,” Marks said.

Allergic reactions: The Centers for Disease Control and Prevention (CDC) said Wednesday that it had received reports of 29 cases of a severe allergic reaction called anaphylaxis out of the first 1.9 million coronavirus vaccine doses administered.

That adds up to a rate of 11.1 cases of anaphylaxis per 1 million doses administered. Many people with various allergies have received doses with no reactions, the CDC said.

Japan’s Health Ministry has reported a record number of new Covid-19 infections for the third day in a row as Tokyo and surrounding prefectures go into a state of emergency on Friday.

A record 7,548 new cases were recorded Thursday, the first time infections have surpassed 7,000 since the pandemic began.

The central government declared on Thursday that Tokyo and three neighboring prefectures -- Saitama, Chiba and Kanagawa -- would go into a state of emergency from Friday.

It's Japan's second state of emergency since the pandemic began.

Health Ministry data showed the number of patients in serious condition across Japan rose to 796, up 12 from the previous day. There are 43,573 patients in hospital as of Thursday.

What about Tokyo? The capital reported 2,447 new cases for Thursday, a fresh high for a second consecutive day. The daily figure in the city also surpassed 2,000 for the first time.

The number of patients in serious condition rose to 121, up eight from the previous day. There are currently 3,154 patients in hospital. The total number of cases confirmed in Tokyo now stands at 68,790.