Pfizer is "ready to release millions of doses each day" to meet the plans of the incoming Biden administration, a spokeswoman for the company has said.

"Rest assured that Pfizer is working around the clock to manufacture and is ready to release millions of doses each day, ” said Amy Rose, Vice President of Global Media Relations for Pfizer.

Her comments came in response to whether the company would be ready to meet the demand of the incoming Biden administration’s plan to release all doses of coronavirus vaccines right away.

President-elect Joe Biden will aim to release every available dose of the coronavirus vaccine when he takes office, a break with the Trump administration's strategy of holding back half of US vaccine production to ensure second doses are available.

The vaccine is given as two doses 21 days apart.

Pfizer’s current contract with the federal government is to supply the US with 200 million doses.

"Pfizer is confident in our ability to deliver 200 million doses of our vaccine to the U.S. government by July 31st. We are committed to collaborating with the Biden Administration on common-sense solutions to the challenges in vaccine distribution so that as many Americans as possible have access to our vaccine as quickly as possible," the company said in a statement on Friday.

The company says it produced 50 million doses last year with 20 million going to the US and began producing those doses in late October.

There have been at least 21,959,850 cases of coronavirus in the US, according to Johns Hopkins University's (JHU) tally of cases, and at least 370,082 people have died from coronavirus.

Friday saw the second highest number of new Covid-19 cases reported in the US in a single day, according to JHU data. The top five days for new cases were:

At least 22,137,350 vaccine doses have been distributed and at least 6,688,231 doses of the vaccine have been administered, according to the US Centers for Disease Control and Prevention.

Wendy Walsh has gone from frustrated to angry about the rollout of the Covid-19 vaccine in Florida. She wants her mom protected, fearing that if the 92-year-old gets the virus, it's essentially a death sentence.

It's like a ticking time bomb -- you're just waiting," Walsh told CNN.

Her mom, Marie Schreiner, lives in an assisted living facility in the Tampa area that recently went into lockdown because of a Covid-19 case. Walsh says she has made hundreds of phone calls to government agencies seeking information about how to get the vaccine but has gotten nowhere.

Like thousands of Floridians desperate for the lifesaving shot for themselves or an elderly loved one, she is left wondering who is in charge and why some of the most vulnerable are still waiting. Florida has recorded more than 1.4 million cases of coronavirus and more than 22,000 deaths since the pandemic began, according to data from Johns Hopkins University. State data shows about 83% of deaths were of people 65 or older.

The Covid-19 vaccine distribution in Florida started out smoothly four weeks ago, with frontline healthcare workers getting the first shots. A week later, seniors living in long-term care facilities began getting the vaccine. That's when Walsh thought her mom would get one.

The US Centers for Disease Control and Prevention (CDC) is working to confirm certain disinfectants are effective against new Covid-19 variants, according to a statement on the CDC website.

In a collaboration with the US Environmental Protection Agency (EPA), the CDC is looking into whether the disinfectants designated by the EPA for use against Covid-19 still work against new variants of the virus, like those first identified in the UK and South Africa.

The CDC says it will provide updates as new information becomes available.

There's hope: Summer vacations abroad may happen in a big way this year.

The number of people busting out of their countries will start creeping up in late spring and rise higher by mid-year, travel industry experts predict, as vaccines and risk-based safety measures are rolled out more widely and spiking coronavirus cases around the world begin to fall once again.

"I'm actually quite confident that first of May onwards ... we'll all be in a much better world," said Paul Charles, founder and CEO of London-based travel consultancy The PC Agency.

Vaccines and testing are the way forward, Charles and other industry experts say, but what's needed perhaps as desperately is greater consistency and coordination across borders.

Read the full story for the hurdles that travelers and the industry will need to overcome as travel picks up.

Three new cases of a coronavirus variant first identified in the United Kingdom have been confirmed in New York, Governor Andrew Cuomo said during a media call Saturday morning.

Two of the new cases are related to the first Covid-19 UK variant case identified last week in Saratoga County, he said.

“The sample was received from a private lab sent to the State Department of Health, which has been doing sampling. That brings the number of UK cases in this country to just about 55,” he said, reiterating he believes the UK strain of the virus is “more widespread than that number would suggest.”

UK variant in the US: At least 63 cases of the variant, first identified in the UK, have been identified in eight US states, according to data posted Friday by the US Centers for Disease Control and Prevention (CDC).

The UK has become the first country in western Europe to report more than 3 million coronavirus cases, according to government data published on Saturday.

Another 59,937 coronavirus cases have been recorded in the last 24 hours, bringing the total number of people who have tested positive for Covid-19 since the start of the pandemic to 3,017,409 in the UK.

The country also reported more than 80,000 coronavirus-related deaths, with 1,035 new deaths added to the total in the past 24 hours. The total number of deaths within 28 days of a positive test now stands at 80,868. Deaths can occur days or even weeks before they are announced and added to the dataset.

Deaths are up 51.3% from the week before, the seven-day average published on Saturday shows, while the number of people testing positive is up 22.1%.

Pope Francis has said the Vatican will begin Covid-19 vaccinations next week and that he is in line to receive the jab.

Pope Francis made the comments during an interview with Italy's Canale 5 channel, set to air on Sunday night.

“It is an ethical duty to take the vaccine, here in the Vatican we will start next week, I am also in line to take it,” he said, according to a news anchor for the channel in a preview of the interview, which was released Saturday.

The full interview, which took place in the Santa Marta residence in the Vatican, will air on Sunday at 2.40 p.m. ET (8.40 p.m. local time), according to a press release.

British health officials are scrambling to cope with the new variant of the virus that was first detected in the UK as it spreads through the public.

A new surge of coronavirus cases, fueled by the more contagious variant, is threatening to overwhelm intensive care units in the capital. Hospitals across the UK are preparing for the worst.

Are you working in a health care setting in the UK? If so, you can share your experiences with us here: 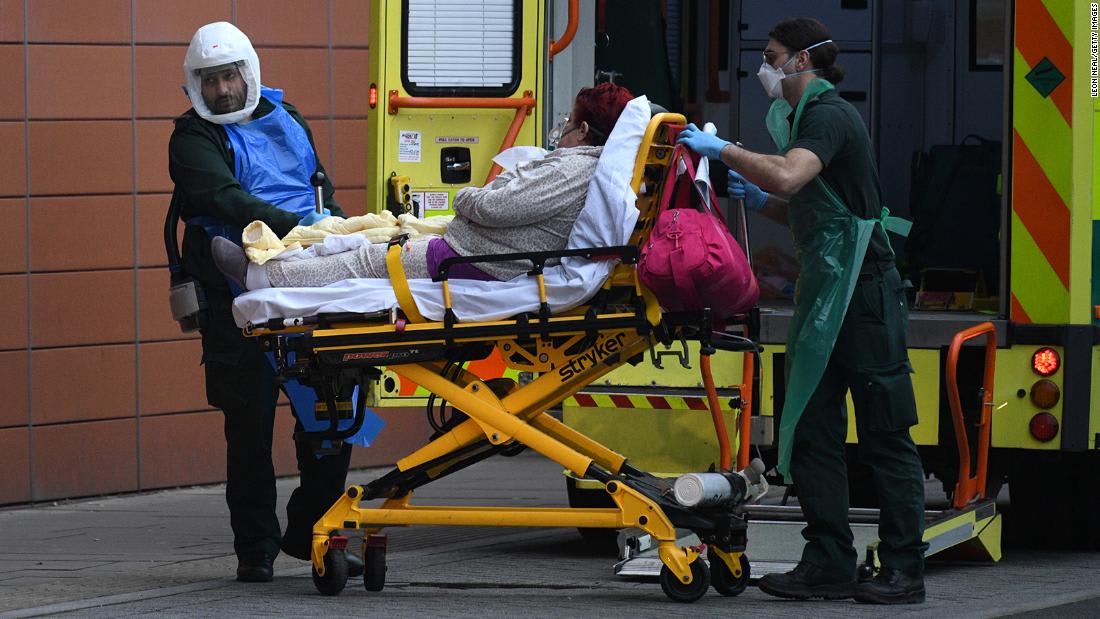 Are you a doctor, nurse or medical professional in the UK? Share your thoughts on working through the Covid-19 pandemic.