President-elect Joe Biden’s team is confident that if they release all available doses of Covid-19 vaccine immediately, people will be able to complete the two-dose regimen as planned, Dr. Celine Gounder, a member of Biden’s coronavirus advisory board says.

“I want to be very clear that we are not recommending that the second dose be delayed, so people should still get their second dose of the Pfizer vaccine at 21 days, of the Moderna vaccine at 28 days,” Gounder told CNN’s Ana Cabrera on Saturday.

So long as there are not any manufacturing glitches, we're confident that the supply of vaccine will be there when people return for their second dose,” she added.

Gounder said that having a second dose ready for each person who receives their first dose could lead to vaccines sitting on the shelves, and the new plan aims to simplify distribution.

In a sense, we've been getting in our own way, making things overly complicated,” she said.

“What we're really trying to do is just get doses out as quickly as possible, simplify the tracking that's necessary here, and we have faith that the supply will meet the need in this case,” Gounder added.

Florida health officials reported 15,445 additional coronavirus cases on Saturday, according to the Florida Department of Health (DOH), following daily increases of more than 19,000 in the last two days. The state has recorded a total of 1,464,697 Covid-19 cases, DOH data shows.

There were also 139 new Covid-19 related deaths reported on Saturday, bringing the total in the state to 23,150, DOH data shows, while Florida Agency for Health Care

Administration data shows there are currently 7,456 people hospitalized with Covid-19 in the state.

CNN is tracking Covid-19 cases and deaths in the US here:

695 deaths were reported in California on Saturday, the highest death toll in a single day in the state since the start of the pandemic.

The previous daily high was reported on December 31, with 585 total deaths, while 583 deaths were reported on January 6, the state's dashboard shows.

More than 52,000 new Covid-19 cases were reported in California on Saturday, according to the state's health department, as the number of patients currently in the ICU reaches an all-time high.

In Los Angeles County, the number of people dying of Covid-19 in a day is now equivalent to the number of homicide deaths the city saw in an entire year, while doctors warn that intensive care units in the area are filled.

The number of patients currently hospitalized stands at 22,600, down slightly from Friday's report. 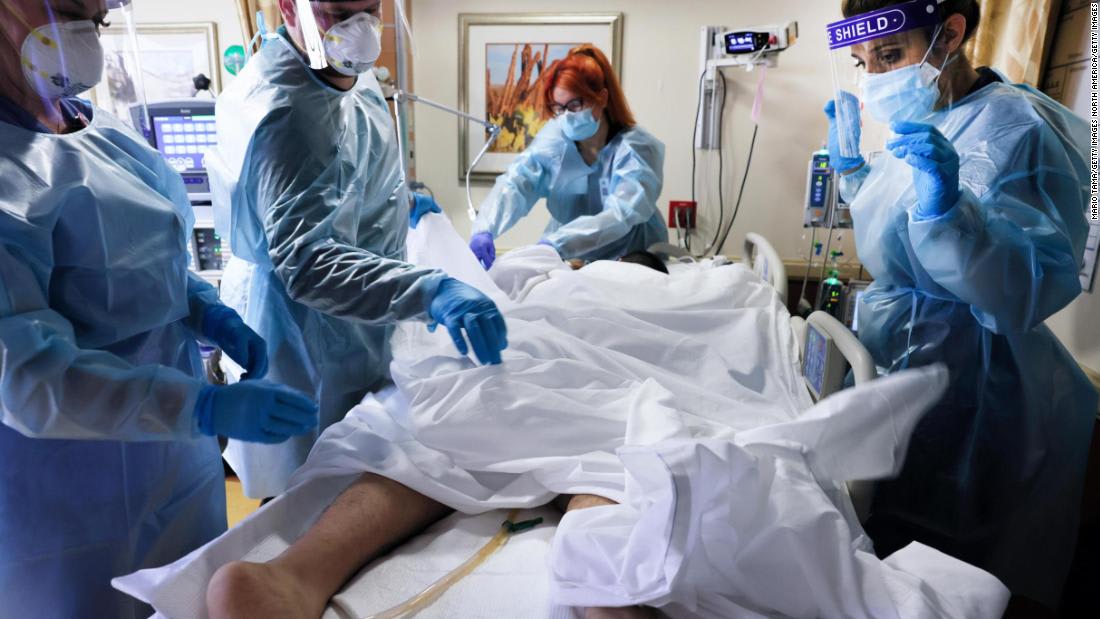 The headquarters of the Guerra and Gutierrez and Continental Funeral home chains are just several blocks away, on Beverly Boulevard, in the heart of Los Angeles’s Covid-19 death calamity.

They are in Montebello, short hearse rides from hospitals under siege from the pandemic -- with the massive Los Angeles County USC Medical Center, Adventist Health White Memorial and Beverly Hospital to name just three on a horrifying long list.

Owner Richard Gutierrez told CNN before the pandemic he would handle 28 or so memorial services at his six mortuaries in a day, with the main cause of death being cardiac arrest.

Now says he’s laying to rest an average of 56 people a day, 70 percent of them victims of the virus.

When asked about claims that the virus is fake, Gutierrez said: "Are you telling me that close to 400,000, people that have died is fake news? Try telling that to families that have just lost those people.

Try telling that to all the people in the world that have lost somebody. No, this is not fake. This is real. And it's time that you either grow up and face facts or take your blinders off."

LA County facing grim surge: The number of people dying of Covid-19 in Los Angeles County in a day is now equivalent to the number of homicide deaths the city saw in an entire year, Mayor Eric Garcetti said Thursday.

Los Angeles County reported 318 deaths on Friday, the most ever in a single day. Nearly 12,000 L.A. County residents have died from the virus in the past year.

Medical experts say the the expected Covid-19 surge after the holidays has yet to arrive -- and ICU units in the area are already filled.

Funeral homes are overrun: From Beverly Boulevard, clusters of family and friends, most Latino, dressed in black, can be seen gathering outside the overrun mortuaries.

But the mortuaries say they are delaying or turning away dozens of grieving customers a day.

Outside Continental Mortuary, owner Magda Maldonado complained of stress shredding her insides as she stood in front of a freezer trailer she bought just two weeks ago to currently store dozens and dozens of bodies.

The trailer is just feet from a shipping container, filled with more decedents, as they call them, in the funeral business.

"I am really really busy. I'm overwhelmed, I am with anxiety disorder now because of this,"  Maldonado told CNN.
"I've been medicated for that. And it's really hard to continue working like that, my employees are overwhelmed and tired, and also they're getting sick, their families are getting sick in the situation that I've never thought I was gonna go through," she added.

When asked if she would soon have to tell families that she didn't have room for bodies, Maldonado said: "that is really creating a stress for me, because I see all the calls that are going out and I'm not able to help those families."

I am used to it but I am excited and I am certain that all citizens of Israel who are about to receive the second dose of the vaccine are excited like me,” he said.

Israel is making steady progress vaccinating its citizens against Covid-19 and Netanyahu has repeated that all Israeli citizens will be vaccinated by the end of March.

Earlier on Saturday, the Health Ministry announced four cases of the South African Covid-19 variant, the first such cases reported in the country.

The Ministry reported the cases consisted of two contagion chains -- one from a person returning from South Africa, and from a family infected by a returnee.

More than two million new Covid-19 cases and 24,000 deaths have been reported in the first nine days of 2021 in the US, according to the Johns Hopkins University Covid tracker.

An additional 24,260 deaths have also been reported.

Since the start of the pandemic there have been at least 21,978,182 cases of coronavirus in the US and at least 370,119 people have died in the country.

CNN is tracking Covid-19 cases and deaths in the US here:

Houston health officials expect to inoculate about 3,600 people at one location on Saturday, triple what the city has done "on any given day," said Mayor Sylvester Turner.

The Houston Health Department partnered with the Astros Foundation to operate Minute Maid Park as a Covid-19 vaccination site on Saturday after the department’s Bayou City Event Center clinic closed for "an unrelated weekend event," said a health department statement.

The Minute Maid Park site is open only to people who already had scheduled appointed at the Bayou City Event Center, the statement said.

"We are going to be able to do up to about 3600 today, which will be significantly more than we have done", Mayor Turner said.

The city's health department opened up approximately 1,000 additional appointments for Saturday's vaccination clinic and in about 20 minutes the slots were booked, Turner said.

The new appointments were made available because of an additional 1,000 doses of vaccine delivered to the health department on Friday.

"That was unexpected in terms of the timing, we expected it to come in next week," Turner said.

"We've already seen 727 people, which is more than we see in a day at the Bayou Center," said Stephen Williams, Director for the Houston Health Department.

Vaccines will be administered to 1A and 1B groups which include health workers, residents over 65 years old and people 16 years of age and older with comorbidities, Turner said.

Both Pfizer’s and Moderna’s vaccines require two doses 21 and 28 days apart, respectively. Second doses are currently on hold by the federal government and released according to the vaccine schedule for people to complete their two dose regimen.

Biden will aim to release every available dose of the coronavirus vaccine when he takes office, but it’s unclear whether this plan can guarantee the on-time administration of second doses.

Concerns over second shot: “I think what the Biden plan is doing is, they're making a big bet, and I think an unnecessary bet,” Offit said Friday in an interview on PBS News Hour.

“What they're saying is, ‘I'm going to put all the first doses out there,’” Offit said. “Now, they're assuming that they're going to be able to mass-produce, mass-distribute and mass-administer that second dose in a timely manner.”

Offit said he’s worried that people may receive their second dose late – or not at all.

Both vaccines have shown to provide between 50-80% efficacy in the weeks following the first dose. But Offit warned “That was just for a few weeks. That's when you have just gotten the vaccine and you have an immune response. You don't know whether that's also true for two months later, three months later. It's probably not true."

With two doses administered both vaccines have been shown to be over 94% effective.

The FDA has said it does not plan to make changes to Covid-19 vaccine dosing regimens.

According to Dr. Anish Mahajan, chief medical officer at the Harbor-UCLA Medical Center, intensive care units in the Los Angeles area already filled even before the expected Covid-19 surge after the holidays.

“It takes two to three weeks for patients to get sick enough to need the hospital after they've gotten the virus, and Christmas was only two weeks ago, and we're already full,” Mahajan told CNN’s Fredricka Whitfield Saturday on CNN Newsroom.

"Yesterday we had 259 deaths, that's one more than all the homicides in 2019 in L.A. city combined," he said at a Thursday new conference. "In a single day, equal to a year of homicides."

Los Angeles County reported 318 Covid-19 related deaths on Friday, the most ever in a single day. Nearly 12,000 L.A. County residents have died from the virus in the past year.

“We don't have any more ICU capacity,” Mahajan told CNN. “All of the hospitals in the region are putting ICU patients in unusual places in the hospital just to find room for them.”

The prospect of what might unfold over the next seven to 10 days is “extremely worrying” for hospital staff, Mahajan added.