After a slow vaccine rollout, US Health and Human Services Secretary Alex Azar described on Good Morning America on Tuesday changes that will make all vaccine doses available in the US, broaden the groups states are urged to vaccinate and open more channels of administration.

Azar said the change is “just a staging, moving to the next phase on the vaccine program,” although a senior administration official tells CNN the shifts comes after two Operation Warp Speed meetings Azar held over the past 48 hours on how to speed up the lagging process.

As recently as Friday, Operation Warp Speed had pushed back on the Biden administration plan to release all available vaccine doses.

“We’ve had so much success with quality and predictable manufacturing and almost flawless distribution of the vaccine, but we have seen now that the administration in the states has been too narrowly focused,” Azar said Tuesday.

As part of the new plan, “we have already made available every dose of vaccine,” Azar said, explaining that second doses were previously held back. “We now believe that our manufacturing is predictable enough that we can ensure second doses are available for people from ongoing production. So everything is now available to our states and our health care providers.”

Second, he said, they are calling on governors to vaccinate people 65 and older and people younger than 65 with comorbidities, saying “we’ve already distributed more vaccine than we have health care workers and people in nursing homes.”

Finally, “we’ve got to get to more channels of administration, we’ve got to get it to pharmacies, get it to community health centers,” he said, adding that they are there and will deploy teams to supports states doing mass vaccination efforts if they wish to do so. He also said “it has been overly hospitalized so far in too many states.”

Lebanon will bring in a 24-hour curfew on Thursday, intensifying an existing lockdown to curb a surge in coronavirus cases. For the first time it will also include food stores, which will only be allowed to open for delivery.

In a National Supreme Council meeting, the Prime Minister of the caretaker government Hassan Diab said: “Unfortunately, we are facing a frightening health situation, the coronavirus pandemic has spiraled out of control due to the stubbornness of people and their insurgence against lockdown measures which we have taken.”

Here's where things stand elsewhere in the Middle East:

Obeidat said that vaccinations will start as early as Wednesday with vulnerable groups, including the elderly with chronic diseases and frontline health workers to be vaccinated as a priority.

The United Arab Emirates has surpassed one million doses of vaccine administered, according to data from the National Emergency Crisis and Disaster Management Authority. These doses have mainly gone to frontline workers, according to state news agency WAM. The UAE is the second highest country in vaccinations rates globally after Israel.

The country has just been removed from the UK's travel corridor list due to rising cases there.

Egypt will receive its first doses of the AstraZeneca vaccine within three weeks, with the government expecting to issue emergency approval this week, the Health Minister Hala Zayed said in a news conference on Monday.

The country has been facing a resurge in coronavirus cases over the past two months, amidst relaxed measures and restrictions.

Algeria will be receiving its first batch of the Russian-made Sputnik V vaccine in the coming few days, Health Ministry spokesman Djamel Fourar said on Monday, according to state-owned Algeria Press Service.

Algeria is the first African nation to register Russia’s Sputnik V vaccine for emergency use, according to the Russian Direct Investment Fund.

Iran is planning to import almost 2 million doses of vaccines from India, Russia and China by the end of the first quarter of the year, the head of the Iran’s Medical Council said on Monday.

“The Iran-made vaccine is much safer than many of the foreign versions,”  Mohammadreza Zafarghandi said according to state news agency IRNA. But because production of the Iranian vaccine will take time, Iran intends to import two million doses of vaccines by the end of March, IRNA said.

Iran’s Supreme Leader Ali Khamenei said he does not trust coronavirus vaccines produced by the Western countries and called on officials to prohibit American and British vaccines from entering the country.

The US Department of Health and Human Services is expected to announce sweeping changes in vaccine rollout guidelines today in an effort to boost the lagging number of vaccinations in the first month of the campaign.

The official expects reserved doses to be distributed over the next two weeks.

The new plan would also change guidelines to allow vaccinations immediately for anyone older than 65 and would help states set up mass vaccination sites should they request assistance.

The administration wants to shift focus away from hospitals and focus more on adding more accessible venues, such pharmacies, the source said.

The changes are expected to be announced at Operation Warp Speed's briefing at noon on Tuesday.

They come after two Operation Warp Speed meetings held by HHS Secretary Alex Azar over the past 48 hours on how to speed up the lagging process, according to the official.

The Dutch municipality of Lansingerland will test all of its residents from the age of two for Covid-19, following an outbreak in a primary school which included cases of the more transmissible UK variant.

Everyone living in the town, with or without symptoms, will receive an invitation on Wednesday for a test, the town said in a statement. According to the Dutch Statistics Bureau, Lansingerland had 63,267 residents as of November 2020.

Public health authorities want to get a better picture of the spread of the new strain that was first detected in the UK, the statement added. Lansingerland is the first municipality in the Netherlands that is being asked to participate in "risk-oriented large-scale testing."

The Netherlands is currently under a national lockdown and overall case numbers and hospital admissions are declining.

The Swiss authority for medicines and medical devices, Swissmedic, has approved the Moderna Covid-19 vaccine, the regulator said Tuesday.

The Moderna vaccine is the second Covid-19 vaccine to be approved in Switzerland, after Pfizer/BioNTech’s approval in December.

New data from the UK's Office for National Statistics (ONS) shows just how deadly the pandemic has been for England and Wales.

The data released on Tuesday state that 608,002 deaths were registered in England and Wales in 2020, nearly 76,000 more than what the ONS said would be expected based on the five-year average between 2015 and 2019.

According to the ONS, the number of deaths was 77,161 higher than the number registered in 2019, the biggest year-on-year increase since 1940.

The new figures also show that in terms of total number of deaths, 2020 was the deadliest year in England and Wales since 1918, the year when the First World War and the Spanish Flu pandemic coincided.

But context is also key here. The population of England and Wales increased dramatically between 1918 and 2020, by about 26 million. That means that the death rate -- or the proportion of the population that lost their lives -- was much higher in 1918.

The Chinese city of Langfang, which lies next to Beijing and has nearly 5 million residents, has gone into a “soft lockdown” after new Covid-19 cases were identified in Hebei province.

Residents of the city were advised not to leave home for seven days unless necessary.

Hebei province's Vice Governor Xu Jianpei announced a second round of mass testing would begin in the cities of Shijiazhuang, Xingtai, and Langfang. The first round, which saw 17 million people getting tested, wrapped up Sunday.

Of the new confirmed cases, 39 were reported in Shijiazhuang, while one was reported in Langfang, the Hebei Health Commission said.

China reported a total of 136 new coronavirus infections on Tuesday, according to the country’s National Health Commission.

California's surge of Covid-19 has just got even worse, after at least two gorillas at the San Diego Zoo became infected with the virus, the zoo and Gov. Gavin Newsom said Monday.

Three animals are currently showing symptoms of the virus, and it is suspected that they were infected by an asymptomatic staff member, according to a press release.

This is the first known instance of coronavirus in great apes, the zoo said, though previous research has shown that some non-human primates are susceptible. The gorillas live as a family, so it is assumed that all members have been exposed, zoo officials say.

It started last Wednesday, when two zoo gorillas began coughing. A preliminary test within the group showed presence of the virus on Friday, and the US Department of Agriculture's National Veterinary Services Laboratory confirmed the positive results Monday.

It is unknown whether the gorillas will have any serious reaction, the zoo said, but they are being closely monitored. 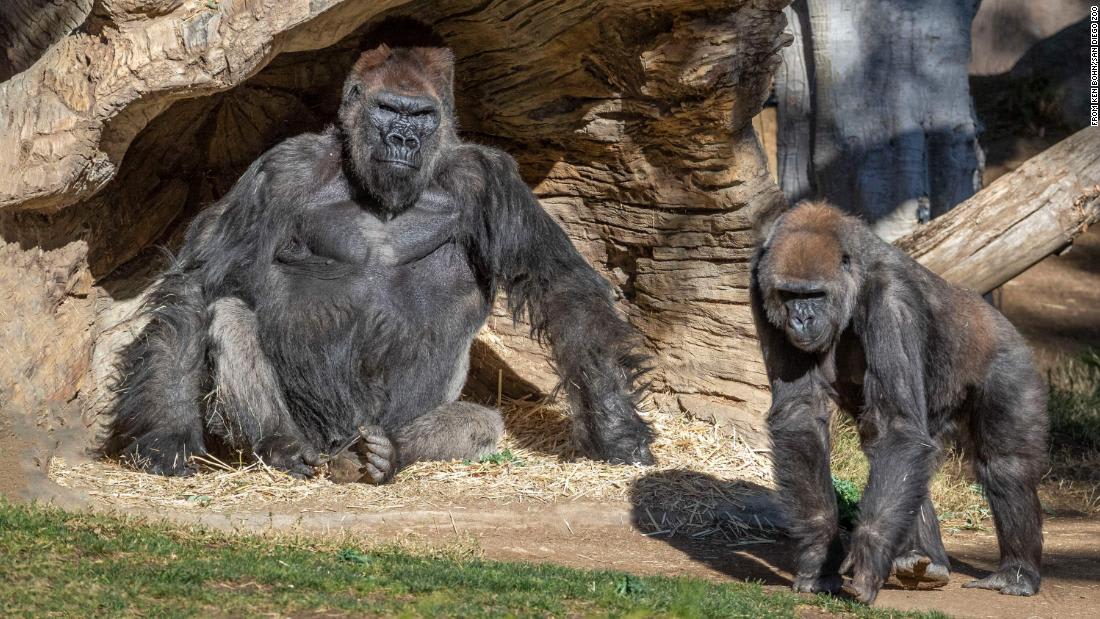 At least two gorillas at San Diego Zoo tested positive for Covid-19, in the first known cases among great apes

New Zealand has announced that all travelers, apart from those from Australia, Antarctica and some Pacific Island nations, will be required to take a Covid-19 test upon arrival in the country.

“Given the high rates of infection in many countries and evidence of the global spread of more transmissible variants, it’s clear that most global air routes will be of critical concern for the foreseeable future, and we must respond strongly to the evolving situation,” Covid-19 Response Minister Chris Hipkins said in a press release on Tuesday.

New Zealand has not reported any new locally transmitted Covid-19 cases in several weeks and Prime Minister Jacinda Ardern has been widely praised for her effective handling of the virus, from which only 25 New Zealanders have died.

The measures announced on Tuesday were previously in place for travelers from the US and UK and will go into effect for all other countries on January 18.

Hipkins also said they will add further measures to arrivals from the US and UK, requiring them to have a negative Covid-19 test result 72 hours prior to departure.

“New Zealand already has some of the most stringent border protection measures in the world. Today’s amendments further strengthen that position in line with the Government’s overall elimination strategy,” Hipkins said.

Entry rules were already very tight, with only New Zealand citizens and residents allowed to travel into the country, with a few exceptions for partners, dependents and critical workers.