Even as the United States broke a record for the number of Covid-19 deaths reported in a single day, Dr. Paul Offit told CNN’s New Day there were several reasons to be hopeful that the coronavirus situation could get “dramatically better” soon.

Offit, director of the Vaccine Education Center at the Children’s Hospital in Philadelphia and a member of the US Food and Drug Administration’s Vaccines and Related Biological Products Advisory Committee, acknowledged the “awful” numbers are likely to continue for a few months, but said there are reasons for optimism:

There are two “remarkably effective” vaccines and “we’re finally starting to get how to mass administer,” Offit said, citing examples such as the Pennsylvania Convention Center or the Dodger Stadium. Meanwhile two more vaccines – those from Johnson & Johnson and AstraZeneca -- “are right around the corner,” he added.

“The weather will get warmer, when the weather gets warmer, that makes it much more difficult for this virus,” Offit said, explaining that when it is hot and humid, the virus, which is spread by small droplets, spreads less easily.

Offit said the incoming Biden administration “isn’t into this cult of denialism” that surrounded the Trump administration’s coronavirus response, and it would “take this problem head on.”

“That’s 20% of the population that when they’re re-exposed to this virus are not going to become sick with it,” he said, although it’s not clear how long immunity after infection lasts.

If another 55 to 60% of the population can be vaccinated -- something which Offit said can be done at a million to a million and a half doses a day -- “then I really do think that by June we can stop the spread of this virus.”

It was the first time since the pandemic began that Cuba had reported more than 500 new cases in a single day.

The communist-run island had managed the outbreak more effectively compared to much of the rest of the region by closing borders, requiring masks in public and isolating people who were infected.

But, after opening borders in late 2020, Cuba has seen a surge of new cases, Cuban health officials said.

The island has a total of 16,044 cases and 158 deaths, according to Health Ministry data.

Government officials said they are reducing flights to the island and from Thursday will close many schools in order to stem the spread of the virus.

Portugal on Wednesday set a new daily record for Covid-19 related deaths and a new record number of daily infections, according to the Health Ministry.

Ministry data shows that Portugal registered 156 coronavirus related fatalities -- making it the country's deadliest day since the start of the pandemic -- and bringing the total death toll to 8,326, according to the new data.

Portugal has also recorded its highest daily case count with 10,556 new cases, with the total reaching 507,108.

The grim numbers come as a new lockdown is expected to be announced for Portugal later on Wednesday.

Switzerland has introduced further measures in response to the new coronavirus variant, President Guy Parmelin announced Wednesday, without specifying which variant he meant.

As of Monday, all non-essential shops will have to close, excluding those for click and collect, said Alain Berset, member of the Swiss Federal Council, who outlined the new measures.

The current closure of restaurants, sports sites and hotels will also be extended until the end of February.

Working from home will be mandatory, where possible. If individuals have to go to their place of work, they have to wear a mask in closed spaces with two or more people.

Gatherings inside and out will be limited to five people, rather than the current ten, Berset said.

Switzerland (along with Lichtenstein) has confirmed 3,001 new positive cases of Covid-19 in the past day and 58 new deaths, bringing the total number of deaths during the pandemic to 7,851, according to government data.

The production pace of the Covid-19 vaccine being developed by drugmaker Johnson & Johnson's subsidiary Janssen appears to be behind schedule.

The New York Times reported on Wednesday that Operation Warp Speed's lead manufacturing adviser Dr. Carlo de Notaristefani acknowledged a delay, but said the company might be able to catch up with its original production goals by March. The vaccine is delivered as a one-dose shot could help ramp up vaccination efforts as the United States continues to fight a devastating pandemic.

"I agree there was a problem," de Notaristefani told The New York Times. But he added, "Manufacturing of pharmaceuticals is not a black box where you turn the key and start counting."

Meanwhile, results from the vaccine's clinical trial are expected soon.

Johnson & Johnson could apply for emergency use authorization of its Janssen Covid-19 vaccine around the end of this month, Operation Warp Speed Chief Scientific Adviser Moncef Slaoui said during a briefing on Tuesday. Slaoui said millions of doses should be available by the end of February.

CNN has reached out to Johnson & Johnson for a response.

A large proportion of doctors and nurses have been traumatized by working in intensive care during the coronavirus pandemic in the UK, a new study reveals, with almost half reporting symptoms of post-traumatic stress disorder (PTSD), anxiety or depression, and some feeling they would be better off dead.

The study -- which has not yet been peer reviewed -- was published Wednesday by researchers at King's College London. It analyzed the responses to an anonymous online survey in June and July of more than 700 doctors and nurses working in intensive care units (ICUs) across six different hospitals.

Although nearly 60% of respondents reported good well-being, the study found that almost half of ICU staff reported symptoms consistent with a probable diagnosis of PTSD, severe depression or anxiety, or problem drinking.

Almost one in seven (13.4%) of ICU staff reported frequent thoughts of being better off dead, or of hurting themselves in the past two weeks.

Jessica Filoteo, a nurse who was moved to work in an intensive treatment unit, said "I felt consumed. It was awful".

"I was constantly on edge and would cry for no particular reason," she told the Royal College of Nursing. The nursing union urged anyone struggling to ask for help in their workplace or via the NHS People confidential helpline.

As the UK struggles to contain the surge of cases, government and senior health officials have warned that many hospitals are on the verge of being overwhelmed. At a news conference Monday, Hancock said the variant was "putting the NHS [National Health Service] under very significant pressure," with Covid-related hospital admissions up 22% on just the previous week. 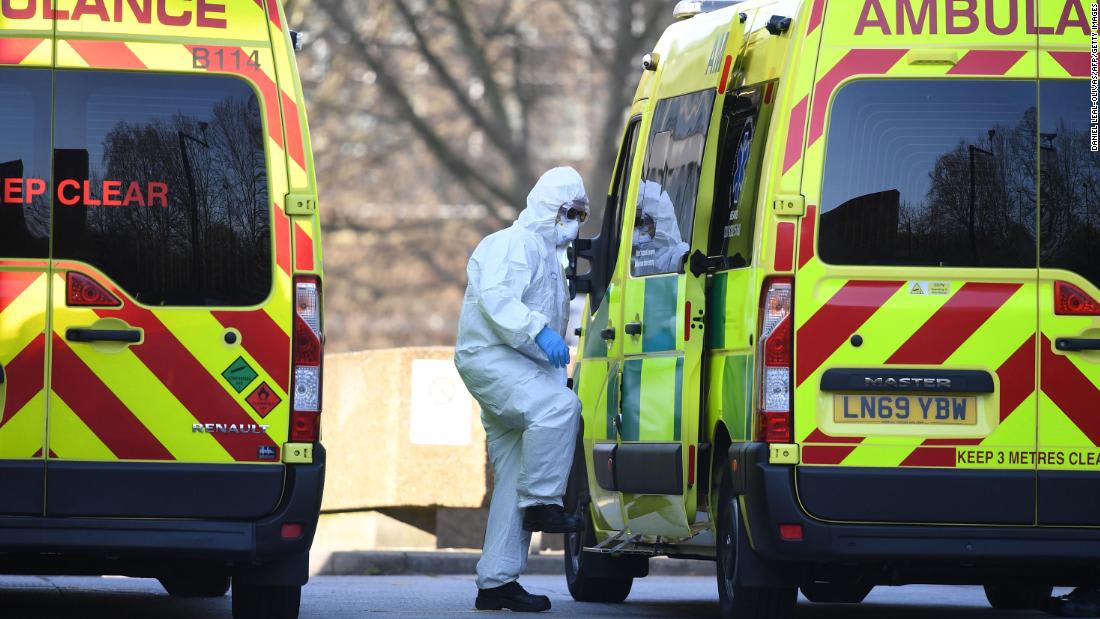 Russian President Vladimir Putin has ordered his government to step up its inoculation efforts, launching a “mass vaccination” push that will start next week.

Russia began a “large-scale” coronavirus vaccination program, as Putin previously called it, in December -- but it is not clear exactly how many people have been vaccinated as part of this drive.

“I ask [you] to prepare the necessary infrastructure. Thank God, our vaccine does not require any unusual conditions for transportation, like [storing it at] -50 C, -70 C, everything is much simpler and more efficient with us,“ Putin said Wednesday in a televised government meeting.

“So I ask you to start mass vaccination of the entire population from next week and build an appropriate schedule, as we do with other diseases, for example, the flu,” Putin added.

Russia approved its first Covid-19 vaccine, Sputnik V, in August. The news of its approval ahead of large-scale Phase 3 trials necessary to test its safety and efficacy drew considerable criticism from scientific and medical circles.

Russian Deputy Prime Minister Tatyana Golikova said that by this Thursday, an additional 600,000 doses of vaccine will be dispatched to the country’s regions.

"By the end of January... there will be 2.1 million doses of vaccine, and we will seriously need to step up the vaccination campaign," she added.

On Sunday, the head of Russia’s health regulator Rospotrebnadzor said that the new variant of coronavirus detected in the United Kingdom has been discovered in Russia in a patient who recently returned from the country.

Speaking on Wednesday, Putin said he is “concerned” about the spread of coronavirus in the UK.

Manchester United footballer Marcus Rashford says he has spoken to the UK Prime Minister Boris Johnson amid a growing row about Covid poverty and the government provision of free meals to school children.

The England international striker has become a vocal campaigner on child poverty, after speaking out about his own difficult upbringing and the struggles of his mother to keep his family fed.

Following his activism throughout the pandemic, the UK government has committed to sending food parcels via a private company for children who were receiving free school meals -- reversing its previous position to not do so.

But there has been a growing uproar over the paucity of these provisions, after pictures of the offerings were shared on social media. One of the viral photos showed carrot stubs and half-peppers included in the weekly food parcels.

“Just had a good conversation with the Prime Minister. He has assured me that he is committed to correcting the issue with the food hampers and that a full review of the supply chain is taking place," Rashford tweeted on Tuesday. "He agrees that images of hampers being shared on Twitter are unacceptable.”

On Twitter, the prime minister said he agreed with Rashford and called the food parcels "disgraceful." But Keir Starmer, the leader of the opposition Labour Party, said the photo that sparked the furor showed a package closely resembling the government's own guidance on what should be included.

Schools in the UK are currently closed, with the country in its third coronavirus lockdown.

The Vatican started administering Covid-19 vaccines on Wednesday, its spokesman Matteo Bruni said in a statement.

Vaccinations are taking place in the Vatican auditorium, where Pope Francis often holds his weekly general audiences, he said.

The Vatican did not say whether the Pope has been immunised yet or who the first recipients were.

Pope Francis said over the weekend that he is in line to receive the shot. "It is an ethical duty to take the vaccine... I am also in line to take it," he said in an interview with Italy’s Canale 5 channel.

In December, the Vatican deemed that it was morally acceptable to be vaccinated against Covid-19, after some anti-abortion groups raised concerns about how the vaccines were manufactured. 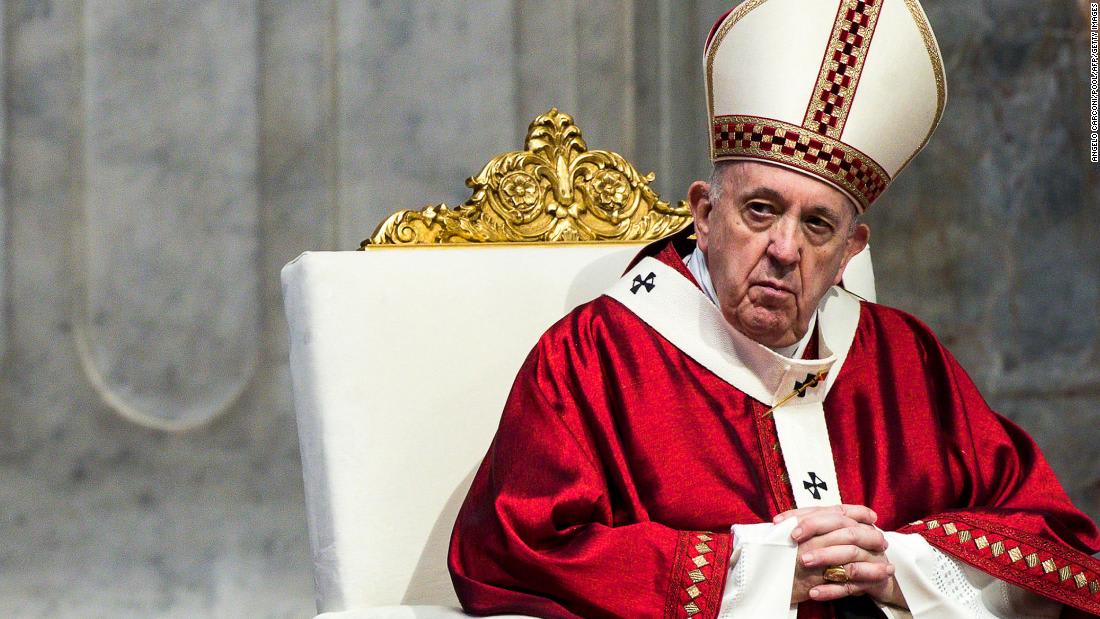