The World Health Organization team tasked with investigating the origins of the Covid-19 outbreak in Wuhan has arrived in China, state broadcaster CGTN announced on Thursday.

The group's successful arrival comes after WHO announced last week that the team had been blocked from entering China as the necessary permissions to enter the country had not been approved.

WHO Director-General Tedros Adhanom Ghebreyesus said last week he was "very disappointed," in a rare rebuke of China from the UN agency.

For months, WHO officials had been negotiating with Beijing to allow a team of global scientists access to key sites to investigate the origin of the virus -- first detected in Wuhan in December 2019 -- and its likely jump from an unidentified host species to humans.

"The former President is under medical supervision and fulfilling the isolation that's required in pandemic situations," the press officer said.
"He has mild symptoms such as a little cough and his situation is stable."

As of Wednesday, Bolivia has reported 176,761 confirmed cases of Covid-19 and 9,454 deaths, according to Johns Hopkins University.

There’s a risk that initial protection against Covid-19 could decrease if the administration of the second dose of the Pfizer/BioNTech vaccine is delayed, BioNTech CEO Ugur Sahin said Wednesday.

The second dose of the Pfizer/BioNTech’s Covid-19 vaccine is supposed to be administered 21 days after the first shot.

Sahin said that governments and health institutions may need do their own risk-benefit analysis when it comes to getting doses out more quickly.

“There is this discussion that it could be a benefit for the society if the second dose is delayed and more people are vaccinated,” he said.

Pfizer/BioNTech’s Covid-19 vaccine was authorized in the United States last month based on data showing it was 95% effective in preventing symptomatic disease. But it remained unclear whether the vaccine prevented people from becoming infected with the virus and spreading it asymptomatically.

Sahin said animal research has suggested that the vaccine is able to provide protection from infection, and that’s the “key to prevent transmission.”

Approximately one in three residents in Los Angeles County has been infected with Covid-19 since the start of the pandemic, according to new data published by the county.

Workplace outbreaks are occurring at grocery stores, convenience stores, warehouses, manufacturing facilities, and many other workplaces where people come together on a daily basis.

“In just over a month, outbreaks at these worksites increased from 9 per week on November 1, to 44 per week on December 6 -- nearly a fivefold increase,” the department said.

The county has also experienced an increase in outbreaks in schools and daycare settings.

“While almost all the outbreaks were small and well-contained, dozens of staff and a small number of students were affected,” the department said.

It warned that these increases reflect a pattern of transmission from worksite to home and back to worksites.

Infection rate: The Los Angeles County Department of Health Services’ epidemic model estimates that about one in 115 residents are currently infectious to others compared to one in 125 a week ago.

Hospitalizations: According to county health officials, the number of new patients requiring hospitalization due to the virus has “increased markedly in December,” but “has appeared to level off.”

“We have not yet fully seen the effect of transmission in the period from around Christmas to New Years,” they said Wednesday.

Due to the time required for new exposures to result in illness severe enough to require hospitalization, health officials explained that the extent of transmission occurring during the last 10 days in December through New Year’s remains unclear.

“This makes it difficult to reliably predict demand for hospital-based services,” they said.

Officials predict a continued shortage of ICU beds and ventilators over the next four weeks.

China has reported its first Covid-19 related death in 242 days as daily new infections reached the highest levels since July, according to health authorities.

The individual died on Wednesday in Hebei province, which has been at the center of China’s most recent outbreak of the coronavirus.

The NHC also recorded an additional 78 asymptomatic cases detected on Wednesday. China does not include asymptomatic patients in its tally of confirmed cases.

Many NFL and Major League Baseball stadiums, from New York to Los Angeles, have been Covid-19 testing sites -- and now some of those same facilities are being repurposed again as Covid-19 vaccination centers.

That balance is the crux of an issue that public health officials have grown more concerned about, Dr. Marcus Plescia, chief medical officer at the Association of State and Territorial Health Officials, told CNN on Wednesday.

"Converting some of those large-scale venues from testing to vaccination, at least for the time being, makes sense -- just because we do have to start to scale up the vaccination, but I think there's a balance," Plescia said.
"We can't just switch everything over to vaccinations," he said. "We need to continue to have some resources where people can get tested." 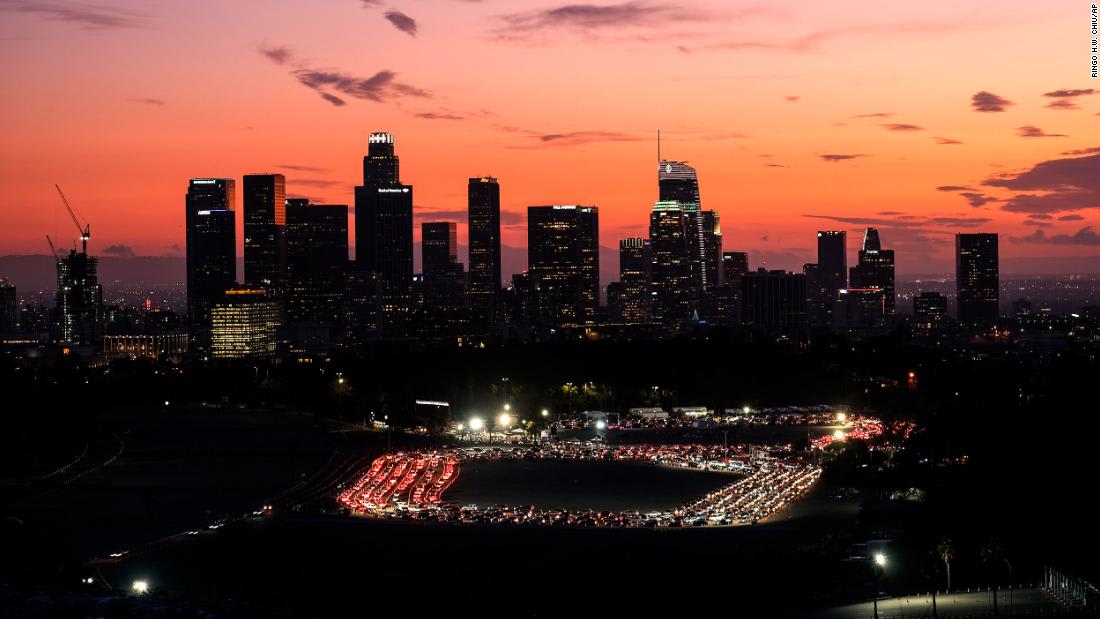 The White House coronavirus task force again suggested the existence of “more transmissible” strains of Covid-19 and a “much more rapid” spread of the virus, in its weekly reports to states.

“This fall/winter surge has been at nearly twice the rate of rise of cases as the spring and summer surges. This acceleration and the epidemiological data suggest the possibility that some strains of the US Covid-19 virus may have evolved into a more transmissible virus,” the report, dated January 10 and obtained by CNN, said.
“Given that possibility, and the presence of the UK variant that is already spreading in our communities and may be 50% more transmissible, we must be ready for and mitigate a much more rapid transmission.”

Last week, the US Centers for Disease Control and Prevention shot down an item included in the January 3 task force state reports that suggested there was a homegrown “USA variant” of coronavirus, a misperception that began on a call with governors, an administration official told CNN.

But the official made it very clear US health officials have not determined that a US variant of the virus exists.

After the holiday season, the US is now seeing “clear continuation of the pre-holiday high rate of spread as measured by rising test positivity, increased cases, increased hospitalization rates, and rising fatalities," the report said.

There is “full resurgence” of viral spread in “nearly all metro areas,” the reports said, calling for “aggressive action.” The task force outlined measures including the use of masks that are “two or three ply and well-fitting,” as well as “strict physical distancing," and more proactive testing of young adults.

This week’s reports raised concerns about “significant, continued deterioration from California across the Sunbelt and up into the Southeast, Mid-Atlantic, and Northeast,” so, essentially, the entire continental US.

And as the nation lags in administering vaccinations, the task force emphasized the need to “put (vaccines) in arms now,” noting that “active and aggressive immunization in the face of this surge would save lives.”

An ensemble forecast published Wednesday by the US Centers for Disease Control and Prevention now projects there will be 440,000 to 477,000 coronavirus deaths in the United States by February 6.

Unlike some individual models, the CDC’s ensemble forecast only offers projections a few weeks into the future. The previous ensemble forecast, published January 6, projected up to 438,000 coronavirus deaths by January 30.

At least 384,343 people have already died from Covid-19 in the US, according to data compiled by Johns Hopkins University.

Turkish health regulators approved the Chinese Sinovac Covid-19 vaccine for emergency use on Wednesday, clearing the way for a mass vaccination program to begin on Thursday.

“The scientific data has been evaluated and 14-day testing of samples taken from the batches that have arrived have been examined in our laboratories... Emergency use authorization has been issued," the Turkish Drug and Medical Device Administration said in a statement.

Immediately after the announcement, Turkish Health Minister Fahrettin Koca received the first dose of the vaccine on live television. He told reporters that he and other members of the Pandemic Science Council are being vaccinated immediately and rollout across all 81 provinces in Turkey will begin on Thursday.

The administration did not release details about the data used to determine the vaccine’s safety and efficacy. Advanced, Phase 3 trials are ongoing in Turkey, but the vaccine is also being tested in other countries, including Brazil.

Questions over Sinovac data: On Tuesday, the government of Sao Paulo published data showing that the Sinovac vaccine was just 50.38% effective in late-stage trials in Brazil, significantly lower than earlier results showed.

While the number exceeds the threshold required for regulatory approval, it falls far below the 78% previously announced.