Covid-19 monoclonal antibody treatments are being "underutilized," according to the US Department of Health and Human Services. And now, HHS officials are urging the public to use these therapies to treat illness.

The US Food and Drug Administration has authorized convalescent plasma and monoclonal antibody treatments for emergency use in Covid-19 patients.

"The bottom line is these medications work better, they work best when given early," US Surgeon General Dr. Jerome Adams said during a briefing on Thursday.

"So if you have Covid symptoms or if you’ve had a high risk exposure, we need you to get tested right away," Adams said. "And if you test positive, we need you to ask your provider about monoclonal antibodies as a way of keeping you out of the hospital.”

Dr. Janet Woodcock, therapeutics lead for Operation Warp Speed, said in Thursday's briefing that those medications "are being somewhat underutilized" and HHS hopes to change that.

"The antibodies are not in shortage," Woodcock said.

"We want to keep people out of the hospital," she said. "We hope the changes that we’re making -- better public awareness and better provider awareness -- will drive more administration of these antibodies."

Last month, HHS Secretary Alex Azar said that the United States has "a surplus" of monoclonal antibody treatments from the companies Regeneron and Eli Lilly.

“Travel from Portugal to the UK will also be suspended given its strong travel links with Brazil -- acting as another way to reduce the risk of importing infections,” Shapps said, adding that hauliers transporting essential goods were exempt.

He added that these measures would not apply to British and Irish citizens and other nationals who have UK residence rights, but arriving passengers would have to quarantine for 10 days.

All parts of the UK are currently under strict lockdown with international travel only allowed for a limited number of reasons. The country is in the midst of its worst wave of Covid-19 infections with record daily deaths reported on Wednesday.

Erdogan announced that he received the shot on his Telegram account. “I just got the vaccine,” he wrote, followed by a smiley face emoji.

Turkey began its vaccination rollout across all 81 provinces on Thursday, starting with frontline workers.

As of 6:30pm local time, more than 252,811 people had received the first dose of Sinovac, according to the Turkish health ministry Covid-19 online vaccine counter.

Turkey received 3 million doses of Sinovac on December 30 and granted emergency authorization for the vaccine on Wednesday after mandatory safety testing by its drug and medical device administration was complete.

Earlier this week new data from Brazil indicated the Sinovac vaccine was far less protective against Covid-19 than originally reported, with results suggesting it was only 50.38% effective in late-stage trials.

Turkey had its worst peak of cases in early December. More than 2.3 million infections and at least 23,325 Covid-related deaths have been reported there, according to Johns Hopkins University. 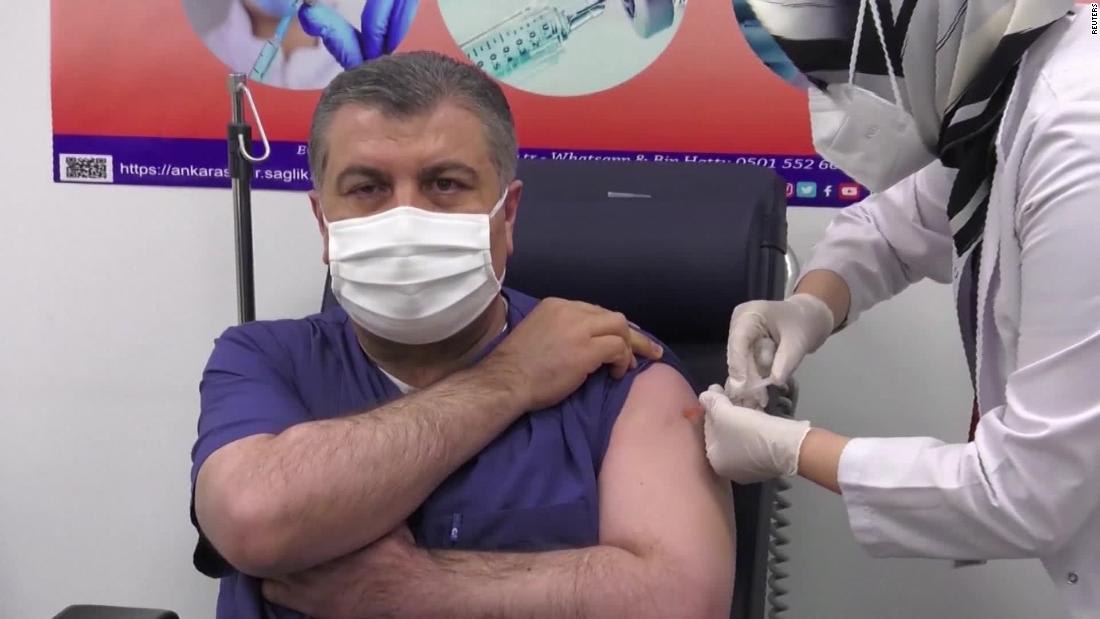 More than 20,000 citizens from 12 villages in the Gaocheng District of the Chinese city of Shijiazhuang have been relocated to quarantine sites as a preventative measure against Covid-19, according to Chinese state media.

Hebei Province, of which Shijiazhuang is the capital, has been at the center of China’s most recent outbreak of the pandemic.

The NHC reported 138 new Covid-19 infections on Wednesday, including 14 imported cases. Of the 124 locally transmitted cases, 81 cases are from Hebei province.

Hebei’s vice governor Xu Jianpei announced on Tuesday that a second round of mass testing programs would begin in the cities of Shijiazhuang, Xingtai and Langfang. The province’s first round of testing of 17 million people ended on Sunday.

Construction has also started on a centralized medical center in Shijiazhuang. It’s set to cover 33 hectares and will have 3,000 makeshift wards, CGTN reported.

On Wednesday one person was reported to have died from the virus in Hebei province, the first fatality in China for 242 days.

Jordan’s King Abdullah II received the coronavirus vaccine on Thursday, as the country started rolling out inoculations to certain parts of the population, a statement from the Royal Court said on Twitter.

On Wednesday, Jordan began its Covid-19 vaccination program in 29 centers across the kingdom.

The government said it aims to inoculate at least 20% of the population in the coming months, free of charge, starting with people over the age of 60, those suffering from chronic illnesses and health care workers.

The Royal Court did not clarify which vaccine the King was given.

Covid-19 cases in Africa have now topped 3 million and daily cases have surpassed the peak of the first wave, according to the World Health Organization (WHO).

The continent is now faced with “emerging variants” of the virus, WHO Africa said in a statement on Thursday.

On average, 25,223 cases were reported each day across the continent from December 28 to January 10, according to the release. These numbers are "nearly 39% higher than the July 2020 two-week peak of 18,104 daily average cases," it added.

The UN body cautioned that the worst may be yet to come, saying that Africa's numbers "may rise further in the coming days in the wake of travelling, gathering and festivities over Christmas and New Year holidays."

The WHO said that the new variant of the virus first discovered in South Africa is "accounting for most of the new infections during the second wave."

"Genomic sequencing has found the variant present in Botswana, the Gambia and Zambia" the release added.

Despite no indications thus far of the presence of the another variant, first found in the UK, on the African continent, "further investigation is needed," according to the WHO.

Dr. Matshidiso Moeti, the WHO Regional Director for Africa commented that “even if the new variant is not more virulent, a virus that can spread more easily will put further strain on hospitals and health workers who are in many cases already overstretched."

Moeti called on all African countries to "increase testing and sequencing of the virus to swiftly spot, track and tackle new COVID-19 variants as soon as they appear."

"To defeat an agile, adaptive and relentless enemy, we must know and understand its every move, and double down on what we know works best against all variants of the virus."

The UK is battling a new variant of the coronavirus, and officials are warning that the country's health service is on the verge of being overwhelmed in some places.

CNN wants to hear from doctors, nurses and other medical professionals in the UK about the current situation on the frontline.

The African Union has secured an additional 270 million Covid vaccine doses for African countries, but it still may not be enough to meet demand for the region, the African Vaccine Acquisition Task Team (AVATT) announced Wednesday.

At least 50 million doses will be available from April to June 2021 from Pfizer, AstraZeneca (through the Serum Institute of India) and Johnson & Johnson, according to an AVATT press release.

African Union Chair and South African President Cyril Ramaphosa said: "From the onset of this pandemic, our focus as a continent has been on collaboration and collective effort. We have held steadfastly to the principle that no country should be left behind.

"All 270 million vaccine doses will be made available this year with at least 50 million being available for the crucial period of April to June 2021," he added.

These vaccines have been secured alongside a vaccine program from COVAX -- a World Health Organization and Gavi Vaccine Alliance initiative to bring more vaccines to Africa on a fair basis.

Ramaphosa cautioned that while the initiative was "vital" it may "not extend beyond the needs of frontline health care workers, and may thus not be enough to contain the ever-increasing toll of the pandemic in Africa." 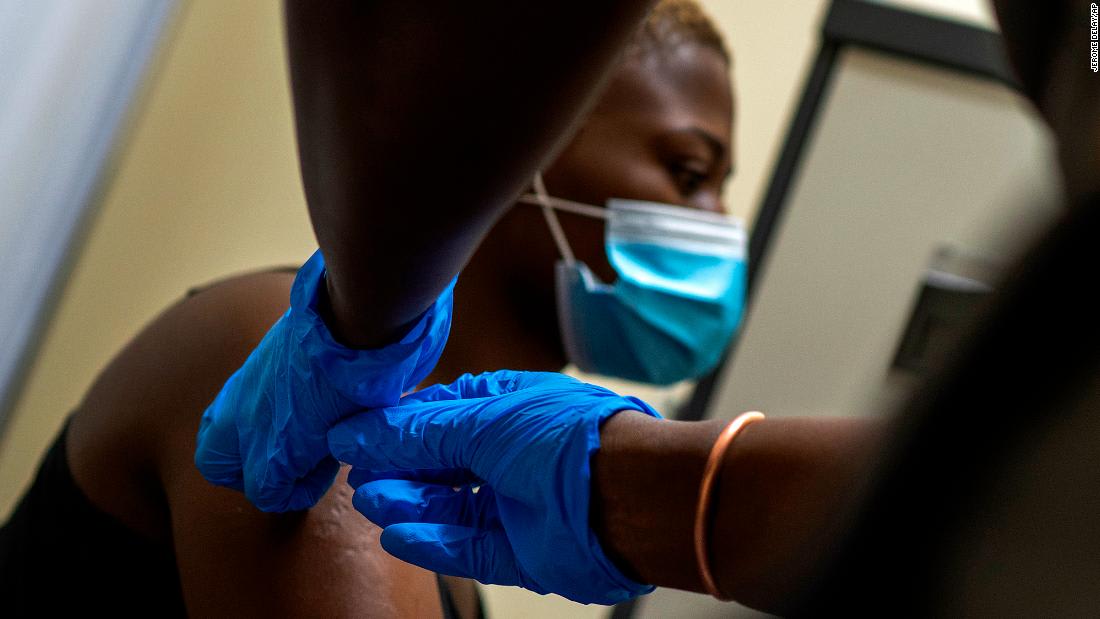 Covid-19 caused a significant jump in the US death rate in the second quarter of 2020, according to early estimates released Thursday by the National Center for Health Statistics (NCHS).

The report shows that mortality rose significantly in 2020, but it’s an incomplete snapshot of the pandemic since data for only the first two quarters of 2020 are currently available.

The first US case of the coronavirus was identified on January 21, 2020, and the World Health Organization declared the novel coronavirus a pandemic on March 11.

The CDC did not introduce the death certificate coding for Covid-19 until late March 2020. This explains why the Covid-19 death rate increased from 7 per 100,000 in the first quarter of 2020 to 109 in the second quarter, according to NCHS data.

By comparison, the age-adjusted death rate for heart disease -- the top killer in the United States -- for the second quarter of 2020 was 166 per 100,000. For cancer, the second leading cause of death in the country, that figure was 139.

Last week, statisticians for the US Centers for Disease Control and Prevention told CNN that Covid-19 was likely the third leading cause of death in the US in 2020.