Japan has signed a contract to buy enough of Pfizer’s coronavirus vaccine to cover over half of its population this year, according to public broadcaster NHK.

The agreement for 144 million doses would cover roughly 72 million of the country’s 125 million residents.

According to the broadcaster, 120 million doses of the vaccine are to be delivered by the end of June.

Health Minister Tamura Norihisa told reporters Wednesday that the government signed the contract on the premise that the vaccine will be approved in Japan, NHK said.

The next phase of the UK’s immunization program could see frontline workers prioritized, the deputy chair of the Joint Committee on Vaccination and Immunisation (JCVI) said on Wednesday.

The JCVI is in charge with overseeing the vaccine rollout with the initial plan being to inoculate people from nine priority groups including care home residents, people aged 50 and over and all individuals with underlying health conditions. How to proceed once these categories have been immunized has not yet been determined but officials and experts have suggested frontline workers could be next.

Anthony Harnden, JCVI deputy chair, told BBC Radio 5 Live on Wednesday morning that the group is exploring the idea. He said the next stage could also include individuals facing "exposure risk."

“For instance, teachers, policemen who may be exposed to members of the public, children who actually transmit the virus and those that are important to keep the economy running,” Harnden explained. “There are a lot of factors in phase two which we’ll be looking at in depth.”

His remarks echoed those of UK Home Secretary Priti Patel who spoke about the vaccine prioritization plan on several radio shows Wednesday morning.

Answering questions on LBC radio, Patel said frontline workers were being considered for priority access in the next phase of vaccine rollout.

Patel said: “There’s a lot of work that’s taking place…. We have the Joint Committee on Vaccines and Immunizations that are working with us on making sure we can push policing, fire and frontline [people] -- teachers, others -- when it comes to getting the vaccine.”

In response to queries on why frontline workers were not already a priority group, Patel said: “Primarily because we have a vaccine delivery plan ... to focus on those who are susceptible to dying from Covid which is the over 80s and they have been and they are the priority group, but within that plan of course the next wave will be the frontline workers we're speaking about."

“We’re working with the JCVI … They are the ones that are determining this, it’s not for politicians,” she added. 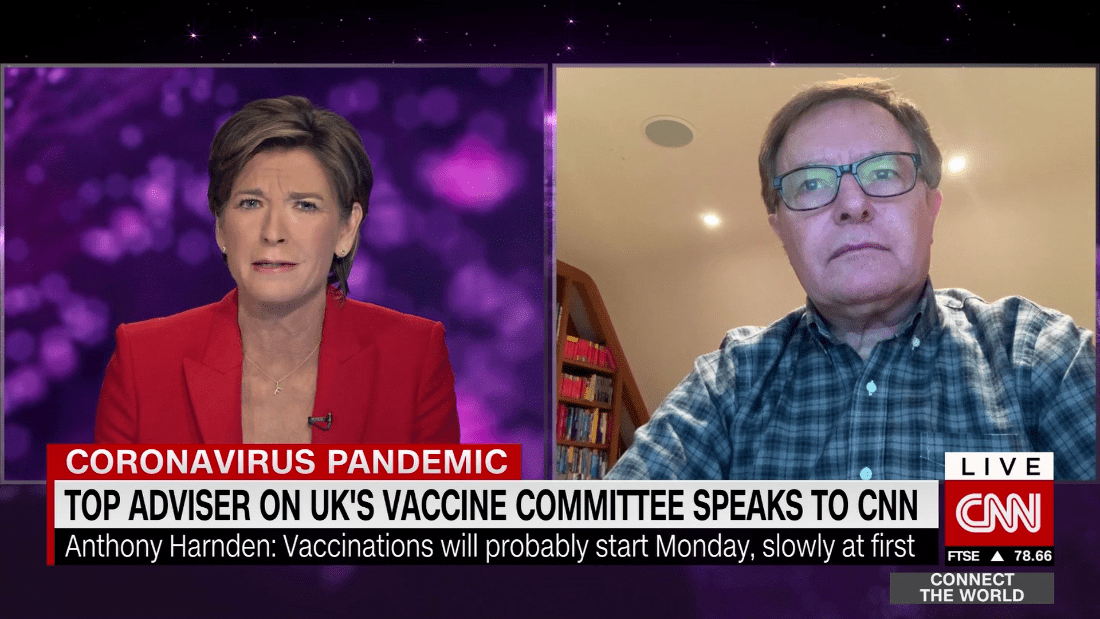 Harnden: Priority groups in the UK will get vaccine by Easter - CNN Video

Some UK hospitals look like a “war zone” due to the influx of Covid-19 patients, the country's Chief Scientific Advisor Patrick Vallance told British broadcaster Sky News on Wednesday.

“It is very difficult, it may not look like it when you go for a walk in the park, but when you go into a hospital this is very, very bad at the moment with enormous pressure and in some cases it looks like a war zone in terms of things that people are having to deal with,” Vallance said.

The UK is currently in the midst of a sharp surge in coronavirus cases and the country hit a record 1,610 deaths from Covid-19 on Tuesday - the highest daily increase since the start of the pandemic, according to data from Public Health England. The UK currently has the fifth highest death toll from Covid-19 in the world with 91,643 deaths, according to Johns Hopkins University.

Responding to a question on when lockdowns might be eased, Vallance commented that “the numbers are nowhere near where they need to be at the moment and need to come down quite a lot further”.

“Vaccines are not going to do the heavy lifting for us at the moment or anywhere near it,” he said, emphasizing the need to follow social distancing guidelines - “this is about the restrictive measures that we’re all living under and carrying on with those, we need to make sure we stick with it.”

Over 4 million people in the UK have already received the first dose of a Covid-19 vaccine, yet while this will give protection against “severe illness,” Vallance stressed that “much less” is known about the vaccine’s ability to stop transmission.

A third cabinet minister has tested positive for Covid-19 in Portugal within a week, according to the government.

Minister of the Economy Pedro Siza Vieira tested positive for the vírus Tuesday.

On Tuesday, Portugal marked the deadliest day since the start of the pandemic, as the Health Ministry recorded 218 Covid-19 related deaths and 10,455 new cases.

As of Tuesday, the death toll stood at 9,246, whilst the total number of coronavirus cases was 566,958, according to the Health Ministry.

Government officials continue to call on the population to stay at home and follow protocol, stressing the need to save lives and protect the national health system.

Medical staff across the country have taken to social media to express concerns over the rising numbers and the impact on their working conditions, with many working overtime and under-resourced.

Portugal has the second worst epidemiological situation in Europe, according to the most recent statistics from Our World in Data, an online scientific publication based at the University of Oxford.

Zimbabwe’s Foreign Affairs and International Trade Minister Sibusiso Moyo has died from Covid-19, according to a government statement.

Moyo succumbed to Covid-19 at a local hospital in the capital Harare early Wednesday.

“It is with a heavy heart that I announce Foreign Minister Dr SB Moyo has died.
“Zimbabwe has lost a devoted public servant and a true hero, and I have lost a friend. He fought his entire life so that Zimbabwe could be free. May he rest in peace,” he tweeted.

Moyo rose to fame after appearing on national television to announce the “mission” in the November 2017 coup that removed the late President Robert Mugabe—while insisting it was not a coup.

Germany is extending its current national lockdown until mid-February and introducing new, tougher measures as the country’s death toll continues to rise.

Chancellor Angela Merkel and her 16 state premiers agreed on Tuesday night to the extension of the lockdown, which began in December, following a marathon eight-hour discussion. Stricter mask requirements -- including the use of FFP2/N95 masks on public transport and in shops -- have been made mandatory across the country. The enhanced measures came after the German government was warned about the danger of the new variants of the virus.

One sticking point in the discussions was on the subject of schools. Officials ultimately decided that they will remain closed but in the end, it is up to the federal states to mandate this.

CNN affiliate n-tv spoke to German members of public about the changes to Covid-19 restrictions, with one woman telling the local television channel that she had hoped the current lockdown’s impact would be evident by now.

“The lockdown should have brought some effects already, but we are not seeing that,” she said.

Another man backed the government’s moves, saying: “They are elected officials, and will know what is best for the population.”

The changes come as the latest coronavirus figures were released by the Robert Koch Institute (RKI), Germany's national agency for disease control and prevention, on Wednesday morning.

An additional 1,148 fatalities were recorded, bringing the total number of those having died from the disease to 48,770 -- the second highest daily jump since January 14, when the death toll stood at an additional 1,244.

A funeral bell tolled at the Washington National Cathedral 400 times Tuesday, once for every thousand Americans who have died of the Covid-19 pandemic in the United States.

As the numbers climb, health experts and officials have turned their attention to mitigating the impacts of the new variant that has sparked alarm, and they are calling for ramped up vaccinations and preventative measures.

But some officials say they aren't seeing as many doses as the federal government reports distributing and many states say the demand for the vaccine is outpacing the supply.

The count of people in the US who have died from the virus rose rapidly over the course of the last year to reach Tuesday's grim 400,000 marker. And while the rate of new cases has dipped recently, experts warn that a variant of the virus could send cases surging once again.

"I worry desperately in the next six to 12 weeks we're going to see a situation with this pandemic unlike anything we've seen yet to date," said Michael Osterholm, a coronavirus adviser to President-elect Joe Biden and director of the Center for Infectious Disease Research and Policy at the University of Minnesota. "This will happen, we are going to see a major increase in cases, the challenge is how many," he told CNN on Tuesday.

When Biden's administration takes office, Osterholm said it will do everything it can to bolster distribution. But, he said, "we can't make the vaccine go much faster than it is right now," adding that officials will need to plan for dramatic action to keep the variant under control. 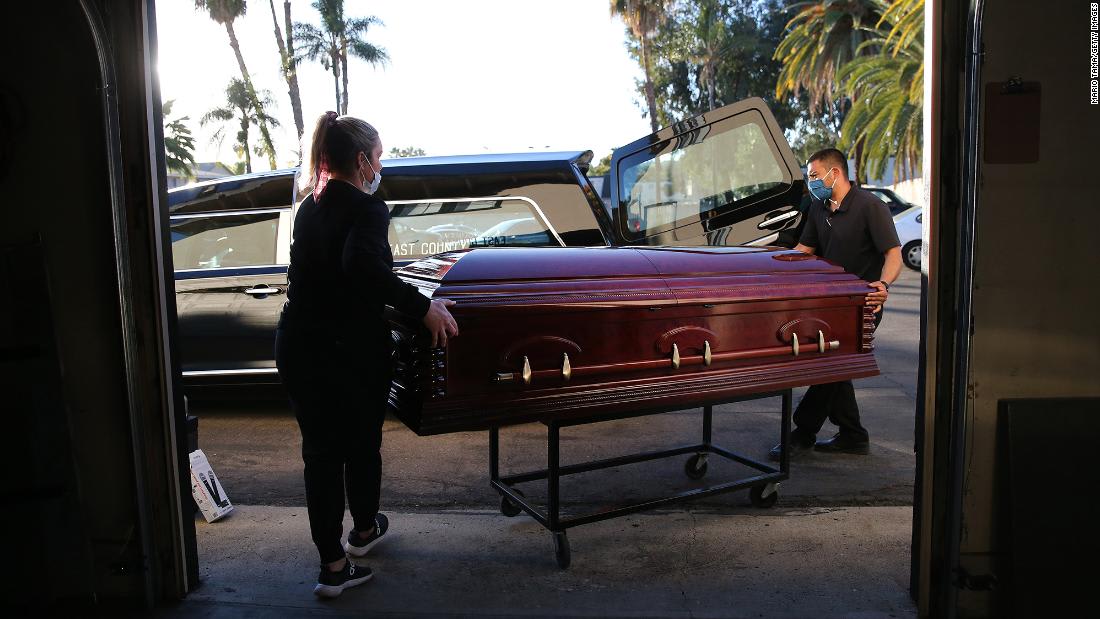 Officials call for more vaccine doses as the US death toll exceeds 400,000

UK Home Secretary Priti Patel said the high Covid-19 death toll in England and rate of hospital admissions mean that it is “far too early to speculate” about easing lockdown measures.

Speaking to Sky News on Wednesday, Patel said the UK is in a “pivotal stage” in the vaccination effort but that the country has a “long way to go.”

"When we still see hospitalization figures, now standing at over 38,000 people, with the number of people still dying with coronavirus, with the number of hospital admissions increasing, this is no time to speak about the relaxation of measures," she said.
"We cannot talk about easing restrictions and measures until we are absolutely clear that we have vaccinated priority groups."

The UK recorded 1,610 coronavirus deaths on Tuesday -- the highest daily increase since the start of the pandemic. Some 33,355 new cases were also reported Tuesday.

More than 15.7 million total coronavirus vaccine doses have been given out to nearly 13.6 million Americans, as of 6 a.m. ET Tuesday, according to the US Centers for Disease Control and Prevention.

This breaks down to roughly 8.9 million doses from Pfizer/BioNTech and 6.8 million from Moderna.

The CDC reports that more than 2 million people have received a second shot to complete their vaccination.