President Joe Biden tweeted from the @POTUS account for the first time following the inauguration ceremony, writing: "There is no time to waste when it comes to tackling the crises we face."

He continued: "That's why today, I am heading to the Oval Office to get right to work delivering bold action and immediate relief for American families."

The UK is “pausing” its plans to roll out rapid daily Covid-19 testing for the close contacts of positive individuals in English secondary schools and colleges, a government spokesperson said Wednesday.

The change was attributed to the emergence of the new UK variant.

The mass testing programme in schools was due to start in January to help identify asymptomatic cases amongst students and staff.

The government spokesperson said that the change of plans was the result of updated advice from UK scientific advisers, saying that NHS Test and Trace and Public Health England (PHE) believed "that in light of the higher prevalence and rates of transmission of the new variant, further evaluation work is required to make sure [testing] is achieving its aim of breaking chains of transmission and reducing cases of the virus in the community.
“We are therefore pausing daily contact testing in all but a small number of secondary schools and colleges, where it will continue alongside detailed evaluation," the spokesperson added.

Public Health England (PHE) also released a statement Wednesday explaining the rationale behind the advice and saying that the “pandemic has entered a new phase."

National lockdown measures across England have forced schools to remain closed since 5 January, however children of key workers are still allowed to attend. PHE confirmed that schools should continue to test staff and pupils currently going in to schools.

UK Education Secretary Gavin Williamson hailed daily testing in schools as a "milestone moment in our work to keep schools and colleges open for all" in December.

But scientists have expressed concerns that the tests may not be accurate enough, could falsely reassure people and increase the spread of Covid-19.

US President Joe Biden used his inaugural address to reflect on the challenge of containing the pandemic but struck a note of optimism about the future.

"We’ll press forward with speed and urgency for we have much to do in this winter of peril," Biden said Wednesday after being sworn in as president in Washington DC.
Biden referred to Covid-19 as a "once in a century virus that silently stalks the country."
"It’s taken as many lives in one year as America lost in all of World War II," he said.
"Millions of jobs have been lost. Hundreds of thousands of businesses closed."

The US has the highest toll of Covid-19 cases globally, with more than 24.2 million cases recorded. Biden takes office as the death toll crosses 400,000 and amid a stuttering vaccine rollout.

"This is our historic moment of crisis and challenge, and unity is the path forward. And we must meet this moment as the United States of America. If we do that, I guarantee you we will not fail," Biden said.

The 46th US president plans to make the coronavirus pandemic his top priority.

Biden will begin his presidency by asking Americans to wear masks for 100 days in his first executive order and reversing Donald Trump's decision to leave the World Health Organization (WHO.)

Spain has recorded 1,146 Covid-19 deaths in the past seven days, the highest weekly toll since the end of November.

The country has seen a sharp rises in infections over recent weeks.

Data released on Wednesday also showed that of the total infected in Spain since the beginning of the pandemic, more than 14% have been diagnosed in the last two weeks.

The data suggests that Spanish infections and deaths are still climbing, though not as sharply as in recent weeks.

Spain has recorded more than 2.2 million cases in total -- 346,223 within the past 14 days. The city and region of Madrid account for about one-third of the infections over the past 24 hours, which totaled 18,500 nationwide.

ICU admissions in the past seven days stood at 525, the highest weekly total so far this year.

Lebanon’s Ministry of Public Health has recorded 64 new deaths from Covid-19 in the last 24 hours. The new data marks the third day in a row in which Lebanon has set a record high for Covid-19 deaths in a 24 hour period.

The country has recorded a total of 2,084 Covid-19 related deaths since the pandemic began.

The country is currently under a stringent lockdown until January 25.

The surge in cases followed the holiday period during which Lebanon's government loosened restrictions and allowed shopping malls, restaurants, bars and nightclubs to open.

“Unfortunately, we are facing a frightening health situation," Hassan Diab, the prime minister in Lebanon's caretaker government, said on January 12.
"The coronavirus pandemic has spiraled out of control due to the stubbornness of people and their insurgence against lockdown measures which we have taken.”

Dr. Francis Collins, director of the US National Institutes of Health, has highlighted the need to understand more about lingering Covid-19 symptoms, and encouraged people to participate in a survey about the experience.

Over 400,000 Americans have lost their lives to Covid-19, Collins wrote in a blog post, “but thousands of others who’ve gotten sick and survived Covid-19 are finding that a full recovery can be surprisingly elusive.”

Collins noted results from a recent survey from the online Body Politic Covid-19 Support Group and its Patient-Led Research for the virus.

The survey included more than 3,700 self-described “long haulers” and found nearly half couldn’t work full time six months after prolonged symptoms developed. The pre-print survey has not been peer-reviewed or published in a medical journal.

“The findings show that, even in those people who don’t require hospitalization for severe Covid-19, the condition’s prolonged symptoms are having a major impact on lives and livelihoods, both here and around the world,” Collins wrote.
“While the number of people affected isn’t yet known, if even a small proportion of the vast numbers of people infected with Covid-19 develop Long Covid syndrome, it represents a significant public health concern.”

More insight is needed into these long-term symptoms, Collins said, urging people to participate in the online survey.

As new variants spread, the need to speed up the administration of vaccines is becoming all the more "acute," the EU Commission has said.

The EU Commission on Tuesday called on member states to accelerate vaccine roll-out and ramp up testing across the bloc, setting out targets for stepping up the fight against the virus:

According to the Commission, meeting these two targets "would reduce death and hospitalisation rates, relieve pressure on healthcare systems and then put Europe on track for herd immunity."

A successful deployment of vaccines will also help put Europe’s economy on a solid recovery path, it said.

New research published late Tuesday provides reassuring evidence that people vaccinated against coronavirus will be protected against emerging new variants of the virus.

Two teams tested two of the new variants against blood taken from people who had received the full two-course dose of either the Moderna or the Pfizer/BioNTech vaccine.

While the mutations in the new variants of the virus – one first seen in Britain, and another first identified in South Africa – did allow them to evade some of the immunity induced by vaccination, it was far from a complete escape, the two teams reported separately.

A team led by Dr. Michel Nussenzweig of the Rockefeller University tested plasma taken from 20 people who got two doses of either the Pfizer/BioNTech or Moderna vaccine as part of clinical trials. They found the vaccines produced strong antibody responses, as well as cells that keep producing new antibodies for months or years. “We measured their antibody responses to the wild type virus. Then we took their plasmas and measured them against the variants,” Nussenzweig told CNN.

Different mutations in the viruses did allow some escape from some types of antibodies, but the bodies of the volunteers threw an army of different types of antibodies at the viruses, the team reported in a pre-print -- not peer reviewed -- report published online. “When you start putting all these mixtures of antibodies together, what it means is that together they can take care of the variants,” Nussenzweig said. Even though they had a reduced effect, overall the response was so overwhelming that it should not matter, he said.

“What we really want to do with these vaccines is keep people out of the hospital. They are extremely likely to do that, irrespective,” Nussenzweig added.

Eventually, the vaccines should be updated – but the new mRNA vaccines made by Pfizer and Moderna can be changed very quickly. “Should the vaccines be tweaked?” he asked. “Probably – but that doesn’t mean that they won’t be effective.”

Separately, Ugur Sahin, who helped invent the BioNTech vaccine being made and distributed by Pfizer, tested his vaccine against the B.1.1.7 variant first seen in the UK. The team found “no biologically significant difference in neutralization activity,” they said in a pre-print report. But they said it would be “prudent” to start tweaking the vaccine, just in case.

Read more about what we know of the coronavirus variants here: 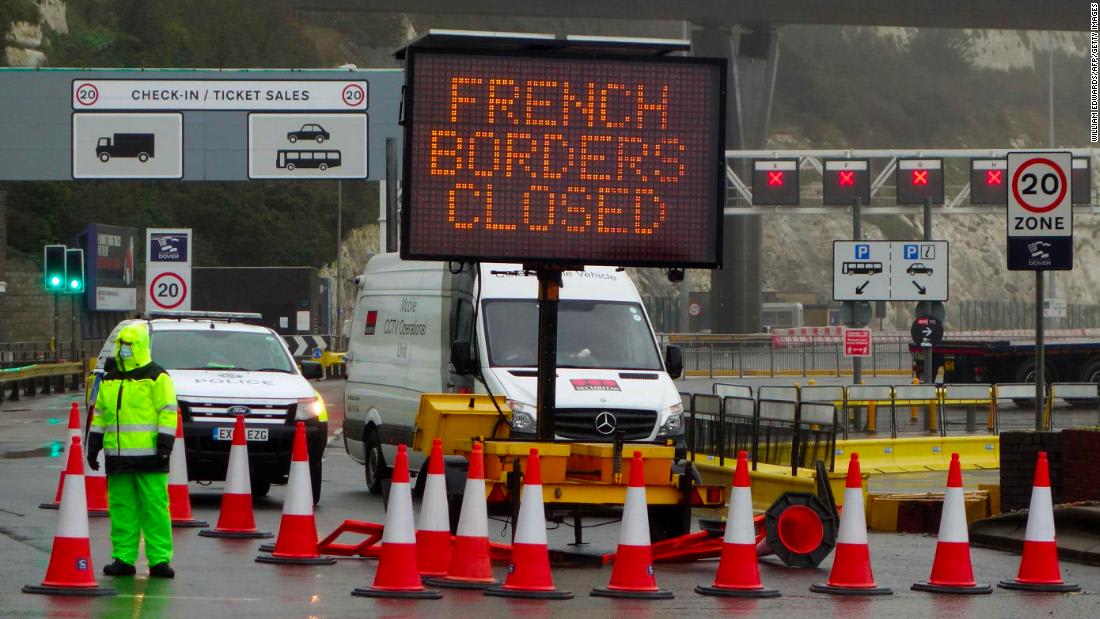 According to Johns Hopkins University's tally of cases in the United States, there have been at least 24,265,424 cases of coronavirus in the U.S. and at least 402,269 people have died in the U.S. from Covid-19.

At least 31,161,075 vaccine doses have been distributed and at least 15,707,588 total doses of the vaccine have been administered, according to the US Centers for Disease Control and Prevention.