The Hungarian pharmaceutical authority has approved both the Oxford/AstraZeneca and Russia’s Sputnik V Covid-19 vaccines, a spokesperson for the Hungarian government told CNN on Thursday.

Hungary becomes the first European Union country to approve both vaccines, but as far as the Oxford/AstraZeneca vaccine goes, it says it has to wait for a decision by the European Medicines Agency before it can distribute the shot.

Speaking about Sputnik, the spokesperson said talks with Moscow to buy the vaccine were “ongoing.”

“We hope that vaccines will be available in Hungary from as many places and in as large quantities as possible,” the spokesperson added.

In a statement, Russia’s sovereign wealth fund (RDIF) said the National Institute of Pharmacy and Nutrition of Hungary approved the vaccine under the emergency use authorization procedure.

“The approval is based on the results of the clinical trials of Sputnik V in Russia and a comprehensive assessment of the vaccine by experts in Hungary,” the RDIF statement said.

Kirill Dmitriev, CEO of the RDIF, said that Hungary is "the first EU country to realize all the advantages of Sputnik V vaccine and authorize its use. This decision is very important as it demonstrates that the vaccine's safety and efficacy of over 90% are highly regarded by our partners in Hungary.”

Russia's announcement of Sputnik V as the "world's first" approved Covid-19 shot was met with international skepticism last year, after the country registered the vaccine in August ahead of key large-scale Phase 3 trials necessary to establish its efficacy and safety. While those trials are currently ongoing, the country is already moving towards mass vaccination.

On November 24, Russia announced that its interim data suggested the shot is at least 91.4% effective and could be more than 95% effective.

Mthembu was one of the government’s key leaders in its response to the global pandemic and its public face during many news briefings.

It is with deep sorrow and shock that we announce that Minister in the Presidency Jackson Mthembu passed away earlier today from COVID-related complications. Our thoughts and prayers are with his family at this time of loss," President Ramaphosa tweeted.

"Minister Mthembu was an exemplary leader, an activist and life-long champion of freedom and democracy. He was a much-loved and greatly respected colleague and comrade, whose passing leaves our nation at a loss," Ramaphosa added.

Mthembu tweeted that he had contracted Covid-19 on January 11.

"Today I visited the Military hospital in Tshwane to get medical attention for an abdominal pain," he said at the time. "After undergoing some tests, I tested positive for Covid-19... I want to thank the many South Africans who have wished me a speedy recovery. As a people we must overcome Covid-19," Mthembu added.

Lebanon has extended its strict general lockdown, which includes a 24-hour curfew, until Monday February 8, according to a statement tweeted by the Prime Minister's office on Thursday.

The curfew -- which started on January 14 and which was meant to end on January 25 -- was imposed because of an unprecedented surge in Covid-19 cases in the country.

The spike comes after the holiday season, when the government loosened restrictions and allowed shopping malls, restaurants, bars and nightclubs to open.

On Wednesday, Lebanon’s Ministry of Public Health reported 64 Covid-19 related deaths, the third daily death record in a row. The total number of deaths in Lebanon since the pandemic began is 2,084.

On Friday, Lebanon reported 6,154 new cases, the highest daily total so far. The total number of cases in the country is 264,647.

The current lockdown measures, the strictest in the country so far, include a reduction of the number of travelers coming to Lebanon and quarantine measures for all arrivals.

The organizers of Glastonbury have announced that Britain's famous music festival will be canceled for a second consecutive year amid the coronavirus pandemic -- an ominous move for live music promoters and artists ahead of an uncertain summer.

"In spite of our efforts to move Heaven & Earth, it has become clear that we simply will not be able to make the Festival happen this year," organizers Michael and Emily Eavis said in a joint statement on Thursday. "We are so sorry to let you all down."

Paul McCartney was set to headline one of the three premier slots at the iconic weekend-long festival in June 2020. The former Beatle told the BBC last month that he did not expect the event to go ahead this year.

Organizers said on Thursday that tickets already purchased will roll over to 2022 -- when Glastonbury intends to hold just its second event in five years, following a year off in 2018 and two consecutive canceled events. 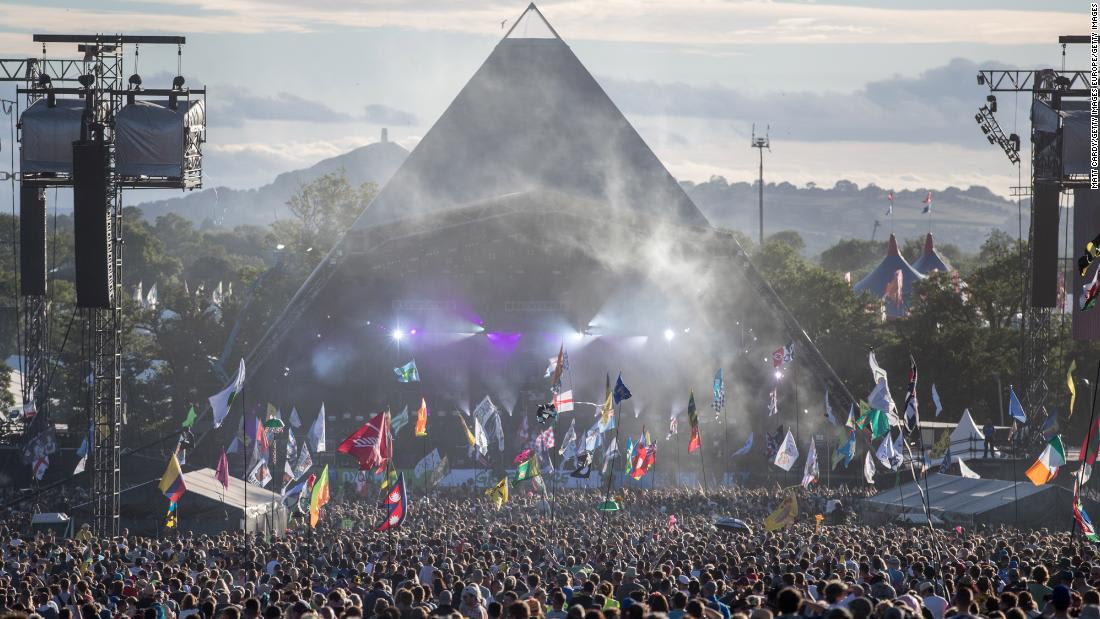 The Biden White House is pledging to communicate more -- and more honestly -- about the coronavirus pandemic with the aim of restoring the trust of the American people. The first step will be a return to regular briefings.

CDC briefings have been notably absent since last March. In other disease emergencies, the CDC has provided regular briefings, often several a week, with top experts. The Trump White House stopped them after the CDC’s top respiratory specialist Dr. Nancy Messonnier warned of worsening spread and disruptions, angering then-president Trump. Her predictions came true, but CDC officials have held only a handful of briefings since then

The White House Coronavirus Task Force briefed regularly for a few months, but those briefings petered out by June and came only sporadically after that.

The federal government should be the source of truth for the public to get clear accessible, and scientifically accurate information about COVID-19. We will be honest, transparent and straightforward with the American people to rebuild that trust," White House coronavirus coordinator Jeff Zients told reporters Wednesday.

To that end, Zients said the new administration would be taking a number of steps to provide clarity and insight into the pandemic, including regular expert-led science-based public briefings by HHS, CDC and the Covid-19 White House response team.

On Thursday, President Biden will also issue an executive order to enhance the collection, sharing and analysis of data. As part of that, the CDC will maintain a public dashboard tracking real-time data on Covid-19 cases, testing, vaccinations and hospital admissions at a national and state-level.

There have been misunderstandings about much of the data generated about the pandemic. For instance, CNN relies more heavily on data from Johns Hopkins University about diagnoses and deaths than it does on the CDC.

“The mutation of the virus is a threat,” Merkel told journalists in Berlin, referring to the new strain first detected in England.

The mutation is much more infectious than we knew last year and this makes it more difficult to control the pandemic,” the chancellor said.
“I urge people to take this seriously. Otherwise it is difficult to prevent a third wave,” she concluded, adding that the variant would be the dominant topic at Thursday’s video call with European Union leaders.

Merkel went on to justify her decision to enforce stricter measures against the spread of Covid-19 earlier this week, explaining that while daily infections and hospital admissions are declining, the number of daily fatalities is still “shockingly high.”

“We see a fractured image,” she said, adding that there are “encouraging signs that the situation is easing.”

“[The] difficult sacrifices that people have made in the lockdown are starting to pay off,” Merkel added.

Earlier in the week Germany extended a nationwide lockdown until February 14, implementing stricter rules, including making FFP2 masks mandatory in public spaces and forcing German companies to allow employees to work from home until mid-March, where possible.

The country reported 20,398 new infections and 1,013 new deaths related to Covid-19 on Thursday, according to the Robert Koch Institute.

According to Granma, the island is currently in the second phase of testing its Sovereign-02 vaccine on 900 people between the ages of 19 and 90.

Vicente Vérez Bencomo, the director general of Cuba’s Finlay Institute for Vaccines said Cuban officials hope to vaccinate the 11 million inhabitants of Cuba this year and will then sell the vaccine to other countries.

So far he said Vietnam, Iran, Venezuela, Pakistan and India have expressed interest in buying the vaccine when it is available for use.

President Joe Biden’s first full day in office Thursday will focus on Covid-19, rolling out his national strategy for the pandemic amid the Trump administration response he inherited, with record high cases, hospitalizations, and deaths.

There is a lot of work to do, officials said, and it’s actually “so much worse” than they thought.

“For almost a year now, Americans could not look to the federal government for any strategy, let alone a comprehensive approach to respond to Covid. And we've seen the tragic costs of that failure. As President Biden steps into office today that, that'll change tomorrow,” White House Covid coordinator Jeff Zients said Wednesday.

The Biden strategy, he said, will be “a fundamentally different approach from the Trump administration,” and will be “driven by science, data, and public health,” not politics.

Here’s a preview of the actions we can expect:

“In terms of specific projections from the manufacturers, you know, we know that there is sufficient supply to do the 100 million shots in the 100 days,” Zients told reporters in a briefing ahead of the release of the new “National Strategy for the COVID-19 Response and Pandemic Preparedness.”

Zients also pledged to clear up confusion about how many vaccines each state will get and when.

You know, in terms of allocations, our system will have equity as the cornerstone of how we do allocation,” Zients said.

“We will work to provide projections on supply. We hear over and over from governors and local leaders that they just don't know what supply is coming and can't plan. We will absolutely across the next few days to get our arms around what's going on, make sure that we are communicating with states and localities, so they can prepare, effectively,” Zients added.

“We clearly need strong coordination to ensure supply availability and information sharing, and that's what we will do,” he said.

US President Joe Biden has pledged to provide 100 million doses of Covid-19 vaccine in his first 100 days of office.

"You still optimistic that we can get 100 million doses in 100 days?" NBC's Craig Melvin asked Fauci during an interview on the Today Show. "I really do think so," Fauci responded.