Police in the United Kingdom broke up a rave that saw more than 300 people packed under a railway arch in the early hours of Sunday morning.

The Metropolitan Police said "numerous attempts were made to engage with organisers and others but they were uncooperative." The doors to the building were padlocked from the inside to stop police getting in, they added.

The UK has been under a strict lockdown since earlier this month, with indoor gatherings banned.

Officers stopped 78 people and issued £200 fines at the event.

"Officers were forced, yet again, to put their own health at risk to deal with a large group of incredibly selfish people who were tightly packed together in a confined space - providing an ideal opportunity for this deadly virus to spread," Chief Superintendent Roy Smith said in a statement. "Our frontline officers continue to police this public health crisis with compassion & professionalism but it is completely unacceptable they have to face such needless risks to their own health and to their families too."

The new numbers were announced by Iran’s Health Ministry spokeswoman Sima Sadaat Lari in a news conference on state TV.

The health ministry said 4,090 patients are currently hospitalized in ICU.

Iran is the Middle East country hardest hit by the pandemic in terms of both total cases and deaths, though both have fallen from record highs at the end of 2020. The country is keeping restrictions in place to bring the case tally under control.

According to Johns Hopkins University's tally of cases in the United States, there have been at least 24,991,748 cases of coronavirus in the U.S.; at least 417,399 people have died in the U.S. from coronavirus.

At least 41,411,550 vaccine doses have been distributed and at least 20,537,990 doses of the vaccine have been administered, according to the US Centers for Disease Control and Prevention.

Speaking on Sky News, Hancock said: “There is early evidence that the lockdown is starting to bring cases down. But we're a long, long, long way from that from being low enough because the case rate was incredibly high and you can see the pressure on the NHS. You can see it every day.”

Pressed to comment on whether the United Kingdom would need a blanket ban on people traveling to the country amid fears of new variants, Hancock said: “We’ve got to have a precautionary principle. We’ve introduced pre-departure testing and we’ve also introduced checks on everybody to check that that’s happened and that the passenger locator form is completed.

"But it is absolutely vital that we protect this country from a new variant that may not be as well dealt with by the vaccine. We cannot risk the progress that we have made.”

“Even after you have had both doses of the vaccine you may still give Covid-19 to someone else and the chains of transmission will then continue,” Jonathan Van-Tam wrote in the Sunday Telegraph. “If you change your behaviour you could still be spreading the virus, keeping the number of cases high and putting others at risk who also need their vaccine but are further down the queue.”

Health Secretary Hancock praised the country’s vaccine rollout, saying that more than three-quarters of over-80s have been vaccinated, and a similar number in care homes.

“We have vaccinated more people in just the last three days than France for instance has in the entire history of this disease,” he added.

"The good news is that there are early signs that certainly the rise in the number of cases has been halted and in many parts of the country cases are starting to come down," he added later on while speaking to the BBC.

The United Kingdom has had at least 97,329 deaths related to Covid-19, according to data from Johns Hopkins University, giving it one of the highest per capita death rates in the world.

The University of Michigan will pause all sports programs after a more transmissible variant of the Covid-19 virus was detected in several individuals linked to the Michigan Athletic Department.

"Canceling competitions is never something we want to do, but with so many unknowns about this variant of Covid-19, we must do everything we can to minimize the spread among student-athletes, coaches, staff, and to the student-athletes at other schools," said Michigan Director of Athletics Warde Manuel.

The Michigan Department of Health and Human Services mandated on Saturday that the university halt all athletic activities in order to stop the new variant of Covid-19 from spreading within the community. All Michigan sports programs will pause games, team and individual training sessions until further notice.

Student-athletes, coaches and team staff are being required to quarantine "effective Jan. 23 until further notice and up to 14 days (Feb. 7)," the school said.

If confirmed, it would be the first instance of community transmission seen in the country sine November 18.

Chris Hipkins, the New Zealand minister for the country's Covid-19 response, said Sunday the case was a 56-year-old woman who has recently been through isolation in Auckland after returning from Europe.

“The person had traveled in Spain and the Netherlands late last year. While in the Netherlands, she was with family members, all of whom were well at the time, but subsequently one or two of those family members have tested positive for Covid-19,” said Director General of Health Dr. Ashley Bloomfield.

Bloomfield said she tested negative twice and did not have symptoms while in managed isolation. She returned home on January 13. She started to feel very mild symptoms on January 15 and these got progressively worse before she was tested.

Bloomfield added that after being released from managed isolation, she traveled around the southern part of the Northland region with her husband and has been in roughly 30 locations in the five days or so. He said a thorough interview has suggested just four close contacts and those people have all been spoken to, isolated and tested.

Fewer than 2,300 cases have been confirmed in the country, and only 25 people have died.

"Modest delays” between first and second doses of Covid-19 vaccine are not expected to decrease protection against the virus, the US Food and Drug Administration told CNN Saturday.

Previously, the agency had warned that changes to vaccine schedules without appropriate data could put public health at risk.

In its statement on Saturday, the FDA said it “recognizes that getting as many people as possible across the country fully immunized will help to curtail the spread of the virus that causes Covid-19 and should be a priority."

“Modest delays in the administration of the second dose, if absolutely necessary, would not be expected to decrease the protection conferred by the second dose and are preferable to not completing the 2-dose series.”

Earlier this month, when concerns about the availability of vaccines prompted suggestions to extend the length of time between doses, FDA officials doubled down on initial recommendations.

“At this time, suggesting changes to the FDA-authorized dosing or schedules of these vaccines is premature and not rooted solidly in the available evidence,” FDA officials wrote on January 4. “Without appropriate data supporting such changes in vaccine administration, we run a significant risk of placing public health at risk, undermining the historic vaccination efforts to protect the population from Covid-19.”

Clinical trials showed both vaccines are about 95% effective, when used according to recommended dosages and dosing intervals. The FDA noted that it has not evaluated data regarding the protection provided by the vaccines if there are longer delays in administering the second dose.

Dr. Anthony Fauci, director of the National Institute of Allergy and Infectious Diseases, told CNN on Friday that he didn’t think it would make a big difference if a person’s second dose took place two or three weeks after the recommended time.

“I don’t see a big problem with that if the situation on the ground means the stress is such you can’t precisely do 28 days or 21 days,” Fauci said.

Two residents of Washington state have tested positive for the Covid-19 variant first detected in the United Kingdom, the Washington State Department of Health said.

As of Friday, at least 195 cases of the variant been identified in 22 US states, according to data posted by the US Centers for Disease Control and Prevention. The variant has also been found in at least 60 countries worldwide, according to the World Health Organization.

While outlining his plan to halt the spread of the coronavirus last week, President Joe Biden tempered his ever-present optimism with a dose of realism about the potent staying power of this deadly pandemic and the fact that the nation's vaccine distribution system is a long way from becoming an efficient machine.

"Things are going to continue to get worse before they get better," the new President said, noting that the US is likely to cross a half-million deaths next month as cases continue to mount. "We didn't get into this mess overnight, and it's going to take months for us to turn things around."

For many Americans who feel trapped in a never-ending season of grief, isolation and disappointment, the start of a new year, a new administration and a new Congress seemed to offer hope -- however naïve it was -- that there would be some flip of a switch that could speed up the nation's lurching process for getting shots into arms.

But even as Biden announced a series of executive actions last week intended to curb the pandemic, the reality is sinking in that Americans may be stuck in this maddening purgatory for a while longer -- with their state governments finally in possession of vaccines that can protect them, but most people still finding them out of reach. 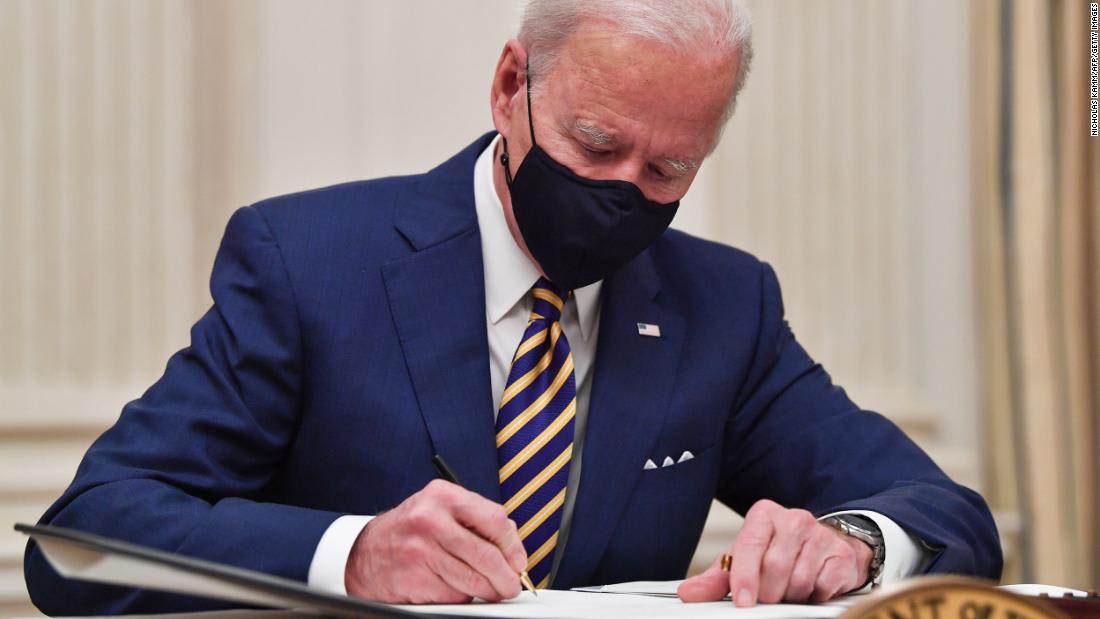