Dr. Anthony Fauci, director of the National Institute of Allergy and Infectious Diseases, reflected on why the US was hit so badly by the coronavirus: mixed messaging, divisiveness and the federalist approach.

“We had a situation where instead of concentrating from the top on the science and realizing that we must make decisions based on data and based on evidence, there was a considerable amount of mixed messaging about what needed to be done from the top down,” Fauci said. “And that really cost us dearly.”

Fauci, who was speaking at a panel during the Davos World Economic Forum on Monday, added, there was “a profound degree of” divisiveness in the country and public health issues — such as mask-wearing – became political statements. “You cannot imagine how destructive that is to any unified public health message.”

Finally, Fauci spoke about the federalist approach in the US: 50 states and territories which are given a degree of flexibility to do things their own way.

While he said that under different circumstances this works well, in the pandemic, when the government didn’t want to tell the states what to do, there was a situation where he said that the states were “sort of left on their own,” meaning “we had a disparate, inconsistent response from one state to the other, which is antithetical to the fact that the virus is the same, it doesn’t know the difference between New York and Pennsylvania, between Louisiana and Mississippi, it’s all the same.”

“We needed to have a good cooperation between the federal government and the individual locals, which we did not have,” he said.

Two doses of the vaccine “is expected to be protective against emerging strains detected to date,” according to the release.

The company’s study showed that the variant first found in the UK had “no significant impact” on the vaccine’s effectiveness.

The results for the variant first spotted in South Africa, however, were not as optimistic — and some early studies have suggested vaccines may be somewhat less effective against this strain.

In the press release, Moderna noted that “a six-fold reduction in neutralizing titers was observed with (the variant discovered in South Africa) relative to prior variants.”

“Despite this reduction, neutralizing titer levels with (the variant discovered in South Africa) remain above levels that are expected to be protective,” according to the press release.

David Montefiori, a virologist at Duke University Medical Center, said while he’s “cautiously optimistic” Moderna’s vaccine will work well against this strain, he’s still not sure.

“The efficacy might be reduced somewhat, but it may still be very effective,” he said. “Hopefully the vaccine will still be 70-80% effective.”

The variant first identified in the UK has also appeared in more than 45 other countries, including 195 cases in the US.

The variant first identified in South Africa has appeared in more than 20 other countries. No cases have been identified in the US, but experts say it’s likely there are cases and US surveillance, which has been widely criticized, has not yet found them.

Dr. Anthony Fauci, director of the National Institute of Allergy and Infectious Diseases and President Biden’s chief medical adviser, said on Good Morning America on Monday that it was a “prudent decision” for the new administration to reinstate travel restrictions.

He said that he thinks the travel ban will be important “in addition to having a situation where anybody coming into the country now is going to be required to have a negative test before they even get on the plane, when they land to have a degree of quarantine, as well as another test.”

“I believe it was prudent, even though it’s never perfect, there’s always a possibility, and even a likelihood of some slippage, but I think the ban, which was discussed very intensively by the group, was the right decision,” Fauci said.

Some context: On Sunday, CNN reported that Biden would reinstate Covid travel restrictions on non-US citizens who have been in Brazil, Ireland, the United Kingdom and much of Europe. The restrictions were also extended to travelers who have recently been in South Africa. The reinstating of the travel restrictions came one week after President Donald Trump signed an executive order that would have lifted them on Jan. 26.

British Prime Minister Boris Johnson said the idea of quarantining people arriving into the country in hotels for 10 days as a Covid-19 measure is “definitely” being “looked at.”

We want to make sure that we protect our population, protect this country against reinfection from abroad. That idea of looking at hotels is certainly one thing we're actively now working on,” Johnson said at a vaccination center in North London on Monday.

The Prime Minister suggested that more must be done to protect people with the threat of new variants spreading from other countries saying we have "got to be able to keep that under control."

As coronavirus infections and death rates soar across the country, schools in England have been closed to most pupils since a third national lockdown began on January 5, as well as large sections of 2020. Now pressure is building on the British government to reopen them.

He said parents and teachers will be told of any decisions “as soon as we can” but the government is not yet able to give a timeframe for when pupils will return to classrooms.

We're going to be looking at where we've got to on the 15th of February… we hope to have vaccinated about 15 million people across the whole of the UK... the real priority groups. We will be deciding before then, whether we can be getting schools back,” Johnson said.

Europe continues to battle further waves of the coronavirus pandemic. Here are some of the key lines from the continent today:

A rural county in Washington state is lapping the field when it comes to distribution of the coronavirus vaccine.

Kittitas County says its experience in triaging and managing disasters, especially wildfires, is the secret to why it is outpacing the vaccine rates in the state.

"Our county has a 25-year history of just sort of everybody -- the hospital, the school districts, law enforcement, fire agencies, federal state partners -- we just cooperate."

When the pandemic started and there was a need for personal protective equipment and testing, groups working with the emergency management center banded together to respond.

Now the cross-functional team of essential workers and volunteers are working to distribute the vaccine and it's working, says Elliott, who is in charge of vaccine distribution for the county. In fact, he says a single dose hasn't been wasted. 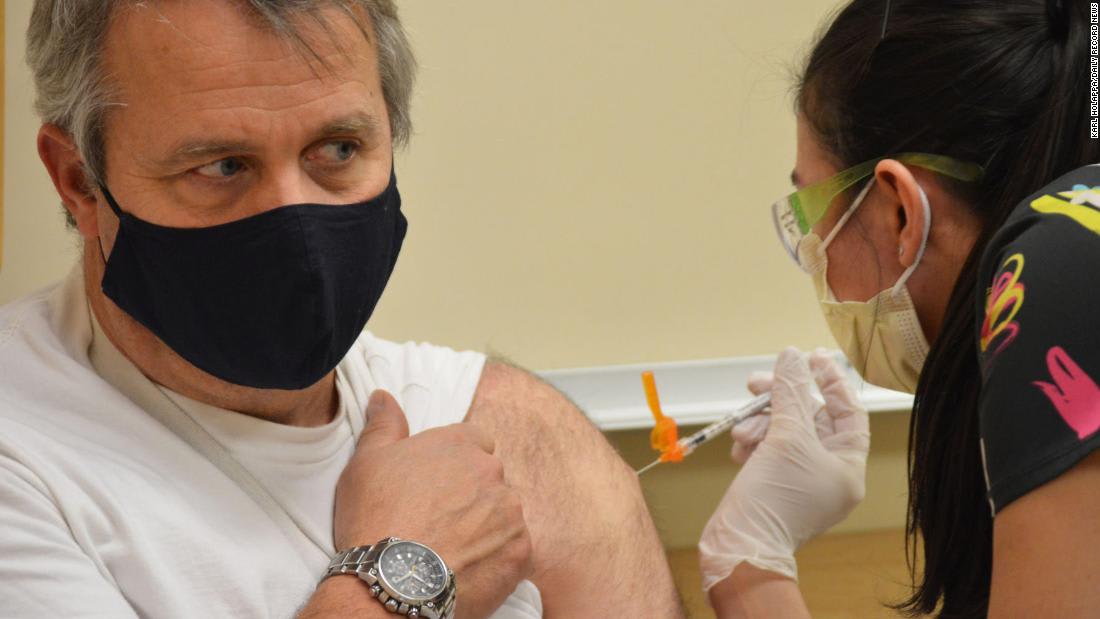 Dr. Anthony Fauci, director of the National Institute of Allergy and Infectious Disease and President Biden’s chief medical adviser, said on NBC's "Today" show on Monday that he didn’t think that the vaccine was responsible for the plateau of Covid-19 cases yet.

“What I think this really is is just the natural peaking and then plateauing and coming down,” he told NBC’s Savannah Guthrie. “The number of vaccines that we’ve gotten into the arms of people, you know, good start, we want to keep going, get a lot of people vaccinated, but I don’t think the dynamics of what we’re seeing now with the plateauing is significantly influenced yet  — it will be soon — but yet by the vaccine. I just think it’s the natural course of plateauing.”

However, he said that people can’t get complacent, because the coronavirus variant first identified in the United Kingdom is now circulating in the US and it transmits more easily from person to person.

“The good news is what you just said, that we seem to be plateauing,” Fauci said. “The sobering news is that we cannot bring our guard up and lose the intensity of being able to use the public health measures to prevent the further spread, because if in fact the variant becomes dominant, if the variant that has greater degree of transmissibility becomes dominant, we’re going to be faced with another challenge of a virus that has a more efficient capability of spreading.”

Hong Kong has greenlit the Fosun-BioNTech coronavirus vaccine -- the first shot to be approved in the city -- according to a government statement released on Monday.

The statement said the initial batch of 1 million doses is expected to arrive in Hong Kong in late February, where on arrival the government would begin the rollout “as soon as possible.”

The use of German pharmaceutical company BioNTech's new vaccine as a prevention of Covid-19 has more benefits than risks," Hong Kong's Secretary for Food and Health Sophia Chan said in the statement.

Some background: The approval of the Fosun-BioNTech shot comes after an advisory panel unanimously voted in favor of the vaccine for emergency use last week, where the 12-member panel were in agreement the vaccine met the safety and quality requirements in Hong Kong for emergency use.

The vaccine’s approval makes it the first in the financial hub and comes at a time where the government is expected to implement new quarantine measures for cabin crew next month, as the region battles to contain another wave of coronavirus.

Hong Kong’s airline Cathay Pacific said in a statement they would expect their passenger rates to reduce by nearly 60% and cargo capacity by 25% if the government does go ahead with plans.

Under the proposed plans by the government, pilots and cabin crew would be expected to face a mandatory 14-day hotel quarantine when they return from an overseas trip.

“We’ve administered nearly two million shots to one of our most vulnerable populations through onsite and, in many cases, room-to-room visits,” Karen Lynch, executive vice president of CVS Health, said in a press release.

Walgreens and CVS have come under fire for a slow rollout, with some nursing homes saying it has taken too long to get the shots. The company says that doses administered out of doses allocated is not an accurate way to its track progress; dose allocations were based on long-term care facility bed counts and multiplied by two to account for staff, “but at most facilities occupancy is far less than bed count and staff uptake remains low.”

Walgreens said last week it expected to complete administering nearly all of its first Covid-19 vaccine doses to nursing home residents and staff on Monday.

In its news release on Monday, CVS said that a Covid-19 vaccine will eventually be available to the public at its pharmacies based on vaccine availability and prioritization recommendations, and it has the capacity to administer 20 to 25 million shots per month. Currently, CVS pharmacies in Indiana, Massachusetts and New York are offering vaccines to specific age groups.