Five people were arrested Tuesday after an "unauthorized" Australia Day protest in Sydney that breached health restrictions put in place to avoid the spread of Covid-19, New South Wales police said in a statement.

Police said they worked with organizers to separate the crowd Tuesday into groups of fewer than 500 people in an effort to minimize health risks.

"No issues arose at the protest and the crowd began to disperse just after 11am, before a large group attempted to commence a march in Hyde Park about 11.45am," the NSW police statement said.
"Police spoke with the organiser and the crowd, giving them a formal warning regarding a breach of public health regulations before the crowd eventually dispersed."

Four of those arrested were involved in a scuffle in which a police officer was allegedly assaulted, according to police. A 27-year-old woman and a 28-year-old man would be charged with failure to follow Covid-19 directions from police, among other charges, police said. Two other men were each issued with a 1,000 Australian dollar ($770) penalty and released.

One man who was not part of the gathering was charged with breach of the peace, the police statement added.

In Melbourne, two men were also detained during Australia Day protests for breaching the peace but were released without charge a short time later. "Police were pleased with the behaviour of those that attended," Melbourne police told CNN.

Some 937 cases were local transmissions and 22 imported.

The CCSA said 848 of the local transmissions are from a mass testing drive in Samut Sakhon province -- the origin of Thailand’s most recent wave, and the hardest hit province with a total of 6,394 cases.

The majority of the infected individuals from the mass testing are migrant workers from the neighboring nation of Myanmar, who live in dormitories and shophouses.

Most of the newly infected are young workers and asymptomatic, CCSA spokesman Dr. Taweesilp Visanuyotin said during a news conference Tuesday.

Japan confirmed 2,765 new coronavirus infections on Monday, falling below 3,000 new daily cases for the first time since December 28, according to the country’s Health Ministry.

The country’s total number of cases now stands at 368,855, with the death toll rising by 74 Monday to 5,171. The number of patients in a serious condition across the country rose to 1,017, up 10 from the previous day.

Tokyo reported 618 new Covid-19 cases from Monday, bringing the total number of infections in the capital to 94,508. There are 2,808 patients under medical care in hospital with 148 in serious condition in Tokyo.

State of emergency: Japanese minister in charge of coronavirus response Yasutoshi Nishimura said at a parliamentary session on Tuesday that one criterion for lifting the state of emergency is for the number of new cases in Tokyo to fall below 500. However, the decision to lift it will require a more comprehensive assessment, including the availability of hospital beds.

Vaccine numbers: At least 41,418,325 vaccine doses have been distributed and at least 22,734,243 shots administered, according to the US Centers for Disease Control and Prevention.

Mexican Foreign Minister Marcelo Ebrard announced on Twitter Monday that his PCR test came back negative, one day after the country's President tested positive for the novel coronavirus.

Ebrard's statement said he'll be tested again on Wednesday "as recommended", and will continue to work from home in the meantime. "Tomorrow I will participate in the UN Security Council to present Mexico's position on the Middle East," his statement said.

President Andrés Manuel López Obrador tested positive for Covid-19 on Sunday. On Friday, the two were seen sitting together unmasked with two other colleagues during a phone call with US President Joe Biden.

Lopez Obrador, who is rarely seen wearing a mask, has been working from the Presidential Palace as he recovers.

Mexico’s total number of confirmed Covid-19 cases stands at 1,771,740, with more than 150,000 deaths from the virus, according to the country’s Health Ministry.

Wen told CNN’s Anderson Cooper that public health officials are extremely concerned about the variants emerging across the US.

“We've seen what happens in other countries that have actually had coronavirus under relatively good control, then these variants took over and they had explosive spread of the virus, and then overwhelmed hospitals,” she said.

Though public health measures, like masking and social distancing, will still help prevent the spread of the virus, low-risk activities might be more dangerous under these new conditions, said Wen.

“Now we think that maybe it's safe to open K-8 schools,” she said. “Well, what happens if we have an even more transmissible variant that could make those activities a lot more dangerous?”

“If we thought that going to the grocery store before was relatively safe, there's actually a higher likelihood of contracting coronavirus through those everyday activities,” she added.

"I just said, 'Oh my goodness gracious.' I could just see what's going to happen," Fauci told CNN's Erin Burnett on "Out Front" of Trump's suggestion.

"You're going to have people who hear that from the President and they're going to start doing dangerous and foolish things, which is the reason why, immediately, those of us who were not there said, 'This is something you should not do.' Be very explicit. The (US Centers for Disease Control and Prevention) came out, I think, the next day and put in one of their publications, 'Do not do this.'"

At an April White House news conference, Trump had mused about whether disinfectants could be used to treat the virus in humans -- asking whether there is "a way we can do something like that, by injection inside or almost a cleaning."

He later falsely claimed he was being sarcastic and that he was prompting officials to look into the effect of disinfectant on hands -- not through ingestion or injection. But the comments prompted cleaning product companies and state health officials to issue warnings about the dangers of their ingestion. 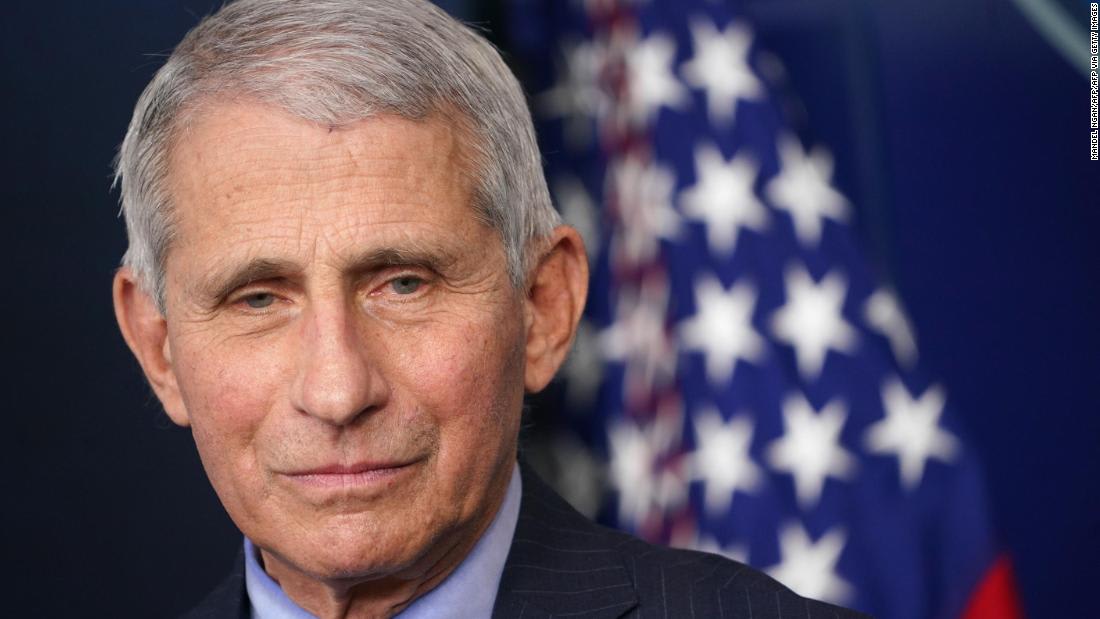 An influential model that is forecasting 569,000 Americans will die from Covid-19 by May 1 does not take into account new variants of the virus that are potentially more contagious, the scientist leading the modeling team said Monday.

The Institute for Health Metrics and Evaluation (IHME) at the University of Washington released a new forecast Sunday that also predicts a third wave of infection late this year unless people get more eager about the vaccine. But the model also sees cases and deaths tapering off starting in March and April.

“These numbers don’t yet account for the new variants. We will be putting out models at the end of the week that will, and that will change the picture,” IHME director Dr. Christopher Murray told CNN’s Anderson Cooper.
“But the decline that we expect to see is coming because we're at the peak of seasonality,” Murray said.
“That's going to start driving down transmission, and we're seeing vaccination scale up, so … we expect to start coming off the peak in the coming weeks.”
Vaccines will make a real difference, Murray predicted. “I think the vaccine will prevent a lot of death,” he said. “But it's pretty likely we believe that there will be a third wave of transmission in the winter of 2021.”

Vaccine uptake: The prediction of a third wave is not because of more transmissible new variants, but because people may not get vaccinated in the numbers needed, Murray said.

“Well, it's about half say no -- a quarter are not sure, and a quarter say no,” he said. “So, it's the quarter not sure that we've got to focus on and convince them that the vaccine is really important for them and important for their family or for the community.”

Half of Americans say they do plan to be vaccinated.