The inclusion of several African countries on the UK's travel ban list came as a surprise, the director of the Africa Centers for Disease Control and Prevention told CNN Thursday.

“The United Kingdom has the right to do what they have to do, but we have to understand that if we do not use a coordinated and measured approach it will be extremely difficult to come out of this pandemic,” Dr. John Nkengasong said.

The UK Department for Transport list includes more than a dozen African countries where the South African variant of coronavirus are believed to be spreading, while some notable countries are excluded.

The United States, France, and Israel are not on the banned the list, although the South African or Brazilian variants of coronavirus have been detected there. Portugal is the only European country on the UK's list and was included because of its strong travel links to Brazil, British Transport Secretary Grant Shapps said earlier this month.

Yet the European Centre for Disease Prevention and Control and World Health Organization have warned about variants reported in other European countries.

“From a public health standpoint, what we should be doing is requiring that people travel with a negative Covid-19 test. It’s not about the variant, it’s about whether you are infected or not infected," Nkengasong said.
"If an African is traveling to the UK and shows a negative Covid test, that person doesn’t cause a risk to you. So the geographic origin of an individual doesn’t really matter, what matters is, are you coming in with a valid negative Covid test?”

The tense quiet outside the small hospital in Iranduba, Brazil, shattered when the ambulance rolled up.

Inside, medics give a woman CPR in an ultimately futile attempt to save her life. A hospital source told CNN she died soon after being brought inside.

The chaos has become the norm here this month. What's happening in this underequipped hospital, surrounded by the Amazon rainforest, is a small example of a new, massive Covid-19 outbreak engulfing northwest Brazil.

How is this happening again? Not far from Iranduba is the epicenter of this new outbreak, Manaus. The capital city of Amazonas state often referred to as the gateway to the Amazon, its main connections to the rest of the world by plane or boat.

If the city's name sounds familiar, it could be because it was the scene of one of the world's worst Covid-19 outbreaks in April and May. The healthcare system collapsed and images of thousands of newly dug graves became emblematic of Brazil's coronavirus crisis, its death toll now second only to that of the United States.

The current situation is worse than ever. January has proven to be the deadliest month of the pandemic in Manaus by far.

In May, 348 people were buried here, the worst month until now. Through just the first three weeks of January, that number stood at 1,333.

While genomic testing is not widespread in Manaus, scientists tell CNN that evidence suggests a new virus variant mixed with government inaction to create a tragic perfect storm. 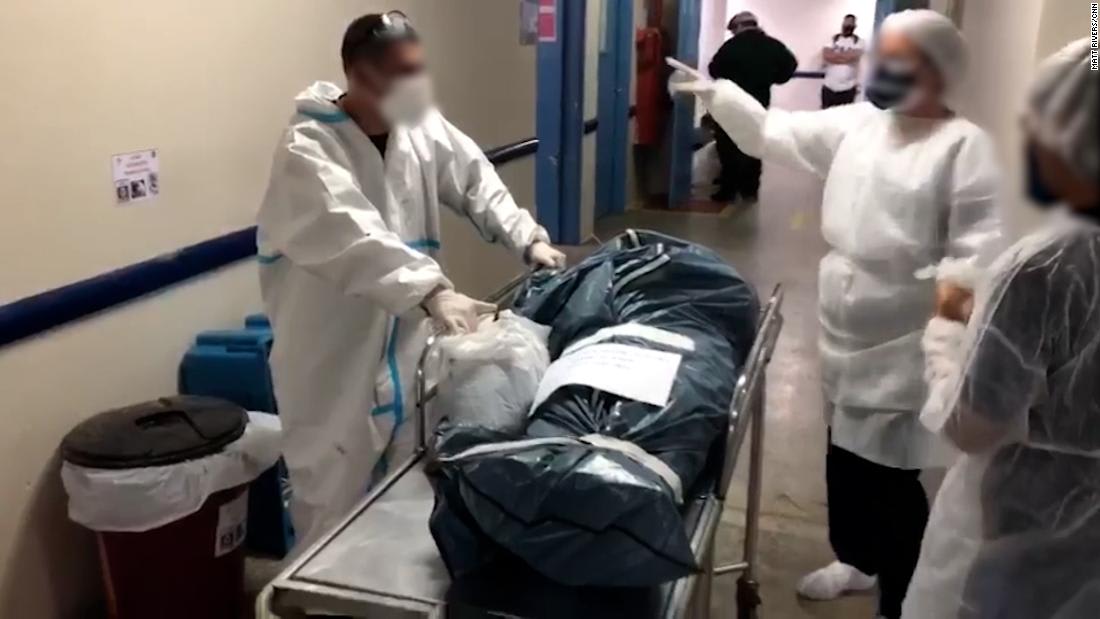 Is a new coronavirus variant to blame for this Brazilian city's collapse?

A team of World Health Organization scientists investigating the origins of the coronavirus pandemic left their hotel in Wuhan Thursday after completing a two-week quarantine in the central Chinese city.

The 13 team members could be seen on a live television feed walking out of the hotel wearing face masks and boarding a bus, onto which their luggage had been loaded earlier by workers in hazmat suits. The team was waved on its way by hotel staff and Chinese officials.

“We are aware of it, there is no way around that. That’s why we really try to keep focused, we are scientists, we are not politicians, we are trying to really look at this from the scientific perspective,” she said.

Part of that involves abandoning all preconceived notions about how the virus evolved and spread, to look at what the evidence says, and go from there, Koopmans said. The team has spent the past two weeks in video calls with each other and Chinese scientists, “discussing what we know, what we don’t know.”

Demand for answers will be great, especially after the investigation itself was delayed several times, but Koopmans cautioned patience.

“I think we really have to manage expectations, if you look at some of the earlier quests for the origins of outbreaks, they have taken years to complete,” she said. “The early and relatively easy studies have been done, have already been published.”

Thai police arrested 89 foreigners on suspicion of breaching coronavirus restrictions after raiding a party at a bar on a popular resort island in southern Thailand, police told CNN on Thursday.

Police said 22 Thais were also detained in the raid Tuesday night at 360 Bar on Koh Phangan.

Attendants and organizers of the party are facing charges of violating an emergency decree which was put in place last March to combat the coronavirus. Most of them have been released on bail, and only 28 are still being detained, said Police Col. Panya Nirattimanon, chief of Koh Phangan provincial police station.

Among the foreigners arrested were 20 French, 10 Americans and six Britons. All of the arrested were swabbed by local health authorities and found negative for Covid-19, Nirattimanon said.

“They are stranded tourists who can't leave Thailand due to Covid,” Nirattimanon said. “They may think it is OK to gather in large groups and I think they may want to relax and have some fun.”

The maximum penalty for violating the emergency decrease is two years’ imprisonment and/or a fine of up to 40,000 baht ($1,330). The organizers are facing an additional charge of serving alcohol as this area in Thailand is banned from serving alcohol inside restaurants under the emergency law.

“We are going to keep this measure in place for a preliminary period of 30 days,” Ruiz said, adding the suspension was an effort to contain the spread of a new strain of Covid-19 first spotted in Brazil.

While Colombia has reported more cases in January than in any other month since the start of the pandemic, it has not officially reported any cases caused by new variants of the virus.

FedEx will delay temporarily relocating Hong Kong-based crew members to the San Francisco Bay Area until an implementation date of a 14-day hotel quarantine requirement for local crews is officially announced by the Hong Kong government, according to a memo dated Thursday seen by CNN.

Crew members and their families who would like to transition to the United States prior to the implementation date will be able to do so, the company added in its latest memo.

According to another memo seen earlier by CNN, FedEx believes the extended quarantine requirement for Hong Kong-based pilots is “likely with no exceptions."

If the rules come into effect, Hong Kong-based crew members and their families could be relocated as soon as February 1, with the company covering out-of-pocket expenses and providing lodging.

An employee at FedEx, who asked not to be identified due to a lack of authorization to speak to the media, estimated the move affects around 180 Hong Kong-based FedEx pilots.

“While we don’t know what the rule will state, when it will precisely take effect, or how long it will last, we do not want unknowns to prevent us from taking action based on what we understand may likely occur,” the company said in the memo.

The company said the new requirement would deprive Hong Kong-based crew members of the ability to go home and see their families if their next trip was within 14 days. “We do not believe it is appropriate to subject HKG crew members to these extended periods of isolation,” the company said in the memo.

FedEx said in another memo seen by CNN that it expects an announcement will likely be issued this week and the quarantine requirement could go into effect on or shortly before February 12.

This post has been updated with details of the latest FedEx memo seen by CNN.