The B.1.1.7 variant of Covid-19, colloquially known as the UK variant, has been detected in Kansas, according to a news release from the Kansas Department of Health and Environment (KDHE).

An Ellis County resident was discovered to have the UK variant on Wednesday afternoon, and an investigation is underway to determine if others may have been exposed, KDHE says. No additional information about the patient is available.

“This finding does not change our public health recommendations. We continue to encourage people to take the appropriate precautions: follow isolation and quarantine recommendations, practice physical distancing, wearing masks, good hygiene, staying home if ill and getting the vaccine if you are able to, once the supply is sufficient,” said KDHE Secretary Dr. Lee Norman in a statement.

Some context: The B.1.1.7 variant has been reported in more than 30 states, according to the US Centers for Disease Control and Prevention. However, very few samples from infected people are being tested, so there is no way to know just how common the new strains are in the country.

The testing of more than 500 Australian Open players, officials and support staff who went into isolation will be completed by 5 p.m. (1 a.m. ET) Thursday, according to Tennis Australia CEO Craig Tiley.

The players and staff went into isolation after a hotel quarantine worker tested positive for Covid-19 in Melbourne on Wednesday. The unnamed man last worked at the Grand Hyatt on January 29, and returned a negative test at the end of his shift. He only developed Covid-19 symptoms the following week.

Of the 507 people staying at the hotel, 60 are players, Tiley said on Thursday. They will all need to return negative tests before they can be released from isolation.

Tiley added that all the players are “casual contacts” and that there is a “very low probability that any will test positive.”

All play at Melbourne Park tennis center set for Thursday has been suspended to allow for the players and staff to be tested. The fixtures for Friday will be announced later on Thursday, and the draw for the Australian Open will be postponed to Friday, Tiley added.

The Tennis Australia boss said the affected warm-up matches would be rescheduled, time permitting. “Everything remains as is, just with a day delay, until further notice,” Tiley said.

Health authorities are still learning about the new coronavirus variants, and whether current health measures are as effective against them -- but data suggests that the B.1.1.7 variant, first identified in the UK, may be deadlier than the original strand.

"We know that some of the variants have increased transmissibility, there's increasing data that suggests that some of the variants, the B.1.1.7 variant may actually ... lead to increased mortality, and the jury's still out with regard to how these vaccines are going to work with against these variants," said Dr. Rochelle Walensky, director of the US Centers for Disease Control and Prevention, on MSNBC Wednesday.

"We'd have to ... follow the science, and we are learning more and more about whether our public health measures, our mitigation measures, our mask wearing, our distancing, will be fully effective against these variants, but we have every reason to believe that they will."

Walensky added that as authorities examine more people infected by the variants, they are finding that those people are typically not wearing masks or social distancing. "What we know is that they'll (variants) probably be less forgiving when we don't follow that guidance," she said.

Hundreds of grocery store workers in Long Beach, California may soon be without jobs after Kroger announced it will permanently close two stores to avoid offering workers hazard pay during the pandemic.

The citywide hazard pay ordinance requires large grocers to pay their staff an extra $4 per hour for at least four months since workers face higher risk of exposure to the virus.

"It’s a slap in the face when they don’t want to pay us what we deserve, putting our lives on the front line,” said Clara Vega, general manager at one of the closing stores, a Food 4 Less supermarket. “We work so hard, we work so much overtime, it’s ridiculous.”

"Since the pandemic began, Kroger has made billions in profits because of the sacrifices of grocery workers who have been putting their own health and safety on the line every day," UFCW International president Marc Perrone said in a statement.
"Rather than provide the hazard pay these grocery workers have earned and deserve, Kroger decided to threaten these workers and the community’s access to food in the middle of a public health crisis."

Profit during the pandemic: The two stores slated for closure experienced sales increases of up to 31% since the start of the pandemic, according to Ron Herrera, president of the Los Angeles County Federation of Labor.

Herrera said Kroger has recently seen a 90% profit increase and spent $1.4 billion in stock buybacks. CNN has reached out to Kroger for comment on its earnings.

Robert Gonzalez, a frozen food clerk at the Food 4 Less, said he was devastated to learn his store will be closing after working for Kroger for 26 years.

"After all the hard work I've done to feed the needy families and risk my life and my family's lives at home, they don't want to pay $4 extra an hour for four little months," Gonzalez said. "We also give donations every week to the homeless and needy families and they want to take that away. That is so wrong and evil."

There have been at least 450,680 reported deaths from Covid-19 in the United States since the pandemic began, according to data compiled by Johns Hopkins University.

At least 26,554,216 total coronavirus cases have been reported in the US, university data showed.

Johns Hopkins recorded the first death from Covid-19 on Feb. 29 in Washington state. Later in the spring, two earlier deaths in California were posthumously confirmed to be from Covid-19.

There are four other countries in the world that have reported over 100,000 total Covid-19 deaths, according to the university. Brazil has more than 200,000 total deaths while Mexico, India, and the United Kingdom have over 100,000.

The coronavirus pandemic continues to rage across the world, and in the United States, January marked the deadliest month of the pandemic so far. At the same time, the worldwide race to distribute vaccines is on.

If you're just catching up now, here's a look at the latest vaccine news:

President Joe Biden told House Democrats on a conference call Wednesday he is open to narrowing the distribution of $1,400 stimulus checks in his Covid-19 relief proposal to focus on poor and middle-class people, according to audio of the call obtained by CNN

"I think we can better target the number," he said, according to the recording.

In the call, Biden also warned his party about the dangers of engaging in intraparty battles, contending their strength is in their unity with narrow majorities in both the House and the Senate.

"We hold a small majority in the House, and the barest majorities in the Senate, and we're gonna succeed or fail together," Biden said. "There have been three Democratic presidents in 28 years. Each one faced a tough midterm loss that cost a lot. It happened in '94 and it happened in 2010. We don't want to let that happen here. So, let's stick together."

Stimulus checks: Biden made clear he wasn't willing to dramatically drop the $1.9 trillion price tag for his plan, but also said he's willing to make the stimulus checks more narrowly targeted. Biden told House Democrats the additional $1,400 stimulus checks are a key component of the White House package, saying of the checks "people need it and frankly, they've been promised it."

"I think we can better target the number, I'm OK with that," Biden said of the distribution of stimulus checks. "But ... I'm not gonna start my administration by breaking a promise to the American people." 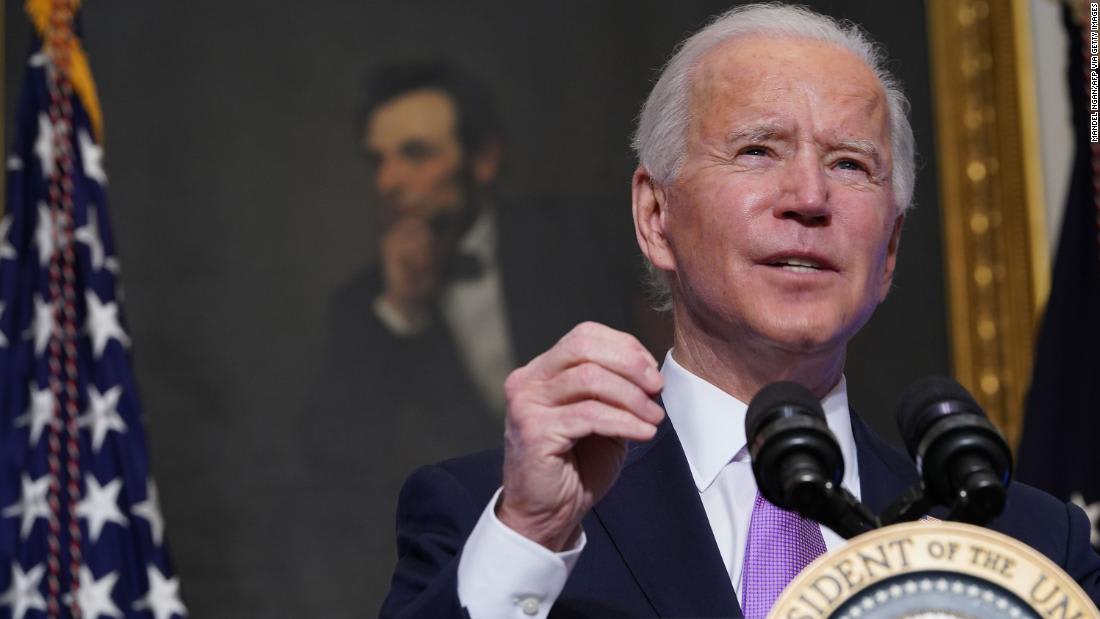 The Oxford-AstraZeneca Covid-19 vaccine appears to substantially reduce transmission of the virus, rather than simply preventing symptomatic infections, UK researchers have suggested.

If the vaccine were simply making infections milder, PCR positivity would not change, the authors argued in the preprint analysis. "A measure of overall PCR positivity is appropriate to assess whether there is a reduction in the burden of infection." 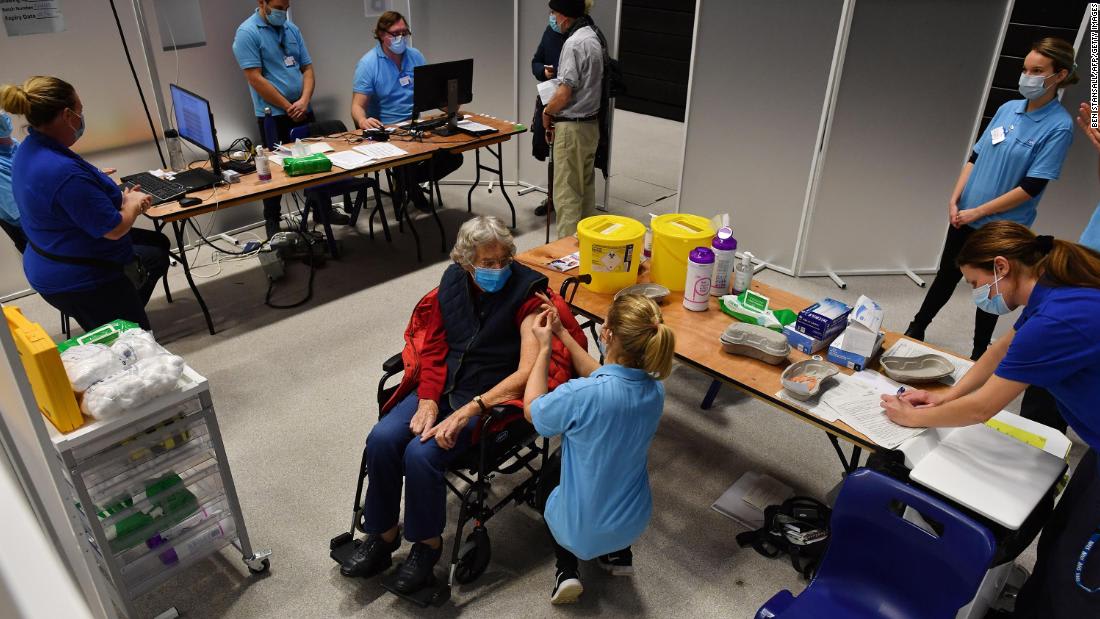