The United States reported 119,931 new Covid-19 infections and 4,941 additional virus-related fatalities on Thursday, according to a tally by Johns Hopkins University.

Thursday's figures include more than 1,500 backlogged deaths reported by the Indiana State Department of Health.

Vaccines: At least 57,489,675 vaccine doses have been distributed and at least 35,203,710 shots administered, according to the US Centers for Disease Control and Prevention.

Caps on quarantine space in the country were limited in early January due to concerns over new variants. The increased capacity will allow for 6,362 people to return to Australia each week.

Speaking at a news conference, Morrison said the priority remains to facilitate a return home for Australian residents. The government is looking to increase capacity at government-run quarantine facilities in the Northern Territory, Canberra and Tasmania, which do not fall under the current cap, he said.

No local cases were reported in the country in the past 24 hours, health authorities announced Friday. There were six imported cases from incoming travelers who are currently in hotel quarantine.

The coronavirus variant B.1.1.7, first identified in the UK, is already spreading in the United States -- and "might become dominant" in the country, said Dr. Anthony Fauci, head of the National Institute of Allergy and Infectious Diseases.

"A recent study from the UK showed that (the variant) might be somewhat more deadly in the sense of making people sicker and certainly leading to death more," Fauci told CNN on Thursday. "It might become dominant because it seems to be very efficient in spreading from person to person."

The only way to prevent the variants from becoming dominant is to stop them from spreading by following public health measures and getting as many people vaccinated as quickly as possible, Fauci said.

"We have a possibility, and the capability, of trying to stop them from becoming dominant," he added.

About the variant: The B.1.1.7 strain had been circulating in Kent, England, since at least September. It spreads 30-70% more easily than the original strand of the virus, according to Britain's chief scientific adviser Patrick Vallance.

UK scientists have also found a mutation in some samples of the variant, that could allow Covid-19 to escape antibody protection.

The variant has now been spotted in at least 70 countries, and most US states.

An international vaccine watchdog is urging drugmakers to share their science to meet the global demand for coronavirus vaccines, instead of pursuing profits at the expense of poorer countries.

The People’s Vaccine Alliance, which includes members of Amnesty International and Oxfam, said in a statement that if vaccine production and distribution continues as it is now, only one in 10 people will be vaccinated in many developing countries by the end of the year.

“By refusing to share their technology and waive their intellectual property, companies like Moderna and Pfizer/BioNTech, are artificially rationing the supply of successful vaccines with hopes of reaping huge financial rewards,” Oxfam Health Policy Manager Anna Marriott said on behalf of the alliance.
“This is despite both benefiting from huge public subsidy. This will cost lives and prolong the economic pain which is hitting the poorest hardest.”

At the time of their analysis, about 108 million people worldwide have been vaccinated against Covid-19 -- but only 4% of those doses were administered in developing countries, according to Our World Data. Pfizer/BioNTech and Moderna have sold almost all their doses to rich nations, the group said.

“Business as usual is not enough in a global pandemic,” said Heidi Chow of Global Justice Now in the group's statement.

"In times of war, manufacturers have often put aside normal competition to work together for a common cause. Surely governments should be insisting that the same spirit applies today, when so many people’s lives and livelihoods are at stake?"

I woke to the sound of my fiancée muttering "f*@!" under her breath on Christmas Eve.

While we were sleeping, the Hong Kong government had announced that all residents of the city returning from abroad must now spend three weeks in hotel quarantine instead of two, at their own expense -- effective Christmas Day.

We were supposed to return to Hong Kong from the United States in fewer than 48 hours. We had booked a hotel for two weeks to comply with the government's regulation -- which required travelers like us to purchase a hotel room even if they owned or rented a home in Hong Kong -- but this new hiccup could prevent us from getting back.

What if our hotel couldn't extend our reservation before our flight? Were exceptions being made for people who were about to hop on a plane? And, could we even afford to spend 21 days in a hotel room -- financially, physically and mentally?

We needed answers: The Hong Kong government's coronavirus website had basic information, but not advice and guidance from people who had already started dealing with this new reality.

So we turned to the HK Quarantine support group on Facebook, boasting nearly 30,000 members. The group has become an invaluable resource -- what started as a simple idea to connect people in quarantine with volunteers who could get them groceries has grown into a massive, crowdsourced platform with resources on almost every aspect of the arduous journey, 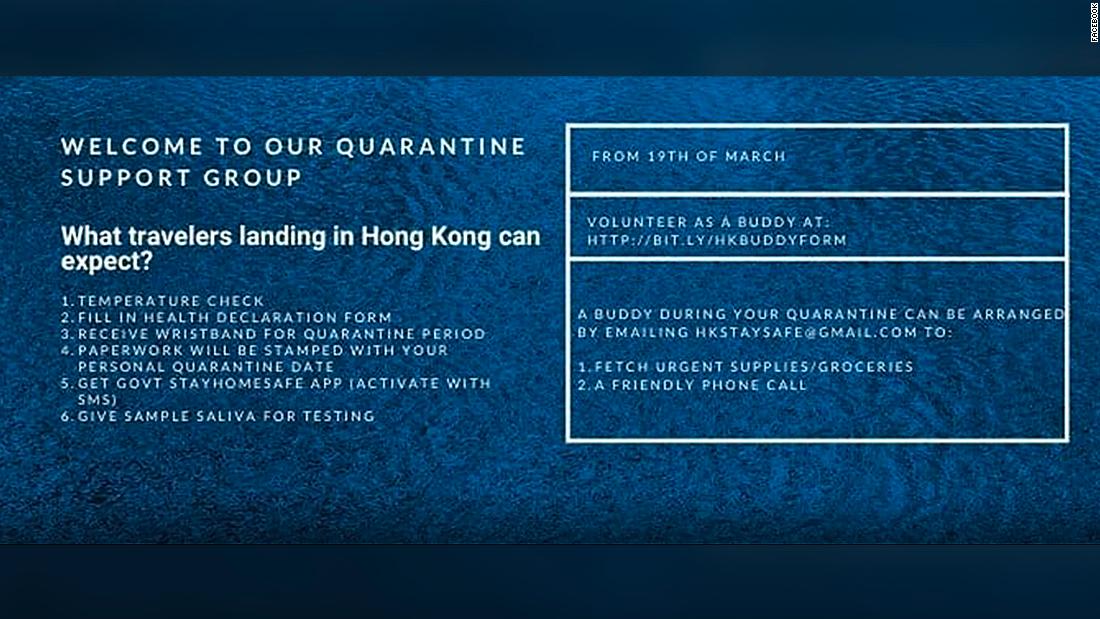 How a 30,000-member Facebook group is helping Hong Kong navigate one of the world's longest quarantines

It’s too soon for people to think they might be able to pick and choose among coronavirus vaccines, said Dr. Anthony Fauci, head of the National Institute of Allergy and Infectious Diseases.

Even with Johnson & Johnson asking the Food and Drug Administration for emergency use authorization of its vaccine, there’s just not enough vaccine available, Fauci told CNN on Thursday.

"I don't think right in the beginning they will, because right now, the demand is far excess of the supply. So, people will, I think, gladly take whatever is available to them," Fauci said.

"As we get through February, into March, and April, and May, when the amount of vaccine becomes much more plentiful, there is certainly a possibility that people will know that this particular vaccine is maybe given in the pharmacies, and this you might get in a clinic, or in your doctor's office, or wherever. They could potentially have a choice," Fauci said.

The Pfizer and Moderna vaccines are very similar and require two doses. Johnson & Johnson’s vaccine uses a different approach and only needs one shot to work.

Warm-up matches for the Australian Open tennis tournament resumed on Friday, after all of Thursday’s fixtures were canceled to make way for coronavirus testing.

The Australian state of Victoria recorded no local cases of Covid-19 after conducting 14,612 tests on Thursday, according to its health department on Friday.

"These are in some respects the best possible outcomes we could have hoped for,” said state premier Daniel Andrews.

Andrews added that wastewater tests in Melbourne have also not shown signs of Covid-19.

The testing blitz comes after one person connected to the Australian Open tested positive this week, canceling games and forcing 507 tennis players, staff and officials to isolate and get tested on Thursday.

The case broke a run of 28 days with no community transmission in the state of Victoria.

The Australian Open is scheduled to begin Monday.

California's San Quentin State Prison, where a deadly coronavirus outbreak was reported last summer, has been fined more than $400,000 for workplace safety violations.

The state's Department of Industrial Relations' division of occupational safety and health (Cal-OHSA) issued nearly 15 violations, culminating in a $421,880 fine -- one of the highest penalties issued by the state for Covid-19 violations.

The prison failed to report infections or deaths of employees, according to the violation. From June to July, there were five instances of employees hospitalized with Covid-19.

Inspectors also found that there were no “suitable cleansing agents” in the employee restroom. The eyewash station was also inaccessible.

“San Quentin State Prison has made many improvements and already remedied several of the citations in the eight months since Cal-OSHA visited the institution. The visits took place last June and July, and we have worked with Cal-OSHA representatives throughout the pandemic to ensure regulations were met and concerns addressed expeditiously,” the California Department of Corrections and Rehabilitation (CDCR) said in a statement.

More than 40% of inmates there have tested positive for Covid-19 in the past two weeks, according to the CDCR.

The US Food and Drug Administration has scheduled a meeting of vaccine advisors to discuss Johnson & Johnson’s request for emergency use authorization (EUA) for its coronavirus vaccine.

Johnson & Johnson said earlier Thursday it had applied for the EUA on behalf of its Janssen Biotech vaccine-making subsidiary. The timing means the FDA would not decide on authorization before the end of the month.

“In terms of timing for convening the VRBPAC meeting following the submission of the EUA request, this amount of time will allow the FDA to thoroughly evaluate the data and information submitted in the EUA request before the meeting and to be prepared for a robust public discussion with the advisory committee members,” the FDA said in a statement.

The FDA added that it cannot predict how long it would take to made a decision, but that the agency would review the request "as expeditiously as possible ... while still doing so in a thorough and science-based manner."