New localized “red zones” have been imposed in areas across Italy after the new variants were identified in them.

They will be in place until February 21, the regional government of Umbria said on Saturday.

The UK and Brazilian Covid-19 variants were detected on a sample of 44 cases recently analyzed by the Italian Health Institute, the local government said on Saturday.

The Italian Health Institute’s report said it "induces to believe" that the presence of the variants contributed to a rise in positive cases in the provinces of Perugia and Terni.

On Sunday, the Tuscan town of Chiusi, located near the border of Umbria, also became a red zone after the South African and Brazilian variants were detected within the community, according to the town’s mayor. On Friday, Juri Bettollini said that the restrictions will last a week and that mass, voluntary testing will be carried out in the town from Monday.

The Northern autonomous province of Bolzano (South Tyrol) has also been placed under a red zone on Monday, a measure that will be in effect until February 28, according to the local government.

The Bolzano government said in a statement on Saturday that they had made the decision after the first case of the UK variant was detected in the province.

Red zone restrictions were also imposed on Saturday to three other municipalities in the region of Abruzzo.

Most Italian regions are currently in "yellow zones," the lightest of a three-tier system of restrictions.

The remaining regions of Umbria, as well as Sicily and Puglia, are currently in the "orange zone,” where people are prohibited from leaving their town and their region -- except for work or health reasons -- and bars and restaurants are only offering delivery and take-away services.

Over 140 people in the UK are infected with the South African variant, but it's not the most dominant strain in the country, the UK Junior Health Minister said on Monday.

Speaking on the BBC Breakfast program, Edward Argar, the UK Minister of State at the Department of Health, said that 147 people have been infected with the variant first identified in South Africa, known as B.1351.

Argar said there was no evidence the Oxford/AstraZeneca vaccine was not effective in preventing severe illness or death.

The study, released by South Africa's University of Witwatersrand on Sunday, showed that two doses of the Oxford/AstraZeneca vaccine provide limited protection against mild or moderate cases of the South African variant.

There is “still some hope” that the Oxford/AstraZeneca Covid-19 vaccine could perform in people infected with the variant first identified in South Africa who are at risk of severe disease, Shabir Madhi, professor of vaccinology at the University of the Witwatersrand said on Monday.

Early data from South Africa’s University of Witwatersrand released on Sunday suggested that two doses of the Oxford/AstraZeneca Covid-19 vaccine provide only “minimal protection” against mild and moderate Covid-19 from the B.1.351 variant.

“What the study results really tell us is that in a relatively young age demographic with very low prevalence of morbidities such as hypertension and diabetes, the (Oxford/AstraZeneca) vaccine does not protect against mild to moderate infection,” Madhi, who led the trial, told the BBC.

Madhi added that “extrapolating” from results seen with the Johnson & Johnson Covid-19 vaccine -- which is also a viral vector vaccine --  there was “still some hope” that the Oxford/AstraZeneca vaccine could perform “as well” in different age groups at risk of severe disease.

“Now these two vaccines use a similar sort of technology," Madhi explained.

"They use them very, very similar in terms of the immunogenicity so I think extrapolating from that, there's still some hope that the AstraZeneca vaccine might well perform as well as the Johnson & Johnson vaccine in a different age group demographic that are at risk of severe disease,” he said.

He also said that researchers should know with more certainty “pretty soon.”

On Sunday, South African health officials said they were pausing the country's rollout of the Oxford/AstraZeneca vaccine after the study showed it offered reduced protection from the Covid-19 variant first identified there.

Doctors, members of the military and National Guard will be among the first in line for shots, Zelensky said. "The program covers at least half of the population of Ukraine during 2021 and early 2022," he added.

Last week, Prime Minister Denys Shmyhal said that Ukraine will be receiving an initial shipment of 117,000 doses of the Pfizer/BioNTech vaccine under the COVAX program.

Speaking in a Cabinet meeting on February 3, Shmyhal said that from February to early March, "much larger deliveries are expected."

Ukraine has reported nearly 1.3 million Covid-19 cases and almost 25,000 deaths from the disease, according to Johns Hopkins University data.

While a recent dip in Covid-19 infections may seem encouraging, experts warn now is not the time for Americans to let their guard down.

That's largely because of new variants circulating in the US, putting the country once again in the "eye of the hurricane," according to one expert.

"I've been on Zoom calls for the last two weeks about how we're going to manage this," Dr. Peter Hotez, dean of the National School of Tropical Medicine at Baylor College of Medicine, told CNN Sunday. "The big wall is about to hit us again and these are the new variants."

Nearly 700 cases of Covid-19 variants first spotted in the UK, South Africa and Brazil have been reported in the US so far, according to data updated by the Centers for Disease Control and Prevention.

The vast majority of those cases are the B.1.1.7 strain, which was first detected in the UK and has now been spotted in at least 33 states. Experts say the highly contagious variant will likely soon become dominant in the US, and a new study found significant community transmission may already be occurring.

"This could be really, very dire for our country as we head into the spring," Hotez said of the variants. "Now, we're in a race. We're in a race to see how quickly we can vaccinate the American people."

And a third vaccine could be on its way to the US market soon: Johnson & Johnson asked the Food and Drug Administration for an emergency use authorization of its vaccine last week. 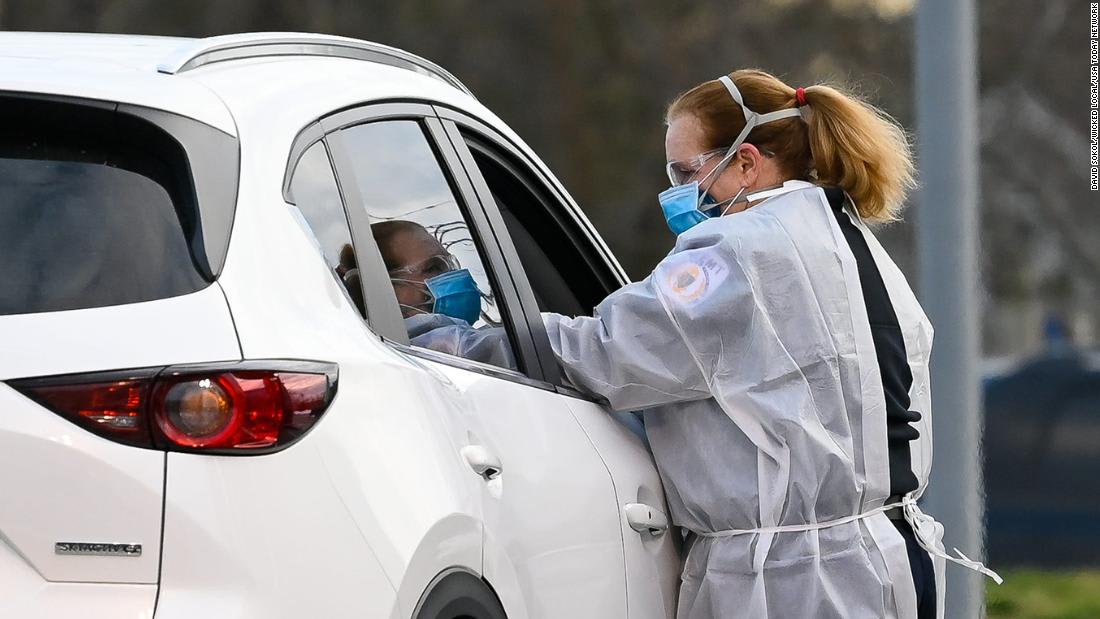 Despite dip in Covid-19 cases, expert says US is in the 'eye of the hurricane' as variants spread

The South Korean capital of Seoul will start testing pet dogs and cats for Covid-19 if their owners test positive and the animals themselves are symptomatic, according to the city’s top health official Park Yoo-mi.

Park said the city’s animal sample collection team will visit the home of quarantined Covid-19 patient to test the pets.

The testing is being done out of an abundance of caution -- Covid-19 pet-to-human infection has not been reported since the pandemic began. Any dogs or cats testing positive will be required to quarantine for 14 days.

South Korea reported its first case of an animal Covid-19 infection after a household cat tested positive for the virus on January 21, according to the country's Disease Control and Prevention Agency (KDCA.)

Play has begun at the Australian Open in Melbourne, tennis' first grand slam of the year -- and fans are there to take in the action.

The start of the event was delayed three weeks due to Covid-19, but spectators came out in force today for the first day of the tournament -- many relishing the fact that they are some of the few people on the planet able to attend live sports during the pandemic.

Authorities are allowing fans to attend because regional authorities have been able to bring the local coronavirus epidemic under control thanks to strict public health measures.

Australia's government quickly closed its borders in March at the start of the pandemic, banning non-residents from entering the country, and put in place mandatory hotel quarantine of 14 days for incoming travelers.

When Melbourne, where the Open is being held, had a coronavirus outbreak in mid-2020, Victoria's government put the entire state into mandatory lockdown for almost four months, one of the longest measures of its kind in the world.

Things are a bit more lax now. At Melbourne Park, it's only mandatory to wear a mask indoors at the event, but many milling around outside were also seen with face coverings.

"We will begin the first phase of vaccination protecting the first line of Peruvians who risk their lives for us,” he added.

Sagasti said 300,000 doses of the vaccine arrived in the coastal city of Callao aboard an Air France plane. The rest of the country's 1 million-dose order is scheduled to arrive on February 14.

In a message posted to his Twitter account, Sagasti thanked Peru's civil society along with the country's public and private sector for making "this achievement possible."

The United States reported 86,928 new Covid-19 infections and 1,268 additional virus-related fatalities on Sunday, according to a tally by Johns Hopkins University.

Vaccines: At least 59,307,800 vaccine doses have been distributed and at least 41,210,937 shots administered, according to the US Centers for Disease Control and Prevention.