The United States reported 92,666 new cases of Covid-19 and 3,031 additional virus-related deaths on Tuesday, according to a tally by Johns Hopkins University.

Vaccines: At least 62,898,775 vaccine doses have been distributed and at least 43,206,190 shots administered, according to the US Centers for Disease Control and Prevention.

A World Health Organization expert who was on the team of scientists investigating the origins of Covid-19 in the central Chinese city of Wuhan said people shouldn't "rely too much on US intel" around the coronavirus.

In a tweet Wednesday responding to an article about the United States wanting to "independently" verify WHO findings out of Wuhan, expert Peter Daszak said "don't forget, it's 'TRUST' then 'VERIFY'!"

Daszak added that US President Joe Biden "has to look tough on China" but urged him against relying on the US intelligence services, which he said were "increasingly disengaged under Trump (and) frankly wrong on many aspects."

"Happy to help the (White House with) their quest to verify," Daszak said.

No fast answers: On Tuesday, after the WHO team wrapped up their investigations in Wuhan, Daszak told CNN that while scientists will eventually "get a really clear picture" of how Covid-19 originated, it may take weeks, months or even a "couple of years."

He added that a "patient zero" still has yet to be identified and may never be, as many cases were asymptomatic.

Reading Chinese state media coverage, you could be forgiven for thinking the World Health Organization's investigation into the origins of Covid-19 had ruled out Wuhan as the potential source of the pandemic.

Ahead of their four-week visit to the central Chinese city, which wrapped up this week, the WHO team had warned their research might not turn up anything particularly groundbreaking. They cited the length of time since infections first started spreading in Wuhan, and the degree to which the city has been disinfected and sterilized since, as residents endured a lengthy lockdown and subsequently returned to relative normality.

And so therefore -- while somewhat disappointing -- it was no shock that the team did not reveal any major surprises in presenting their findings Tuesday. The most definitive the investigators could be was in dismissing suggestions that the virus escaped from a Chinese lab dedicated to studying such infections. On most other issues, the WHO experts prevaricated or admitted there was no clear evidence.

"Did we change dramatically the picture we had beforehand? I don't think so," said Peter Ben Embarek, one of the WHO investigators, at a news conference. "Did we add details? Absolutely."

State media's take: Chinese state media used comments from the fiercely apolitical scientists to vindicate various propaganda priorities, chief of which is the suggestion that the virus could have come from outside China.

China Daily, a state-run newspaper targeting international readers, ran the headline "WHO team: Probe of virus' origin should not be 'geographically bound'," while Global Times, a nationalist tabloid, took it a step further, saying WHO was ready to "scrutinize Southeast Asia" as a potential origin of the virus. 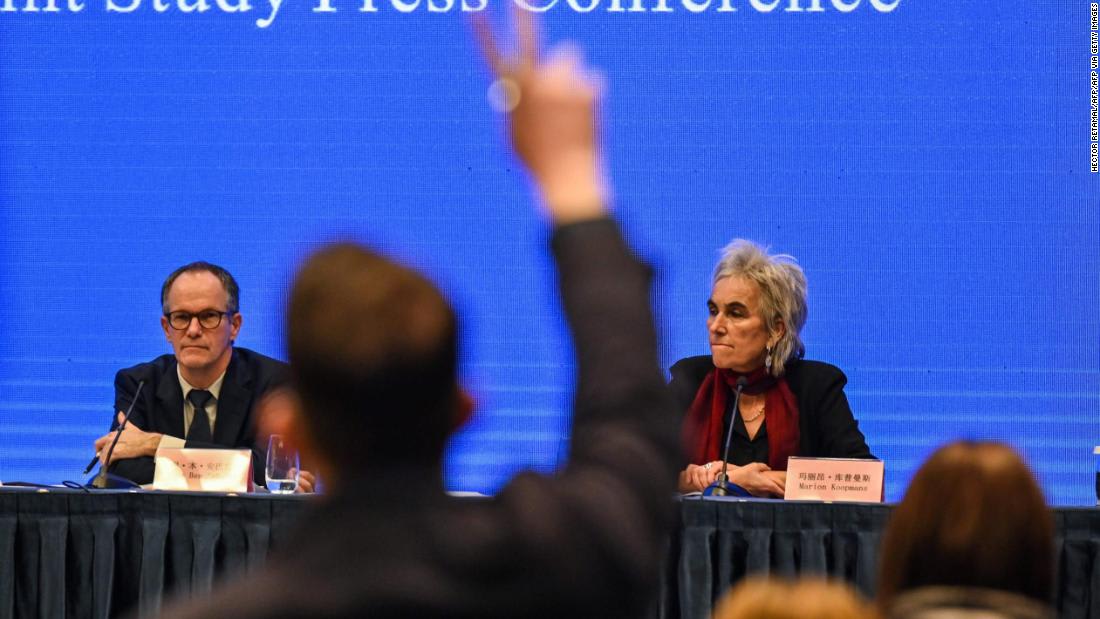 Analysis: China seizes on lack of WHO breakthrough in Wuhan to claim coronavirus vindication

The coronavirus variant B.1.1.7, which was first identified in the United Kingdom on September 20, has now been reported in 86 countries, the World Health Organization says.

In its weekly epidemiological update, WHO says the variant B.1.1.7 has shown an increase in transmissibility, and some evidence of increase in disease severity based on preliminary findings. As of February 7, an additional six countries have reported cases of this variant.

Other variants: Additionally, WHO has also been monitoring two additional coronavirus strains that are actively spreading: B.1.351, initially seen in South Africa, and the P.1 strain that was first identified in Brazil.

Some context: Scientists are not surprised to see the coronavirus changing and evolving but they fear that a variant could mutate to the point that it causes more severe disease, bypasses the ability of tests to detect it or evades the protection provided by vaccination.

South Africa this week paused its rollout of the AstraZeneca Covid-19 vaccine after a study showed it offers less protection against the B.1.351 variant.

The US Food and Drug Administration has granted emergency use authorization to a new version of Eli Lilly and Co’s antibody treatment for coronavirus that adds a second monoclonal antibody to one already authorized, the company said Tuesday.

The new treatment adds etesevimab or LY-CoV016 to the already authorized bamlanivimab or LY-CoV555 to make a double-antibody version -- one that might be more protective, the company says. Rival Regeneron has a dual antibody-cocktail on the market already.

Monoclonal antibodies are lab-engineered versions of highly targeted human antibodies chosen for their specific ability to neutralize, in this case, coronavirus.

"Bamlanivimab and etesevimab, administered together, are authorized for emergency use for the treatment of mild to moderate COVID-19 in adults and pediatric patients (12 years of age and older weighing at least 40 kg) with positive results of direct SARS-CoV-2 viral testing, and who are at high risk for progressing to severe COVID-19 and/or hospitalization,” the FDA said in a statement.

Some experiments had indicated that variants of the coronavirus that have developed mutations could evade the effects of Lilly’s single antibody.

"The EUA is based on Phase 3 data from the BLAZE-1 trial, announced January 26, 2021, which demonstrated bamlanivimab and etesevimab together reduced the risk of COVID-19 hospitalizations and death by 70 percent. These data replicate earlier results, published in The Journal of the American Medical Association, in a much larger group of patients,” Lilly said in a statement.

For the fourth week in a row, the number of new cases of Covid-19 reported across the globe have declined, according to data from the World Health Organization.

In its weekly epidemiological update, WHO says more than 3.1 million new cases of Covid-19 were reported last week, which is a 17% decline from the previous week.

This is the lowest number of cases worldwide since the last week of October, about 15 weeks ago.

Out of all the regions, Africa saw the greatest decline in cases (22%), compared to WHO's previous week update, while the Eastern Mediterranean saw the smallest (2%).

The number of new deaths reported globally went down for the second week in a row, with 88,000 new fatalities reported last week, a 10% drop compared to the previous week.

Overall, new cases in the Americas accounted for more than half of all new cases worldwide, with more than 1.5 million new cases and over 45,000 new deaths.

Globally, there have been at least 105.4 million Covid-19 cases and 2.3 million deaths since the start of the pandemic.

The Chief Executive Officer of Johnson & Johnson said Tuesday that people may need an annual Covid-19 shot for many years to come in order to be protected against variants of the virus.

“Unfortunately, as (the virus) spreads it can also mutate,” Alex Gorsky told CNBC’s Meg Tirrell Tuesday during the network’s Healthy Returns Spotlight event. “Every time it mutates, it’s almost like another click of the dial so to speak where we can see another variant, another mutation that can have an impact on its ability to fend of antibodies or to have a different kind of response not only to a therapeutic but also to a vaccine.”

Johnson & Johnson asked the US Food and Drug Administration for an emergency use authorization for its vaccine on Thursday.

Experts say the J&J Covid-19 vaccine has advantages over others since it is a single shot and can be stored at regular refrigerated temperatures. Pfizer’s and Moderna's authorized vaccines both require two doses. The Pfizer vaccine needs to be kept in at deep freeze temperatures.

The FDA could authorize the J&J vaccine as early as the end of this month.

World Health Organization expert Peter Ben Embarek said that the team investigating the origins of the coronavirus in Wuhan have identified two scenarios that most likely caused the transmission of Covid-19 to the human population.

"Our initial findings suggest that the introduction through an intermediary host species is the most likely pathway and one way that will require more studies and more specific targeted research," Ben Embarek said during a news conference on Tuesday.

He added that the possibility of transmission through the trade of frozen products was also likely.

Ben Embarek also noted two other hypotheses the team had probed while investigating the origin of the virus.

One hypothesis was a "direct zoonotic spillover," meaning, direct transmission from an animal reservoir to a human.

"The hypothesis of a direct spillover from an original animal source into the human population is also a possible pathway and is also generating recommendation for future studies," he said.

The fourth hypothesis was the possibility of a laboratory-related incident, but that this was the least likely of the four to be the cause of the virus' introduction to humans.

Findings suggest that the laboratory hypothesis is extremely unlikely to explain the introduction of the virus to the human population," Ben Embarek said.

Correction: An earlier version of this story misstated Peter Ben Embarek’s name on second and subsequent references. It’s been updated.

Covid-19 numbers are getting better. But letting your guard down could be an open invitation for highly contagious variants to trample the US -- erasing the progress made.

"We're ... seeing what happens in other countries when these variants take over," emergency physician Dr. Leana Wen said. "There is (an) explosive surge, even when the countries are basically in shutdown."

The warning comes as more Americans believe there's no big risk in returning to pre-Covid life, according to a new poll.

An Axios-Ipsos poll published Tuesday showed 66% of those surveyed said they thought the risk of returning to pre-Covid life was moderate or large. That's the lowest percentage since October.

But a majority of those vaccinated -- 76% -- still see coronavirus as a high risk.

Americans shouldn't assume the vaccine rollout means it's OK to get lax with safety measures. In fact, ditching precautions now would be "incredibly risky," said Dr. Richard Besser, former acting director of the US Centers for Disease Control and Prevention.

"It is absolutely essential that we continue to do steps beyond vaccination to keep this under control," Besser said.
"The reason for that is that the more this virus is allowed to spread in our communities, the more we're going to see these variants spreading," he said.
"And if the vaccines aren't as effective against some of these variants, then we could see the gains that we're so excited about right now, we could see those reversed in a very short amount of time." 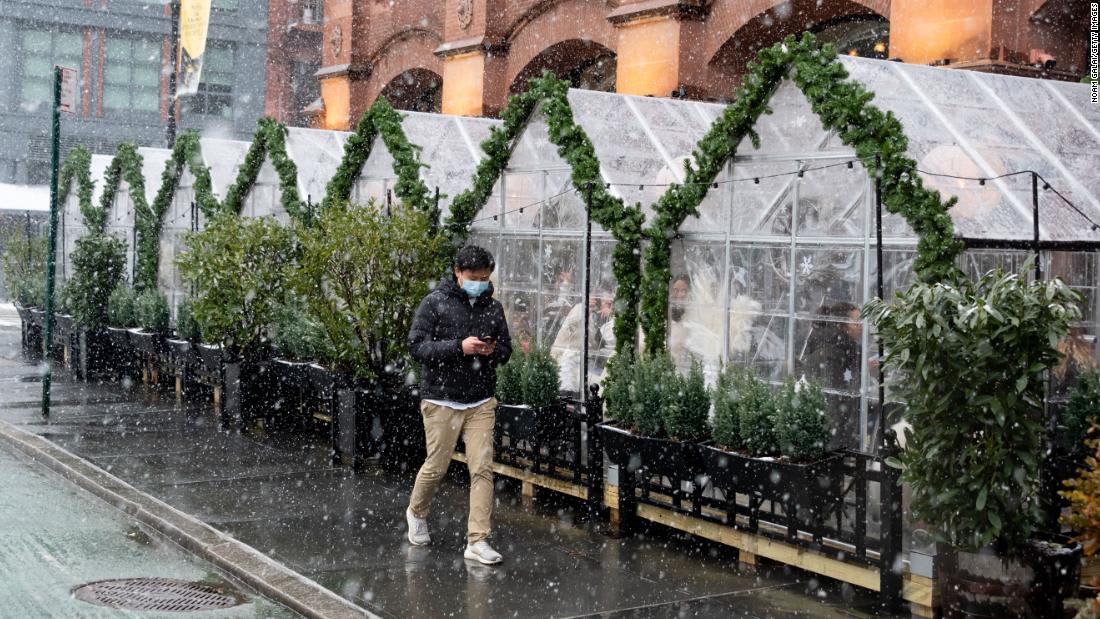