No new Covid-19 cases were reported in New Zealand yesterday, a positive sign after Auckland -- the country's most populous city -- went into lockdown because a family of three tested positive for the UK variant.

Authorities decided to mandate that most people in Auckland stay home for three days and test thousands of residents to ensure the contagious variant of the coronavirus was not spreading within the community.

More than 15,000 swabs were taken nationally Monday. None of the 5,818 processed came back positive,  Director-General of Health Dr. Ashely Bloomfield said.

Bloomfield said officials are still investigating the source of transmission for the couple and their child. Prime Minister Jacinda Ardern said Monday one of the trio works in a facility handling laundry for airlines, and Auckland Mayor Phil Goff told CNN that authorities believe the individual's employment may be "the connection" to the virus.

More results are expected to continue to come in during the day Tuesday.

Duque said during his daily televised address that the government had decided to move the vaccination schedule forward from Saturday. The campaign is beginning weeks after neighboring countries like Chile and Argentina started theirs.

Colombian health care workers will be the first to receive the vaccine.

Colombia received its first shipment of 50,000 doses of the Pfizer/BioNTech vaccine on Monday.

Duque said the government had decided to kick-start the vaccination campaign in two small cities in rural Colombia, Monteria and Sincelejo, to signal that the vaccines are destined for the entire country.

Major cities like Bogotá, Medellin and Cali will begin to vaccinate residents on Thursday.

Veronica Machado, a nurse in the intensive care unit at Sincelejo University Hospital, will be the first Colombian to receive her first inoculation on Wednesday, Duque said.

Colombia’s Covid-19 outbreak is the second-worst in Latin America, according to a tally of confirmed cases by Johns Hopkins University.

Democratic New York Gov. Andrew Cuomo is at the center of an escalating controversy over deaths in nursing homes, how they were counted and how they handled requests for that data.

Cuomo was lauded early in the outbreak for his forthright news conferences and passionate pleas for more medical equipment from the federal government. He published a book in October titled, "American Crisis: Leadership Lessons from the Covid-19 Pandemic."

Now, however, he's facing bipartisan calls for an investigation and limitations on his executive powers after a top aide said the administration delayed the release of data on Covid-19 deaths of long-term care facility residents because of concerns about a potential federal investigation by the Trump administration, at a time when former President Donald Trump was personally threatening Cuomo.

At the heart of the matter is the question of whether New York could better have prevented the state's nearly 46,000 deaths, the second-highest total of any US state so far, and whether the decision to discharge recovering residents from hospitals back to nursing homes increased infections among vulnerable elderly residents.

Here's everything you need to know about the controversy: 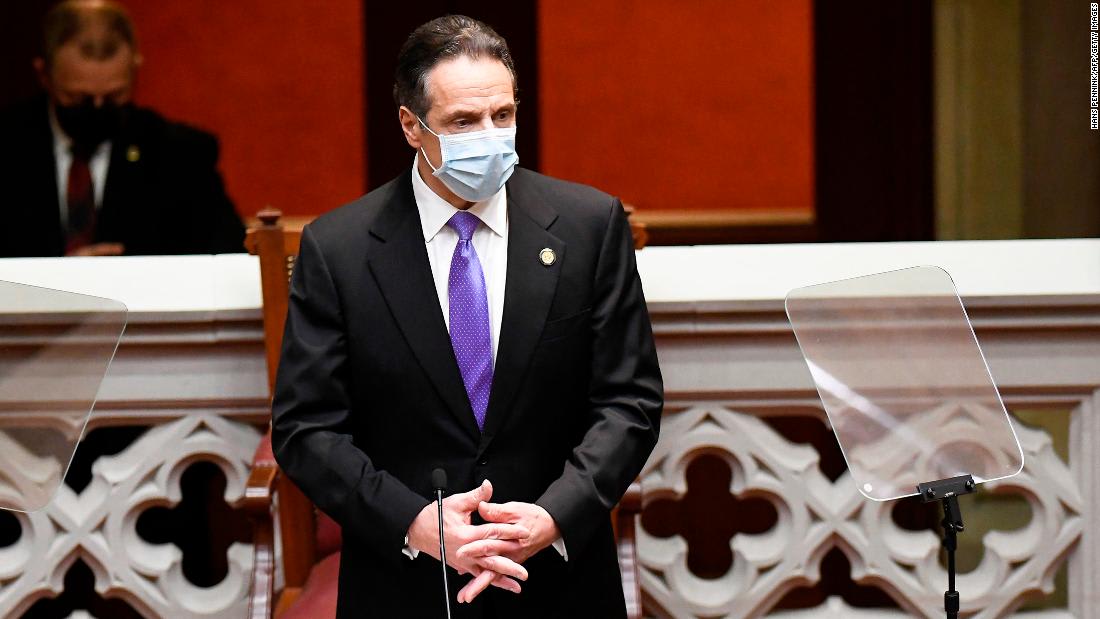 It is the second vaccine to receive such approval -- regulators have already provisionally approved the Pfzier/BioNTech Covid-19 vaccine.

Australian Prime Minister Scott Morrison's office said Monday the country had received more than 142,000 doses of the Pfizer vaccine, 80,000 of which will be released starting February 22. Approximately 50,000 will go to states and territories frontline quarantine and health workers, and 30,000 will go to aged care, disability care residents and health care workers.

Australia has secured 53.8 million doses of the Oxford-AstraZeneca vaccine, Morrison's office said in a statement.

Eight gorillas at the San Diego Zoo have made a full recovery after contracting Covid-19 last month, the zoo said.

All eight gorillas at the zoo were secluded after the diagnosis, with some showing symptoms that included “mild coughing, congestion, nasal discharge and intermittent lethargy,” the zoo said in an online update.

Zoo officials credit the gorillas recuperation to “the highest standard of care” offered by the zoo’s veterinary team, wildlife care professionals, and a collaboration with a wide array of colleagues and partners.

“We’re so grateful for the outpouring concern and support we’ve received while the troop safely recovered,” said Lisa Peterson, executive director of the San Diego Zoo Safari Park. “We’re thrilled to share the joy that this beloved troop brings to our community and to our guests.”

San Diego Zoo has committed to sharing documentation of the coronavirus in its gorillas with hopes that it will help “provide important information regarding scientific understanding of the virus and its effects on great apes.”

The gorillas are now on view for visitors.

Three sailors aboard the aircraft carrier USS Theodore Roosevelt tested positive for coronavirus on Sunday, the US Navy said in a statement.

“These Sailors, who have not experienced any symptoms, as well as all identified close contacts are currently isolated aboard the ship in accordance with Navy and CDC guidance. Shipboard health professionals conducted a thorough contact investigation and all identified close contacts have tested negative for COVID-19,” the Navy said in a statement

Last year, the same aircraft carrier was home to a significant outbreak of the virus -- more than 1,000 of the ship's nearly 4,900-member crew who tested positive for the coronavirus.

A recent Department of Defense Inspector General investigation found the leadership of the USS Theodore Roosevelt failed to put in place measures to stop a Covid-19 outbreak on board the aircraft carrier and exacerbated a growing problem by releasing sailors too early from quarantine last year.

The Navy said Monday that this time, the ship is “following an aggressive mitigation strategy in accordance with Navy and CDC guidelines” and USS Theodore Roosevelt is underway and remains fully operational.

There have been at least 27,690,574 cases of coronavirus in the US and at least 486,286 people have died from the virus, according to Johns Hopkins University's tally of cases.

At least 70,057,800 vaccine doses have been distributed and at least 52,884,356 total doses of the vaccine have been administered, according to the US Centers for Disease Control and Prevention.

As Nevada rolls out its new approach to reopening dubbed “Nevada’s Roadmap to Recovery”, Las Vegas announced it is making vaccination appointments available for people over the age of 70 and utility workers starting Wednesday.

Utility workers eligible to receive the Covid-19 vaccine include those who are employed by providers of gas, power, water and sanitation services, according to a statement from Las Vegas City Council.

The free Covid-19 vaccinations will be provided in partnership with the Southern Nevada Health District and will be administered to the aforementioned groups from Wednesday through Friday at the Chuck Minker Sports Complex.

The clinic at the Chuck Minker Sports Complex will have a limit of administering 1,100 vaccine doses a day.

The National Governors Association wrote to President Biden on Monday requesting better coordination between the Centers for Disease Control and Prevention and states on vaccine distribution.

The bipartisan group of governors raised alarm with two areas of confusion: first, the numbers the agency publicly reports for vaccine distribution, and second, a recently-launched program where the federal government sends vaccines directly to pharmacies.

The group said the issues with public reporting of vaccine distribution has been ongoing “since last year” – the days of the Trump administration and has created “unnecessary confusion.” State officials have said the publicly reported numbers of vaccines allocated by the federal government differed from what was actually on the ground in their states. Both numbers differ from the actual vaccines health care providers have administered into arms.

“If the federal government distributes independently of the states to these same entities without state coordination and consultation, redundancy and inefficiency may very well follow,” the governors wrote.

CNN has reached out the to the White House for a response.