Johnson & Johnson’s Covid-19 vaccine should not replace second dose of the Moderna or Pfizer vaccines except in “exceptional situations,” says the US Centers for Disease Control and Prevention.

“Any of the currently authorized Covid-19 vaccines can be used when indicated, ACIP does not see a product preference,” said Dr. Sarah Mbaeyi, CDC medical officer Tuesday during the CDC Clinician Outreach and Communication Activity call.

“However, the Covid-19 vaccines are not interchangeable, and the safety and efficacy of a mixed product series has not been evaluated,” she said. “We don’t want people to just start mixing and matching with whatever is easiest to get.”

If there are delays, the second dose can be administered up to six weeks after the first, according to updated CDC guidance, Mbaeyi said.

However, the CDC did say that in the rare circumstance a person is unable to receive their second Pfizer or Moderna dose, they can receive the Johnson & Johnson vaccine. But it must have been at least 28 days since receiving their first dose.

Mbaeyi added that it would be extremely unlikely that someone would be in this circumstance and people should not substitute the Johnson & Johnson vaccine if there’s “temporary unavailability of Pfizer or Moderna.”

The CDC is also recommending against fully vaccinated people signing up to receive the Johnson & Johnson vaccine.

“If somebody has completed a series, so they’ve gotten their Pfizer or Moderna series, they are considered vaccinated,” Mbaeyi said. “They do not need any additional Janssen vaccine to kind of boost their protection, and we’re recommending against that.”

The CDC clinical considerations will be updated to include Johnson & Johnson viral vector vaccine.

Continued testing is “critically important” in the fight against Covid-19, according to the US Centers for Disease Control and Prevention, especially as cases plateau and more contagious variants spread around the US.

However, Covid-19 testing in the US has dropped by a quarter since reaching a peak in mid-January, according to data from The COVID Tracking Project.

“Widespread testing must continue in order to defeat the pandemic,” Dr. Greta Massetti, lead for the CDC COVID-19 Emergency Response Community Interventions and Critical Populations Task Force, told CNN. “It will take many months for all Americans to have the opportunity to receive one of the vaccines available. In the meantime, it’s essential that people continue to take preventive measures.”

Daily Community Profile Reports from the White House Covid-19 team have been tracking various indicators including testing and color-code metrics based on transmission severity.

In terms of testing rates, a seven-day daily average of at least five tests for every 100 people is ideal. But in the latest report published Tuesday, only five states reached that threshold over the last seven days, landing them in the “dark green” category: Rhode Island, Vermont, Massachusetts, New York and Alaska.

Meanwhile, eight states were in the “red” or “dark red,” with less than one test for every 100 people: Oklahoma, Missouri, South Dakota, Mississippi, New Hampshire, Washington, California and Georgia.

The federal report notes that the number of tests “may be underestimated due to delayed reporting,” but nearly every state had a significant decline in testing rates compared to mid-January.

California has had one of the largest drops in testing since mid-January, federal data shows. According to the state health department, testing volume has decreased for the fifth straight week — down from a seven-day average of about 230,000 tests per day to about 181,000 tests per day. In conversations with testing laboratories, the state found that the decrease was driven by less frequent utilization of testing services, not by lack of supply or capacity.

In fact, national data from Quest Diagnostics shows that the lab processed about 4.3 million diagnostic Covid-19 tests in February, but had the capacity to process up to 7 million.

Overall, federal data shows that the median turnaround time for Covid-19 tests had dropped to one day in nearly every state. For about a dozen states, that’s an improvement from the two or three day turnaround times in mid-January.

California recently released guidance around testing for Covid-19 during the vaccine rollout, urging residents to continue to get tested even if they’ve been fully vaccinated.

“If your job requires it, you still need to get tested regularly, even if you’ve had the vaccine,” the state’s Covid-19 website states.

Brazil had its highest number of Covid-19 deaths in a single day on Tuesday, according to data from the country’s health ministry.

The country saw at least 1,641 new Covid-19 deaths in the last 24 hours, topping last week’s previous record of about 1,541 coronavirus-related deaths in a single-day. The country’s total number of confirmed deaths stands at about 257,361, according to the country’s health ministry.

Brazil is the second-highest country with the most Covid-19 deaths worldwide, after the United States, Johns Hopkins University data shows.

Amid the crippling figures and an alarming lack of Covid-19 vaccines, Brazilian Vice President Hamilton Mourão defended the government’s position against a national lockdown to help curve the spread of the deadly virus, saying the country is “not a dictatorship” and that the best way to fight the pandemic is to accelerate the vaccination roll out – which according to Mourão is “going well.”

Brazil has vaccinated a little over 3% of its population, according to Oswaldo Cruz Foundation (Fiocruz), a Brazilian Ministry of Health research institution. More than 80% of intensive care units are filled in 19 states, the foundation reported.

“The Texas State Teachers Association urges the governor to keep his mask mandate in place, especially in our public schools, and see that it is enforced,“ the statement said.

“Gov. Abbott needs to quit obeying his political impulses and listen to the health experts, who are warning that it is too soon to let our guard down without risking potentially disastrous consequences,” the statement said. “The experts caution us to continue the safety practices that have worked against this disease, including widespread mask use and social distancing.”

Molina also called on the governor to give teachers and other school employees priority for Covid-19 vaccination.

“Texans want to see all their public schools reopened, but they want to see them reopened safely. That includes continued safety practices, including mask use, and vaccines for educators,” Molina said.

The Occupational Safety and Health Administration (OSHA) has conducted fewer workplace inspections despite a surge in complaints since the start of the coronavirus pandemic, according to a new report from the Department of Labor Inspector General’s office.

The OIG studied the period from Feb. 1 through Oct. 26, 2020 and found OSHA under the Trump administration received 15% more complaints but performed 50% fewer inspections compared to a similar period in 2019.

“Due to the increase in complaints, reduction in inspections, and most inspections not being conducted onsite, there is an increased risk that OSHA has not been providing the level of protection that workers need at various job sites,” the report noted.

The OIG further cautioned that since most of OSHA’s onsite inspections were conducted remotely, “hazards may go unidentified and unabated longer, with employees being more vulnerable to hazardous risk exposure while working.”

OSHA did not track if inspections were conducted onsite or remotely in its data system, according to the report, which stressed the importance of tracking remote inspections “to determine their frequency and timeliness for identifying and ensuring abatement of worksite hazards.”

The OIG said that OSHA has concurred with the report’s recommendations, which included prioritizing high risk employees for Covid-related onsite inspections, retroactively tracking remote inspections to Feb. 1 and going forward, analyzing remote and onsite inspections, and evaluating whether stronger standards are needed to help control the spread of the coronavirus as workers return onsite.

A memo from Department of Labor Deputy Assistant Secretary Amanda Edens, which is part of the OIG report, says OSHA “takes seriously the input and recommendations found in the report.” 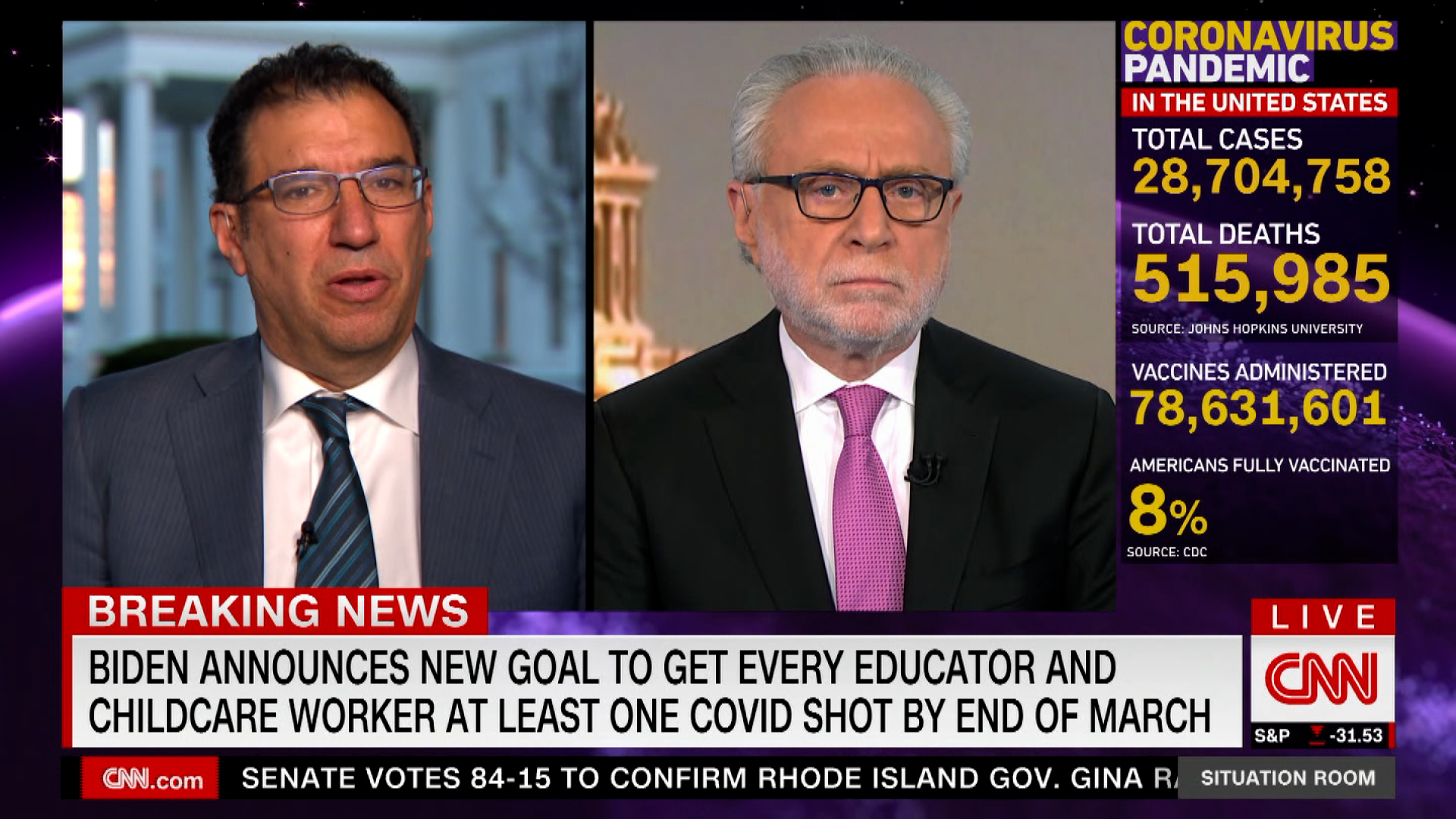 Senior adviser to the White House Covid-19 response team Andy Slavitt said that the White House thinks “it’s a mistake” to relax Covid-19 restrictions too early and called on Texas Gov. Greg Abbott to rethink his decision to lift the state’s mask mandate and let businesses open at full capacity.

“We certainly understand the pressure governors are under and we appreciate the working relationship we have with Gov. Abbott, as you know the President was just down there, but at the same time, we think it's a mistake to lift these mandates too early. Masks are saving a lot of lives,” Slavitt told CNN on Tuesday.

"I’m really hoping that the businesses and the community and people in Texas, the mayors, the counties will rethink this. I hope the governor rethinks this,” Slavitt added. “Hopefully states will stick with this until such a time as we get through all the vaccinations and see the other side of this.”

Slavitt said he would not get ahead of the scientists on guidance for people who have been fully vaccinated. CNN previously reported that the US Centers for Disease Control and Prevention will release that guidance when it is finalized later this week.

Here are some reactions from mayors so far:

The National Institutes of Health announced on Tuesday the launch of new research effort to better understand how Covid-19 affects children.

The effort will focus much of the research on what children are at risk for multisystem inflammatory syndrome in children (MIS-C) and how this severe illness can be treated.

“Based on our current data, most children with SARS-CoV-2 infection do not develop serious illness,” the NIH said in a statement on Tuesday. “However, those who do go on to develop MIS-C can experience prolonged fever and severe abdominal pain that may progress to shock. Although most children with MIS-C survive, its cause and long-term effects remain largely unknown.”

“This effort stems from NIH’s commitment to understanding the spectrum of risk that SARS-CoV-2 poses for children and to identifying interventions to improve their short- and long-term health outcomes,” said Diana Bianchi, NICHD director and co-chair for CARING for Children with COVID.

The UK government’s Coronavirus Job Retention Scheme (CJRS) — or furlough scheme — will be extended until the end of September, the British Treasury announced Tuesday, providing support for millions of workers across the country during the pandemic.

“Our Covid support schemes have been a lifeline to millions, protecting jobs and incomes across the UK,” Chancellor of the Exchequer Rishi Sunak said in a statement.

“There’s now light at the end of the tunnel with a roadmap for reopening, so it’s only right that we continue to help business and individuals through the challenging months ahead – and beyond,” he added.

The chancellor is expected to outline further details around the extension of the furlough scheme on Wednesday, and is set to announce further benefits for self-employed workers.

According to the Treasury, employees will continue to receive 80% of their salary for hours not worked until the scheme ends.

“As restrictions are eased and the economy begins to reopen, businesses will be asked to contribute alongside the taxpayer to the cost of paying their employees for hours not worked,” the Treasury said in a statement.

“The government will ask for a small contribution of just 10% in July and 20% in August and September towards the hours their staff do not work,” the statement added.