The Netherlands government has asked the Health Council of the Netherlands for advice on administering the AstraZeneca vaccine for Covid-19 to those over age 65.

That vaccine is currently only being used in the Netherlands for those aged 60 to 64, those with Down’s Syndrome, and the “morbidly obese.”

The government has asked the Health Council, an independent scientific advisory body, “to issue an opinion on use of AstraZeneca for those over 65 years old,” Tim Bennebroek, a spokesperson for the Dutch Ministry of Health, Wellness, and Sport told CNN on Wednesday.

An ensemble forecast published Wednesday by the US Centers for Disease Control and Prevention now projects there will be 540,000 to 564,000 coronavirus deaths in the United States by March 27.

The previous ensemble forecast, published Feb. 24, projected up to 548,000 coronavirus deaths by March 20.

At least 516,616 people have died from Covid-19 in the United States, according to data compiled by Johns Hopkins University.

But Varon “saw all those 348 days yesterday go down the drain” after Texas Gov. Greg Abbott announced the lifting of mask mandates and opening businesses 100% capacity.

Varon said he is very concerned and has met with staff at his hospital to go through different strategies and getting more personal protective equipment.

“If we open the state on the 10th, I'm telling you, before the end of March, we're going to have problems. And we had a precedent for that. Remember last year when we opened the state at the end of April. My worst months were June and July last year. So unfortunately, this is starting to look like deja vu,” Varon said on CNN’s “New Day.”

Varon said Abbott’s decision makes no sense and that many Texans may stop wearing their masks.

As of Monday, 6.57% of Texans have been fully vaccinated, according to Johns Hopkins University.

“Despite being a huge state, we have less than 7% of vaccination. I don't know why he didn't wait until we have more percentage of the population vaccinated before he came with this move,” Varon said.

Clay Jenkins, Dallas County judge, calls this “a political move on the part of the governor to take the attention off the power grid collapse” after devastating winter storms.

“I wish he was more imaginative and had a better way to change the conversation than doing something dumb like this,” Jenkins said.

Jenkins added that stores can still refuse service to people who don't wear a mask, and “I think most stores will.”

“No one celebrates victory in the third quarter. And so, as we have the introduction of another vaccine and as we…ramp up opportunities to have more Americans vaccinated, it makes no sense that we're choosing to sabotage our efforts and put people and lives and businesses in jeopardy,” Lumumba said to CNN’s Alisyn Camerota.

Lumumba said Gov. Tate Reeves is sending a contradictory message against health experts and that too many people won’t follow local mask mandates.

“He puts Jackson in an extremely dangerous position, because we're not only the capital of the state of Mississippi; we’re the capital of health care,” Lumumba said.

Lumumba said Jackson will continue its mask mandate until health officials say it is safe to lift it.

“That is an effort not only to protect lives, protect families, but to protect businesses, as well,” he said.

Peru will receive a batch of 50,000 doses of the Pfizer/BioNTech Covid-19 vaccine on Wednesday evening, President Francisco Sagasti has announced.

The vaccines are expected to arrive on a flight landing around 7 p.m.. “We expect to receive similar amounts every week from now on,” he added Tuesday.

Peru’s government has secured 48 million doses to be delivered between now and the end of the year, Sagasti said.

“There are few vaccines for the huge demand we have around the world. The [different] laboratories are negotiating directly with governments during this first stage when there is a global shortage of vaccines” Sagasti told journalists, referring to calls for local authorities and representatives of the private sector to be allowed to negotiate directly with vaccine producers.

The Pfizer/BioNTech vaccine is the second to arrive in the country, after Peru secured 20 million doses.

Peru started its vaccination rollout at the beginning of February with one million Sinopharm doses and expects another two million doses of the same vaccine during March.

The country also expects to receive 1,296,000 Oxford/AstraZeneca doses and 117,000 Pfizer doses through the Covax program between March and May this year.

Around 300,000 health workers have been vaccinated so far with the doses provided by Sinopharm. Peru was the first country to roll out China’s Sinopharm after participating in the clinical trials.

The country has been reporting an average of more than 6,000 new daily cases since the beginning of February and has faced a shortage of oxygen, hospital beds and ICU units during this second wave of the pandemic.

A global fake Covid-19 distribution network has been dismantled in South Africa and China and “hundreds of illicit vaccines seized with arrests made across two continents,” says Interpol, which represents 194 international police forces.

In a statement published Wednesday, Interpol said that in South Africa, “some 400 ampoules -- equivalent to around 2,400 doses -- containing the fake vaccine were found at a warehouse in Germiston, Gauteng."

In China, “police successfully identified a network selling counterfeit Covid-19 vaccines, raided the manufacturing premises, resulting in the arrest of some 80 suspects, and seized more than 3,000 fake vaccines on the scene," the agency said.

"Whilst we welcome this result, this is only the tip of the iceberg when it comes to Covid-19 vaccine related crime,” said Interpol Secretary General Jürgen Stock.

A spokesperson for the Chinese Ministry of Public Security remarked that "the Chinese government attaches great importance to vaccine security" and will continue to "further strengthen the constructive cooperation with Interpol" to crack down on illegal vaccine crimes, according to the Interpol statement.

Interpol said it was also dealing with “additional reports of fake vaccine distribution and scam attempts targeting health bodies, such as nursing homes.”

The agency has warned the public “that no approved vaccines are currently available for sale online. Any vaccine being advertised on websites or the dark web, will not be legitimate, will not have been tested and may be dangerous.”

Anyone who purchases these fake vaccines is “putting themselves at risk and giving their money to organized criminals,” the statement concluded.

Israel will partially re-open its skies for citizens to leave and enter after an unprecedented closure which has lasted nearly six weeks.This will allow a greater number of Israelis to return to the country in time to vote in the general election on March 23.

All passengers will still be required to undergo tests before and after arriving. Those who cannot prove they have been vaccinated or have recovered from Covid-19 will be required to either enter home quarantine wearing a new electronic tracking bracelet, or stay in state-run quarantine hotels.

Thousands of Israelis said they were stranded abroad or stuck in Israel after the government imposed a near total ban on entries and exits.

An exceptions committee, which was convened to hand out limited special permissions to enter or exit the country, has come under harsh scrutiny and accusations of mismanagement.

The government has also faced lawsuits, which claim the border closures would impede on Israeli citizens’ right to vote.

Rwanda has received its first shipment of Covid-19 vaccines through the COVAX initiative, the country's Health Ministry tweeted Wednesday.

"The first batch of 240,000 doses of the AstraZeneca-Oxford vaccine arrived in Kigali on Wednesday morning. A second shipment of 102,960 doses of the Pfizer vaccine, also from the COVAX facility, is expected to arrive on Wednesday afternoon," the ministry said in a statement.

Administration of the doses will begin on Friday, it added.

Both vaccines will be used to vaccinate a total of 171,480 people identified as priority risk groups, including health personnel, those aged over-65 year olds or with underlying health conditions, and other frontline workers, the statement said.

Kenya and Nigeria received Covid-19 vaccines on Tuesday as part of the global COVAX program.

The vaccine scheme's mission is to buy coronavirus vaccines in bulk and send them to poorer nations that can't compete with wealthy countries in securing contracts with the major drug companies.

US President Joe Biden is barreling into his first science-vs.-politics showdown with powerful Southern Republican governors, one that could define the outcome of the race to vaccinate enough Americans before variants take hold.

Biden on Tuesday warned the country to dig in for a while longer as he flexed sweeping wartime powers under the Defense Production Act in another big leap forward in the inoculation drive, announcing there would be enough doses for all US adults by the end of May. He unveiled a pioneering plan for pharmaceutical giant Merck to make a vaccine developed by its rival Johnson & Johnson.

"There is light at the end of the tunnel, but we cannot let our guard down now to ensure victory is inevitable; we can't assume that. We must remain vigilant, act fast and aggressively and look out for one another," the President said.

But the governors of Texas and Mississippi defied federal government warnings to not relax restrictions and open their economies too fast, going it alone as new infections plateau at high levels and fears grow over a huge spike in the coming weeks. On Monday, Dr. Rochelle Walensky, the director of the Centers for Disease Control and Prevention, had warned that with variants spreading, "we stand to completely lose the hard-earned ground we have gained." 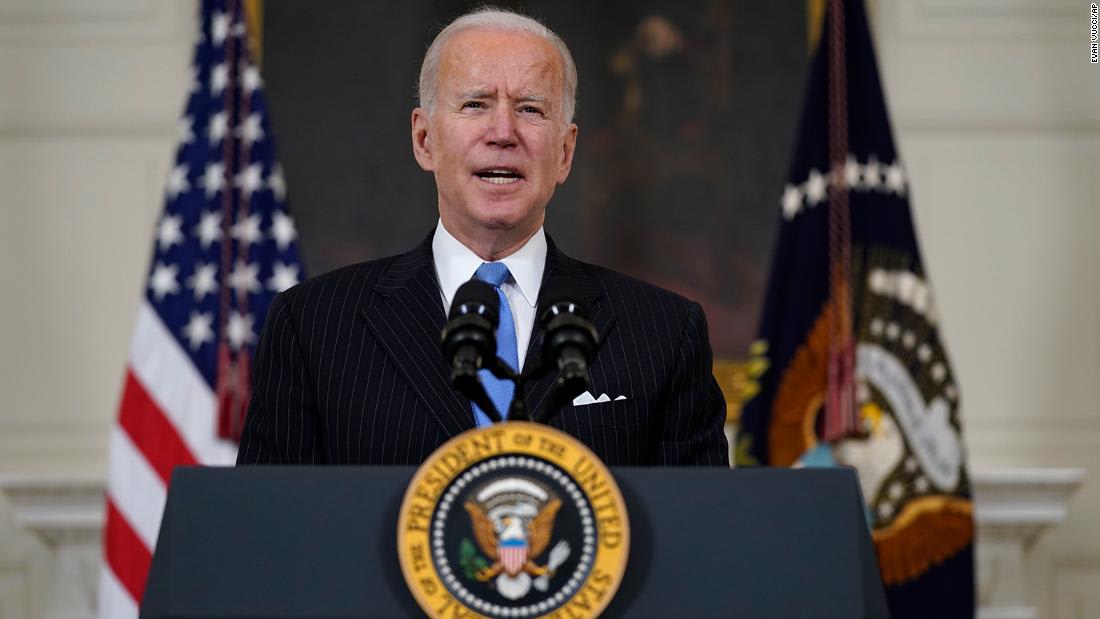