Dr. Anthony Fauci, director of the National Institute of Allergy and Infectious Diseases, said on CNN’s New Day Wednesday that there are two ways of going about booster shots for Covid-19 vaccines against variants: boosting against the regular virus or boosting against specific variants.

The vaccines in use now seem to be working against the variants, Fauci explained.

He said that people need to continue to be careful and not overly optimistic, “but I think what we’re seeing is that boosting with just the wild type virus vaccine – wild type means the standard one, not a variant – can actually protect you against a variant.”

The coronavirus variant B.1.1.7, which was first identified in the United Kingdom, is associated with an estimated 64% higher risk of dying from Covid-19, suggests new research published in a peer-reviewed journal.

A sample of people in the UK infected with the variant appeared to be between 32% and 104% — so around a probable 64% — more likely to die than those infected with the previously circulating variants, according to the study published in the medical journal the BMJ on Wednesday.

The variant was originally found to be more easily transmissible and the new data support claims from UK officials, based on preliminary data, that the variant may be more deadly, as well.

The researchers, from various institutions in the UK, analyzed data on more than 100,000 patients who tested positive for Covid-19 between October through January, and were followed up with until mid-February. The researchers took a close look at whose tests detected the variant compared with those from previously circulating variants.

The study showed that the new variant was associated with 227 deaths in a sample of 54,906 patients — compared with 141 deaths among the same number of patients infected with previous strains.

"In the community, death from COVID-19 is still a rare event, but the B.1.1.7 variant raises the risk. Coupled with its ability to spread rapidly this makes B.1.1.7 a threat that should be taken seriously," Robert Challen, lead author of the study from the University of Exeter in the UK, said in a news release on Wednesday.

More research is needed to determine whether similar findings would emerge among more patients from other parts of the world.

"The variant of concern, in addition to being more transmissible, seems to be more lethal," the researchers wrote in their study. "We expect this to be associated with changes in its phenotypic properties because of multiple genetic mutations, and we see no reason why this finding would be specific to the UK."

Dr. Anthony Fauci, America's top infectious diseases expert in the US, has been reflecting on the year since the coronavirus pandemic began, saying he never could have imagined reaching the number of cases and deaths the country has seen from the virus.

“If you had turned the clock back a year … even though I've been through multiple outbreaks of different diseases, the thought that you would have 525,000 people in America to have died and about, you know, 28 million infections in this country, would have really been unimaginable,” he told CNN's New Day program on Wednesday.

Fauci also indicated that things are headed in the right direction — but warned that “we’re not out of the woods yet.”

“Although everyone wants to get back to normal now (it's totally understandable, including myself and my family) -- but the fact is, when you look at this virus and what it's done, you've got to be very careful and pull back in a very measured way, and not just turn the switch on and off,” he said.

Fauci also said people should keep their guard up a little longer, through the upcoming spring break.

“We want people to have a good time on spring break, but don't put your guard down completely. Just be prudent a bit longer. We are going in the right direction, we are almost there.”

US National Institute of Allergy and Infectious Diseases Director Dr. Anthony Fauci said the next round of guidance for vaccinated individuals will involve traveling and going out.

New guidelines from the US Centers for Disease Control and Prevention released this week say people fully vaccinated against Covid-19 can safely visit with other vaccinated people and small groups of unvaccinated people in some circumstances, but there are still important safety precautions needed.

“When you start doing things like completely putting aside all public health measures, as if you're turning a light switch off, that's quite risky. We don't want to see another surge, and that's inviting one when you do that,” he said.

Fauci added that he is constantly and consistently meeting with the Biden administration’s team. While personal threats to him “come and go,” he told CNN’s John Berman that the situation right now is “really going well.”

“It's a completely different kind of atmosphere. It's always looking ahead, about how we can do better with the main focus on the public health aspects of it, without distractions about the other things that we knew from before,” he said.

Watch more from the interview:

There is little evidence that Britain’s Covid-19 track and trace program has had any impact on containing the virus, despite a price tag of US $51.5b, according to the government's public spending watchdog.

The NHS Test and Trace program was introduced in the UK during the first wave of the pandemic to stop its spread and avoid another lockdown. But two lockdowns later, it is “unclear” if its specific contribution to containment has justified its hefty price tag, according to a report, published on Wednesday by the UK Public Accounts Committee.

Yet despite the unimaginable resources thrown at this project, Test and Trace cannot point to a measurable difference to the progress of the pandemic, and the promise on which this huge expense was justified - avoiding another lockdown – has been broken, twice," said Meg Hillier, Chair of the Public Accounts Committee.

The program never met its target of turning around test results within 24 hours, nor was prepared for a surge in demand for tests, the report said.

Errant spending, being overly reliant on expensive contractors and a lack of coordination with local authorities are among some of the program's key criticisms detailed in the report.

Speaking on UK broadcaster Sky News on Wednesday, UK Transport Secretary Grant Shapps said that although the cost of fighting coronavirus hasn’t been cheap, it has “absolutely been necessary.”

“Whatever the coronavirus experience we have had as a nation, good or bad, it would have been one heck of a lot worse if we didn't have a Test and Trace system which has contacted so many people and prevented the disease spreading further," Shapps said.

South Korea will provide priority coronavirus vaccination for Olympic athletes before their travel to Japan for the Tokyo Olympics, the Korean Sport and Olympic Committee confirmed to CNN on Wednesday.

The country began its vaccination rollout in late February. For now, the coronavirus vaccines are available to frontline healthcare workers and those working and staying in nursing facilities. The general public will only receive the vaccine in July according to South Korea’s Disease Control and Prevention Agency (KDCA).

KDCA is making an exception for Olympic athletes as they are due to travel to Japan for “public service”.

It also confirmed that it will allow Covid-19 vaccination for short-term travellers on essential governmental or business travel abroad.

However, details including administration date and number of recipients have not been decided yet. Though KDCA did announce that essential governmental and economic workers can start applying on March 17.

The KDCA and relevant ministries will review the applications, according to Senior Health official Yoon Tae-ho.

The Tokyo Olympics, postponed by a year because of the pandemic, are scheduled for July 23 to August 8.

A spokesperson from the RDIF said they had brokered deals with production facilities in Italy, Spain, France and Germany to manufacture Sputnik V.

The Russian sovereign wealth fund had struck a deal with Swiss-Italian company Adienne to produce Sputnik V in Italy, the spokesperson said.

The Italian-Russian Chamber of Commerce released a statement on Monday welcoming the deal, which would see Italy becoming the first EU country to produce the Russian vaccine.

They statement added that production could start as early as July 2021, and will create new jobs and allow Italy to control the entire production process. The partnership could see production of 10 million doses by the end of the year, the Italian-Russian Chamber of Commerce said.

"Sputnik V is approved by 46 nations,” the developers added.

The European Union has backed down from accusing the UK of vaccine nationalism in an ongoing dispute over supply of Covid-19 shots.

On Tuesday, President of the European Council Charles Michel wrote in a newsletter that the UK had “imposed an outright ban on the export of vaccines or vaccine components” produced in the country.

UK Prime Minister Boris Johnson pushed back on those claims, saying that the UK has not blocked export of any vaccines to the European Union.

"I therefore wish to correct the suggestion from the European Council President, that the UK has blocked vaccine exports. And let me be clear we have not blocked the export of a single COVID-19 vaccine, or vaccine components. This pandemic has put us all on the same side in the battle for global health. We oppose vaccine nationalism in all its forms. “

The accusations had first prompted British Foreign Secretary Dominic Raab to reject the “false claims” in a letter of response to Michel on Tuesday, a source told CNN.

"I wanted to set the record straight. The UK government has not blocked the export of a single COVID-19 vaccine or vaccine components,” Raab wrote, according to the source, who has seen the letter.

In a conciliatory tweet on Tuesday evening, Michel said that he is “glad if the UK reaction leads to more transparency and increased exports to EU and third countries.”

However, he added that there are “different ways of imposing bans or restrictions on vaccines/medicines.”

A representative of the EU’s delegation to the UK has been summoned to the British Foreign, Commonwealth and Development Office to discuss the issue further because the “false claim has been repeated at various levels within the EU and the Commission,” the source also said. 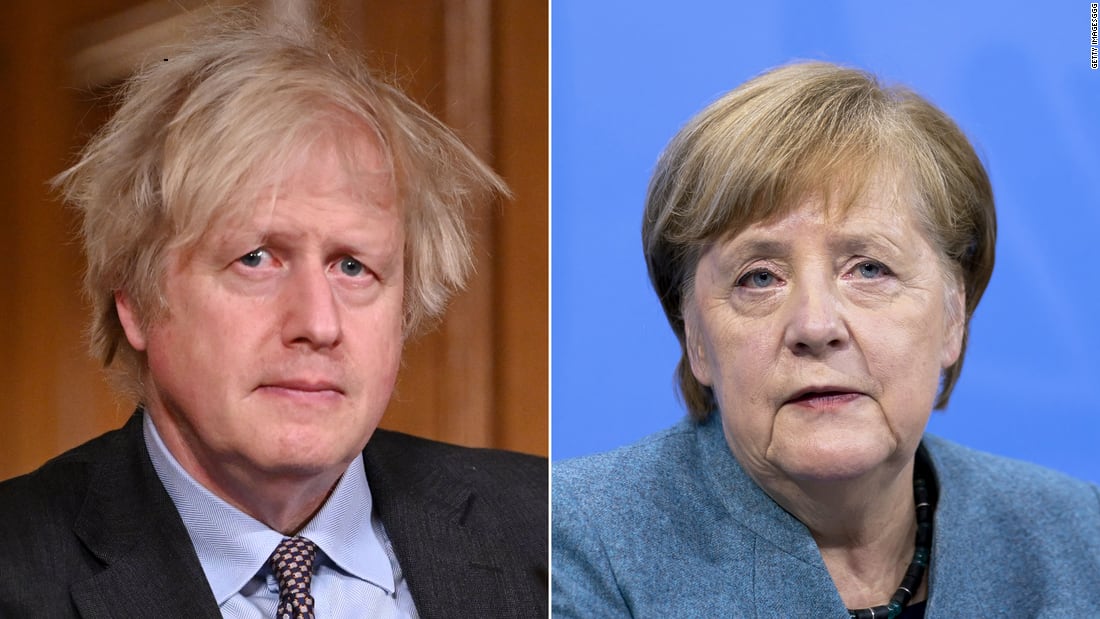 Boris Johnson's vaccine strategy gets another boost, while Europe's scramble for shots continues

Nashville Mayor John Cooper is planning on vaccinating 10,000 Nashville residents in a drive-thru mass vaccination event scheduled for March 20 at Nissan Stadium, according to tweet by the Mayor and the Metro Public Health Department in Nashville.

“Nashville Health plans on vaccinating 10,000 of our residents to move our city closer to herd immunity and a return to normal life,” Cooper said in the tweet.

On Tuesday Nashville Health reported 90,984 confirmed and probable cases of coronavirus disease (COVID-19) in Nashville/Davidson County, noting an increase of 53 in the past 24 hours. The health agency reports that to-date, 652 deaths have been attributed to Covid-19.

Tennessee is currently in Phase 1C of its Vaccine Distribution Plan, which means that Tennesseans 16 years old or older with high-risk health conditions have been eligible to be vaccinated as of Monday.

Note: These numbers were released by the state’s public health agency and may not line up exactly in real time with CNN’s database drawn from Johns Hopkins University, The Covid Tracking Project and the US Centers for Disease Control and Prevention.