Oklahoma Gov. Kevin Stitt announced Thursday that the state will have no restrictions on events and no longer require face masks in state buildings.

"As long as I'm governor, I will protect the freedoms of Oklahomans," he said.

Coronavirus deaths in the United Kingdom topped 125,000 Thursday, with the government recording 181 new deaths within 28 days of a positive test.

It becomes the fifth country to reach that number of Covid-19 deaths, and the smallest of the group, according to Johns Hopkins University data.

On Jan. 26, the UK became the fifth country in the world to reach 100,000 deaths following the United States, Brazil, India and Mexico, according to JHU data.

Here is a look at how the UK's figures compare to other countries: 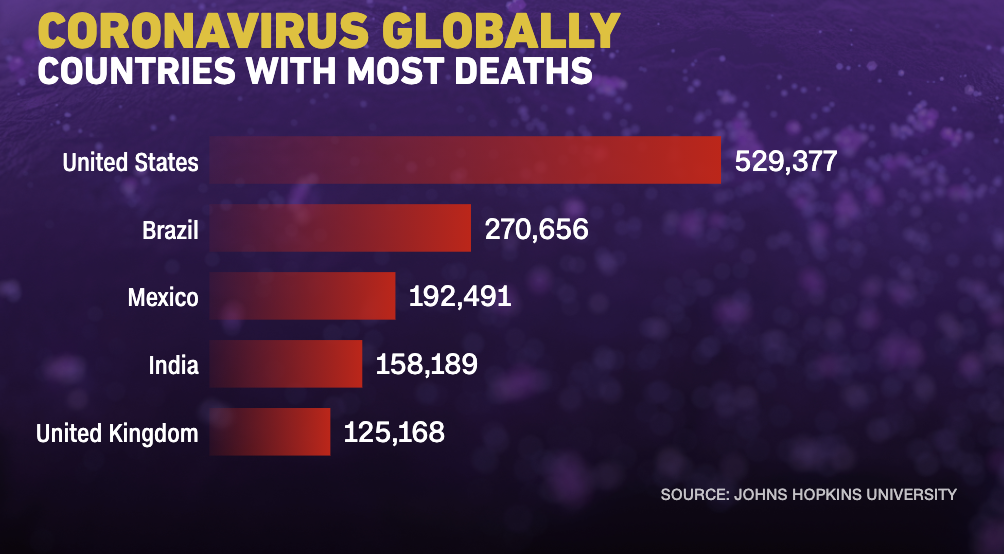 Jordan's health ministry reported 8,300 new cases of coronavirus Thursday, which is the highest number since the pandemic began. It also reported 63 new deaths.

Most of the new cases were reported in the capital, Amman.

On Wednesday, Jordan announced new restrictions that will go into effect starting Saturday until March 31. They include suspension of Friday prayers at mosques and Sunday mass at churches. Nightclubs, bars, indoor swimming pools, gyms, sports clubs and parks will be closed until the end of March.

As we mark the one-year anniversary of the World Health Organization calling the coronavirus outbreak a pandemic – and ahead of President Joe Biden’s first prime-time address tonight – here is a look at the current state of the Covid-19 pandemic through the latest trends and metrics of Covid data, as well as comparisons to the peak of the pandemic.

There have been over 29 million total cases, per data from JHU, this is about 9% of the total US Population.

The US is averaging 56,240 new cases per day over the past seven days. This is the lowest that metric has been since mid-October.

The US is averaging 1,437 deaths per day over the past seven days. This the lowest that metric has been since Nov. 19.

The US is currently under 43,000 hospitalizations from Covid, according to data from the Department of Health and Human Services.

The US positivity rate is currently 4.2%, per data from HHS. It dropped under 5% at the end of February.

The European Commission approved the Johnson & Johnson coronavirus vaccine on Thursday, the fourth licensed vaccine to be authorized in the European Union.

The approval follows the European Medicines Agency (EMA) – the EU’s medicines regulator – authorization for the single dose vaccine “after a thorough evaluation” of Johnson & Johnson’s data found it met the criteria for efficacy, safety and quality.

"The Janssen vaccine is the fourth authorized vaccine of the EU's portfolio and will help us enhance the vaccination campaign in the second quarter of 2021,” the President of the European Commission, Ursula von der Leyen, said, referring to the vaccine by the name of Johnson & Johnson’s vaccines division.
“It only requires a single dose, which takes us another step closer to achieving our collective goal of vaccinating 70% of the adult population by the end of summer," von der Leyen said in a statement.

Its approval offers a boost for the EU’s vaccination rollout that has been criticized as going at a slow pace, hit by supply problems and delays.

The statement added the Commission has approved the contract with the conditional market authorization that J&J deliver 200 million of their single dose Covid-19 vaccines to the EU starting in the second quarter of 2021.

The Iraqi Ministry of Health reported at least 5,170 new confirmed coronavirus cases on Thursday, bringing the total number of cases in Iraq to 745,462.

The health ministry also reported 26 Covid-19 related deaths, bringing the total number of reported deaths in Iraq to 13,671 since the pandemic began.

There are currently 57,626 Covid-19 patients hospitalized across the county, among them 426 cases are in the Intensive Care Unit.

On Monday, the Iraqi health ministry extended a series of restrictive measures announced last month for two more weeks "in light of the increasing number of infections among citizens," to contain the spread of coronavirus.

The measures include a full curfew on Fridays, Saturdays, and Sundays between March 9 through March 22.

Many of the people who got a single dose of the Johnson & Johnson Covid-19 vaccine in an early clinical trial developed neutralizing antibodies against the virus by about day eight, and by day 57, all of the volunteers had, according to a study published Thursday in the Journal of the American Medical Association.

The US Food and Drug Administration authorized the Johnson & Johnson’s single-dose Covid-19 vaccine in February. This is one of the first peer-reviewed studies to show how the single dose of the J&J vaccine worked in humans – and it worked well.

The company released data throughout the trial process. In January, J&J also published interim results of a larger part of the vaccine trial in the New England Journal of Medicine. That study showed the vaccine was safe and generated an immune response.

For this part of the early stage trial, the Beth Israel Deaconess Medical Center in Boston recruited 25 adult volunteers who were randomized into five different groups. One group got a single shot, another got two. In those two groups, scientists tried two different vaccine doses. Another group got a placebo.

Scientists checked the volunteers’ antibody levels throughout the trial. For the purpose of this study, they reported the total results after 71 days. The company will follow up with these volunteers for two years.

A note on the study: The study had its limitations. It’s small and the elderly were not included, so it can’t necessarily be generalized to other age groups. Researchers say they will follow up with these volunteers to see exactly how long this protection may last.

J&J is currently working on several other Covid-19 vaccine clinical trials, including to determine whether a second dose works better. It is also studying how its vaccine works in children and will study how it works in pregnant women.

The European Medicines Agency said Thursday that the benefits of the AstraZeneca Covid-19 vaccine outweigh the risks, and did not recommend suspending use.

The EMA said it was aware that Denmark was suspending it due to reports of blood clots in people who had received it, but said: “There is currently no indication that vaccination has caused these conditions, which are not listed as side effects with this vaccine.”

The agency said “the vaccine’s benefits continue to outweigh its risks and the vaccine can continue to be administered while investigation of cases of thromboembolic events is ongoing.”

And it said the number of blood clots seen in vaccine recipients was no higher than the rate among people had not received it in Europe. Full EMA statement here.

What this is about: Denmark, Iceland and Norway have suspended the use of the Oxford-AstraZeneca Covid-19 vaccine while the European Union's medicines regulator investigates whether the shot could be linked to a number of reports of blood clots.

Read more about the European countries who've decided to suspend use of the AstraZeneca vaccine: 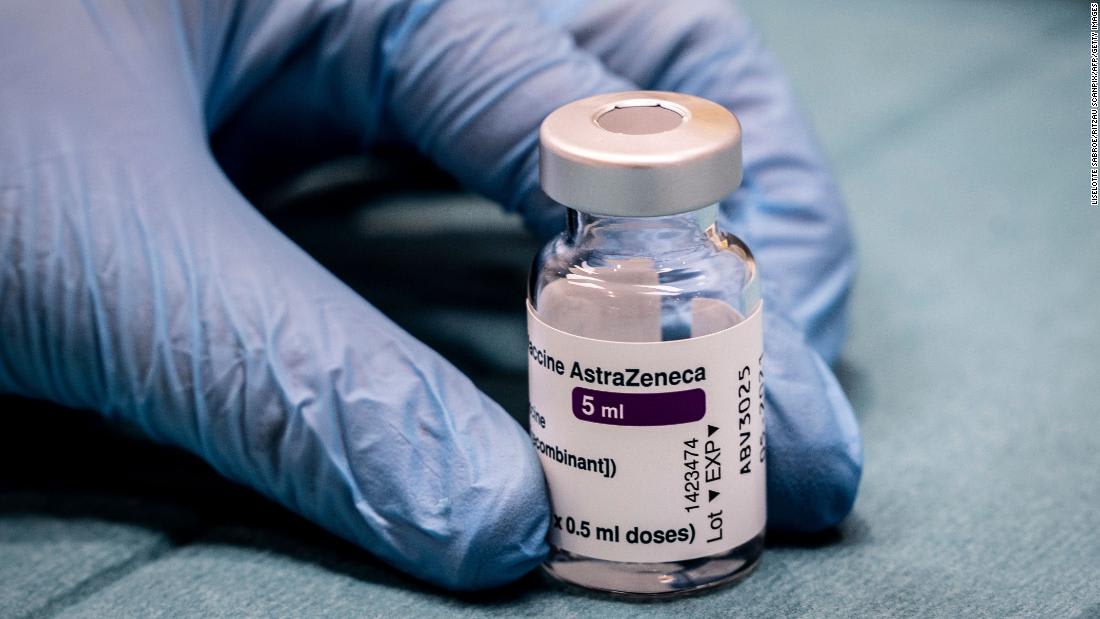 Denmark suspends use of AstraZeneca vaccine as 'precautionary measure'

A new coronavirus variant linked to travel from Antigua, and first identified in the UK, is being investigated by Public Health England (PHE), the agency said Thursday.

The PHE statement said the variant B.1.324.1 was designated as "under investigation" on March 4 after two cases were found in the South East of England who had recently travelled to Antigua, but is not being categorized as concerning for now.

“The variant contains the spike mutations E484K and N501Y, both usually associated with Variants of Concern (VOC), however it does not feature specific deletions that would lead to a designation as a VOC,” the statement said.

PHE added that contact tracing teams have completed thorough investigations to identify and follow up any close contacts and no additional cases have been found to date.