AstraZeneca has defended its Covid-19 vaccine after several countries suspended its use over blood clot concerns this week.

The pharmaceutical giant said Friday that its analysis not only showed “no evidence of an increased risk” of blood clots in Oxford-AstraZeneca vaccine recipients, but a lower number than in the general population.

“An analysis of our safety data of more than 10 million records has shown no evidence of an increased risk of pulmonary embolism or deep vein thrombosis in any defined age group, gender, batch or in any particular country with COVID-19 Vaccine AstraZeneca,” it said in a statement.
“In fact, the observed number of these types of events are significantly lower in those vaccinated than would be expected among the general population."

Thailand on Friday followed Denmark, Iceland and Norway in suspending the use of the Oxford-AstraZeneca vaccine while investigators probe potential side effects and adverse reactions.

AstraZeneca said it will fully support any ongoing investigations.

US President Joe Biden has pinned America’s hopes of a return to normal on two key dates: May 1, by when he wants all adults to be eligible to get vaccines; and July 4, when he said Americans may be able to celebrate Independence Day in person.

In his first prime-time TV address last night, Biden escalated the nation’s "war footing" to help beat the virus. He announced that he was directing all states, tribes and territories to make all adults eligible to be vaccinated by May 1, stating his administration would build out the infrastructure of clinics, vaccine doses and medical staff to make that prospect real.

But the President also asked the American people to do their part.

"I will not relent until we beat this virus. But I need you, the American people ... I need every American to do their part," Biden said. "I need you to get vaccinated when it's your turn and when you can find an opportunity. And to help your family, your friends, your neighbors get vaccinated as well."

Biden sounded optimistic about the progress of the vaccination rollout. He moved his target for getting 100 million shots in peoples' arms from his first 100 days in the White House to his 60th day in office, saying the US will maintain and beat its current pace of 2 million shots per day.

According to the US Centers for Disease Control and Prevention (CDC), at least 33.9 million Americans are now fully vaccinated.

If everyone does their bit, Biden said, "By July the Fourth, there's a good chance you, your family and friends will be able to get together in your backyard or your neighborhood and have a cookout and a barbecue and celebrate Independence Day."

But this message of unity couldn’t be further away from the battles over safety measures emerging all over the country. In Texas, State Attorney General Ken Paxton is now suing leaders in Austin for maintaining local mask requirements, saying they illegally defy the governor's order ending a statewide mandate.

Paxton's lawsuit sets the stage for the latest showdown in a long-running, nationwide clash over public health rules that often breaks along political lines. Sixteen states have no statewide mask rule and there are growing divisions between local and state leaders on what public health measures should stay in place.

Experts are clear on the issue: daily case numbers in the US remain high and -- as Biden’s chief medical adviser on Covid-19 Dr. Anthony Fauci put it to CBS last night -- are "absolutely not" low enough to relax public health measures. 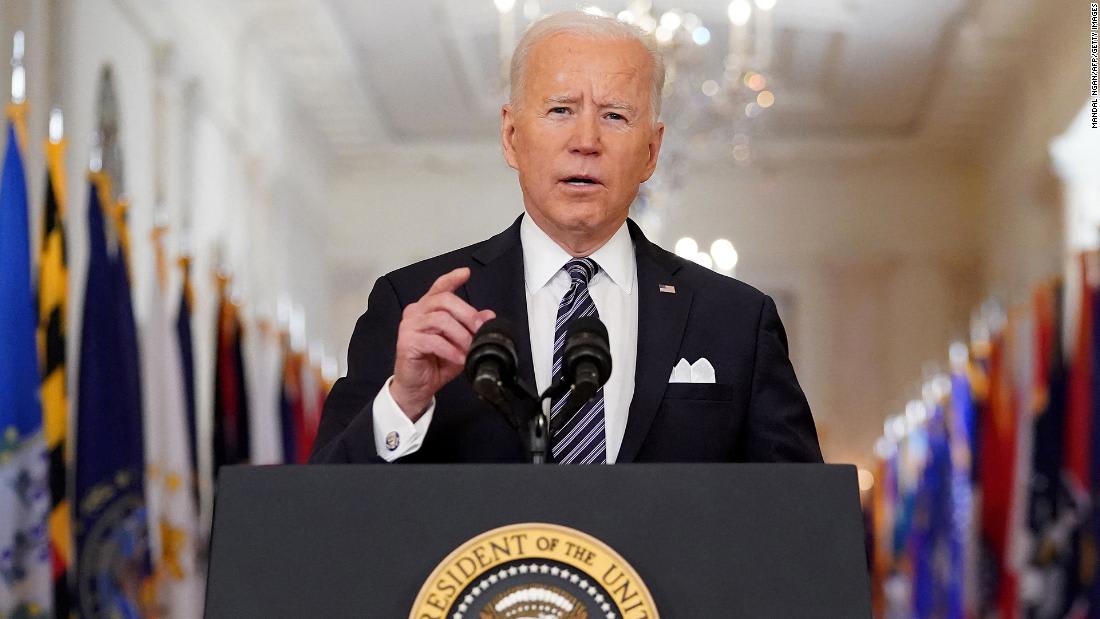 Italy is set to impose a nationwide coronavirus lockdown over Easter weekend, putting all of Italy’s regions in the “red zone,” according to a draft government decree that aims to tackle a recent surge in cases.

A Health Ministry spokesperson told CNN that the draft decree, expected to be approved by the cabinet Friday, would announce an Easter lockdown for April 3-5.

The decree, which goes into effect Monday, will include more country-wide restrictions, including limiting movement between towns.

The cabinet meeting comes a day after the country recorded the largest number of new coronavirus cases in more than three months, with its epidemiological curve rapidly rising.

Italy’s R rate is now at 1.6 with coronavirus variants increasing the spread of the virus.

In a small nursing home by the southern English seaside, David Alexander, 89, walks into his wife's bedroom for the first time since October.

Before even putting down his bags, David sits on Sheila's bed, next to her armchair, and holds her hand -- for only the second time since the pandemic came to Britain.

The response from Sheila, his wife of 55 years, is impossible to read. She has advanced dementia and she rarely speaks.

"It's a long time since I've seen you," he tells her. "That's because of this Covid thing."

Throughout the pandemic, Sheila was cut off from everyone who loved her because Britain's nursing and care homes have largely remained closed to visitors. Now the UK's vaccine rollout has made an incremental but significant change possible. Each resident in England is allowed one designated, indoor visitor.

CNN received permission to observe some of the first moments where people in care were reunited with loved ones.

The elderly have sacrificed more freedoms than most during the pandemic, and more than half of Covid-19 deaths in England and Wales last year were from those over 80. They were prioritized in the UK's vaccine rollout from December and first doses have now been delivered to 99.9% of England's nursing and care homes, according to the country's National Health Service.

Around 23 million people in total across the UK have now received a first vaccine shot. That protection is allowing modest changes, the possibility of hope and glimpses of a post-Covid future. 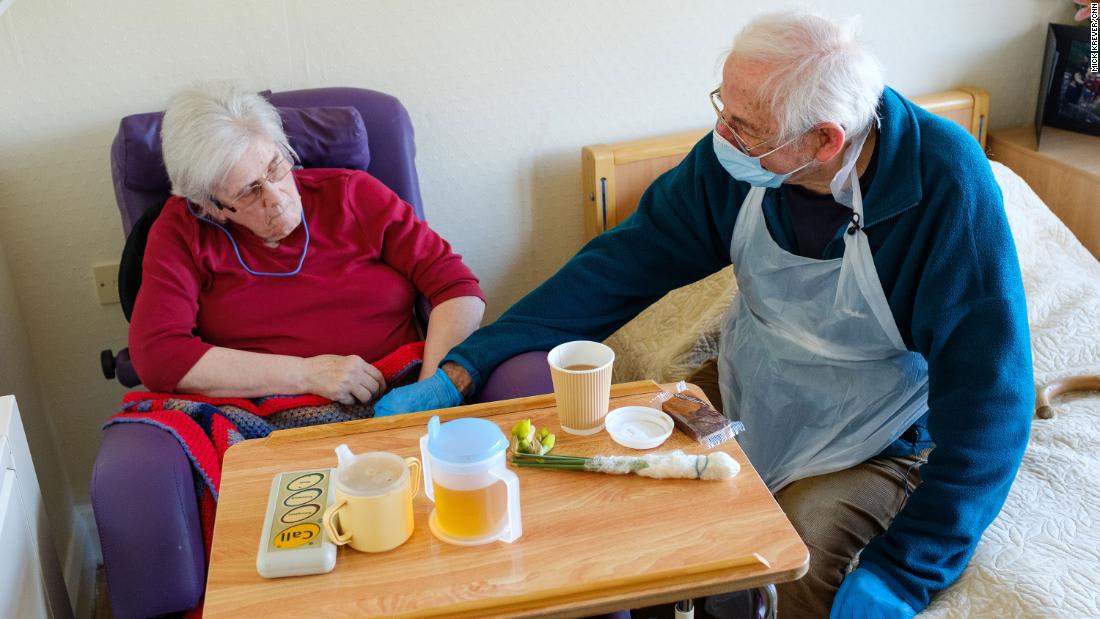 They can only hold hands, but for Britain's elderly, first touch with a relative 'means everything'

Germany will continue rolling out the Oxford-AstraZeneca Covid-19 vaccine while the European Union's medicines regulator investigates whether the shot could be linked to a number of reports of blood clots.

“We are planning to continue vaccinating with AstraZeneca, just like an overall majority of other European countries,” German Health Minister Jens Spahn said late Thursday.

The United Kingdom, France, Spain and the Netherlands have also said they would continue vaccinating with Oxford-AstraZeneca.

Denmark, Iceland and Norway on Thursday said they were suspending the vaccine's use as a precautionary measure.

Denmark announced a two-week suspension on Thursday following a number of reports of clotting in the country, including one fatal case. Iceland and Norway followed suit, but did not say how long their suspensions would last.

The European Medicines Agency (EMA) said Thursday that it did not recommend suspending use of the vaccine.

"The vaccine's benefits continue to outweigh its risks and the vaccine can continue to be administered while investigation of cases of thromboembolic events is ongoing," the agency added.

Earlier this week, a number of EU nations also paused the use of doses that came from a particular batch of AstraZeneca vaccine, after a 49-year-old woman in Austria died of multiple thrombosis on Sunday. The EMA said Wednesday there was "no indication" that vaccination had been behind the cases of clotting or death.

Spahn said he would monitor the situation closely and was in touch with his European counterparts on the issue.

In a statement on Thursday, AstraZeneca said that patient safety was its "highest priority," reaffirming its vaccine's safety and efficacy.

A Covid-19 outbreak at a luxury gym in Hong Kong has sparked fears of a "superspreader" event that could set off another wave of the virus in the city, after 60 new cases were confirmed on Friday.

Many of the latest infections were linked to the outbreak at Ursus Fitness center, which offers boxing and powerlifting classes in Hong Kong's trendy Sai Ying Pun district, which is popular with the city's expatriate community.

"We can say this is a super-spreading event," David Hui, a government adviser on the pandemic, told Hong Kong state media Radio Television Hong Kong (RTHK) on Friday, adding that the explosive spread in the fitness center had prompted concerns of a fifth wave of the pandemic.

Hong Kong reported its highest number of Covid-19 cases in more than six weeks on Thursday, according to the Centre of Health Protection (CHP). Of the 60 new cases, 47 have been linked to the gym, according to Chuang Shuk-kwan, CHP's head of communicable disease branch.

Chuang said the Hong Kong government will issue an order requiring workers at fitness centers to receive a compulsory Covid-19 test by Sunday. Anyone who visited gym facilities recently should also monitor their health and consider receiving a test, she added.

As of Friday, about 360 people related to the gym outbreak had been placed under government quarantine, she said, while their close contacts are required to take a Covid-19 test.

"It is a serious outbreak because many cases have popped up over a short period of time," Chuang said, adding that it is challenging because many of those infected work in different professions at the city center.

Thailand’s Prime Minister Prayut Chan-o-cha canceled plans to publicly get the AstraZeneca vaccine on Friday due to reports that people in Denmark and Austria had experienced blood clot side effects after receiving it.

Thai authorities have delayed the vaccine rollout while they consider the issue, said Dr. Piyasakol Sakolsatayadorn, a senior member of Thailand’s vaccine committee, in a news conference on Friday.

“The only purpose of our vaccination is the people’s safety. When there is an adverse event, we don’t need to be in rush,” Piyasakol said.

Officials said they would wait for the results of investigations in Denmark and by relevant health organizations in Europe before making further decisions.

Thailand received 117,300 doses of the AstraZeneca vaccine from overseas, government officials said earlier this month. The country was also planning on domestically producing 61 million doses of the vaccine through the Siam Bioscience pharmaceutical company.

India’s locally developed vaccine, Covaxin, has been given the same emergency use licensure as the Oxford-AstraZeneca vaccine, the country's Health Ministry announced Thursday.

Covaxin has been part of the nation's vaccine rollout since January 16. However, it was rolled out under "clinical trial mode," which meant that patients had to sign informed consent forms and required subsequent monitoring.

More than 1.9 million doses of Covaxin have already been administered.

Now, Phase 3 trials have shown an efficacy rate of 81%, and the vaccine has been granted approval under the “regular” emergency use authorization.

"This has taken the authorization for Covaxin to the next level, the same level at which another great vaccine Covishield has been operating,” said V K Paul of Niti Ayog, an Indian government-led think tank.

Rising cases: The approval comes as India battles a spike in infections. On Friday, the country recorded 23,139 new cases -- the highest 24-hour increase for the second day in a row since Christmas Day.

The surge is “related to the reduced number of testing, tracking and tracing as well as Covid-inappropriate behaviors and large gatherings," said Bhargava at a press briefing on Thursday.

Daily case numbers in the United States are "absolutely not" low enough to relax public health measures, according to Dr. Anthony Fauci, the director of the National Institute of Allergy and Infectious Diseases.

The US is still recording an average of 60,000 new infections per day -- which is "unacceptably high," Fauci told CBS Evening News. "That is risky for triggering another surge."

Fauci said cases need to fall below 10,000 per day in order to comfortably lift restrictions, such as wearing face masks.

Looking back a year after Covid-19 began to sweep the US, Fauci explained that measures to curb virus spread might have been stronger earlier if public health officials had known how highly transmissible the novel coronavirus was.

"If we had known that fully early on, there likely would have been differences in how we approached it," he said.