The country will also send one million surgical masks, and 100,000 gowns, gloves and sanitizer along with 200 non-invasive ventilators and 20,000 face shields to PNG.

Australia is suspending all outbound travel, including charter flights, to PNG for two weeks from midnight Wednesday, Morrison said. Only freight and some humanitarian workers will be exempted.

He also said that workers who fly in and out between the two countries should remain where they are. “The escalation of issues with the virus in Papua New Guinea, presents very real risks to Australia as well," he said.

Morrison said he has been in touch with his counterpart, PNG Prime Minister James Marape, as the rising number of cases in the country “are of great concern."

"We have been assisting with some (Covid-19) tests in Papua New Guinea and out of the 500 tests that our health authorities have done for Papua New Guinea, 250 have come back positive," said Queensland state Premier Annastacia Palaszczuk in a press conference Monday.

On Sunday, PNG reported 97 new coronavirus cases, bringing the total confirmed infections to 2,269, according to the country’s health ministry.

South Korea’s Disease Control and Prevention Agency (KDCA) announced Wednesday the country will carry on with vaccinations as there is currently no clear ground to stop using AstraZeneca’s Covid-19 vaccine.

In a press release, the KDCA pointed to the World Health Organization's (WHO) finding that there is no evidence blood clots are caused by the AstraZeneca vaccine and its recommendation not to stop vaccination due to fear.

The KDCA also quoted the European Medicines Agency (EMA)'s assessment that there is no indication the two cases of blood clots in Austria are related to the AstraZeneca vaccine.

More than 570,000 people have been vaccinated with AstraZeneca's Covid-19 shot in South Korea so far, but no links have been confirmed between vaccination and thrombosis, according to the KDCA.

The health team will keep monitoring people's reactions after vaccination and will closely review the results of the European Food and Drug Administration’s investigation as well as cases in other countries, it added.

The measure, which starts on Wednesday and lasts until the end of March, applies to every foreign worker and their employer in Seoul, Park said.

The city will send official letters to 4,457 businesses urging them to test their foreign employees.

Between January and March, 6.3% of those infected in Seoul were foreign nationals and Park said the measure was being taken to ensure the safety of the city's residents.

Those refusing the test could be fined up to 2 million KRW ($1,760) and sued for costs incurred if they were later linked to infections, Park added.

Similar measures were taken by neighboring Gyeonggi province following cluster infections in its manufacturing businesses. The province required its foreign workers to be tested and made negative coronavirus tests mandatory before they were hired, Health Ministry official Yoon Tae-ho said in a briefing Tuesday.

Park denied criticism that the measure was discriminatory, saying it only targets workers and the city had ordered testing of high risk groups in the past.

Two coronavirus strains first detected in California are now officially "variants of concern," according to the US Centers for Disease Control and Prevention.

The variants may be about 20% more transmissible, the CDC said, citing early research. Some Covid-19 treatments may also be less effective against the strains. Still, the CDC didn't say that vaccines would stop working against them.

In laboratory studies, antibodies from vaccinated people do seem to be less effective at neutralizing the strains. But lower levels of antibodies may still be enough to protect against Covid-19, especially severe cases. Certain immune cells can also help protect against disease -- not just antibodies.

No coronavirus variants currently rise to the US government's highest threat level, "variant of high consequence." Coronavirus strains shown to significantly reduce vaccine effectiveness would fall under that category. 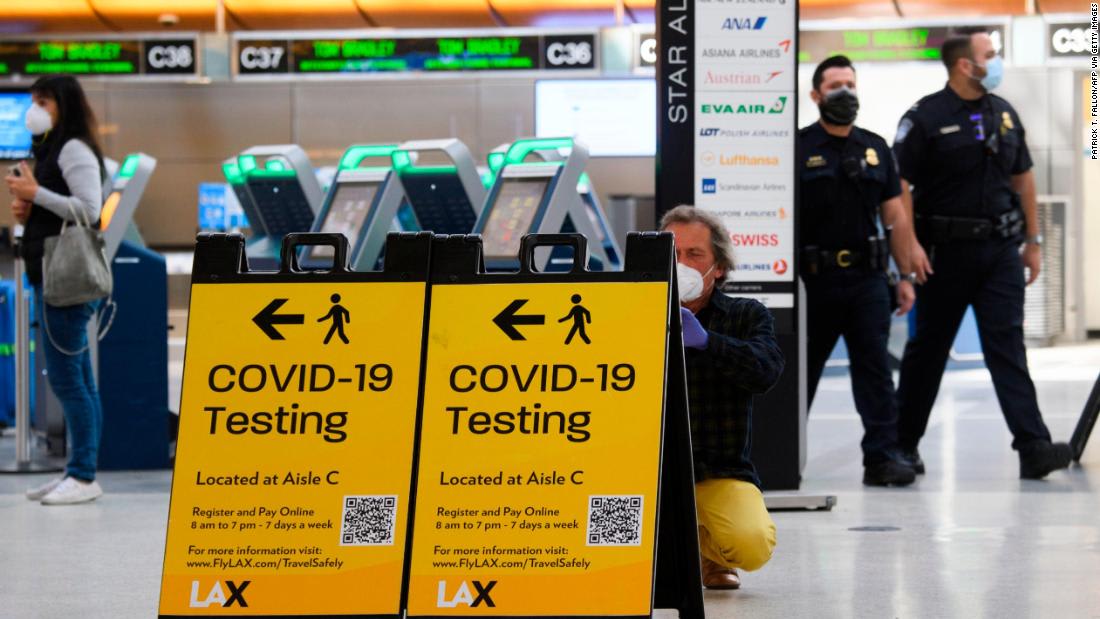 Brazil reported 2,841 coronavirus-related fatalities on Tuesday, its highest daily death toll since the pandemic began, according to the health ministry.

On Monday, Brazilian President Jair Bolsonaro announced the appointment of cardiologist Marcelo Queiroga as the country’s fourth health minister since the pandemic hit last March. Queiroga is replacing the current minister, Army General Eduardo Pazuello, who has led the health ministry since May 16, 2020.

The transition in the Ministry of Health will take place in a couple of weeks, according to Bolsonaro.

Meanwhile, governors of the most hit regions in the country announced the adoption of night curfews and more restrictive measures to try to curb the virus' spread.

Fourteen of the twenty-six Brazilian states, plus the Federal District, are under curfew --generally between 8 p.m. to 5 a.m. -- the majority of them enforced in the last week.