Ruud Dobber, president of AstraZeneca's biopharmaceuticals business unit, said on Monday that the company plans to apply for emergency use authorization from the US Food and Drug Administration for its Covid-19 vaccine in the first half of April.

“We are thrilled by the results we have disclosed this morning,” Dobber told CNBC’s Meg Tirrell.

“The plan is to file in the first half of April for the emergency use authorization,” Dobber told Tirell. “Of course, then it’s in the hands of the FDA, how fast they can decide about the approval.”

Assuming that the authorization takes place quickly, AstraZeneca hopes to deliver 30 million doses for use “instantly after the EUA,” Dobber said.

The Oxford-AstraZeneca vaccine became the subject of controversy earlier in the month when more than a dozen European countries paused their rollouts due to reports of blood clotting in patients post-inoculation.

Europe's medicines regulator, the European Medical Authority (EMA), investigated the concerns and on Thursday declared the Oxford-AstraZeneca vaccine to be "safe and effective." EMA executive director Emer Cooke said the group did not find that the vaccine causes clotting, though it could not definitively rule out a link to a rare blood clotting disorder.

Cooke added that the benefits of the vaccine outweigh the risks, a message previously stressed by both the EMA and the World Health Organization (WHO) earlier in the week. 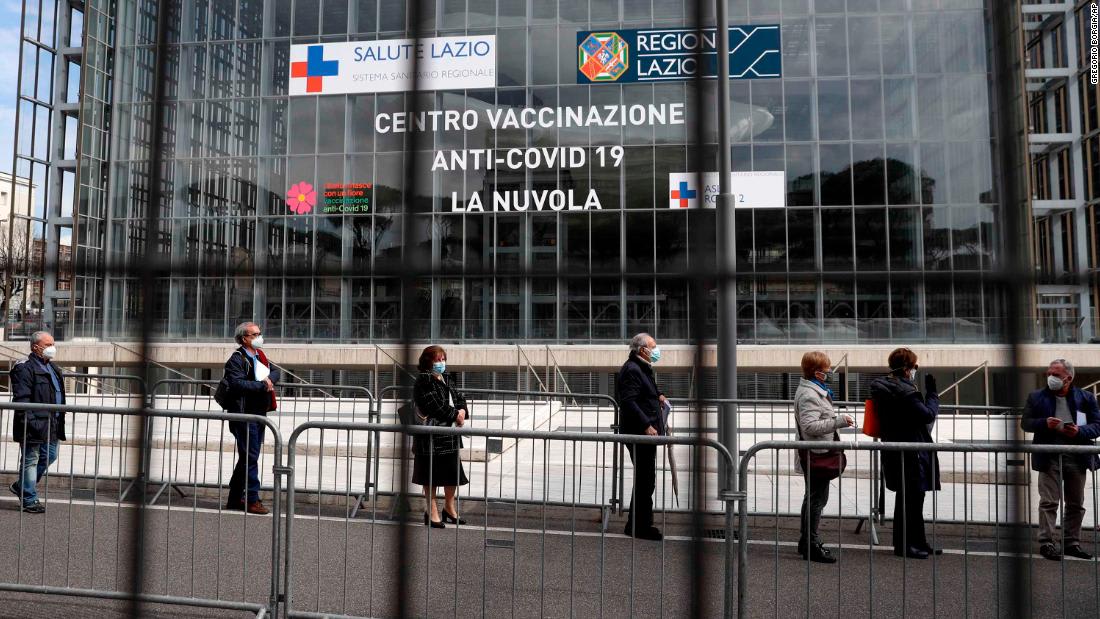 Police in the southern French city of Marseille broke up an illegal street party on Sunday attended by 6,500 unmasked people, according to a spokesman with the Bouches du Rhone police.

Dozens were fined for breaking coronavirus restrictions and nine people were arrested, according to the interior ministry’s spokeswoman.

It’s an insult to our health workers, it shows a total disrespect for all those who are making an effort and it’s unacceptable,” Camille Chaize told CNN affiliate BFM TV on Monday.

Many of the partygoers were protesting anti-lockdown measures, saying they are sick of it. Others were seen burning paper figurines in the shape of government ministers.

In an attempt to contain a third wave of Covid-19 sweeping the country, new lockdown restrictions came into effect Saturday for 16 regions in France -- Marseille is not one of them.

The mayor of Marseille took to Twitter Sunday to condemn the event. “Nothing justifies that we undermine our collective efforts to keep the virus at bay,” Benoit Payan tweeted.

Over the weekend, a similar gathering happened in the US when Miami Beach Police fired pepper balls into crowds of partiers and arrested at least a dozen people late Saturday as the city took extraordinary measures to crack down on spring breakers who officials have said are out of control.

More than 50 people have been arrested and eight firearms confiscated since Friday, according to a tweet from the Miami Beach Police Department on Sunday.

The country’s health minister Vassilis Kikilias announced the decision after an appeal for private practice doctors to step forward was met with a weak response.

"For weeks, the Health Ministry has sent an invitation -- an appeal -- to private doctors to strengthen the hospitals … during the third major wave of the Covid-19 pandemic. Unfortunately, very few private doctors came," Kikilias said.

"Taking into account the emergency conditions ... the Health Ministry is ordering the personal services of doctors in the specialties of physicians, pulmonologists and general practitioners," he said.

Greece is experiencing a surge in cases with hospitals in Athens bearing the brunt and intensive care wards running out of beds.

To alleviate pressure on the health system, the Greek government also announced that it will start distributing free self-testing kits in pharmacies from the first week of April. Anyone who wishes to be tested will be able to pick up one per week.

Despite a resurgence in cases, a number of outdoor archaeological spaces across Greece, including the Acropolis in Athens, have reopened to visitors. Greece last week announced the lifting of a number of Covid-19 restrictions, as part of a plan to gradually reopen ahead of the tourism season. The move was also to provide some outdoor “decompression” spaces for citizens after acknowledging that strict lockdown measures initially imposed in November are increasingly resulting in covid fatigue.

Hair and beauty salons reopened Monday and churches will have limited services in the build-up to Orthodox Easter.

The row between the European Union and the United Kingdom over the AstraZeneca vaccine is again heating up, with European Commission chief Ursula von der Leyen warning that the bloc could stop its exports from the EU.

“We have the option of prohibiting a planned export,” von der Leyen said in an interview with Germany’s Funke Mediengruppe over the weekend.

That is the message to AstraZeneca: You first fulfill your contract with Europe before you start delivering to other countries,” she added.

For background: The latest comments come after the pharmaceutical giant announced another shortfall in expected vaccine deliveries to the EU last week. Von der Leyen slammed AstraZeneca for alleged under-production and under-delivery, blaming them in part for the slow vaccine rollout in Europe.

Multiple UK media on Monday morning reported that Prime Minister Boris Johnson will be contacting individual EU leaders to urge them not to support the idea of a block on vaccine exports ahead of an EU leaders’ meeting Thursday, although Downing Street declined to comment when contacted by CNN.

Asked on Sunday about the risk of the EU blocking vaccine exports to the UK, British Defense Secretary Ben Wallace warned the European Commission that the “world is watching what happens.”

With cases rising again, Merkel and the state premiers are due to discuss an extension to the current lockdown that would last until the middle of April. The talks could also see the introduction of a night curfew in areas with a high seven-day incidence rate.

Foreign trips, for example to the popular Spanish holiday island of Mallorca, will also come under scrutiny.

Merkel is due to meet the premiers at 2 p.m. (9 a.m. ET) and will hold a press conference to announce details later Monday.

Some context: The German agency for disease control and prevention Monday reported 7,709 new cases, bringing the total to 2,667,225.

A total of 74,714 people have died from the disease in Germany, including 50 new recorded cases, the Robert Koch Institute reported.

So far, 10,479,936 vaccinations have been administered in the country, which are a combination of first and second doses.

The findings from the new Phase 3 trial, which included tens of thousands of participants, may boost confidence in the vaccine, which was originally developed by the University of Oxford.

The data will be sent to US regulators, the Food and Drug Administration (FDA), as part of an application for emergency authorization of the vaccine in the country, AstraZeneca said.

The trial showed the vaccine was well-tolerated and identified no safety concerns, the company said.

An independent committee “found no increased risk of thrombosis or events characterized by thrombosis among the 21,583 participants receiving at least one dose of the vaccine,” according to AstraZeneca.

The new data came from a Phase 3 clinical trial conducted in the United States, Chile and Peru. AstraZeneca says it plans to submit the findings to a scientific journal for peer review.

As part of the trial, more than 32,000 volunteers recruited across all ages received either two doses of the vaccine or a placebo vaccine at a four-week interval.

Recent controversy: The Oxford-AstraZeneca vaccine became the subject of controversy earlier in the month when a number of European countries including Norway, France and Denmark decided to temporarily suspend its rollout due to reports of blood clotting in patients post inoculation.

An emergency investigation by the European Medicines Agency (EMA) came to the conclusion last Thursday that the vaccine is “safe and effective” in preventing coronavirus and “not associated with an increase in the overall risk of thromboembolic events, or blood clots.”

What the data means: Co-designer of the vaccine and professor of vaccinology at Oxford University, Sarah Gilbert, hailed the data for providing “further confirmation of the safety and effectiveness” of the vaccine.

Lead investigator for the vaccine and professor of pediatric infection and immunity at Oxford University, Andrew Pollard, said the AstraZeneca data was “consistent with the results from Oxford-led trials,” adding that he expected a “strong impact against COVID-19 across all ages and for people of all different backgrounds from widespread use of the vaccine.”

India reported 46,951 new coronavirus cases on Monday, the highest single-day rise since November 12 and the sixth consecutive daily increase in infections, according to a CNN tally of figures from the country's Health Ministry.

The jump in infections comes almost a year since India's first nationwide lockdown.

A nationwide lockdown followed on March 24 and lasted for nearly three months.

The current jump in cases: According to the Indian Ministry of Health on Sunday, five states including Maharashtra, Punjab, Karnataka, Gujarat, and Madhya Pradesh accounted for 77% of the cases reported over the previous 24 hours.

Maharashtra on Friday restricted the number of people that can enter theaters and auditoriums to 50%, in addition to a previously imposed cap of 50% on office staff until March 31. Several districts in the state have also imposed full or partial lockdowns.

The state’s capital, Mumbai, will also be conducting rapid antigen tests at random in crowded places such as malls, railway stations, bus depots and markets among other places.

In the state of Punjab, night curfews are in place. In Gujarat state, schools and colleges are shut in eight metropolitan cities and a night curfew has been imposed in Ahmedabad city.

"In Punjab, Maharashtra, six to seven states contribute more than 86% of the case load, so in these states extra safety and awareness is required," Health Minister Harsh Vardhan told reporters on Sunday.

India has distributed 45,065,998 vaccine doses since January 16, according to the Health Ministry on Monday.

Turkey has surpassed 3 million Covid-19 cases and 30,000 deaths, according to the country's Health Ministry.

On Sunday, the ministry announced the nation has seen a total of 3,013,122 cases and 30,061 related deaths since the first infection was reported there on March 11 last year.

Of those, 20,428 infections and 102 fatalities were registered in the past 24 hours, according to the ministry.

Some 1,568 people are in critical condition, the ministry said. ICU occupancy is at 66.2%

Turkey is facing a resurgence in new infections following the easing of its Covid-19 restrictions at the start of the month with the partial reopening of schools and the reopening of restaurants to the public until 7 p.m.

According to government data, more than 13 million doses of the Sinovac coronavirus vaccine have so far been administered in Turkey, with frontline health workers and people over 65 years old being prioritized in the rollout.

Brazil reported Sunday that intensive care units in 25 out of 27 states are at least 80% full.

Of those, 14 have an ICU occupancy of over 90%, meaning they are overwhelmed or on the verge of collapse.

Two states in the south, Rio Grande do Sul and Mato Grosso do Sul, have reached capacity of over 100%.

Over the past week, Brazil’s Health Ministry has reported two of the highest numbers of new cases in a 24-hour period since January, topping well over 90,000 new daily cases on those two occasions.

"In this first batch, there are 1,022,400 doses of the AstraZeneca/Oxford immunizer. Another 1.9 million doses are expected to be released by the end of the month," Faria said. 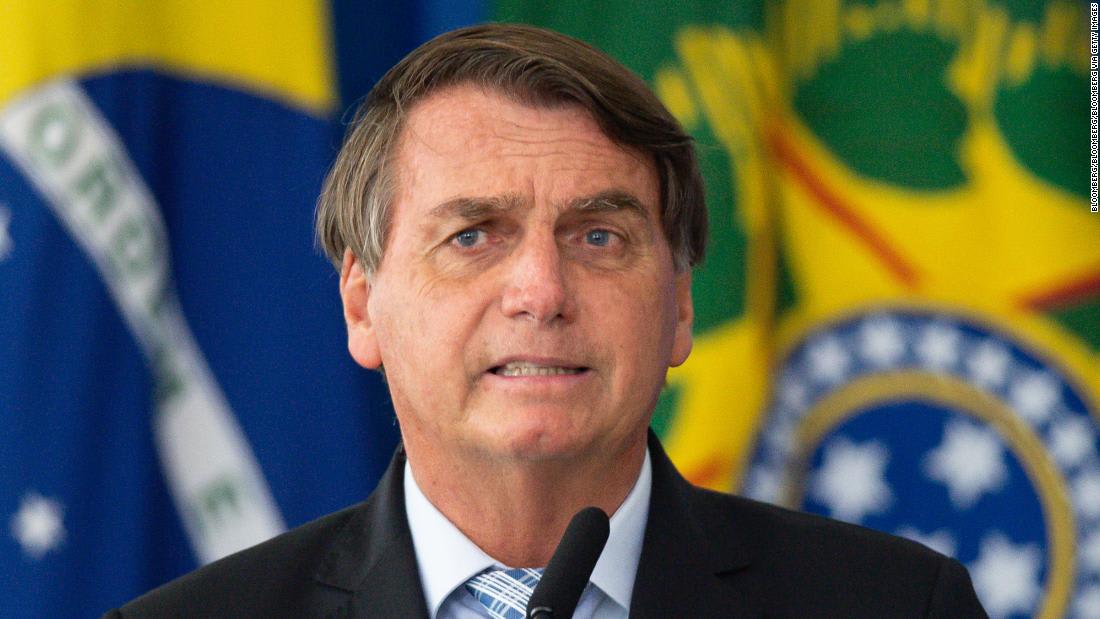