Dr. Rochelle Walensky, director of the US Centers for Disease Control and Prevention, said Monday night that increasing Covid-19 case numbers and variants led to her emotional warning of “impending doom” around Covid-19 during a White House Covid-19 briefing earlier in the day.

“I’m watching the cases tick up, I’m watching us have increased numbers of hyper-transmissible variants, I’m watching our travel numbers tick up, and the sense is, I’ve seen what it looks like to anticipate the oncoming surge,” Walensky told Rachel Maddow on MSNBC. “And what I would really hate to have happen is to have another oncoming surge, just as we’re reaching towards getting so many more people vaccinated, you know, we’re still losing people at 1,000 deaths a day.”

“I just can’t face another surge when there’s so much optimism right at our fingertips,” she said.

Covid-19 variants are a key cause for concern, in particular B.1.1.7, the variant first identified in the United Kingdom, she said.

While it’s possible that variants could evolve in such a way that they develop vaccine resistance and there is enough of them circulating that the US can’t get ahead of it, Walensky said that she doesn’t think the US is there right now.

“We do know that this hyper transmissible variant that we’re most worried about, the B.1.1.7 that originated in the UK, is now about 26% of all circulating virus around the United States right now,” she said, adding that it is dominating in some regions.

“That is concerning,” she said. “What we do know is that so far, it appears that the B.1.1.7 is neutralized by our current vaccines, but that is among our concerns, that if you have enough virus circulating, those variants can mutate even more and lead to sort of more troublesome variants in the future, which is why we just really want to stop the circulation of virus.”

When the British government released its guidance on who should be first in line for the Covid-19 vaccine last year, Dr. Zahid Chauhan was surprised to see that one particularly vulnerable group of his patients had been left off the priority list: The homeless.

The pandemic has had a huge impact on the homeless community in the UK and around the world, because many services normally available to them have been shut.

"They are an extremely vulnerable group, they die at the age of 43, 44 -- their life expectancy is that low," said Chauhan, a GP in the northern English town of Oldham. "It was very clear that that group has been missed."

Studies conducted in Paris, Boston, Chicago and Ontario, Canada, among others, have all shown that homeless people and those who have recently experienced homelessness are more likely to become infected, more likely to require intensive care treatment and more likely to die of the virus, compared to the general population. 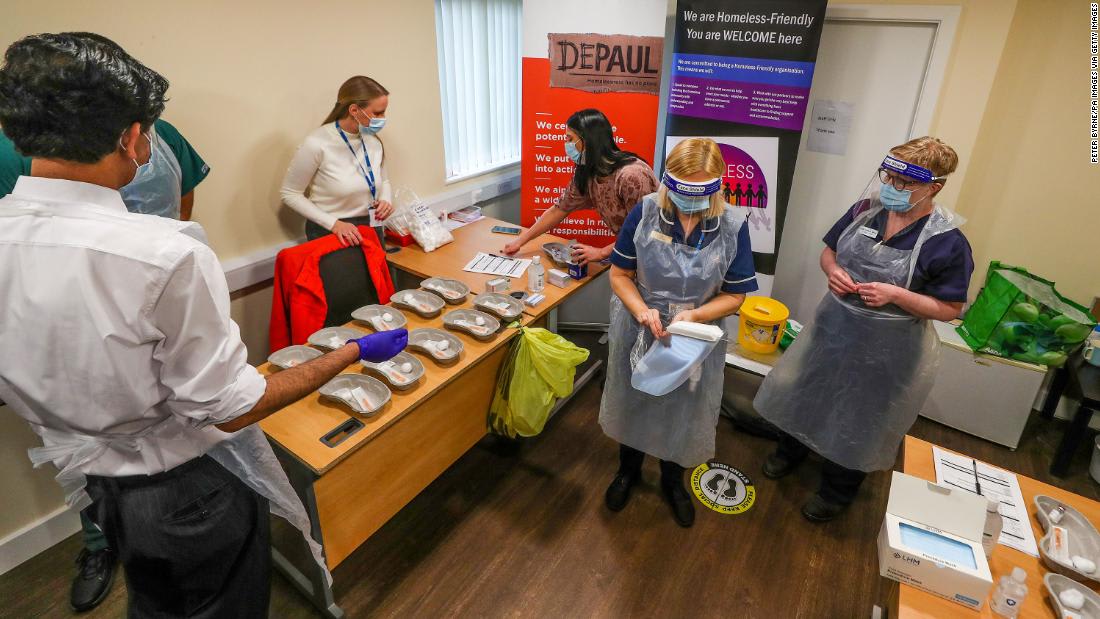 US President Biden implored state and local officials to reinstate mask mandates, after Dr. Rochelle Walensky, director of the Centers for Disease Control and Prevention, shared her feelings of "impending doom" at a White House Covid-19 briefing.

The plea comes as some states have lifted requirements for face coverings, as well as guidance on restaurant capacity and other measures, and cases have again begun to rise. Last week, the Biden administration called on states to slow the relaxation of Covid-19 guidelines.

“I need the American people do their part as well. Mask up, mask up. It's a patriotic duty. It's the only way we ever get back to normal,” he said.

Biden also suggested businesses should also require the use of masks. “The failure to take this virus seriously precisely what got us to this mess in the first place, risk more cases, more deaths."

Walensky said she would be conveying Biden’s message to governors.

“With regard to the surging, we are working closely with the states. I will be speaking with the governors tomorrow to try and reinforce the need for current restrictions to not open up,” Walensky said earlier Monday.

“I think what we’ll do on masking will really depend on where we are 30 days from now.”

Experts have warned another case surge is likely on its way in the coming weeks, one that will this time be fueled by coronavirus variants. Health officials are preparing for a possible third wave that will be driven by a rapidly spreading variant that was first identified in the UK.

Data from the CDC shows 2,102 cases of the variant have been detected across the US -- but scientists have warned that number likely doesn't represent the total of cases in the country.

A hospital in Berlin has temporarily stopped administering the AstraZeneca vaccine to female staff members below the age of 55 as a precaution, following reports of cerebral venous sinus thromboses -- blot clots in the vessels that drain blood from the brain -- after vaccination.

"As of today, no further [AstraZeneca] vaccinations will be carried out at Charité – University Medicine Berlin for younger female employees under the age of 55 for the time being,” the hospital said in a statement Tuesday.

“From the Charité's point of view, this step is necessary because in the meantime further cerebral venous sinus thromboses have become known in women in Germany. Although no complications have occurred at the Charité after vaccinations with AstraZeneca, the Charité wants to take precautionary action here and await final assessments."

The Charité is not a vaccination center, so the change only concerns vaccinations for their staff members.

Germany joined other EU Member countries, including Spain, France and Italy, in temporarily halting the rollout of the Oxford-AstraZeneca Covid-19 vaccine over a small number of blood clot concerns in the beginning of March, going against the advice of international medical agencies.

The European Medicines Agency conducted a preliminary review earlier this month and concluded the shot was not associated with a higher overall risk of blood clots. It did find it could possibly be linked to very rare cases of clotting associated with thrombocytopenia, or low levels of blood platelets. It concluded the benefits of the vaccine still outweighed the risk in combating Covid-19, and said it would continue to investigate any possible links.

All travelers planning to enter Germany now require a negative coronavirus test. The new regulation, which came into effect Monday at midnight local time, says that the test has to be taken before leaving for Germany, regardless of the coronavirus situation in the country the traveler is coming from.

The regulation was publicized through an update to the German government's travel orders. and will stay in force until May 12. Those who cannot produce a negative test will not be allowed to board planes bound for Germany. The new rule is designed to also protect passengers on planes.

The test can be a PCR lab test or a quick test. The result can be presented on paper in German, English or French, but must not be more than 48 hours old.

China’s Ministry of Foreign Affairs says “relevant departments” are studying the World Health Organization’s report on the origins of Covid-19.

“China side has received the joint research report distributed by the WHO, and relevant departments are studying it. What I want to emphasize is that the issue of virus origin tracing is a scientific issue and [it] should be left to scientists to conduct research,” MOFA said in a fax to CNN in response to questions on China’s reaction to the findings of the upcoming report.

The WHO is scheduled to release the final report on Tuesday, but a draft version obtained by CNN shows the report gives four possible sources for the virus, the most likely scenario being that it spread to humans via an animal host.

Like much of Europe, Italy has faced a slow vaccine rollout at a difficult moment, with a third wave of infections threatening to grip Europe one year after the pandemic began. The country has vaccinated more than 3 million people people, according to the Ministry for Health.

Millions in Italy have had their Easter plans canceled, in scenes reminiscent of last March when the country became the first European nation to restrict people's movement as the coronavirus ran rampant.

Half of Italy's 20 regions were placed under new coronavirus restrictions on March 15. The measures, which impact the cities of Rome, Milan and Venice, will be in lace until April 6.

Canada has become the latest country to halt the AstraZeneca vaccine for certain groups while rare cases of blood clots following vaccination are being investigated.

The country's National Advisory Committee on Immunization recommended a pause, as a precautionary measure, for adults 55 and under on Monday, saying that there was "substantial uncertainty" about the benefits of the vaccine in that age group.

The rare cases of serious blood clots, known as vaccine-induced prothrombotic immune thrombocytopenia (VIPIT), have recently been reported in Europe following post-licensure use of the AstraZeneca vaccine, primarily in women under the age of 55.

The committee said because the AstraZeneca vaccine was expected to only make up a small proportion of the Covid-19 vaccines available for use in Canada, vaccinations "will not be significantly delayed."

The European Medicines Agency conducted a preliminary review earlier this month and concluded the AstraZeneca shot was not associated with a higher overall risk of blood clots. It did find the shot could possibly be linked to very rare cases of clotting associated with thrombocytopenia, or low levels of blood platelets. It concluded the benefits of the vaccine still outweighed the risk in combating Covid-19.

Canada has reported almost 970,000 presumed or confirmed cases of the coronavirus since the start of the pandemic and has recorded more than 22,000 deaths.

World Health Organization Director General Tedros Adhanom Ghebreyesus says China and the United States will be included in discussions on an international treaty on future pandemics, insisting the absence of their leaders’ signatures on a joint-letter calling for the treaty “wasn’t even a problem.”

More than 20 world leaders and the WHO signed the letter, published on Tuesday, which calls for an international treaty to protect future generations from pandemics.

Speaking to the press in Geneva, Tedros said he didn’t want the notable exceptions to the list -- including China, the US and Russia -- “to be seen as a problem.” He clarified that “when the discussion on the pandemic treaty starts, all member states will be represented.”

The WHO chief described the letter as being “opt-in, countries who were interested were flagging to join,” but emphasised that comments from states including the US and China were “actually positive.”

Tedros called for the world to “act boldly with an internationally-coordinated, all of government, all of society, one held approach to pandemic preparedness and response.”

He made his comments after a meeting with European Council President Charles Michel, who warned that no country could defeat a pandemic alone.

Michel said a lot of countries whose leaders had not signed the letter “are reacting quite positively to the idea.” 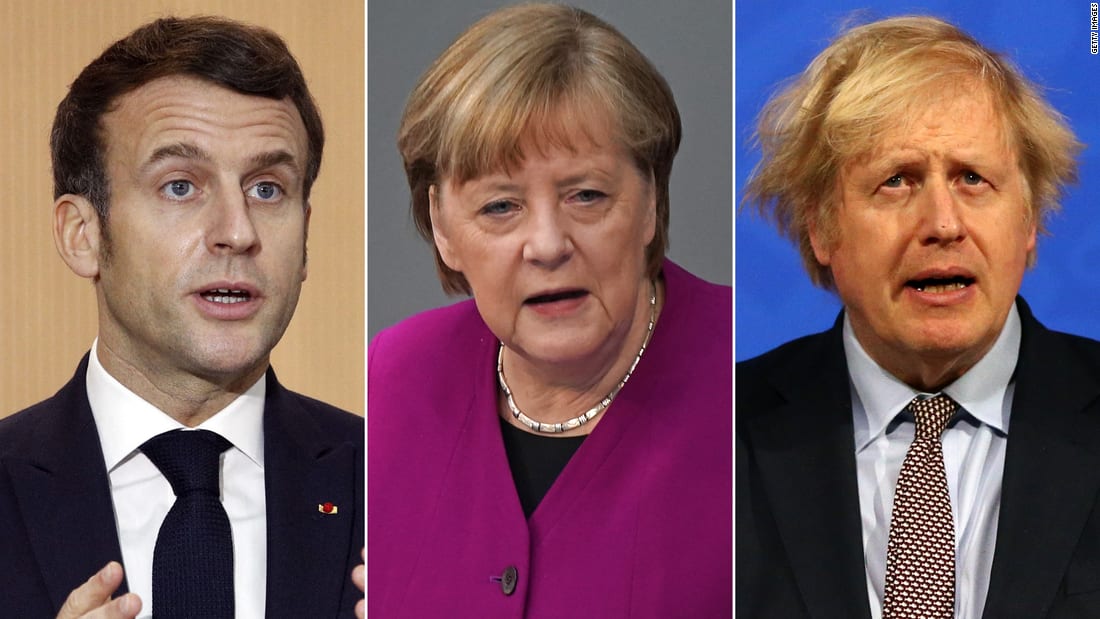 World leaders unite to call for pandemic treaty, saying: 'No one is safe until we are all safe'