Overall, at least 12,053 cases of coronavirus variants first spotted in the UK, South Africa and Brazil have been reported in the US, according to the Centers for Disease Control and Prevention.

Most of these cases, 11,569, are the more contagious variant known as B.1.1.7, which was originally detected in the UK. This variant has been found in 49 states, Puerto Rico and Washington, DC.

Note on the data: CDC says this does not represent the total number of such cases circulating in the US, but rather just those that have been found by analyzing positive samples. The agency cautions that its numbers may not immediately match those of state and local health departments.

As coronavirus cases in more than 20 states in the US are rising, White House press secretary Jen Psaki said that Americans still need to be vigilant about the virus.

“We’re still at war with this virus,” Psaki told CNN’s Alisyn Camerota. “… People need to be vigilant now. We know people are frustrated. They're tired of sacrificing. We get that completely here. But we need to keep at it.”

The administration’s focus is on getting vaccines out to states, she said.

Psaki said that states rolling back mask mandates and reopening fully are not abiding by public health guidelines.

After Pfizer/BioNTech announced today its Covid-19 vaccine showed 100% efficacy in youths ages 12 to 15, Psaki said that Secretary of Education Miguel Cardona is “very confident” that children will be back in school for in-person learning in the fall.

While the US Food and Drug Administration needs to do its own analysis of the data, Psaki said the news makes parents “feel even more confident about your kids potentially being back in the classroom soon.”

Michigan leads the US with the highest number of Covid-19 cases per capita, and some experts say the rising case count in the state is a third surge.

"I think we are in the third surge in Michigan," Dr. Joneigh Khaldun, chief medical executive of the Michigan Department of Health and Human Services, told CNN on Sunday, with cases increasing the most in people between the ages of 10 and 19.

Khaldun attributed the rise in cases to a number of factors, including increased gatherings, reopenings and outbreaks in some prisons and schools.

Outbreaks related to sports and student gatherings are a particular concern, with 315 outbreaks linked to student sports teams or recreational clubs in the first two months of 2021. Michigan is now testing more in schools and it will be mandatory for those playing sports.

"Anyone age 13 to 19 whose playing organized sports, they have to get tested at least weekly," Khaldun said.

She added: "If they have symptoms, they can't play at all."

"Carnivak-Cov, a sorbate inactivated vaccine against the coronavirus infection (COVID-19) for carnivorous animals, developed by Rosselkhoznadzor’s Federal Center for Animal Health, has been registered in Russia. So far, it is the world’s first and only product for preventing COVID-19 in animals," Konstantin Savenkov said.

The vaccine will likely go into mass production as early as April, according to the TASS report.

"The outcome of the research gives us grounds to conclude that the vaccine is safe and has strong immunogenic effect, because all vaccinated animals developed antibodies to novel coronavirus in 100%” Savenkov said, according to TASS.

The report said that the effect of the vaccine “is estimated to last no less than six months," quoting Savenkov.

"According to Russian scientists, the use of the vaccine can prevent further mutations of the virus," the Russian official said, adding that multiple firms from Greece, Poland and Austria plan to buy the vaccine.

Savenkov added that companies from the United States, Canada and Singapore have also “demonstrated interest".

In May last year, Denmark culled 17 million minks over concerns the animals were spreading a mutated form of coronavirus.

Results from Pfizer/BioNTech's Covid-19 clinical trial in 12 to 15 year olds mean that age group in the US could receive vaccines as soon as the fall, Dr. Peter Hotez, co-director of the Center for Vaccine Development at Texas Children's Hospital, told CNN.

The vaccine was 100% effective in preventing symptomatic Covid-19, the companies said, and was well tolerated.

“I think it’s likely a green light to move forward, to move down in terms of vaccinating adolescents 12 to 15,” Hotez said.

He added that "by the fall I think there’s a good possibility we’ll be vaccinating teenagers, 12 and up."

Pfizer/BioNTech plan to submit the data to the US Food and Drug Administration as soon as possible for expanded emergency use authorization of the two-dose vaccine.

The trial included 2,260 participants, and while Hotez said this was a relatively small study, he said he thought it was enough to move ahead with.

French President Emmanuel Macron is expected to tighten coronavirus restrictions on Wednesday as case numbers and admissions to intensive care units soar across France, where the government has been resisting a third nationwide lockdown.

Macron will address the nation at 8 p.m. (2 p.m. ET) as he faces growing criticism over his approach to the current Covid-19 surge. His administration has favored regional restrictions over the strict national lockdowns imposed in other European nations, against the advice of France's scientific council.

A nationwide 7 p.m. curfew is in place, while non-essential businesses are closed and movement restricted in 19 of the 96 departments on mainland France, but there are few other measures to slow the rapid pace of infection across the country.

Macron, who is up for reelection next year, has justified the strategy by saying the country needed to consider the impacts on mental health and the economy in devising a balanced response to the third wave.

But today, more than 28,000 people are being treated in hospital for Covid-19 in France, including 5,072 in intensive care units (ICU), according to French health ministry data. It's the first time since April last year that ICU patient numbers have surpassed 5,000. 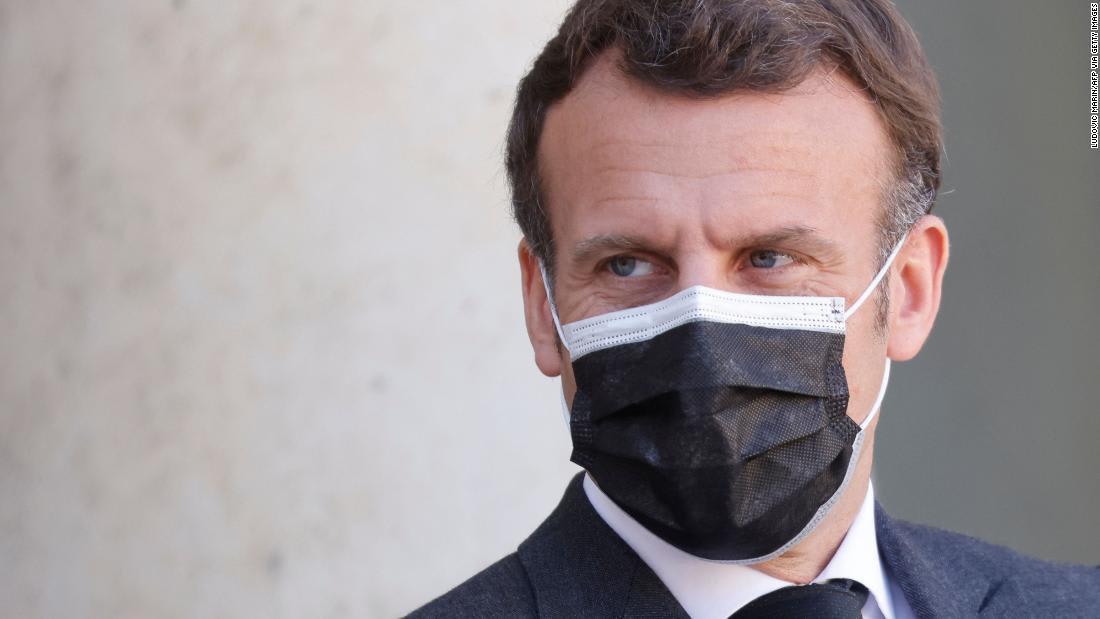 The government announced 302 deaths Wednesday, the largest in a single day, bringing the country’s pandemic death toll to 20,737. The government statement said most of those who died were elderly or chronically ill.

Government spokesman Zoltan Kovacs told CNN the reason for the record number of deaths was the “British mutation” of the virus, referring to the B117 variant first identified in the UK. He said the variant was causing “relatively more hospitalizations and fatalities.”

Hungary has the world’s second-highest coronavirus death rate per capita – 209 deaths per 100,000 people, according to data tracked by CNN. Among countries with significant population sizes, only the Czech Republic has a higher rate of coronavirus deaths.

Hungary’s high death rate comes despite its not having a particularly high rate of coronavirus cases – its 6,609 cases per 100,000 people puts it in the middle third of European Union countries – and the second-highest vaccination rate in the EU, behind the small Mediterranean nation of Malta.

Clinical trial results of Pfizer/BioNTech's Covid-19 vaccine showed its efficacy is 100% and it is well tolerated in youths ages 12 to 15, the companies said Wednesday.

Pfizer/BioNTech plan to submit the data to the US Food and Drug Administration as soon as possible for expanded emergency use authorization of the two-dose vaccine.

In a Phase 3 trial of 2,260 participants ages 12 to 15 years in the US, the vaccine elicited strong antibody responses one month after the second dose, exceeding those demonstrated in people ages 16 to 25 in previous trials, Pfizer/BioNTech reported. The vaccine is currently authorized in the US for emergency use in people ages 16 and older.

Pfizer/BioNTech added that the side effects observed in people ages 12 to 15 were similar to those seen in 16 to 25-year-olds. The participants will be monitored for protection and safety for two years after their second dose.

“We share the urgency to expand the authorization of our vaccine to use in younger populations and are encouraged by the clinical trial data from adolescents between the ages of 12 and 15,” said Pfizer CEO Albert Bourla.

"We plan to submit these data to FDA as a proposed amendment to our Emergency Use Authorization in the coming weeks and to other regulators around the world, with the hope of starting to vaccinate this age group before the start of the next school year.”

A separate Phase 1/2/3 study of the Pfizer/BioNTech vaccine in children ages 6 months to 11 years launched last week, when the first participants ages 5 to 11 received a shot.

Pfizer/BioNTech plans to begin dosing 2 to 5-year-olds next week and work its way down to participants ages 6 months to 2 years. The company aims to enroll 4,644 children in the trial and expects results by the end of 2021.

Moderna is also testing its Covid-19 vaccine in adolescents and children, in two clinical trials of children ages 12 to 17 and those ages 6 months to 11 years. 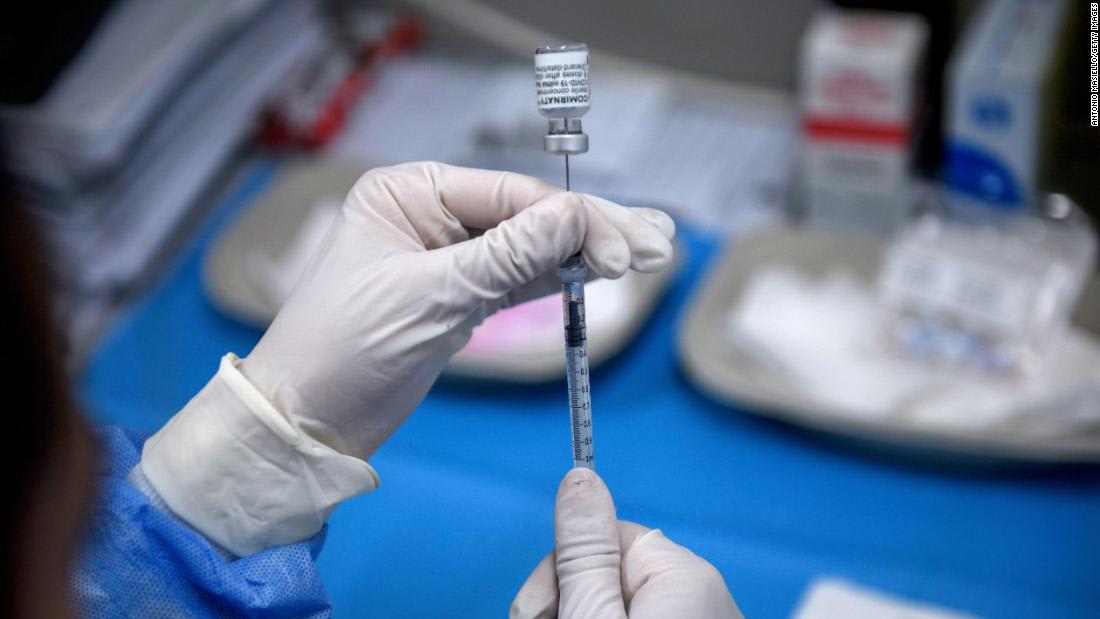 China's foreign ministry on Wednesday said it was “immoral” and “unpopular” to politicize the issue of virus origin tracing after 14 countries, including the United States, raised concerns in a joint statement on the World Health Organization report released Tuesday, following its Wuhan investigation.

“We have repeatedly emphasized that origin tracing is a scientific issue, and it should be carried out cooperatively by global scientists and cannot be politicized, which is also the consensus of most countries,” said foreign ministry spokeswoman Hua Chunying in a regular briefing Wednesday.

Hua said the joint statement questioning the report is concrete evidence that countries like the US “disrespect science” and “engage in political manipulation.”

“The politicization of origin tracing is extremely immoral and unpopular, which only hinders global cooperation and [the] global fight against the virus,” said Hua, adding the efforts run counter to the wills of the international community and will never succeed.

Governments from countries including the United States, Australia and Canada, jointly expressed concerns about the WHO report released Tuesday on COVID-19 origin tracing in China and called for independent and fully transparent evaluations with access to all relevant data in the future.