A limited number of spectators are set to return to sporting events in the UK, with pilot events being planned at London’s Wembley Stadium, beginning with the FA Cup Semi-Final fixture between Leicester City and Southampton on April 18.

Brent council in England confirmed to CNN that email invites have been issued to locals in the Wembley Park area to register interest in attending the FA Cup semi-final fixture, as well as the Carabao Cup final between Tottenham Hotspur and Manchester City on Sunday April 25, at Wembley Stadium.

The email confirmed socially distanced spectators will be allowed in to each pilot event with local care staff, local school teachers and pupils over 18, Wembley Park residents are top of the list as they are ‘"already in regular testing regimes."

The events are expected to be attended by about 4000 fans – part of the UK government’s roadmap plan to reopen which was announced in February and is ahead of schedule.

In the largest outdoor seated venues, where crowds can be spread out, up to 10,000 people will be able to attend (or a quarter-full, whichever is lower.)

Leicester City manager Brendan Rodgers welcomed the reports when asked in a news conference on Thursday.

“It’s great news,” he said, “4000 (fans) in a 90,000+ stadium will look small, but I think it’s the access for supporters. Of course, both teams would have loved it to have been their own supporters, given the opportunity, but at least we were making movements towards supporters coming back, so that’s great news.”

The FA Cup semi-final fixture will mark the first return of spectators to UK sporting venues since the tier system was scrapped in December and will be seen as a positive step with European football’s showpiece event, the European Championship set to host it’s semi-final and final fixtures at Wembley Stadium in July.

CNN has reached out to England’s Football Association for comment.

The US Centers for Disease Control and Prevention is expected to announce new travel guidelines on Friday for people who have been fully vaccinated against Covid-19, according to a federal official.

More details are expected at a White House Covid-19 Response Briefing at that will take place at 11a.m. ET.

Those who have been fully vaccinated against Covid-19 can safely gather for Easter this Sunday, indoors and without wearing masks, the US Centers for Disease Control and Prevention said on Twitter.

In a series of tweets, the public health agency also recommended that those who aren't fully vaccinated enjoy Easter dinner and egg hunts with the people they live with, or outdoors while six feet apart, in order to protect against spreading Covid-19.

The reminders align with the existing CDC guidance for people who are fully vaccinated.

The CDC says it's still learning how vaccines protect against the coronavirus, and advises that fully vaccinated people going out in public still wear masks and take precautions until the agency knows more.

“The good news is that the vaccines that we have to date have proven to be both safe and effective, including against the variants,” Murthy said. “Our concern is that in the future, some of those variants may be much more resistant to protection from a vaccine.”

“We are in this race between the vaccines and the variants. The more quickly we get people vaccinated, the more we’ll be able to lower the overall amount of infection in our community,” he said.

“When that infection is high, there are more chances for the virus to replicate, to mutate, and lead to these variants.”

The US economy's recovery from the pandemic strengthened in March as employers added 916,000 jobs, the Labor Department reported Friday.

The job gain was up from the revised 468,000 increase in jobs reported for February.

The unemployment rate improved to 6%, compared with the 6.2% in February.

But while some sectors are back to their pre-pandemic employment levels, the overall US economy still has more than 8 million fewer jobs than it did before Covid-19 related job losses started a year ago.

US drugmaker Johnson & Johnson announced on Friday that it will soon begin vaccinating children as young as 12 in the company’s ongoing Phase 2a clinical trial of its Covid-19 vaccine -- and already has begun vaccinating older adolescents.

The Phase 2a study, which began in September 2020, was initially designed to study single-dose and two-dose regimens of the vaccine, at different dose levels and schedules, in healthy adults ages 18 to 55 and 65 and older. The study now includes adolescents.

"In addition to expanding this ongoing study to include adolescents, we are in discussions with health authorities and are hard at work to initiate studies in pregnant women and children in the near future," Dr. Mathai Mammen, Janssen’s global head of research and development, said in a statement on Friday. Janssen is the vaccine arm of Johnson & Johnson.

The statement noted that the Johnson & Johnson vaccine will initially be tested in a small number of adolescents ages 16 to 17.
Following the review of initial data in this Phase 2a trial, the study then will be expanded to a larger group of younger adolescents.

This trial is currently enrolling participants in Spain and the United Kingdom, and enrollment is expected begin shortly in the United States, the Netherlands and Canada, and then Brazil and Argentina.

"The COVID-19 pandemic has had a profound impact on adolescents, not just with the complications of the disease, but with their education, mental health, and wellbeing," said Dr. Paul Stoffels, Johnson & Johnson's vice chairman of the executive committee and chief scientific officer.

"It is vital that we develop vaccines for everyone, everywhere, to help combat the spread of the virus with the goal to return to everyday life," Stoffels said.

This post has been updated to clarify the timeline around the vaccination of teenagers in its trial.

Violent clashes broke out between Brussels police and people gathering to attend a fake April Fool's Day festival on Thursday in violation of coronavirus restrictions.

Ilse Van de keere, spokesperson for the Bruxelles Ixelles Police, told CNN on Friday that 26 police officers and eight participants of the illegal event were injured when police tried to break up the gathering.

The windows of a police van were smashed and seven police horses were injured Van de keere said, and that 22 people were arrested.

Footage from the scene shows police officers on horseback appearing to strike participants with batons and spraying water cannons to try and disperse the crowd.

The hoax event, called "The Party," was widely promoted on social media networks as an outdoor festival in the city's Bois de la Cambre park.

A Facebook event page for the event boasted a lineup of "100s of DJs" and free admission for participants.

On March 17, the Brussels police posted a tweet warning potential attendees that the event was an April Fool's joke, adding that no authorization had been given and police would be present.

A number of anti-lockdown events and protests have taken place in Brussels this year with one protest on February 1 resulting in 488 arrests.

Foreign diplomats and aid workers have fled North Korea en masse in recent months due to shortages of goods and "unprecedented" restrictions on daily life imposed to stop the spread of coronavirus, according to the Russian Embassy in Pyongyang.

The embassy said in a statement on its official Facebook page that there are now only 290 expatriates within North Korea, including just nine ambassadors and four charge d'affaires. All foreign personnel working for NGOs and humanitarian organizations have left the country.

Before the Covid-19 pandemic, Russia had one of the biggest diplomatic missions in North Korea, but its presence has dwindled recently. Months of living with strict public health measures and coping with extreme shortages of "necessary goods," including medicine appear to have taken a toll.

Diplomats, aid workers and NGO staff have chosen to leave North Korea rather than risk being stranded due to the country's inflexible and strict border controls -- shrinking Pyongyang's already small expatriate community, a valuable source of information on one of the world's most reclusive and secretive countries.

North Korea's borders have been effectively locked down for months as part of Kim Jong Un regime's efforts to keep Covid-19 at bay, stranding the few diplomats operating inside Pyongyang.

Experts believe Kim decided to sever almost all of North Korea's ties with the outside world because he recognized his country's dilapidated healthcare system would be overwhelmed by a Covid-19 outbreak.

Kim's strategy appears to have worked from a public health standpoint. North Korea has not reported a major outbreak of Covid-19, and there have been no indications one has taken place, though experts doubt Pyongyang's claim the country has not seen a single case of the virus. 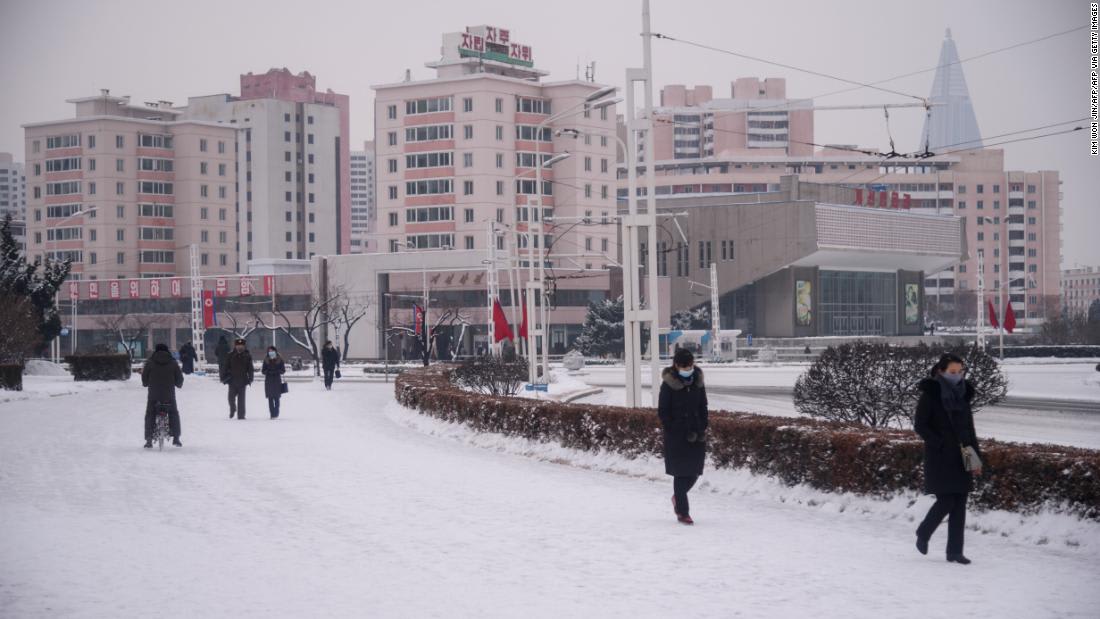 North Korea sees mass exodus of foreigners due to Covid-19

It’s OK to squeeze more doses out of vials of Moderna’s coronavirus vaccine, the US Food and Drug Administration said in a revision to Moderna’s emergency use authorization Thursday.

The FDA also authorized a 15-dose vial of Moderna vaccine Thursday – something the company has been working to organize since February.

“The first revision clarifies the number of doses per vial for the vials that are currently available, in that the maximum number of extractable doses is 11, with a range of 10-11 doses, the FDA explained in a statement.

"The second revision authorizes the availability of an additional multi-dose vial in which each vial contains a maximum of 15 doses, with a range of 13-15 doses that can potentially be extracted,” the FDA said.

Dr. Peter Marks, director of the FDA’s Center for Biologics Evaluation and Research, which regulates vaccines, said that:

Both of these revisions positively impact the supply of Moderna Covid-19 vaccine, which will help provide more vaccine doses to communities and allow shots to get into arms more quickly. Ultimately, more vaccines getting to the public in a timely manner should help bring an end to the pandemic more rapidly."

The FDA also said that “because the Moderna Covid-19 vaccine does not contain preservative, any further remaining product that does not constitute a full dose should not be pooled from multiple vials to create one full dose."

"If one vial becomes contaminated during use, pooling doses from multiple vials can spread contamination to other vials,” it said.

Last December, the FDA said it was acceptable to squeeze six -- or even seven doses of vaccine out of the Pfizer-BioNTech vaccine's five-dose vials.

A certain type of syringe is needed to make this possible.