The Brazilian Senate will open an inquiry into the government's handling of the Covid-19 pandemic, as President Jair Bolsonaro continues to avoid lockdown measures despite the country's mounting death toll.

Earlier this week, Bolsonaro shrugged off criticisms that he is "genocidal" in his opposition to Covid-19 restrictions, as the nation recorded its deadliest 24 hours of the pandemic. Bolsonaro has downplayed the threat of the virus while claiming that the economic impact of shutdowns would hurt Brazilians more than Covid-19.

Brazilian Supreme Court judge Luis Roberto Barroso ordered the Senate to set up a commission for the investigation on Thursday, after requests from 32 of Brazil's 81 senators. Announcing the ruling, Barroso said that Brazil is "at its worst, breaking regrettable records of daily deaths and cases of infection."

The president of the Senate, Rodrigo Pacheco, said he would comply with the order but that the investigation could sabotage efforts to fight the pandemic and become a "political theater aiming at the 2022” general elections.

Barroso has called for the inquiry to focus on "the actions and omissions" of the federal government, particularly in the state of Amazonas. Several Covid-19 patients reportedly died in Manaus, the state's capital, when hospitals ran out of oxygen earlier this year.

The Supreme Court also ruled Thursday that states and municipalities have the power to prohibit in-person religious gatherings, a move that Bolsonaro had fiercely opposed.

Indonesian President Joko Widodo warned against vaccine nationalism and called for support on “vaccine multilateralism” on Thursday in a summit held online between the leaders of the Developing Eight Group (D-8), according to state-run Antara news agency.

“D-8 must continue to promote equitable access to vaccines," Widodo said. “Vaccine affordability and availability is key to exit the pandemic.”

Addressing the group via video conference Thursday, Widodo warned: “We are witnessing an increase in vaccine nationalism and we must reject this.”

He called on the D-8 leaders to be open to future cooperation in vaccine development and production.

“We must support vaccine multilateralism,” he said, according to the Antara report. 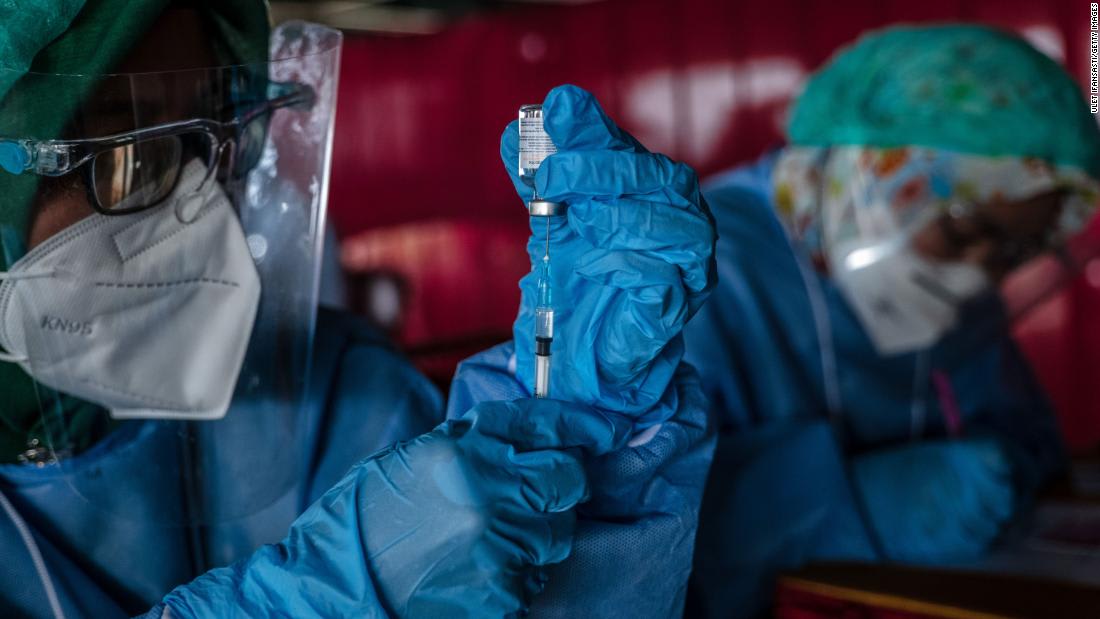 India on Friday crossed 13 million total cases of coronavirus, making it only the third country in the world to do so.

The country reported 131,968 new Covid-19 cases on Friday, the highest single-day rise since the beginning of the pandemic, according to a CNN tally of figures from the Indian Ministry of Health.

India recorded 780 new deaths on Friday, the highest single-day death toll since October 18 last year, according to a CNN tally of figures from the Indian Ministry of Health.

According to Prime Minister Narendra Modi, India is better equipped to handle the caseload during the second wave compared to the first wave. The country needs to focus on micro containment, ramping up testing, quick contact tracing of positive patients and providing treatment, he said Thursday.

“Despite all the challenges, we have better experience, resources and a vaccine. Along with public participation, our hardworking doctors and healthcare staff have helped a lot in handling the situation and are still doing it today,” Modi said at a meeting with chief ministers of states taking stock of the ongoing second wave on Thursday.

Vaccine shortfall: States such as Maharashtra, Odisha and Punjab have complained of vaccine shortages and several districts in Maharashtra have had to suspend vaccination drives, the state’s health minister said Thursday.

According to a senior administrative official in Mumbai, more than 70 centers in the city have said they do not have vaccines available. The central government has said it is doing everything it can to help the states, the health minister said in a statement earlier this week.

Japan recorded 3,405 new coronavirus infections on Thursday, exceeding the 3,000 cases mark for the second day in a row, the Health Ministry announced Friday.

The new cases bring the nationwide tally to 494,440, less than four months ahead of the Olympic Games. The national death toll hit 9,331 Thursday.

The number of patients suffering from coronavirus and in a serious condition stands at 483 as of Thursday, across the country. That’s up from 19 reported on Wednesday.

Japan's rise in cases come as the Tokyo prepares to host the Olympic Games, set to start July 23.

On Monday, Japan's Prime Minister Yoshihide Suga said the rise in cases has not yet reached the level of a nationwide fourth wave, but extra vigilance is required.

Australia has secured an extra 20 million doses of the Pfizer Covid-19 vaccine after declaring it preferable to the AstraZeneca vaccine for recipients under 50.

Speaking Friday, Prime Minister Scott Morrison said a total of 40 million Pfizer doses would arrive in Australia before the end of the year.

"I want to thank Pfizer who have been a very good partner with Australia,” Morrison said. “Particularly given the advice that we received from the Australian Technical Advisory Group on Immunisation yesterday."

On Thursday Australia’s Chief Medical Officer Paul Kelly said the AstraZeneca vaccine should only be given to people under the age of 50 if the “benefit clearly outweighs the risk for that individual's circumstances."

AstraZeneca vaccines continued to be administered to over 50s in Australia on Friday.

Authorities in the state of New South Wales briefly stopped administering AstraZeneca vaccines until it could be determined that all those registered to receive them were eligible under the new guidance.

The number of Johnson & Johnson Covid-19 vaccine shots allocated to states and other jurisdictions by the federal government is expected to drop 84% next week, according to data from the US Centers for Disease Control and Prevention.

This week, nearly 5 million doses of the Johnson & Johnson vaccine were allocated to states and other jurisdictions, but only about 785,000 are slated for next week.

Here are the total allocations for the Johnson & Johnson vaccine to states and other jurisdictions each week, according to data from the CDC:

About 4.5 million people have been vaccinated with the Johnson & Johnson vaccine, accounting for about 7% of people who are fully vaccinated in the US, according to the latest data from the CDC.