Dr. Rochelle Walensky, director of the US Centers for Disease Control and Prevention, said in a White House briefing Friday that Covid-19 cases and hospitalizations are increasing – particularly for younger people – while deaths are going down.

“Deaths have continued to decrease, more than 20% with a seven-day average now of 711,” she said.

Increases in cases and emergency room visits are being seen in younger adults, many of whom have not been vaccinated, Walensky said.

Those aged 18 to 25, 26 to 54, and 55 to 64 have increasing numbers of emergency department visits, she said, while people aged 65 and older have decreasing visits, “likely demonstrating the important impact of vaccination in protecting against disease requiring hospitalization.”

Walensky said that while those are national statistics, the trends are magnified in some areas of the country.

Zients said the surge in resources will include coordinating the administering of existing vaccine doses, offering to send in federal personnel, provide additional testing capacity and offering more therapeutics and treatments.

“When we see metrics trending in the wrong direction, we talk regularly with state officials to offer assistance, including deploying CDC teams to provide their expertise and resources,” Zients said during a White House Covid-19 briefing on Friday.

“With recent increases in cases in some states, we’re intensifying those efforts even further. We will be offering to states with significant increases in cases a set of additional tools to help them to stem the spread, including, first: working with states to ensure they are using all of the doses that they have received. Today, millions of doses have been distributed, but have not yet been administered as shots in arms.”

“Second, we’re offering to surge federal personnel, including CDC response teams, FEMA, DoD and other federal personnel to support vaccinations and get more shots in arms. Third, providing additional testing capacity, including increasing the availability of diagnostic testing, as well as screening in schools and other settings. And fourth, offering more therapeutics and treatments. All of this is on top of the more than three-fold in vaccines that have gone to all states and jurisdictions since the President came into office. For a medium sized state, this translates into hundreds of thousands of additional vaccines each and every week.”

Greece has joined a number of European Union countries in putting restrictions on the use of the AstraZeneca Covid-19 vaccine.

Greece’s National Vaccination Committee has recommended the vaccine only be offered to those aged 30 and over.

The decision follows a warning by Europe’s drug regulator on Wednesday of a slim risk that AstraZeneca’s Covid-19 vaccine could cause rare blood clots.

In a statement, the committee pointed out that despite the restrictions:

“The risk of serious illness and death from Covid-19 is overwhelmingly higher than the risk of thrombosis after vaccination especially in those over 30 years of age.”

After evaluating the available data, the Committee said that “it recommends the continuation of the vaccination program with any available vaccine, including the AstraZeneca vaccine, to individuals aged 30 years and older.”

Ahead of the announcement, Health Ministry Secretary General for Primary Health Care, Marios Themistokleous said he does expect “major changes in our vaccination schedule.”

Speaking on Greece’s public broadcaster ERT Thursday, Themistokleous added there are 10,00 to 12,000 vaccinations with AstraZeneca on a daily basis in Greece and that that public participation during the last week has been over 90%.

Meanwhile, local media are reporting an increase in people not turning up for their AstraZeneca jab appointments.

Greece is experiencing a recent surge in cases while strict measures remain in place.

In an official statement, Johnson & Johnson said that the company is “aware” that there have been thromboembolic events (blood clots) “reported with all Covid-19 vaccines.”

“Our close tracking of side effects has revealed a small number of very rare events following vaccination. At present, no clear causal relationship has been established between these rare events and the Janssen COVID-19 vaccine,” the statement released on Friday said.

J&J said that it is working closely with experts and regulators to take a closer look at the data.

The company said people who get the Covid-19 vaccine and experience any severe symptoms should seek medical assistance immediately.

Symptoms could include shortness of breath, chest pain, swelling in the leg, persistent belly pain, neurological symptoms, excessive or easy bruising, or tiny blood spots under the skin beyond the site of injection.

EMA said there were reports of four serious cases of people who had developed blood clots after they got the vaccine. It is unclear if the clots are connected to the vaccine or related to some other medical issue.

You can find more information on the J&J vaccine here.

EMA said there were reports of four serious cases of people who had developed blood clots after they got the vaccine. It is unclear if the clots are connected to the vaccine or related to some other medical issue.

One case involved a person in a clinical trial, and the three others happened during the US roll out of the vaccine. In one of the cases, the person died, the release said.

The J&J Covid-19 vaccine was authorized for use in the European Union on March 11, but the vaccines have not yet been rolled out there. The EU rollout is supposed to start in the next few weeks. Only the US is currently seeing a supply of J&J vaccines.

The Pandemic Response Accountability Committee is reviewing the blood clot cases and will announce what it has found once the investigation is complete.

The World Health Organization continues to believe that the benefits of the AstraZeneca Covid-19 vaccine outweigh the risk of rare side effects, WHO director-general Tedros Adhanom Ghebreyesus said during a news briefing in Geneva on Friday.

“Even as we work to expand access to vaccines, we’re continuing to keep a close eye on vaccine safety,” Tedros said.

All vaccines and medicines carry a risk of side effects, he said, adding that:

“In this case, the risks of severe disease and death from Covid-19 are many times higher than the very small risks related to the vaccine.”

Earlier this week European and British medicines regulators announced a “possible link” between the AstraZeneca vaccine and rare cases of blood clots, with the UK announcing it would offer people under 30 an alternative vaccine. Later on Wednesday, WHO released a statement saying that “a causal relationship between the vaccine and the occurrence of blood clots with low platelets is considered plausible but is not confirmed.”

“The Covid-19 subcommittee of the WHO Global Advisory Committee on vaccine safety has reviewed available information from Europe and other regions and has said that a causal relationship between the vaccine and the occurrence of blood clots with low platelets is plausible, but more investigation is required,” he said.

“WHO, EMA and MHRA continue to recommend that the benefits of the vaccine outweigh the risk of this very rare side effect.”

National Institutes of Health Director Francis Collins told STAT News that developing a pill to treat Covid-19 as soon as someone is diagnosed is his “dream.”

Collins said “this is an extremely high priority,�� for himself and his colleague Dr. Anthony Fauci, director of the National Institute of Allergy and Infectious Diseases and chief medical advisor to President Biden.

It’s also important for “the Biden administration, to work with these companies to try to make sure that we speed this up,” he said. “This pandemic is going to be with us — even with great vaccines — and people are going to get sick.”

Collins told STAT that a pill like this could have further applications beyond Covid-19.

“What we might end up doing here is curing the common cold,” Collins said. “Then I wouldn’t have to listen to those jokes anymore.”

Vaccine advisers to the federal government tell CNN they don’t foresee AstraZeneca’s Covid-19 vaccine being used in the United States, and even if it were offered, they personally wouldn’t take it, given that other options are available.

European drug regulators said Wednesday there was a possible link between the AstraZeneca vaccine and rare blood clots. Some countries – more than 70 have authorized the shot – have now limited its use.

One adviser told CNN that federal health officials have privately expressed concern that offering AstraZeneca could increase vaccine hesitancy in the US, which is already a problem among some groups.

“I think they’re crossing their fingers that AstraZeneca won’t apply for emergency use authorization,” the adviser said. “This vaccine has a checkered past. There’s baggage. Why go down that road if we don’t have to?”

Pfizer, Moderna and Johnson & Johnson’s vaccines have excellent safety records, with tens of millions of shots without any reported serious side effects.

“Everyone would raise questions. ‘You’re not giving me that new blood clotting vaccine, are you?’ ” another adviser said, referring to AstraZeneca’s vaccine. “Why muddy the waters with a vaccine that comes with a somewhat checkered reputation?”

According to a company statement, the blood clots are an “extremely rare potential side effect.”

Wednesday, Dr. Anthony Fauci told CNN that even if the US Food and Drug Administration granted emergency use authorization to AstraZeneca’s vaccine, there’s no need for it right now in the United States.

“It’s not any indictment against the product. We just have a lot of vaccines,” he said.

A Japanese woman whose lungs were severely damaged by Covid-19 has received what doctors say is the world's first lung transplant from living donors to a recovered coronavirus patient.

Kyoto University Hospital said the woman underwent an 11-hour operation by a 30-strong medical team on Wednesday to transplant lung tissue from her husband and son.

Covid-19 is known to cause severe lung damage in some patients, and people around the world -- including the United States -- have received lung transplants as part of their recovery from the disease.

But the Kyoto hospital said this case was the first in which lung tissue had been transplanted from living donors to a Covid-19 patient.

Dr. Hiroshi Date, a thoracic surgeon at the hospital who led the operation, said it gave hope to patients suffering from severe lung damage from Covid-19.

"We demonstrated that we now have an option of lung transplants (from living donors)," he said at a Thursday news conference.

The patient, identified only as a woman from Japan's western region of Kansai, contracted Covid-19 late last year, and spent months on a life support machine that worked as an artificial lung, according to Kyoto University Hospital.

Covid-19 caused so much damage to her lungs they were no longer functional, and she required a lung transplant to live. 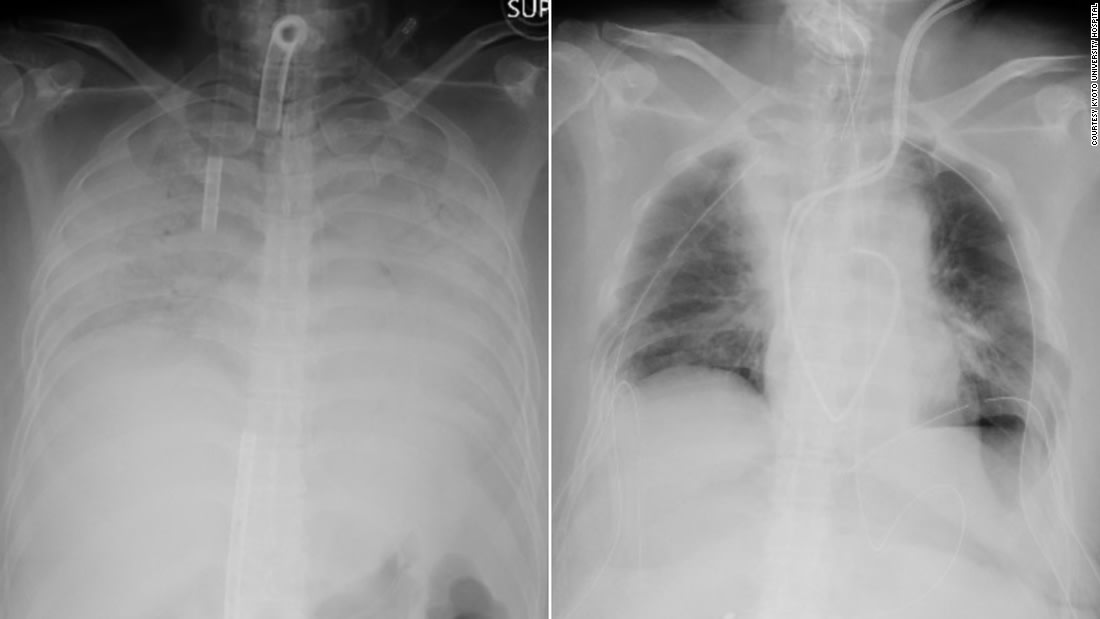