A Phase 3 trial of the diabetes drug Farxiga, also known as dapagliflozin, showed it did not help hospitalized Covid-19 patients, AstraZeneca said in a news release Monday.

The trial did not show statistical significance in preventing organ dysfunction and death in hospitalized coronavirus patients who had other risk factors for severe Covid-19.

The trial was the first to look at a sodium-glucose co-transporter-2 inhibitor, or SGLT2, in hospitalized Covid-19 patients who have risk factors for developing serious complications.

The US Food and Drink Administration (FDA) describes SGLT2 inhibitors as “a class of prescription medicines that are FDA-approved for use with diet and exercise to lower blood sugar in adults with type 2 diabetes.”

“DARE-19 provided important data on the potential benefits and risks of using SGLT2 inhibitors to treat hospitalized patients with Covid-19," said Dr. Mikhail Kosiborod, a cardiologist at Saint Luke’s Mid America Heart Institute and principal investigator of DARE-19, in the release.
"While the trial did not achieve statistical significance, the findings are very interesting and valuable, and will inform future clinical science."

The full DARE-19 trial results will be presented at the American College of Cardiology Scientific Sessions in May, AstraZeneca said.

Hindu devotees packed the streets of Haridwar, in northern India, on Monday for the largest religious pilgrimage on Earth, in scenes that defied social distancing rules just as Covid-19 infections soared in the country.

As many as five million visitors were expected to descend on the city Monday -- an auspicious day in the ongoing Kumbh Mela religious festival, which was delayed this year due to the pandemic.

At the festival, devotees wash away their sins in the river's sacred waters, which are believed to turn into "amrita" -- the nectar of immortality -- on auspicious days like Monday.

At least 650,000 people had already taken a dip in the river by early Monday, according to police Insp. Gen. Sanjay Gunjyal.

Throughout the day, there will be an estimated 11,000 to 18,000 people in the water at any time, spread across the 15 main riverbanks, said Mukesh Thakur, a senior police official.

The massive crowds are causing concern as India struggles to contain a worrying second wave, with cases rising dramatically every day. 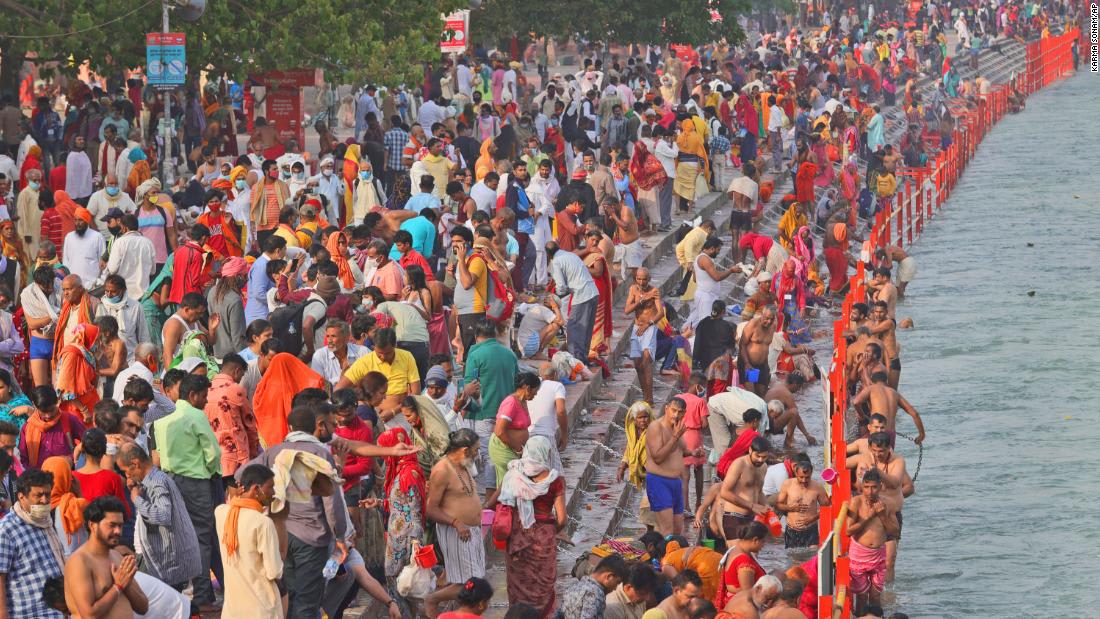 The doses will cover all medical workers and elderly citizens in the country, Suga said.

"It is important to inoculate elderly people, who have a high severity rate (when infected by Covid-19), as soon as possible," he added.

The announcement came as Japan began a mass inoculation program for its 36 million elderly residents aged 65 or above on Monday, according to the Kyodo News Agency.

The agency said the elderly accounted for around 29% of the country's population.

Just 1.1 million people -- less than 1% of Japan's population -- have received at least the first dose of the vaccine as of last Friday, according to official statistics provided by Japan's Ministry of Health, Labour and Welfare.

The country has reported 506,237 cases of Covid-19 in total and 9,369 deaths according to Johns Hopkins University.

As the US races to vaccinate more Americans, Covid-19 cases and hospitalizations are rising, predominantly among younger people who haven't yet gotten a shot.

Some experts worry this might only be the start of what's to come in the next weeks. Michigan is already in the middle of a violent surge, and one epidemiologist says other states should be paying close attention.

"Michigan is really the bellwether for what it looks like when the B.1.1.7 variant... spreads in the United States," Dr. Celine Gounder told CNN on Sunday.
"It's causing a surge in cases and it's causing more severe disease, which means that even younger people, people in their 30s, 40s and 50s are getting very sick and being hospitalized from this."

The B.1.1.7 variant, first spotted in the UK, is now the dominant strain of the virus in the US. Experts say it's more contagious, may cause more severe disease and may potentially be more deadly. And it's rapidly spreading across the country.

Florida has the highest number of cases of the variant, followed by Michigan, Minnesota and Massachusetts, according to data from the CDC. 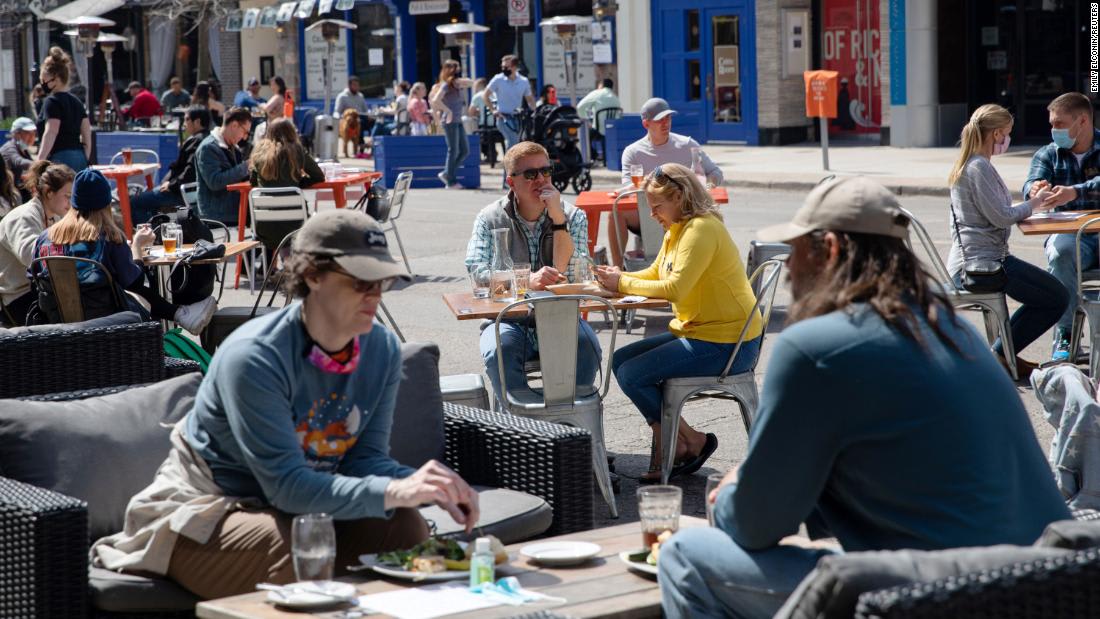 Michigan's Covid-19 crisis could be a sign of what's to come for the US, expert says

Protests broke out Sunday night in Montreal after the city's latest curfew went into effect due to spikes in Covid-19 cases.

The curfew began at 8 p.m. Sunday, according to the Quebec government website. The stricter curfew came after small reopenings and capacity increases made for certain industries in February and March led to an increase in cases. 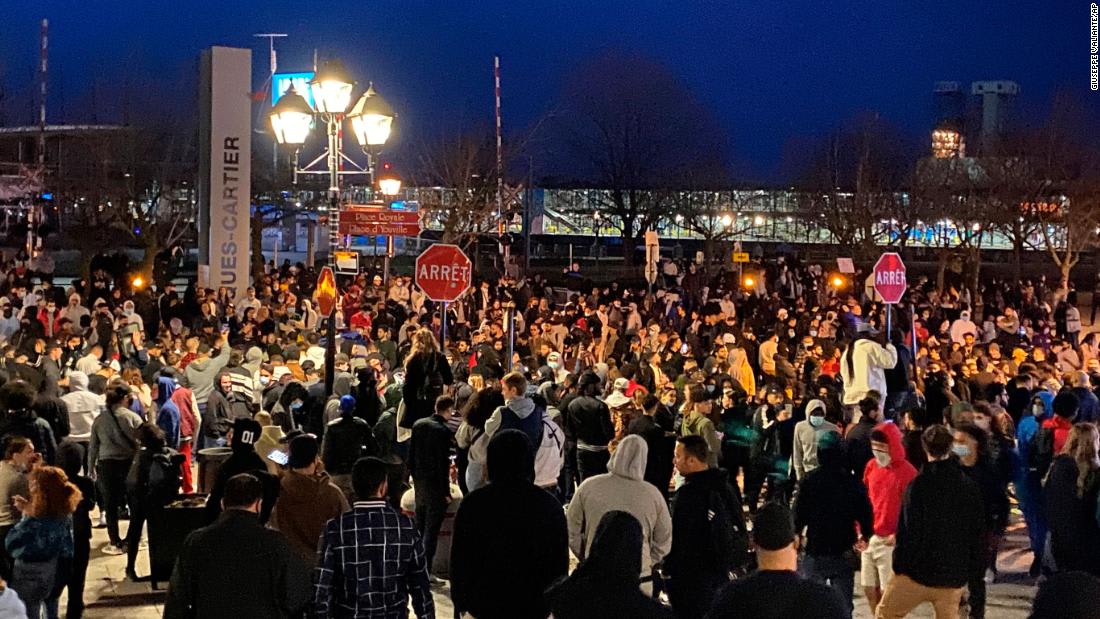 Protests break out in Montreal after the city's latest Covid curfew

Pakistan is in a tight spot: Covid-19 cases are surging during a third wave, hospital beds are filling up, and the government vaccination program is progressing slowly due to delayed deliveries and limited supplies.

So last month, it became one of the few countries to allow the private sector to import and sell vaccines.

Initial sales of the Russian Sputnik V vaccine in the first weekend of April caused a frenzy, with crowds rushing to vaccination centers and queuing for hours for their shot.

Several centers sold out in days. Others that had initially allowed walk-ins switched to online sign-ups after being inundated with people.

Many online booking systems have since been paused, as clinics slowly work through a backlog of inquiries.

At least 562,066 people have died from Covid-19 in the US according to Johns Hopkins University (JHU).

There have been at least 31,197,511 cases reported across the country in total, according to the JHU tally.

At least 237,796,105 vaccine doses have been delivered and at least 187,047,131 have been administered in the US according to the US Centers for Disease Control and Prevention (CDC).

CNN is tracking Covid-19's spread across the US here.

As part of "Step 2" in the country’s exit out of lockdown, non-essential shops, gyms, hairdressers, beauty salons and zoos can reopen -- with Covid-secure measures in place.

Outdoor areas of pubs and restaurants can also reopen from Monday, more than three months after they were forced to close shop.

“I’m sure it will be a huge relief for those business owners who have been closed for so long, and for everyone else it’s a chance to get back to doing some of the things we love and have missed,” Johnson said in a statement.
“I urge everyone to continue to behave responsibly and remember 'hands, face, space and fresh air' to suppress Covid as we push on with our vaccination programme."

The UK has so far administered more than 39 million doses of vaccines, with almost 7 million people fully vaccinated. That's 10.51% of the population, according to data from Johns Hopkins University.

The efficacy of Chinese Covid-19 vaccines is "not high" and authorities are weighing options to bolster protection, China's top disease control official has said.

"The protection rates of existing vaccines are not high," Gao Fu, director of the Chinese Center for Disease Control and Prevention, told a conference in the southwestern city of Chengdu on Saturday.

He listed two options to solve the problem: one is to increase the number of doses, or adjust the dosage or interval between shots; the other is to mix vaccines developed from different technologies.

Gao's remarks are a rare public admission from the country's top health official that the efficacy of China's coronavirus vaccines is not ideal -- and improvements are needed to boost protection.

Danger to credibility: China has positioned itself as a leader in vaccine development and distribution, promoting and supplying its vaccines to countries all over the globe. But the relatively low efficacy rate of its vaccines could hamper credibility and dent Beijing's so-called vaccine diplomacy.

The two pharmaceutical firms that supply the majority of Chinese Covid-19 vaccines to the world have not published comprehensive clinical trial data in medical journals. But interim results announced by the companies show their efficacy falls far behind the new type of vaccines developed in the West that use mRNA to trigger an immune response.

Comments walked back: As Gao's comments gained traction on social media and made international headlines, Chinese censors quickly scrubbed discussions online, and state media swiftly put out an interview with Gao to walk back his comments.

Global Times, a state-run nationalist tabloid, quoted Gao as saying reports about his admission were "a complete misunderstanding."

"The protection rates of all vaccines in the world are sometimes high, and sometimes low. How to improve their efficacy is a question that needs to be considered by scientists around the world," Gao was quoted as saying.