Iraq has just topped 1 million Covid-19 cases for the first time after setting the highest single-day record with 8,696 new cases announced on Wednesday, according to the daily health ministry report.

There are currently 109,447 Covid-19 patients hospitalized across the county, with 517 cases in ICUs.

The country has signed contracts for 16 million more vaccine doses from four companies: Sinopharm, Pfizer/BioNtech, Sputnik V and AstraZeneca, according to the Iraqi health ministry. No dates on when those additional doses will be available have been announced.

"We must rethink our approach in confronting coronavirus, without impacting people's livelihood and their economy," Iraqi government spokesperson Hassna Nadhim told reporters on March 16.

Currently, people are allowed to go outside, but within a 10-kilometer radius from their homes and a nationwide 7 p.m. to 6 a.m. CET curfew is in place.

Attal lauded the vaccination rollout in France and said one in four adults had received a first dose of the vaccine.

President Biden is expected to tout the US administering 200 million coronavirus vaccine shots since he took office, according to two administration officials.

He will deliver remarks on his Covid-19 response and the state of vaccinations at 1:15 p.m. ET today.

Health officials — including Dr. Anthony Fauci — estimate that somewhere between 70% to 85% of the country needs to be immune to the virus — either through inoculation or previous infection — to suppress its spread.

As US health officials race to get more Covid-19 shots into arms to control the virus, experts now warn the country will run into another challenge in the next few weeks: vaccine supply will likely outstrip demand.

"While timing may differ by state, we estimate that across the US as a whole we will likely reach a tipping point on vaccine enthusiasm in the next 2 to 4 weeks," the Kaiser Family Foundation said in a new report published Tuesday.

"Once this happens, efforts to encourage vaccination will become much harder, presenting a challenge to reaching the levels of herd immunity that are expected to be needed."

Health officials -- including Dr. Anthony Fauci -- estimate that somewhere between 70% to 85% of the country needs to be immune to the virus -- either through inoculation or previous infection -- to suppress is spread.

So far, roughly 40.1% of the population has gotten at least one Covid-19 vaccine dose, according to data from the Centers for Disease Control and Prevention (CDC). And about 26% of the population is fully vaccinated, that data shows.

A slowing vaccine demand now, experts say, could give dangerous coronavirus variants the opportunity to continue to mutate, spread and set off new surges -- and it could delay the country's return to a semblance of normalcy. 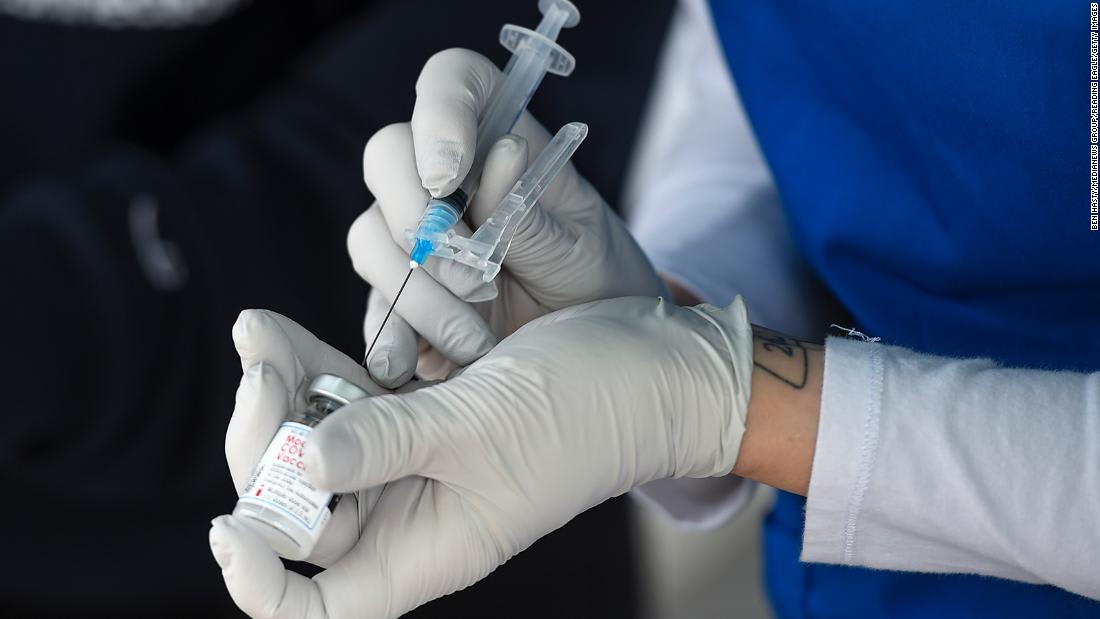 US may soon reach a tipping point on Covid-19 vaccine demand. Here's why that's concerning

The government of the northern Indian state of Uttar Pradesh is arranging buses for migrant workers to return home from neighboring Delhi after the territory announced a week-long lockdown due to the surge in Covid-19 cases on Monday.

“We are making arrangements for 70,000 to 100,000 people to be taken back to their villages,” Siddharth Nath Singh, a Uttar Pradesh government minister told local news on Tuesday.

Singh added that the Delhi government had left them helpless, bringing back memories of similar incidents last year when thousands of migrant workers queued at Delhi's bus terminals in a scramble to return home after India's first lockdown.

After the city announced its latest lockdown, the Delhi chief minister appealed to migrant workers to stay.

“I am hopeful that this is a small lockdown and we won’t need to extend it, stay in Delhi ... I want to assure you that the government will take care of you,” Arvind Kejriwal said Monday.

Thousands of people have been seen heading to railway stations and bus stops in cities like Mumbai and Delhi, which have large migrant populations.

The central government has denied claims that migrant workers are stranded at train stations and bus terminals.

Railways Minister Piyush Goyal said on Tuesday there were no train stations in the country "where migrant workers have come in large numbers or faced any difficulty."

Goyal said "special trains have been operational" and that "there are many tickets available so anyone can book and return home."

The special trains have been operational since June last year, when the country began opening up inter-state transport following several lockdown extensions.

When the nationwide lockdown was imposed in March last year, the country saw tens of thousands of migrants returning home by any means possible, even as inter-state travel was restricted and no transport was available.

The Ministry of Labour and Employment has reactivated 20 control rooms which had been set up in last April to address the grievances of migrant workers, a statement from the ministry on Tuesday said.

At least 22 Covid-19 patients who were on ventilator support died Wednesday in the Indian state of Maharashtra, waiting for oxygen supplies that were lost in an accident, a senior official from the Nashik district said.

Suraj Mandhare told reporters the oxygen was lost due to a leakage from a tanker at the Zakir Hussain hospital on Wednesday.

“There was a valves leakage in tankers in Nashik, it was a large scale leakage, definitely this would impact the hospital where the tankers were headed,” Maharashtra’s health minister Rajesh Tope told reporters Wednesday.

The district administration is coordinating with hospital officials to make oxygen available to patients who need it at the earliest, Mandhare said.

The patients who died required oxygen as their “pressure” was low and the leakage from this shipment meant that they did not receive the supply in time, Mandhare added.

India's Minister of Home Affairs Amit Shah tweeted about the event saying: "I am distressed to hear the news of the accident of oxygen leak in a hospital in Nashik. I express my deepest condolences on this irreparable loss of those who have lost their loved ones in this accident. I pray to God for the health of all the other patients."

Maharashtra has 3,343,359 coronavirus cases and 61,343 deaths, according to the Indian Ministry of Health on Wednesday.

China has administered more than 200 million doses of Covid-19 vaccines, a spokesman of the National Health Commission said at a press conference Wednesday.

Mi Feng said the government would accelerate the pace of vaccination in China as the number of cases outside the country continued to climb.

He added that health authorities would ensure people have access to the second dose of vaccine within eight weeks of their first shot, in response to a reported shortage of vaccines in some locations.

As much as China may want to promote its domestically-produced Covid-19 vaccines, it has to face reality.

Last month, Beijing issued a new policy making it easier for foreigners to apply for a visa to China if they had received a Chinese vaccine -- raising concerns among experts, who warned it risked setting a dangerous precedent which could leave the world separated into vaccine silos.

There was also a practical problem: in many countries, including the United States, it is impossible to get a Chinese vaccine because they have not been approved for use by regulators.

With about half of adults in the US having received at least one Covid-19 shot, many travelers eligible to enter China -- either Chinese citizens or foreigners who managed to obtain a visa -- were left unsure whether the vaccine they received would be deemed sufficient to travel to China.

China's embassy in Washington finally provided some clarity in a recent statement, outlining what tests travelers to China who have received one of the US-approved vaccines -- Pfizer-BioNTech, Moderna and Johnson & Johnson -- should get in order to be approved to enter the country.

With China largely back to business and infection rates low, it is likely many will soon attempt that process, particularly as the number of vaccinated continues to rise in the US.

China considers Pfizer data: Last month, China launched its own version of a vaccine passport, the International Travel Health Certificate (ITHC), to enable immunized people to travel more freely. The country is also moving in the direction of approving more vaccines, including foreign-made ones, which would make it easier for Chinese living overseas and foreigners hoping to travel to China to sign up to the ITHC.

According to the Wall Street Journal, Chinese officials have been scrutinizing clinical-trial data for the Pfizer-BioNTech vaccine, which could be approved for domestic use before July. 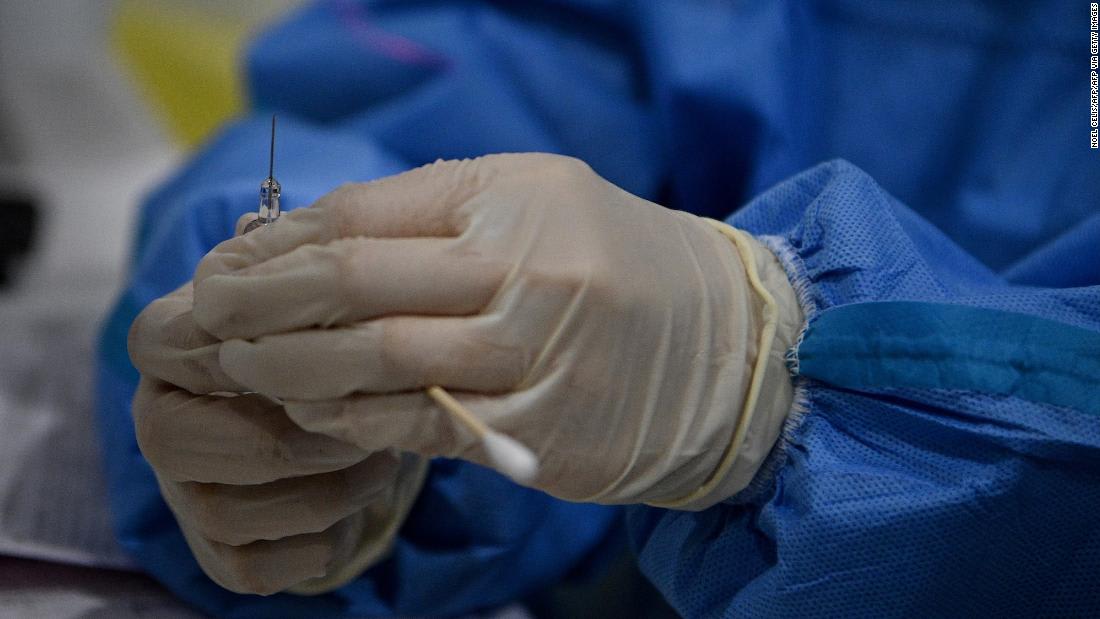 Healthcare and other essential services across India are close to collapse as a second coronavirus wave that started in mid-March tears through the country with devastating speed.

Graveyards are running out of space, hospitals are turning away patients, and desperate families are pleading for help on social media for beds and medicine.

India reported 295,041 cases of coronavirus and 2,023 deaths Wednesday, its highest rise in cases and highest death increase recorded in a single day since the beginning of the pandemic, according to a CNN tally of figures from the Indian Ministry of Health.

"The volume is humongous," said Jalil Parkar, a senior pulmonary consultant at the Lilavati Hospital in Mumbai, which had to convert its lobby into an additional Covid ward. "It's just like a tsunami."

"Things are out of control," said Ramanan Laxminarayan, director of the Center for Disease Dynamics, Economics and Policy in New Delhi.
"There's no oxygen. A hospital bed is hard to find. It's impossible to get a test. You have to wait over a week. And pretty much every system that could break down in the health care system has broken down," he said. 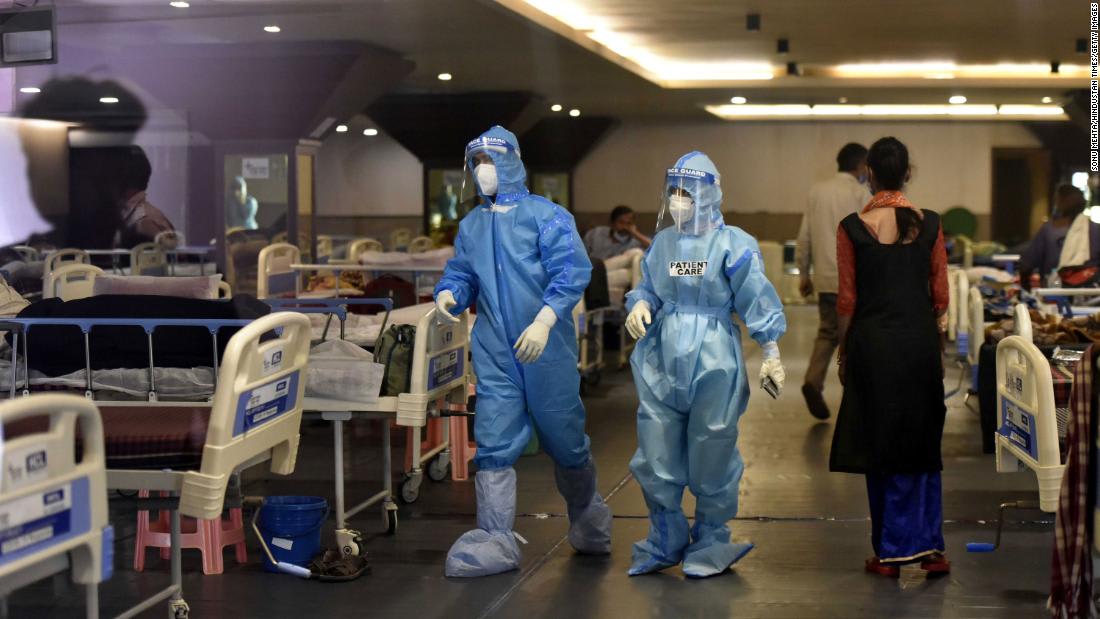