A number of countries have pledged to send oxygen and other medical assistance to India as the country is battling the force of a devastating second coronavirus wave, with hospitals in the capital reporting severe oxygen shortages.

For the past two weeks, medical facilities there have been running out of oxygen and ICU beds, with patients left to die at home and outside hospitals while waiting for care.

On Tuesday, Delhi Chief Minister Arvind Kejriwal said Tuesday that Delhi government is importing 18 tankers of oxygen from Thailand, adding that they are expected to arrive on Wednesday.

“If these 18 tankers start arriving from tomorrow [Wednesday], the issue of transporting the oxygen will be resolved,” he said.

France has also pledged to help, saying that it would begin sending medical aid to India by the end of this week, according to a press release from the French Ministry of Foreign Affairs on Monday.

Eight medical oxygen production units, each of which will be able to make an Indian hospital autonomous in oxygen for ten years, will be part of the shipment. Liquefied oxygen containers and “specialized medical equipment,” --  in particular 28 respirators and their specific supplies -- will also be part of the shipments, the press release said.

“In response to the needs expressed by the country's authorities, this material is intended to respond to the emergency but also to significantly and sustainably strengthen the capacities of Indian hospitals to treat the sick and fight the pandemic,” the French foreign ministry said.

France and India have always stood in solidarity with each other in difficult times. This solidarity is at the heart of our strategic partnership and of the friendship between the French and Indian peoples,” it said.

Kejriwal said on Tuesday that Delhi is “importing 21 ready-to-use oxygen plants from France” which “can be brought in to be used immediately.” They will play a part in “in resolving the oxygen crisis in those hospitals,” he said.

Ireland became one of the first to confirm “concrete support” for India on Monday, according to Minister for Foreign Affairs Simon Coveney. The Irish health minister announced that Ireland would send 700 oxygen concentrators -- which were originally purchased by the Irish health service as part of their pandemic planning.

Meanwhile, South Korea’s Foreign Ministry said it was looking to help its citizens in urgent need with medical oxygen concentrators on Tuesday, while also planning to send medical and Covid-19 supplies like testing kits to the country.

Foreign Ministry spokesperson Choi Young-sam said in a briefing Tuesday that the Foreign Ministry were closely communicating with the embassy and consulates in India to secure the safety of South Korean citizens.

A total of 20,201 cases and 380 deaths were recorded in Delhi on Monday evening, according to a bulletin issued by the local health department.

India’s Election Commission has banned all election victory processions on May 2, marking the latest move by authorities to tackle the country's current Covid-19 crisis.

The Indian states of Tamil Nadu, Kerala, West Bengal, Assam -- and the union territory of Puducherry -- went to the polls on March 27, with voting taking place across eight phases and ending on April 29.

All votes will be counted on May 2, with the results announced on the same day.

"Not more than two persons shall be allowed to accompany the winning candidate or his/her authorized representative to receive the certificate of election from the Returning Officer concerned," an Election Commission notification said on Tuesday.

Amidst a brutal second wave of the pandemic, Prime Minister Narendra Modi and his Bharatiya Janata Party (BJP) have come under fire for holding several rallies in West Bengal, with thousands in attendance between March and April.

Last week, the BJP said it would no longer hold large election rallies there, citing a “difficult phase of the pandemic." Instead, they announced they would hold "small public gatherings," with a with a cap of 500 people, according to a BJP statement.

India reported 323,144 new cases of coronavirus on Tuesday, bringing the total number of cases to 17,636,307, including 197,894 deaths, according to a CNN tally of figures from the Indian Ministry of Health.

On April 22, India recorded the highest daily increase of cases in the world since the start of the pandemic with 314, 835 new Covid-19 cases, and continued to top the global record for five consecutive days.

In February, it seemed like India had gotten Covid-19 under control, with daily cases falling nearly 90% from the peak of the first wave last year.

Now, the country is experiencing the world's worst outbreak. India reported 323,144 new cases of coronavirus on Tuesday, marking the first time in a week that cases have dipped after hitting record highs, according to a CNN tally of figures from the Indian Ministry of Health.

On the ground, these numbers translate to heart wrenching tragedy. Photos show grieving families dressed in full protective suits at mass cremations, performing last rites surrounded by dozens of other burning funeral pyres. Hospitals have run out of basic medical supplies, with many patients dying due to oxygen shortages. Family members are driving from clinic to clinic, frantically searching for open ICU beds for their loved ones.

The government has been scrambling to respond to the crisis, with countries around the world offering aid. But for now, the outbreak shows no signs of letting up, and experts warn it could get even worse.

"I'm afraid this is not the peak," said Dr. Giridhara R. Babu of the Public Health Foundation of India on Monday. "The kind of data that we see, (we are) at least two to three weeks away from the peak."

Others say India may be approaching the peak now, sooner than Babu's estimate -- but with so many ill and so few supplies available, the country will see many more deaths before the second wave subsides.

Read more about the crisis in India: 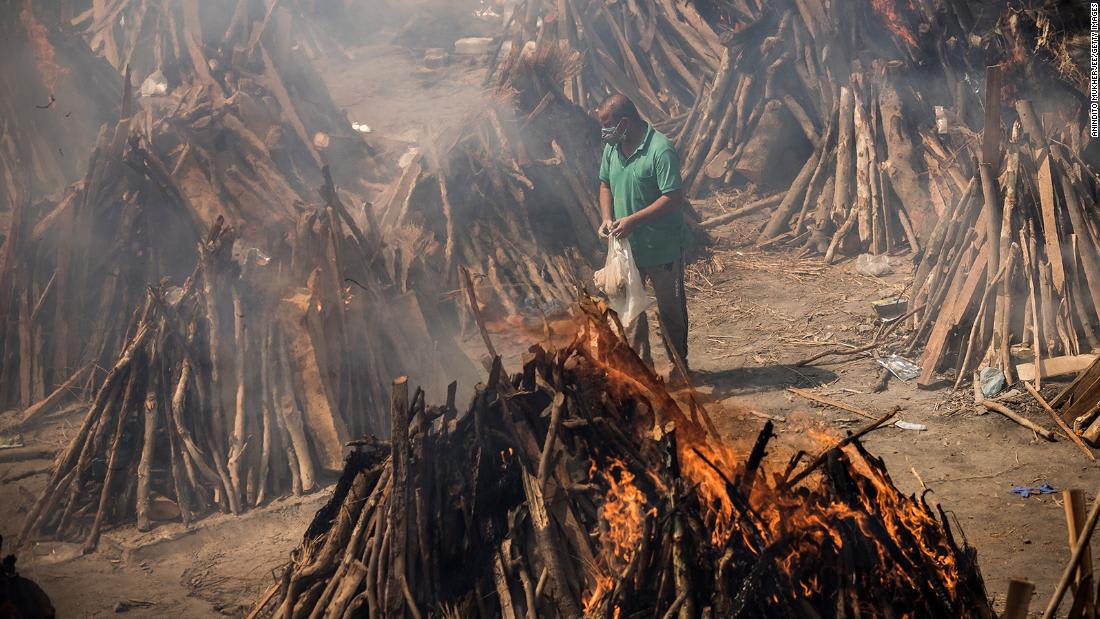 India is spiraling deeper into Covid-19 crisis. Here's what you need to know

President Joe Biden is expected to announce Tuesday that the US Centers for Disease Control and Prevention has updated its guidance for wearing masks outdoors, three people familiar with the expected announcement said.

One of Biden's top coronavirus advisers, Dr. Anthony Fauci, strongly hinted that the guidance would be updated this week, telling CNN's Jim Acosta Sunday he didn't want to get ahead of the CDC, but they "will be coming out with updating their guidelines of what people who are vaccinated can do and even some who are not vaccinated."

The Biden administration is also expected to announce, as early as Tuesday, several other new recommendations for fully vaccinated people in addition to "unmasking outdoors," a federal official told CNN.

A November review in the Journal of Infectious Diseases found that the odds of viral transmission are 18.7 times greater indoors than out, and less than 10% of Covid-19 infections studied occurred outside. Despite that, several states still have outdoor mask mandates in place. 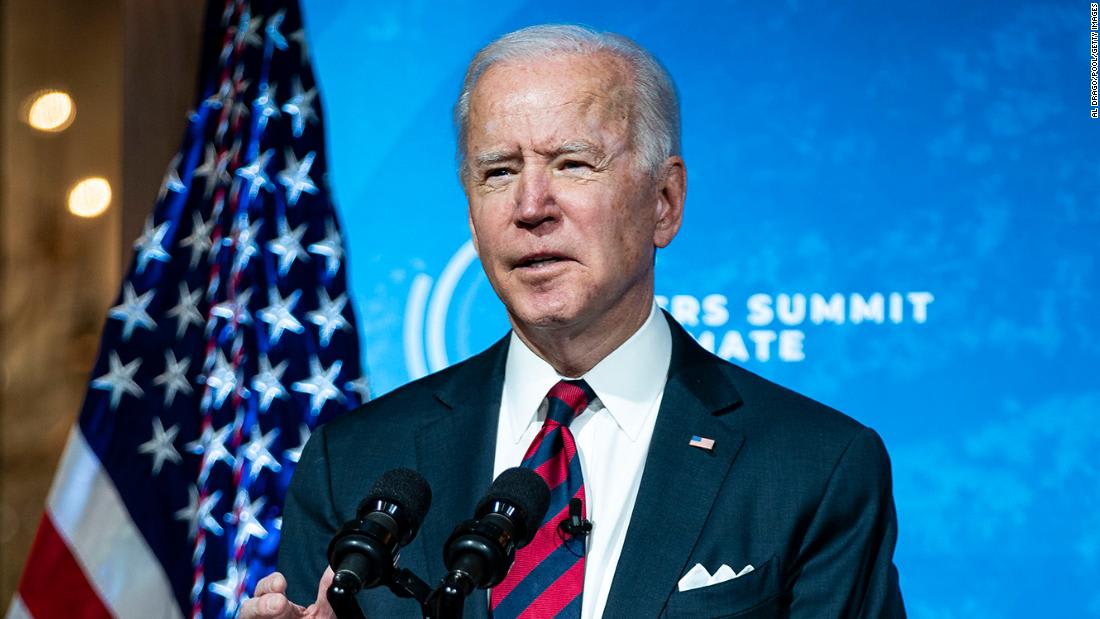 The United States plans to share millions of doses of AstraZeneca's coronavirus vaccine with other countries in the coming months, the White House announced on Monday.

Psaki indicated that the decision was made because of the US' available supply of other Covid-19 vaccines approved for use. The US has tens of millions of AstraZeneca vaccines stockpiled but none have been used because it has not yet been granted emergency use authorization by the US Food and Drug Administration.

Psaki said the FDA will conduct a quality review of doses before they can leave the country and that the US' plan to distribute the vaccine is still being developed. The White House has not said which countries will get the vaccine.

A senior administration official said later on Monday that there could be up to 60 million doses of the AstraZeneca vaccine available to be shared with other countries in the next two months, assuming the FDA issues an emergency use authorization for the vaccine.

Some context: Multiple world leaders have pressed US President Joe Biden to share doses as other countries have struggled to ramp up vaccinations. One of those countries is India, which is currently going through one of the worst Covid surges in the world.

Biden and Indian Prime Minister Narendra Modi spoke on Monday. Modi did not make a specific request for vaccines when he spoke with Biden, according to senior administration officials. 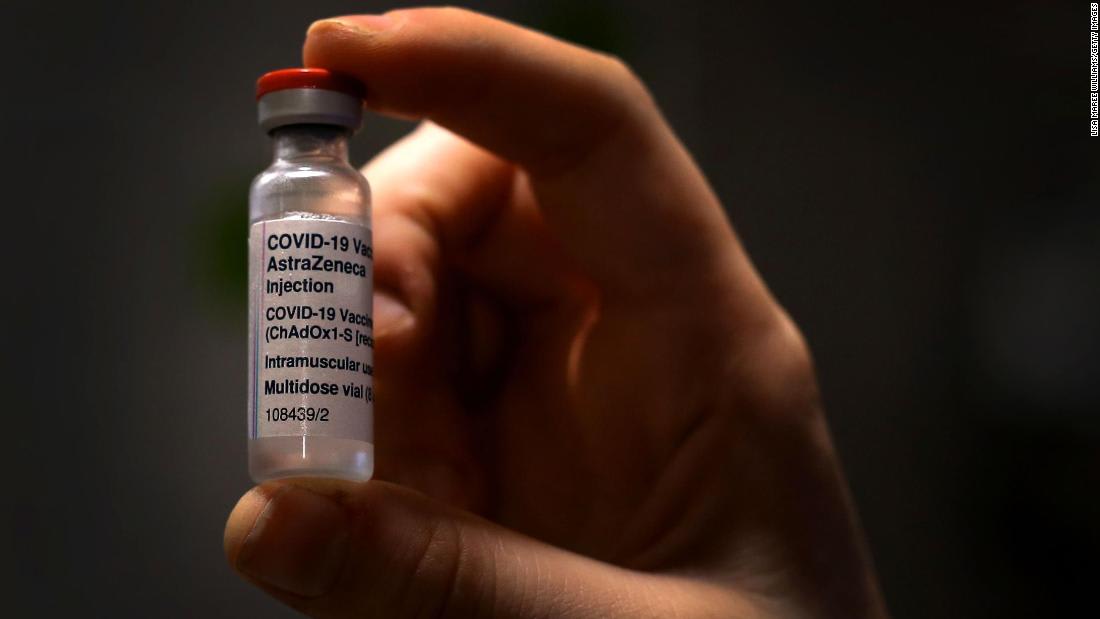