Several Indian states were forced to postpone their Covid-19 vaccination plans on Saturday due to supply shortages, authorities said.

At least seven states or union territories were impacted by vaccine shortages as confirmed by CNN. These include the states of Telangana, Andhra Pradesh, Punjab, Gujarat, Madhya Pradesh, Gujarat, Maharasthra and the union territory of Delhi, which includes the Indian capital, New Delhi.

India launched its vaccination drive on January 16, first prioritizing heath care and frontline workers, followed by people above the age of 60 and those over 45 with existing health conditions. The drive was expanded to include everyone above the age of 18 on Saturday.

India is facing a massive second wave of Covid-19 cases, reporting more than 400,000 in a single day on Saturday.

A total of 1,648,192 vaccine doses were given until 8 p.m., including 989,700 people who were given their first dose and 658,492 people who received a second dose, according to provisional figures in the press release.

Of those, 84,599 people between the ages of 18 and 44 received their first dose of a coronavirus vaccine, according to a press release issued by India’s Health Ministry on Saturday night. Fewer young people received vaccines because some states prioritized second doses and older people who hadn’t had their first dose.

As of Saturday evening Indian time, a total of 156,637,825 vaccine doses have been administered since January across the country. A total of 28,591,381 people have received their second dose, about just under 2.2% percent of the country’s 1.3 billion population.

At least 3,689 Covid-19 deaths were reported in India on Sunday, the highest number identified in a single day since the beginning of the pandemic.

To date, at least 215,542 people have died. according to figures released by the country’s health ministry.

More than 243 million Covid-19 doses have been administered in the US, according to data published Saturday by the US Centers for Disease Control and Prevention.

That’s about 3,303,794 more doses reported administered since Friday, for a seven-day average of about 2.5 million doses per day.

Data published by the CDC may be delayed, and doses may not have been given on the day reported.

The White House announced Friday that 100 million adults in the United States are now fully vaccinated.

The news comes as CNN reported that Biden's coronavirus advisers are moving into the next phase of their response, from ramping up availability of Covid-19 vaccines to reaching those who have not yet gotten the shot.

White House officials have three overarching goals for the next 100 days:

The Biden administration doubled and surpassed its initial goal of 100 million Covid-19 vaccine doses administered in its first 100 days, reaching the 200 million benchmark on April 21. It has been racing to get shots in arms as variants spread throughout the country.

The White House has poured resources into educating the American public about the safety and efficacy of the three Covid-19 vaccines that have received emergency use authorization by the US Food and Drug Association.

The Biden administration has launched TV ads to encourage vaccinations and increase public confidence in the vaccines as it ramps up distribution.

It also announced nearly $10 billion would be allocated toward increasing vaccine access and confidence in hard-hit communities across the country, which includes $3 billion of CDC funding to support outreach efforts in the states through community-based organizations and trusted community leaders.

Biden has said there will be enough vaccine for every adult American by the end of May. Every American over the age of 16 is now eligible for a Covid-19 vaccine across the country.

India's government locked down the country last year to avoid an out-of-control Covid-19 outbreak that so many of the world's countries had endured. The plan was largely successful, but it crippled India's economy in the process.

Now India is facing its own devastating Covid-19 crisis, and Prime Minister Narendra Modi is reluctant to put his economy through another round of turmoil.

India's economy may get crushed again regardless.

That's beginning to play out in India's leather industry.

Last year, the pandemic dealt a serious blow to India's leather industry. Leather exports slumped a steep 29.1% last year over the prior year, as the industry lost almost $1.4 billion in exports. That's because shoppers in the United States, European Union and United Kingdom held off on purchases during their own lockdowns, according to Aqeel Panaruna, chairman of the Council for Leather Exports.

One industry expert, who didn't want to be identified and is also infected with the coronavirus, said leather producers have suffered from a cumulative knock-on effect of a protracted shutdown last year. He's worried that a worsening second wave could set the industry back once again.

Much of that worry is fueled by the dynamics of the industry's workforce.

"The majority of the workforce is in the 18 to 45 years of age and have not been vaccinated as yet," noted Sanjay Leekha, vice chairman of CLE.

Read the full story below: 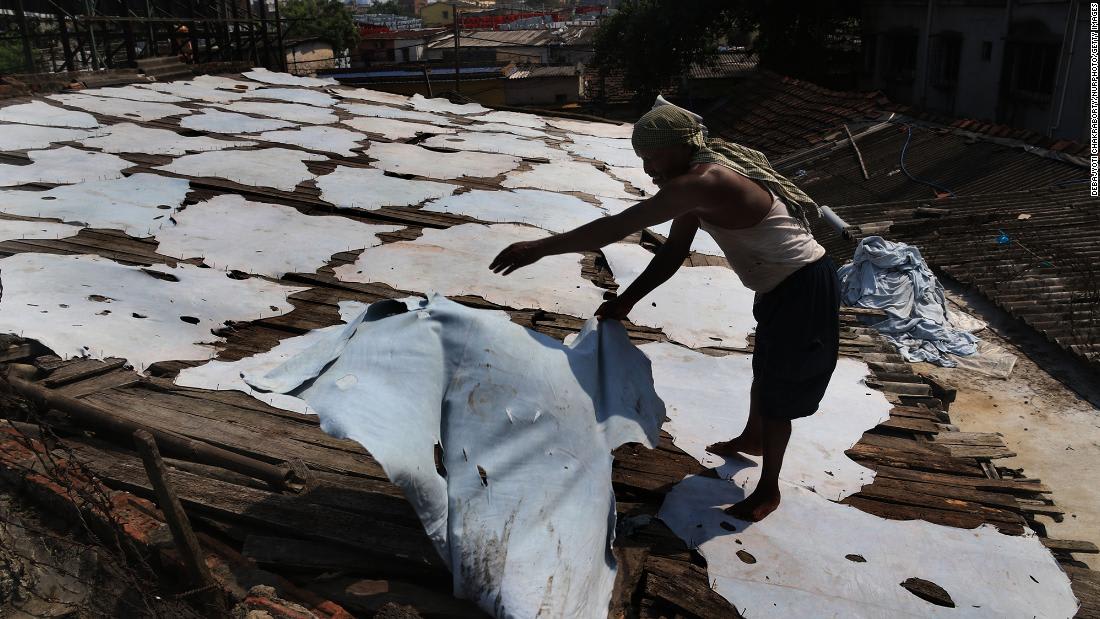 India doesn't want to shut down its economy again. It may get crushed anyway