The single day positivity rate for Covid-19 in the state of New York dropped to 1.49% on Saturday, marking the first time it's been below 1.5% since October 28, Gov. Andrew Cuomo announced on Sunday.

Along with daily and weekly averages dropping, the number of hospitalizations, ICU patients and intubations have decreased to the lowest rates since the end of last year.

"More New Yorkers are getting vaccinated and hospitalizations are declining, which is good news, but we need New Yorkers to stay vigilant to make sure we don't lose any of the progress we've made," Gov. Cuomo said.

"Washing hands, wearing masks and staying socially distanced are critical behaviors each of us can practice, individually and in our communities, to slow the spread."

"Spring is here and we're making progress, but there's a way to go before we reach the light at the end of the tunnel," he said.

According to a press release, from Sunday, 2,849 New Yorkers tested positive and there were 33 Covid-19 related deaths in New York state on Saturday.

Nepal will ban all commercial flights originating from India, Brazil and South Africa starting from midnight Wednesday until May 14, the country's Health Minister Hridayesh Tripathi told CNN on Sunday.

The government also decided to suspend all commercial domestic flights from midnight Monday, the minister said.

As India continues to grapple with an unrelenting second wave of Covid-19, its neighbor Nepal is seeing its own surge in case numbers, which prompted the Nepali government to seal its land border with India.

The tiny South Asian nation on Sunday registered 7,137 new coronavirus infections – the highest single-day rise in cases since the pandemic began, according to its health ministry. Additionally, it reported 27 new deaths related to the virus.

Nepal had seen case numbers begin to fall in February, with newly identified cases hovering between 50 to 100 each day. But infections erupted in mid-April as India's second wave picked up speed — and daily cases are now in the thousands.

The country, which has identified cases of the Indian variant, has a limited health care infrastructure and access to life-saving resources, raising fears it is ill-equipped to deal with a massive outbreak like the one ravaging India.

On Thursday, Nepali authorities imposed a two-week lockdown in capital city Kathmandu in efforts to curb the spread of Covid-19.

Dr. Scott Gottlieb, former commissioner of the US Food and Drug Administration, said on CBS’s "Face the Nation" Sunday that Covid-19 travel restrictions from India could serve a purpose, but what the purpose is needs to be clear.

On Friday, the Biden Administration issued a proclamation restricting travel from India.

Gottlieb said that he wasn’t sure what the travel ban was trying to accomplish.

The travel restrictions could serve a purpose, he said, but what the purpose is needs to be clear.

He noted that there are still restrictions in place against travel from China and the United Kingdom, saying “that doesn’t make a lot of sense. So, I’m not really sure what the overall strategy is around these continued travel restrictions that we have in place.”

Dr. Jonathan Reiner, CNN medical analyst and professor of medicine and surgery at George Washington University, said on "Inside Politics Sunday" that he thinks the US Centers for Disease Control and Prevention has been too cautious when it comes to its guidelines.

“They’ve been both very competent since the new administration took over and very cautious,” Reiner said of the CDC. “And I think too cautious.”

Reiner said that there was no one more stringent about masks than he was for the first 12 months of the pandemic, but now he can say “with certainty” that if someone is fully vaccinated then they are very well immune, no longer need masks in public and can go into places without masks.

“It’s time for the CDC to start embracing this kind of bifurcated strategy and perhaps giving the unvaccinated a hint of what life can be like if they become vaccinated,” he said.

Reiner added that getting vaccinated is a "patriotic duty."

“That’s really the message. And the message to the public is yes, if you get vaccinated, you will not die from this virus, you will not transmit the virus to someone either you love or just a random stranger,” Reiner said.

Although we're closer than ever to resuming life as usual in the United States, globally, the end of the pandemic is horrifyingly far away. India is now the epicenter of the worst ongoing coronavirus outbreak, and the situation there could get worse before it begins to get better.

Despite hope in the United States, where the situation is likely to be much better by summer and at the new normal in the fall, we can't be blinded by the light at the end of the pandemic tunnel. India's surge is a reminder that the virus is learning and adapting to us faster than we are learning and adapting to it. The pandemic is more severe than ever and, fueled by variants, is an ongoing and increasing risk. If we get our response right, we can save more than a million lives in the coming year.

Dazzling scientific progress resulted in rapid development of Covid vaccines that are more effective than many experts dared to hope. But although Israel, the UK, and, soon, the US will enter a new reality with the virus largely tamed by vaccines, global vaccination lags badly. Even in the best of circumstances, vaccines will take months to control the virus. And we are far from the best of circumstances.

Globally, vaccines would not crush the curve in the short-term even if there were enough of them -- which there aren't. There is still not enough vaccine in most countries, and low-income countries in particular lack sufficient vaccine. The virus and its variants are gathering strength and speed. Global cooperation is essential if we are to win our continuing war against Covid.

Dr. Tom Frieden, director of the US Centers for Disease Control and Prevention during the Obama administration, when he oversaw responses to the H1N1 influenza, Ebola and Zika epidemics, is President and CEO of Resolve to Save Lives, an initiative of Vital Strategies and Senior Fellow for Global Health at the Council on Foreign Relations. Twitter: @DrTomFrieden. 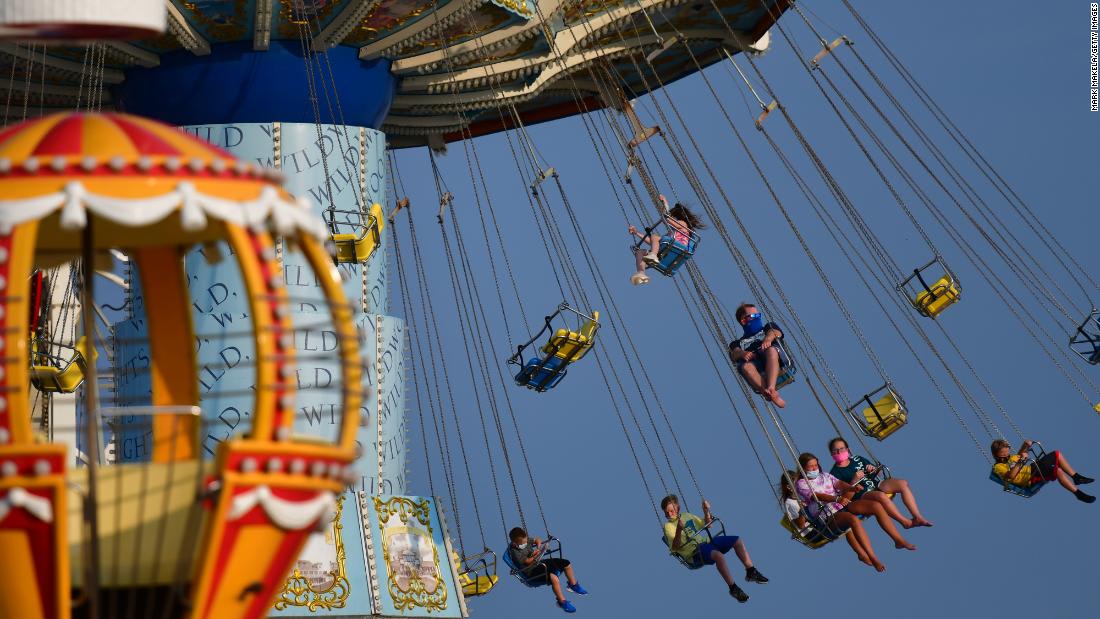 India’s northern state of Haryana will be under a complete lockdown until May 10, the state’s health minister announced Sunday.

Nine districts in the state were under lockdown last week, and the state government announced on Sunday an extension to cover the entire state until next Monday.

"This is a situation that we have been experiencing for over one year, we have changed our lives according to this situation," M.L Khattar, chief minister of Haryana, told local reporters on Sunday.

Haryana is the latest state to impose a strict lockdown as the second wave of Covid-19 has wreaked havoc across India.

On Saturday, Delhi chief minister Arvind Kejriwal extended the lockdown in the nation’s capital by one week until May 10.

The UK will help India with “whatever we can, whatever they ask for,” Foreign Secretary Dominic Raab said on Sunday, just days after the country's Health Secretary Matt Hancock said the UK had no excess vaccine doses to donate.

Raab, who appeared both on Sky News and the BBC on Sunday morning, said the UK was “doing everything that our Indian friends need in their hour of need.”

Raab’s assurances contradict comments made on Wednesday by Health Secretary Matt Hancock, who said the UK had no excess vaccine doses it could send to the beleaguered former British colony. The UK is currently vaccinating people age 40 and over. Government data shows 65% of all adults have had at least one dose of the vaccine. Meanwhile, India has fully vaccinated only 2% of its population, with 9% receiving one dose so far.

Raab noted he had not been contacted about providing additional vaccine doses. “I haven’t had a request, I can tell you, on that specifically,” he said, listing the steps the UK has made:

We’ve given them oxygen concentrators. We’ve given them ventilators. We’re going to be sending out another package of 1,000 ventilators very shortly. We’ve also looked at these oxygen generators, like mini-factories. That’s the thing they need right now.

Raab also said he is in regular contact with counterpart, Minister of External Affairs Subrahmanyam Jaishankar, and that they are due to meet on Monday.

“The Indian relation is very important to us, and obviously we want to cooperate very closely together. Right throughout this crisis we’ve said we need to keep supply chains, particularly critical supply chains, open, and we ought to resolve these kind of issues through collaboration, and that is certainly what we’re doing with the Indians.”

The reassurances from Raab come as the UK continues cutting foreign aid funding.

UNICEF said Saturday it was “deeply concerned” by the UK government’s decision to reduce its core funding to the organization by 60%, saying the cuts “will have serious consequences for children.”

Last week, the United Nations Population Fund slammed the UK for a similar decision to cut 85% of the aid it had pledged to the UN’s family planning program, describing it as "devastating for women and girls and their families across the world."

British Prime Minister Boris Johnson said his government had to “economize” on international aid due to the coronavirus pandemic.

When the European Union recently announced that vaccinated Americans will be allowed to enter the EU this summer, many US travelers celebrated, eager to dust off their passports for a long-awaited trip abroad.

But for many families in the EU separated from loved ones in non-EU countries -- some for a year or longer -- by those same border entry restrictions that will soon be lifted for some tourists, the news exacerbated feelings of outrage and isolation that have been building for many months.

Increasingly, frustrated families are speaking out via movements such as Family Is Not Tourism.

The initiative has gathered more than 20,900 signatures on its Change.org petition to lobby European Union governments to lift entry bans on third-country family members, saying such travel restrictions "[go] against the letter and spirit of EU legislation."

When the US Centers for Disease Control and Prevention recently reported that almost 8% of the millions who have received the first dose of a Covid-19 vaccine hadn't returned to get the second shot they need, it raised concerns that the country might be unable to reach herd immunity.

But health experts say what's most surprising is how low that number is, and that it points to the need to inform people about the importance of that second shot for their own protection and that of others in a pandemic -- and to let them know that it's not too late to get it.

Two of the vaccines in use in the United States -— the Pfizer/BioNTech and Moderna vaccines — require that people get a second dose to get the maximum protection the vaccines can provide.

It's not unusual for people to forgo a required second shot of a vaccine, health experts say.

The skip rate for the second shot of the vaccine that prevents shingles, for example, was about 26% among Medicare beneficiaries, according to a Kaiser Family Foundation analysis. 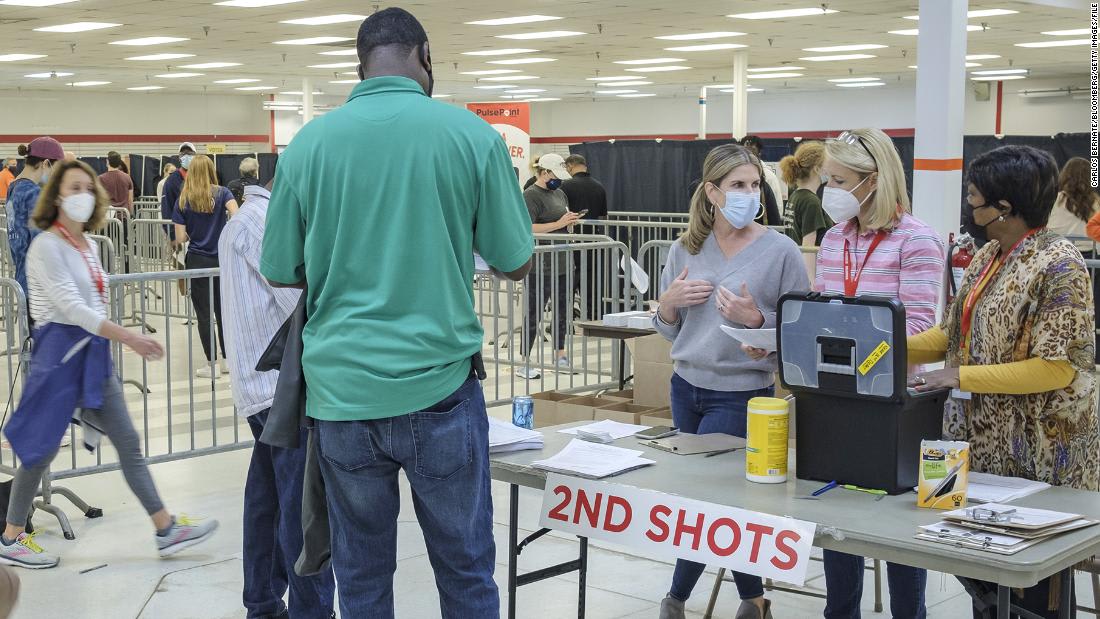