Pfizer expects to file for full US Food and Drug Administration approval of its Covid-19 vaccine for 16-to-85-year-olds by the end of May, the company said during its first quarter 2021 earning teleconference Tuesday.

“While we are currently distributing our vaccine in the US under an Emergency Use Authorization (EUA), we expect to submit this month a Biologics License Application (BLA) to the US Food and Drug Administration (FDA) seeking full approval for our Covid-19 vaccine for individuals 16 years of age and older,” Pfizer CEO Albert Bourla said in his remarks.

The United States is providing more than $100 million worth of aid to India, including oxygen supplies and "critical PPE and therapeutics," a US Embassy spokesperson in New Delhi told CNN.

“The United States is rapidly mobilizing assistance to save lives, stop the spread of COVID-19, and meet the urgent health needs of the Indian people," the spokesperson said.

Five of six planes filled with aid supplies have already arrived in India and more shipments are on the way, the spokesperson added.

"At the request of the Government of India, USAID provided these urgently needed supplies to the Indian Red Cross to ensure that they reach those most in need, as fast as possible," the embassy added.

The spokesperson deferred questions about deployment and use of materials to the Indian government.

Delhi's deputy chief minister has asked India’s Ministry of Defense to deploy military aid to help manage the Covid-19 crisis unfolding in Delhi -- and across India.

Delhi needs at least 10,000 oxygenated non-ICU beds and 1,000 ICU beds, Sisodia said, explaining that the armed forces could help “to set up, operationalize and run” some of those facilities.

“Since the entire health infrastructure machinery is overwhelmed with the management of existing hospitals and the upcoming Cover Hospitals/Care Centers, it will be a timely help to the people of Delhi if the Ministry of Defense, with the considerable resources at its command, is tasked with the responsibility to provide and man the additional Covid health facilities,” Sisodia wrote in the letter.

Sisodia has requested for the Armed Forces to provide cryogenic tankers to transport liquid oxygen and for medical and paramedical teams “to supplement the medical manpower of Delhi.”

Sisodia told CNN that he has not yet received a response to his letter, but that the defense minister is examining his request.

Eight Asiatic lions housed in a zoological park in a southern Indian state tested positive for Covid-19 last month, according to the Indian government.

The Nehru Zoological Park in Hyderabad collected samples after the animals showed signs of respiratory distress.

"The eight lions have been isolated -- and due care and necessary treatment has been provided. All the eight lions have responded well to the treatment and recovering," read a statement from the Ministry of Environment, Forest and Climate Change.
Further analysis of the samples showed that the infection was not caused by any variant of concern, the statement said.

The Nehru Zoological Park is currently closed to visitors and an advisory has been issued to other institutions that house animals.

"Based on experience with zoo animals elsewhere in the world that have experienced SARS-COV2 positive last year, there is no factual evidence that animals can transmit the disease to humans any further," the ministry said.

In a statement issued on Thursday, the European Medicines Agency (EMA) said:

“The CHMP’s [human medicine’s committee] decision to start the rolling review is based on preliminary results from laboratory studies (non-clinical data) and clinical studies. These studies suggest that the vaccine triggers the production of antibodies that target SARS-CoV-2, the virus that causes COVID-19, and may help protect against the disease.
The statement added that they will "evaluate data as they become available to decide if the benefits outweigh the risks. The rolling review will continue until enough evidence is available for a formal marketing authorisation application.”

The rolling review process will enable the EMA to evaluate the Sinovac vaccine more quickly, it said, but added that it “cannot predict overall timelines.”

The EMA said it will communicate when the marketing authorization application has been submitted by the company.

Screams pierce the air as their loved ones take their final breaths. Others sit on the floor gasping to fill their lungs.

CNN's Clarissa Ward went inside a coronavirus ward at a hospital in India's Uttar Pradesh state, where five doctors are struggling to treat more than 100 patients but there are only 55 beds.

"I'm getting anxious. No one is listening to me here," she said. "I'm unable to breathe freely. No one is taking care of me."

A family desperately tried to care for their 55-year-old mother in the ICU. They said they had been in the hospital for six days before getting a ventilator and had to bring their own oxygen cylinder.

The woman later succumbed as the family cried out in anguish. Her body was left in the intensive care unit for nearly an hour before it was moved.

The hospital administrator, Dr. Gyanendra Kumar, said the supply of oxygen isn't the problem, but they are too short-staffed.

A group of men wearing masks but no other personal protective equipment tell Ward that they move about 12 bodies per day.

"We should be wearing proper PPE," one said, "but even the doctors don't have it, so how can we?"

The Indian government has put into place a “streamlined mechanism” for allocating aid received from international actors in its ongoing fight against a deadly second Covid-19 wave.

The health ministry said in a Tuesday statement that nearly 4 million items from 24 different categories -- including medical equipment, oxygen concentrators and ventilators -- have been distributed across 86 healthcare facilities across the country.

“The global community has extended a helping hand in supporting efforts of Government of India in this collective fight against the  global Covid-19 pandemic," the statement read.
“A streamlined and systematic mechanism for allocation of the support supplies received by India has been put into place, for effective distribution of the medical and other relief and support material,” it added.

The health ministry also said that in light of oxygen shortages in hospitals, customs are “working 24/7 to fast track and clear the goods on arrival and lead to expeditious clearance within hours," noting that basic customs duty and health tax are being waived for goods identified in the fight against Covid-19.

All items received as donations via the Ministry of External Affairs (MEA) are being received by the Indian Red Cross Society, who in turn liaises with its customs agent, HLL Lifecare Limited (HLL), and the health ministry, it said.

Donations are being prioritized and distributed according to a state’s Covid-19 caseload and as per their requirements. Considerations are also going into whether or not a state is considered a regional medical hub, with donations also allocated to states with lower resources, or areas that are remote, it said.

Countries including Belgium, France, Germany, Russia, Thailand, the United Kingdom and the United States have sent aid supplies to India.

The eastern Indian state of Bihar is entering a state-wide lockdown until May 15.

"After discussion with associate ministers and officials yesterday, it was decided to implement the lockdown in Bihar uniil May 15, 2021. Based on detailed guidelines and other activities, today, the crisis management group has been instructed to take action."

Kumar did not indicate when the lockdown would officially go into effect.

Bihar is the latest Indian state to enforce a lockdown as the country attempts to quell the country's deadly Covid-19 surge.

Across other Indian regions, the following restrictions are already in place or have been planned:

The number of coronavirus cases in India has now crossed 20 million, with 357,229 cases recorded on Tuesday, according to the health ministry.

The UK is hosting the first face-to-face gathering of the G7 foreign ministers in two years, with the Group of Seven meeting on Tuesday at Lancaster House in London, with Covid-19 protocols in place.

As foreign ministers from the G7 group arrived in masks at the venue on Tuesday, they traded traditional handshakes with UK Foreign Minister Dominic Raab for an elbow or forearm "bump," underscoring the ongoing threat of the Covid-19 crisis.

The event will “bring together some of the world’s leading democracies for talks and decisive action on the most critical global issues,” the British Foreign Office said in a statement.

Topics on the ministers' agenda include relations with Russia, China, and Iran, the coup in Myanmar, the war in Syria and the situations in Libya, Ethiopia, Somalia, the Sahel and Western Balkans, according to the Foreign Office. 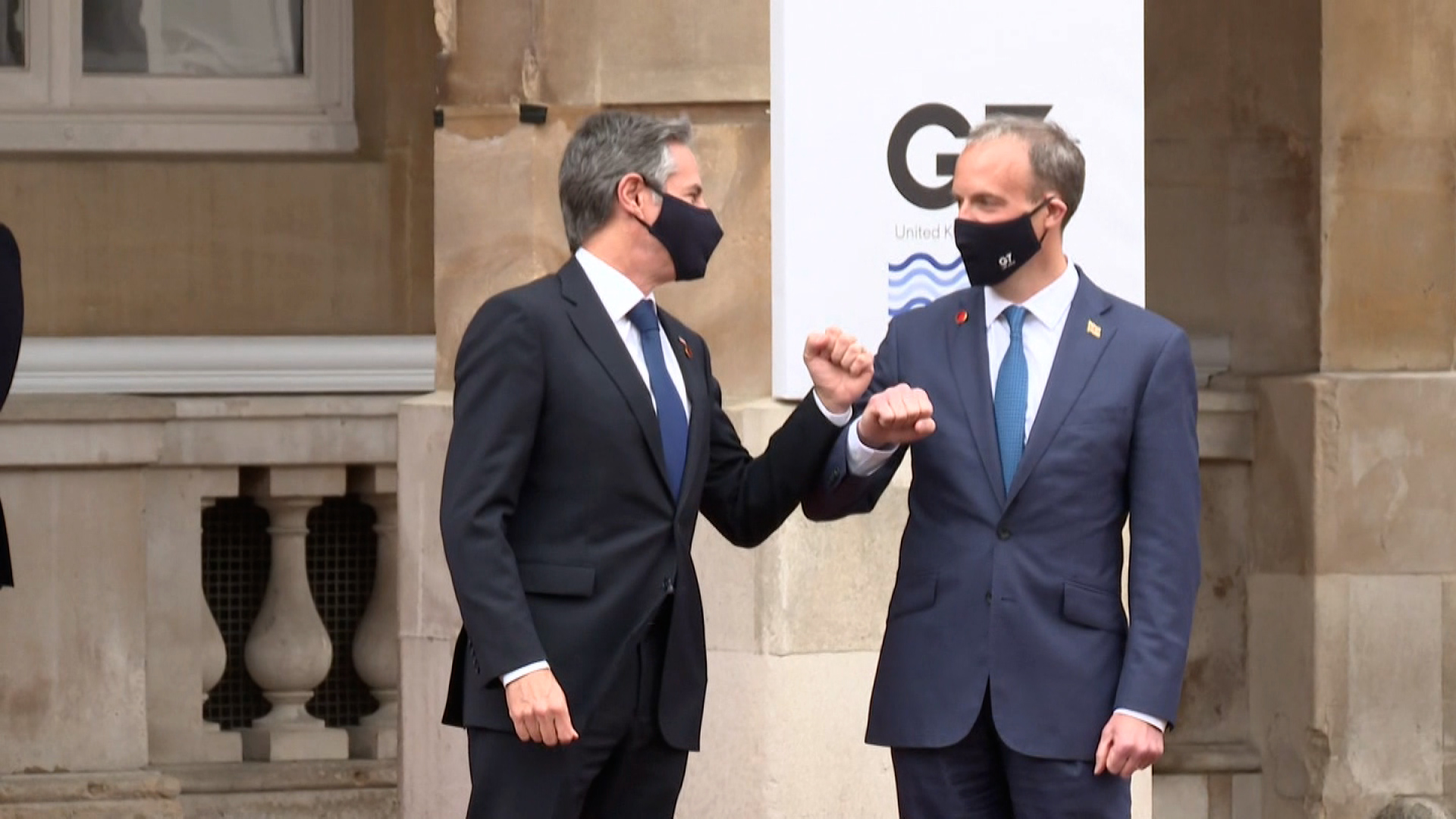