At least 173 unaccompanied minors are among more than 900 vulnerable Australian citizens trapped in India by their government’s ban on arrivals from the country, authorities said.

“In our database we have 173 clients registered as under 18 in India outside a family group, that is they are on their own and are seeking to return to Australia,” Department of Foreign Affairs and Trade official Lynette Wood told a Senate inquiry Friday.

The Australian government currently bars anyone from entering Australia if they have been in India over the past 14 days.

The ban came into effect on May 3 and will last until May 15.

The Australian government has said it will facilitate at least three flights to repatriate Australians in India between May 15 and 31.

There are at least 9,000 Australian citizens in India who registered with the government that they would like to return home.

Covid-19 has killed at least 366 doctors in Indonesia since March 2020, according to the latest data the Indonesian Medical Association's Mitigation Team released on May 3.

Sixty-four doctors in Indonesia died in January after contracting coronavirus, making it the deadliest month for doctors during the pandemic.

Indonesia is the world's fourth most-populous nation and has experienced one of the worst Covid outbreaks in Asia. More than 1.6 million cases and 46,000 deaths have been recorded since the pandemic began, according to Johns Hopkins University.

Earlier this week, Indonesia's Health Ministry confirmed two patients with the Covid variant B.1.617 first identified in India. The country has recorded a daily average of about 5,000 Covid-19 cases in the past week.

Authorities are concerned about the impact of the upcoming Mudik holiday, in which tens of millions of people travel to see their family in their hometowns to celebrate Eid al-Fitr, the end of Ramadan.

To halt the spread of Covid-19 during Eid festivities, the Indonesian government has banned all domestic travel from May 6 to May 17. The ban covers public and private journeys, including cars, motorcycles, buses, trains, ferries, ships and planes.

However, a poll from Indonesia's state-run Antara news agency found that an estimated 18 million people, or 7% of the population, are still planning on traveling for the Eid al-Fitr holiday despite the travel bans.

India reported 414,188 cases of Covid-19 on Friday, a new all-time high for the number of coronavirus cases in a day, according to figures released by the India's Health Ministry

To date, authorities have identified 21,491,598 cases in the country. Only the United States has had more.

Indian authorities also reported 3,915 another Covid-19-related deaths, making Friday the 10th day in a row the daily number of fatalities has exceeded 3,000.

At least 234,083 people have died after contracting the coronavirus in India.

As of Thursday evening local time, authorities had administered 164,876,248 vaccine doses, the Health Ministry said. A total of 32,845,736 people in India have received both doses of the vaccine -- about 2.5% of India’s 1.3 billion population.

Srinivas B.V. barely sleeps at night. His phone rings 24 hours a day with cries of help from Indians begging for oxygen supplies, ventilators, hospital beds -- whatever he can provide.

"If we miss a call, we call back and ask what we can do," said Srinivas, who leads the youth wing of the opposition Indian National Congress party.

Earlier this week, Srinivas and his team rushed an oxygen cylinder to the New Delhi home of a woman whose father was suffering from Covid-19. Despite their best efforts, the man died later that night. Scared, alone and Covid-positive herself, the woman had nobody to help cremate her father's body -- so Srinivas's team arranged an ambulance and facilitated the cremation.

Srinivas' phone rang as he spoke to CNN. It was Alok Kumar, a college professor who was frantically searching for oxygen for his Covid-positive 3-year-old son. The team rushes out the door again, an oxygen cylinder in the back of the car. 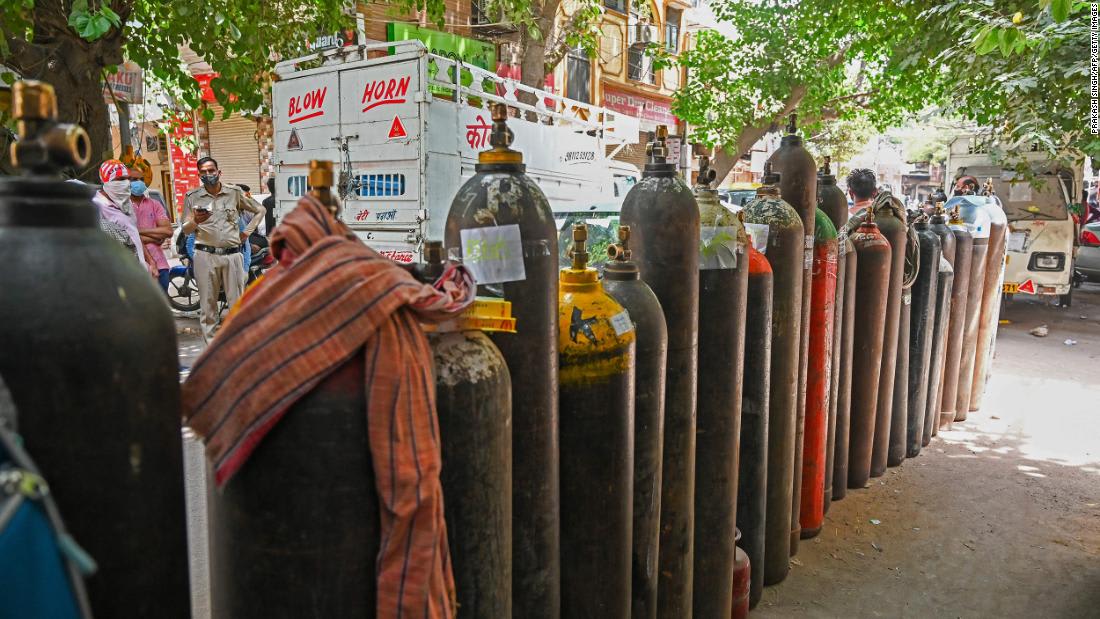 Australia will allow its citizens and permanent residents to return from India as of May 15, ending a controversial entry ban on anyone who has been in India over the past 14 days.

The ban is being enforced with a possible five-year jail term, a fine of $51,000 or both.

There are around 9,000 Australians in India who have officially informed the Australian government that they would like to return home, according to Prime Minister Scott Morrison. He said 900 of those people are classified as "vulnerable."

While commercial flights will not resume, Morrison said the Australian federal government will put on three repatriation flights between May 15 and 31.

Only Australia citizens, permanent residents and travelers from New Zealand can enter Australia, with few exceptions. All must undergo 14 days in state quarantine on arrival.

Around 40,000 Australians worldwide have told the government they want to return, with just over 5,000 places in quarantine available each week.

Morrison's government has denied criticism that banning entries from India alone was racist. The Prime Minister said Friday the entry ban “is working as it was intended to” in keeping Covid-19 out of Australia.

Brazil’s Health Ministry reported over 73,000 new Covid-19 cases on Thursday, raising the total number of cases to more than 15 million since the start of the pandemic.

While Brazil’s outbreak continues to be severe and its vaccine rollout slow, the country saw some hope on the horizon with the announcement that the government will purchase an extra 100 million Pfizer vaccine doses. The money for the acquisition was released this Thursday, and the new contract should be signed soon.

These doses are in addition to Brazil’s current contract to purchase 100 million doses of the Pfizer vaccine, one of four approved for use in the country.