Dr. Anthony Fauci, director of the National Institute of Allergy and Infectious Diseases, said on Good Morning America Tuesday that it is “perfectly reasonable and understandable” for businesses to keep mask mandates in some circumstances, as they can’t tell who is or is not vaccinated. But the inconsistency is causing some confusion, he said.

Fauci said the science that prompted the US Centers for Disease Control and Prevention to change its mask guidance related to evidence of the effectiveness of the vaccines in protecting against infection and also that the chances of a breakthrough case transmitting the virus is very low.

“The problem and the issue is that we don’t have any way of knowing who is vaccinated and is not vaccinated,” Fauci said. “And I think that’s where the confusion arises, because there are some establishments who’re saying well, ‘I’m going to have people coming into my establishment, my store, what have you, some are going to be vaccinated and some are not, I’m not going to know the difference. Some might be infected and might actually have a risk of infecting someone else.'"

“Under those circumstances, it’s perfectly reasonable and understandable for the owner of that establishment to say, you know, we’re going to keep the mask mandate up,” he continued. “And that’s what we’re seeing and I think that’s causing the confusion, because some are maintaining a mask mandate and others are not.”

India’s Prime Minister Narendra Modi pledged an increase in Covid-19 vaccines on Tuesday as several states flagged shortages in supplies and the country reels from its second wave of the virus.

“Efforts are being made to increase the supply of Corona vaccines on a very large scale,” Modi said, according to a statement from the Prime Minister’s office.

Individual states became more vocal about upcoming vaccine shortages after the national rollout was expanded to all over-18s on May 1. Before the second wave hit India in late April, vaccines were only available to people aged 45 and above.

However, Modi said Tuesday that attempts were being made to speed up the vaccination schedule to states in the coming days.

It was the second time Modi has spoken on the Covid-19 crisis this month, after remaining silent on the matter for three weeks. He asked for oxygen plants to be installed in hospitals in every district in the country and asked states where infections are decreasing to continue to be vigilant.

Officials “informed (Modi) about the efforts being undertaken to augment the medical infrastructure and capacity building in rural areas,” and Modi asked officials to make relief material easily accessible to rural areas, according to the Prime Minister's office.

Modi said that "“(t)he fight is to save every single life.”

On Monday, India was hit by the strongest storm on record to reach its west coast, hampering authorities' response to Covid-19 in some of the country's hardest hit regions. Though daily cases have been declining in the last week, Covid-related deaths continue to reach record highs and the crisis is far from over.

An Israeli airstrike damaged one of Gaza's main coronavirus testing centers on Monday, the Hamas-run Ministry of Health in Gaza said.

Video showed the windows of the Al-Rimal Martyrs’ Clinic blown out following the strike. At least two floors of the building were destroyed, according to a CNN journalist on the scene. The Qatari Red Crescent reported damage to its office inside the building.

The Palestinian Authority Ministry of Health in the West Bank condemned the strike and said that its local administrative office was also damaged.

A spokesperson for the Israel Defense Forces told CNN on Tuesday the strike was targeting Hamas’ internal security forces in a nearby building.

Taiwan reported 245 new Covid-19 cases on Tuesday, a day after the democratically-ruled island off the coast of China saw its highest single daily rise of infections since the start of the pandemic.

Of the 245 cases, 240 were locally transmitted and 5 were imported, the island's Central Epidemic Command Center (CECC) said in a press conference Tuesday. The locally transmitted cases are concentrated in the capital Taipei, where many are linked to hostess teahouses, and the surrounding New Taipei City, the CECC said.

Widely praised as a success story for its handling of Covid-19, Taiwan is now fighting its biggest outbreak yet.

In response, Taiwanese authorities have imposed new social distancing measures, closing bars, clubs and gyms around the island, restricting indoor gatherings in Taipei and New Taipei City. On Tuesday, the Ministry of Health announced that all schools in Taiwan would be suspended for 10 days starting Wednesday in an attempt to stem the surge in cases.

Since the onset of the pandemic Taiwan has reported a total of 2,260 Covid-19 cases, of which 1,086 were imported and 1,121 were locally transmitted.

With just two months until the Tokyo 2020 Games begin, a major Japanese doctors' group is calling for the delayed event to be canceled over fears that the influx of people will exacerbate an already worsening outbreak in the country.

The Tokyo Medical Practitioners Association warned that the country's healthcare system could not cope with the medical needs of thousands of athletes, coaches and press on top of the existing surge in Covid-19 cases.

"The most important priority now is to fight against COVID-19 and to secure people's lives and livelihoods. The virus is spreading with the movement of people. Japan will bear a big responsibility if the hosting of the Olympic and Paralympic Games contributes to the spread of COVID-19 and increases the number of sufferers and deaths," the association said in a letter sent to Japan's Prime Minister, the minister for the Olympic games, Tokyo's governor and the Japanese Olympic committee chairman.

The association is at least the second group of Japanese doctors to demand that the Olympics and Paralympics be cancelled, as opposition to the Games mounts.

Last week, members of a national doctors' union presented a written request to Japan’s Health Ministry calling for the Prime Minister to cancel the Games. “It’s tough for the athletes but someone has to say that the Games should be canceled. We made the request (to the government) as we think medical workers have to speak up,” said Naoto Ueyama, the head of the union, in a press conference on Thursday.

A petition calling for the cancellation of the Tokyo Olympics which garnered 350,000 signatures in nine days was submitted to organizers on Friday and protests were held in Tokyo Monday night.

However, Olympic officials maintain the Games, scheduled for July, can be held, with World Athletics president Seb Coe saying he is confident the Tokyo Olympics can be held in a safe way.

"Should we have the Games? Yes, we should. Can we have them safely and secure? I believe we can," Coe, a four-time Olympic medalist and president of World Athletics since 2015, told CNN Sport on Monday.

India was slammed on Monday by the strongest storm on record to reach its west coast, hampering authorities' response to the Covid-19 crisis in some of the country's hardest hit regions.

Tropical Cyclone Tauktae, a storm with wind speeds equivalent to a high-end Category 3 hurricane that formed in the Arabian Sea, made landfall Monday night local time in Gujarat. It strengthened slightly as it hit the western state with maximum sustained winds of 205 kilometers per hour (125 mph), according to the United States' Joint Typhoon Warning Center.

Photos and videos show highways turned into rivers by the heavy rain, and trees and power lines toppled by ferocious winds. The cyclone has killed at least 26 people across the coastal states of Gujarat, Kerala, Karnataka, Goa and Maharashtra, according to state authorities.

This comes as India reels from its second wave of coronavirus, which has infected millions and killed tens of thousands since it began in mid-March. Though daily case figures began declining over the past week, Covid-related deaths continue to break record highs and the crisis is far from over -- especially in rural areas with fewer resources and medical supplies.

Covid patients were among the hundreds of thousands evacuated from low-lying areas this week as the region braced for the cyclone's arrival. In Mumbai, 580 patients from makeshift care centers were moved to various hospitals on Friday and Saturday, according to the city's municipal corporation. 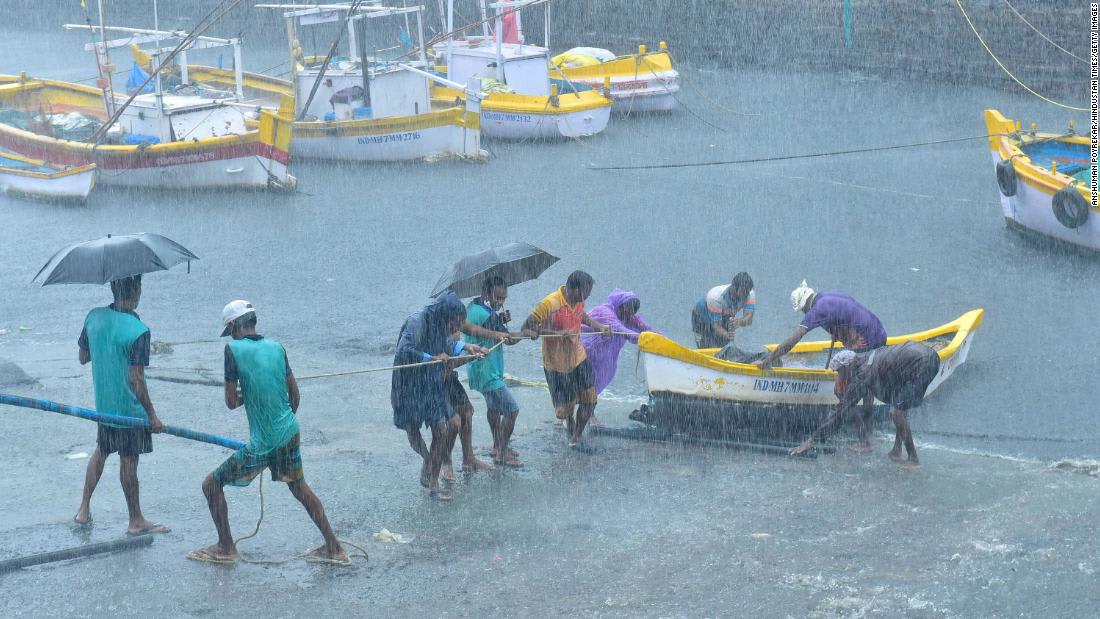 Taiwan will close all schools and education centers for 10 days amid a rapid rise in Covid-19 cases, the Ministry of Health announced Tuesday.

"Because of the raising of coronavirus alert levels in Taiwan, and in order to reduce the infection risks for gatherings, all the schools and kindergartens will stop in-person learning from May 19 (Wednesday) to May 28 (Friday) and education facilities like daycare centers and cram schools will need to stop in-person classes too," the ministry said on Twitter.
"All the students please study at home,” it said.

In Taipei and New Taipei, all schools and kindergartens were already closed for two weeks starting Tuesday, while several local councils have also been suspended.

At least two districts in Nepal do not have enough Covid-19 test kits to test all Nepali nationals entering the country from India, district officials told CNN.

Nepal’s Kailali district in Sudurpashchim province, which borders India, has not been able to test all Nepali nationals entering from India for coronavirus due to a lack of test kits, according to Assistant Chief District Officer Hira Lal Chaudhary.

Since India's second coronavirus wave, around 23,000 Nepalis have returned from India through Kailali. Among them, about 20,000 have been tested, said Shiva Raj Joshi, an official at the Kailali District Administration Office.

Up to to 800 Nepali migrant workers enter Nepal from India each day through the Gauriphanta entry point, which lies in between the districts of Kailali and Kanchanpur.

Nepal’s Kanchanpur district is also facing an acute shortage of Covid-19 test kits. The Gaddachauki entry point, which is one of 13 border points currently opened for Nepali nationals to cross from India, is located in Kanchanpur.

“Some 700 to 800 Nepalis enter Nepal through this entry point each day. We are able to conduct tests of only about 20% of those entering Nepal from India,” Chief District Officer of Kanchanpur Ram Kumar Mahato told CNN.

Nepali nationals started returning home from India after they lost their jobs as a result of the second wave and regional lockdown measures, Mahato said.