The Covid-19 pandemic would have been “extraordinarily different” if the United States had stronger public health infrastructure, US Centers for Disease Control and Prevention Director Dr. Rochelle Walensky told a Senate committee on Wednesday.

Walensky spoke in response to a question from Sen. Patty Murray, a Democrat from Washington, on how things would have been different in the US had the country invested in tools such as genomic sequencing capabilities earlier.

“I think the testing – the inability of our public health systems to be able to conduct these tests in massive scale – didn't allow us to find the disease where it was. Certainly we hadn't done genomic sequencing until January,” Walensky said.

“We didn't know anything about the variants that were circulating here. There are numerous ways that this could have gone better if we had had a more robust public health infrastructure across all of those domains," she added.

Programs and facilities must collect vaccination status of all staff and children and implement mandatory health screening practices of staff and visitors, including temperature checks, according to a statement from Cuomo.

“Children and campers over the age of two and staff who are not fully vaccinated must wear face coverings except when eating, drinking, showering, swimming, or sleeping/resting,” the statement said.

It adds that “facilities and programs must provide and require the use of face coverings for individuals who are not fully vaccinated.”

Each site must also implement a property specific limitation for children and campers that ensures social distancing, and staff that are not fully vaccinated must maintain a 6 ft. distance from other unvaccinated staff, the release said.

The country has been thrown into political turmoil after Prime Minister K. P. Sharma Oli was forced to step down a week ago following public anger over his response to a deadly second wave of coronavirus.

Just a month ago, the Himalayan nation of 31 million people was reporting about 100 cases a day, but now cases are skyrocketing and hospitals are becoming overwhelmed.

Ensemble forecasts published Wednesday by the US Centers for Disease Control and Prevention project that the number of newly reported Covid-19 cases, hospitalizations and deaths will likely continue to decrease over the next four weeks.

The previous ensemble forecast, published May 12, projected up to 602,000 deaths would be reported by June 5.

Several Indian states are facing a shortage of an antifungal drug used to treat Black Fungus, or Mucormycosis, a disease Indian Health officials have increasingly been detecting among patients who have recovered from Covid-19.

At least 52 people have died from Black Fungus in the state of Maharashtra, where the disease is on the rise among patients who have recovered from Covid-19, Dr Tatyarao Lahane, a senior state health official told CNN on Wednesday.

At least 2,000 cases of Black Fungus have been detected in Maharashtra, according to a statement from the Ministry of Health on Friday.

“We are now getting 100 cases daily on average...there was a shortage (of the drug for treating black fungus) initially because it was not expected, but that’s been resolved now, 16,000 doses arrived just yesterday,” Lahane added.

Maharashtra’s health minister Rajesh Tope said last Wednesday an order had been placed for 100,000 vials of Amphotericin B, a drug used to treat Black Fungus.

“There are very few districts where there aren’t patients (of Black Fungus),” Tope also said, as states across the country, such as Uttar Pradesh, Maydhya Pradesh, Delhi and Telangana have made appeals for deliveries of the drug as they face shortages.

“Currently there is a sudden demand surge,” a statement from the Ministry of Chemicals and Fertilizers said on Tuesday, adding that “the Government is committed to making all possible and necessary efforts to make it available to needy patients...the shortage is expected to get resolved at the earliest.”

The western Indian state of Gujarat is also facing an increase in Black Fungus cases. The local government has placed an order for 100,000 vials of Amphotericin B and Liposomal injections used to treat the disease, after Gujarat’s High Court issued an order on Monday noting “the rapid increase in the cases of flesh eating Black Fungal infection called ‘Mucormycosis’".

“The shortage of injections being administered for the said disease and the cost of its treatment are also the issues which deserve to be seriously and immediately considered by the State,” the order added.

Mucormycosis is commonly found among patients of diabetes or those with weakened immune systems. While the disease is not caused by Covid-19, Indian health officials have increasingly detected it among Covid-19 patients, according to a statement from the Ministry of Health on Friday

“This fungus infection is caused by a fungus called mucor...it is found on wet surfaces...when there is uncontrolled diabetes mucor attacks,” V K Paul, head of India’s covid task force said on Friday.

“If someone has a disease or takes medication which suppresses the immune system. or is exposed to wet surfaces they can contract the disease…(for Covid-19) we are using drugs which suppress our immune system...when Covid-19 patients receive oxygen which has a humidifier which has water collection which can increase the tendency of the fungus,” Paul added.

Dr. Anthony Fauci, director of the National Institute of Allergy and Infectious Diseases, told Axios that people are “misinterpreting” the US Centers for Disease Control and Prevention’s new mask guidance by thinking the guidelines say no one needs to wear a mask.

“I think people are misinterpreting – thinking that this is a removal of a mask mandate for everyone. It’s not,” Fauci said. “It’s an assurance to those who are vaccinated that they can feel safe, be they outdoors or indoors.”

Fauci said that this wasn’t their fault.

“People either read them quickly, or listen and hear half of it. They are feeling that we’re saying: ‘You don’t need the mask anymore.’ That’s not what the CDC said. They said: If you are vaccinated, you can feel safe – that you will not get infected either outdoors or indoors. It did not explicitly say that unvaccinated people should abandon their masks.”

The European Union will begin to ease travel restrictions to the bloc, with the EU Council agreeing on measures to allow fully vaccinated foreign visitors in.

The bloc's 27 ambassadors green-lit a plan to implement waivers for vaccinated people and relax criteria to lift restrictions for third countries on Wednesday. The proposal also includes an emergency brake mechanism that would allow the EU to react quickly to variants of interest or concern, an EU Portuguese presidency spokeswoman said on Twitter.

An EU official told CNN that if member states accept proof of vaccination to waive travel restrictions, such as testing or quarantine, they should in principle lift restrictions on non-essential travel for third-country visitors. The EU will also take into account reciprocity, according to the EU official, who asked not to be named as the recommendation had not yet been adopted.

The EU Council is expected to formally adopt the recommendations, which are not legally binding for member states, on Thursday, the EU official added.

Kenya is just days away from running out of Covid-19 vaccines with only about 100,000 AstraZeneca doses left, the country's health minister Mutahi Kagwe told CNN, blaming vaccine nationalism for eroding supply chains and triggering shortages.

"As a continent, we must stop believing that there is anybody out there who is a Good Samaritan, a biblical Samaritan who is just about to come and help us. It's everyone for himself or for herself," Kagwe said. "Going into the future, the local production, local manufacturing of pharmaceutical commodities and products is an absolute must."

Many African countries like Kenya had relied heavily on vaccines from the global vaccine sharing initiative, COVAX, which largely depended on vaccine supplies from the Serum Institute of India (SII), the world's largest vaccine manufacturer. But a vicious second wave of coronavirus in India has led to an export restriction by the country, and the SII said Tuesday they will be unable to ship vaccines until the end of 2021.

To cope with shortages, Kenya's health ministry will take back doses from regions where uptake has been slow and redistribute them to begin the process of second jabs by the first week of June. Kenya is expecting an additional 150,000 doses from neighboring countries like the Democratic Republic of Congo, where there is no capacity to administer doses before they expire in June.

"We are still vaccinating, but we are at the tip, we need vaccines like, yesterday," Kagwe said.

Less than 2% of Kenya’s population of more than 52 million have had their first shot, according to Our World in Data.

After ongoing delays in shipments from India, AstraZeneca's Covid-19 vaccine is unlikely to remain the "vaccine of choice for the African continent," Kagwe said.

"It is very likely that we are going to discuss and agree on Johnson & Johnson. First it is being produced here in Africa and secondly, there is an arrangement for a number of doses that are going to come to (the) Africa platform."

Kenya has ordered 30 million vaccines from Johnson & Johnson. The health minister hopes the majority of the adult population will be vaccinated by next year, urging, "the sooner we have our 30 million doses, the sooner we finish."

Leaders across the globe have decried the inequity of vaccine nationalism in light of Africa having only carried out fewer than 1% of the global vaccinations, according to the WHO.

On Tuesday, French President Emmanuel Macron said the setup was "unfair and inefficient" and called for patents on vaccines to be lifted so countries in Africa could manufacture them locally.

While many African nations are still struggling to get enough Covid-19 vaccines to protect their populations, those that have managed to shore up doses are struggling to administer them in time. Now they're facing the bitter reality of having to destroy thousands of expired doses.

South Sudan has announced plans to discard about 59,000 of 191,000 doses of the AstraZeneca vaccine it received in donations. In Malawi, at least 19,000 expired doses of the AstraZeneca vaccine will be publicly incinerated on Wednesday, the country's health ministry said in a statement to CNN. Meanwhile, more than 1 million AstraZeneca doses acquired through vaccine-sharing facility COVAX have been returned by the Democratic Republic of the Congo (DRC), following concerns that the shots may expire before they make it into arms.

A spokesperson for GAVI, the vaccines alliance that runs COVAX with the World Health Organization, told CNN that vaccines were only delivered through the scheme to countries who were ready to hit the ground running with immunizations and that all COVAX participants were informed of vaccine expiry dates in advance.

But African nations trying to scale up rollouts against the backdrop of weak health infrastructures, hard-to-reach rural areas and vaccine hesitancy are facing an uphill battle.

WHO told CNN that the destruction of expired vaccines was "deeply regrettable," especially in a context where doses are already scarce. But that the move was ultimately justified, especially in trying to build confidence among the public that vaccination programs are safe and effective.

"Discarding vaccines is deeply regrettable in the context of any immunization program," said Kate Ribet, spokesperson for WHO Africa's Covid-19 vaccine rollout.

"However, given the complex process required to verify their stability, and the risk of negative perception related to the use of expired doses, WHO recommends that COVID-19 vaccines already in the distribution chain should not be used beyond their labeled expiry date and should be safely disposed of."

Read more about the African nations having to dispose of Covid-19 vaccines: 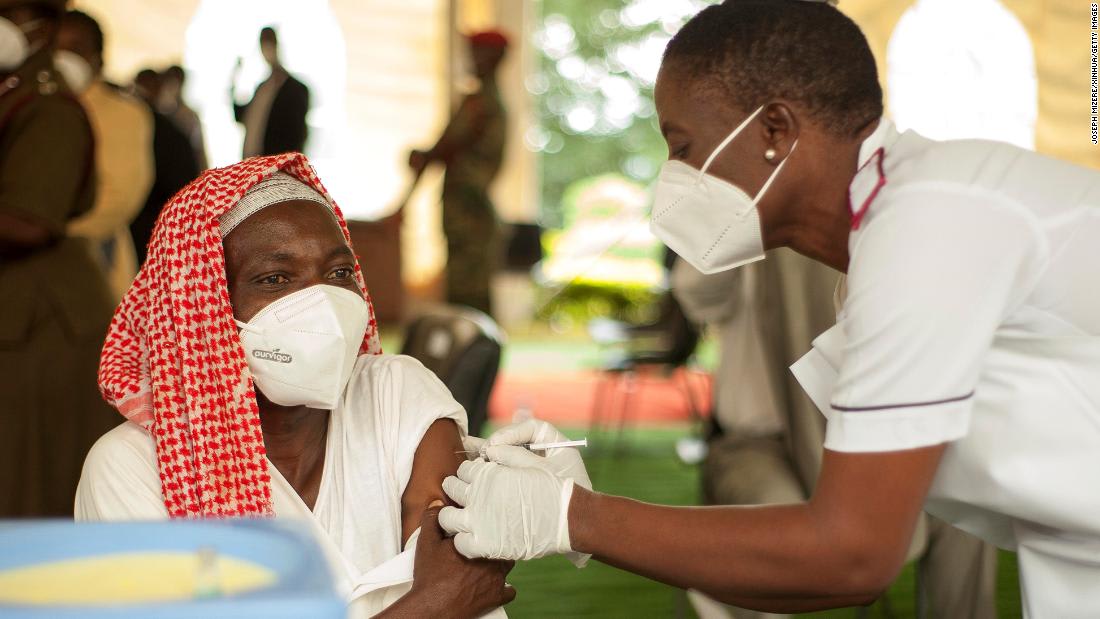 African countries have struggled to secure enough Covid-19 vaccines. So why are thousands of doses going to waste?